Neither a good Paul Newman nor a bad Tom Hanks can save this dreary art-house flick from the airless grip of "American Beauty" director Sam Mendes. 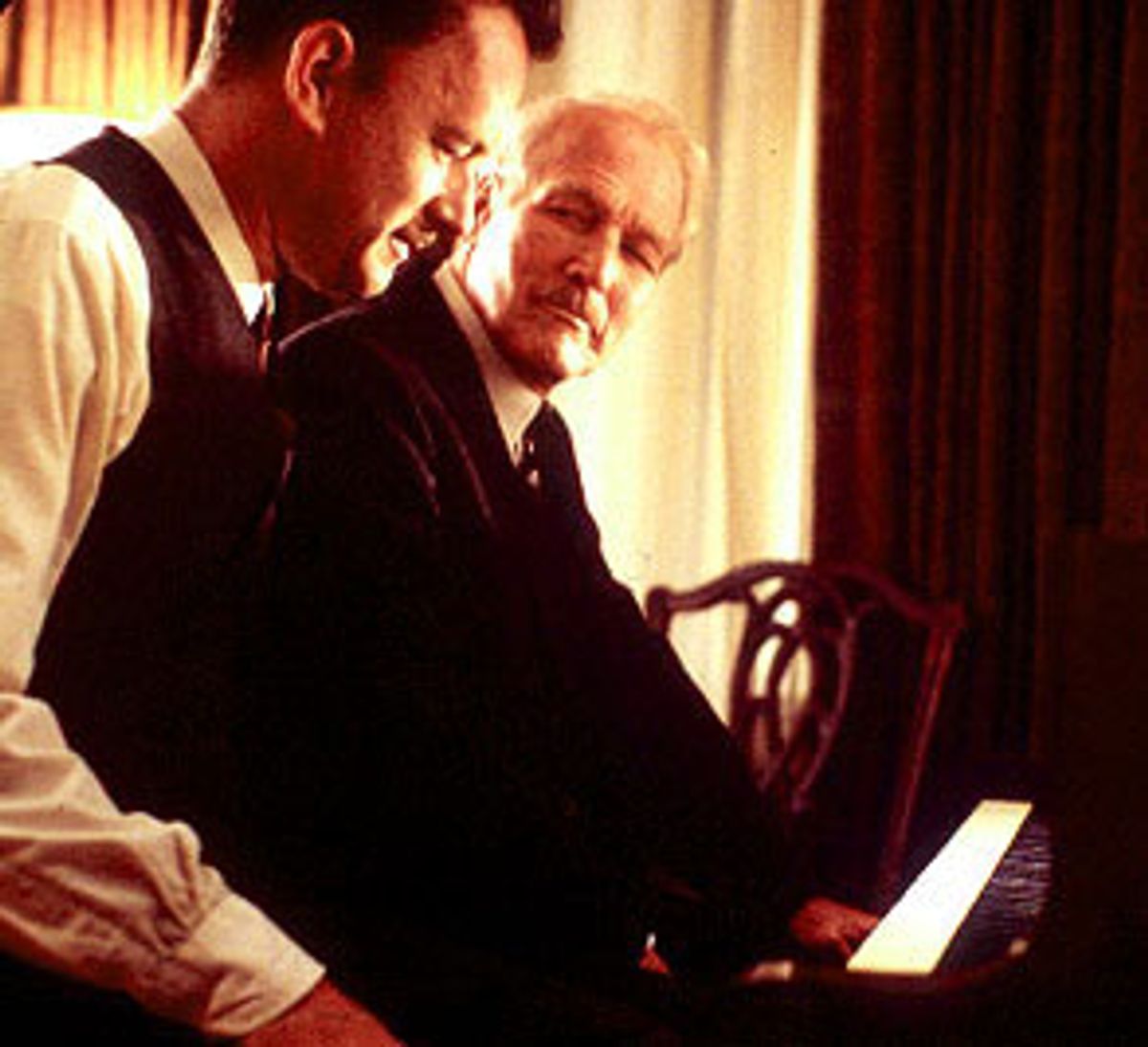 Sam Mendes' "Road to Perdition" is a cinematic achievement; it doesn't deign to be anything as alive as a movie. The opening credits tell us that the picture was based "upon" a graphic novel, and it's clear the simpler preposition "on" wouldn't have sufficed -- it's too colloquial, too much like the way people actually talk. "Upon" aspires, and every frame of "Road to Perdition" strives to live up to the word's phony superiority. Over and over again, Mendes confuses gracefulness with tastefulness: He loads up on the latter, not realizing that a great movie is a kind of dance, not a perfectly executed dinner party.

You could forgive Mendes if he simply didn't understand movies; there are plenty of directors who understand them perfectly well and make bad ones anyway. But "Road to Perdition," like his "American Beauty" before it, feels like a movie that keeps wishing it were something else: an award-winning play, a grand novel, an epic poem, anything but that populist thing we call a movie. Mendes makes movies as if he hates them.

"American Beauty" dipped a dainty toe into the murky secrets that lay beyond the manicured lawns of the suburbs, which is to say that it barely touched them at all. Mendes' suburbs looked and felt like a place he had never actually lived in or even been to. Worse, they represented a place he didn't particularly care about. For Mendes, the deepest troubles of those suburbanites were just the means to a memorable image: a splendid rose-shaped splotch of blood on a wall, formulated to drip at just the right velocity -- oh, the humanity!

In Mendes' world, every character deserves his or her own art-directed stain, and there are plenty in "Road to Perdition." A young boy named Mike Sullivan (Tyler Hoechlin) witnesses a brutal murder at the hands of his father, Michael Sr. (Tom Hanks), a hit man for the Irish mob in Depression-era Illinois. That sets off a series of brutal (but tastefully presented) events that force Mike and his father to leave their home, robbing banks in order to force a deal with the gangsters who are pursuing them (although they make it a point to steal only dirty money, deposited by the henchmen of Al Capone). Their biggest enemy is the man who was previously their greatest friend, Michael Sr.'s former boss, John Rooney (Paul Newman). Rooney is the head of the mob family and thus controls the whole town; he had always treated Michael like a son (and young Mike like a grandson), much to the dismay of Rooney's real son, Connor (Daniel Craig).

As Mike and his dad rob, plunder and make a stop at -- no kidding -- an idyllic farm owned by a kindly, childless couple, they're trailed by a depraved photographer-slash-hitman played by Jude Law. We know he's bad not only because he likes to take pictures of corpses, but because his teeth are a row of tiny brown-edged tiles, like antique Chiclets.

There's much shedding of blood in "Road to Perdition," but almost all of it is off-camera, neatly represented by the blam of a gun and a sudden carmine-toned spray. (I'm afraid I couldn't identify the exact shade, as I didn't have my Pantone book handy.) This is responsible bloodshed, presented not for our delectation, but for our esthetic consideration; that distinction makes it all perfectly OK.

There's no mess in "Road to Perdition," either visually or morally. Mendes clearly wants to tangle with a complicated theme -- Can a killer be a decent human being? -- but he doesn't want to get himself worked over in the process. He also struggles, like a gentleman wrestler in tights and an ear guard, with complex family conflicts, most notably the stress cracks between fathers and sons that start out small and grow to world-shattering proportions. Mendes seems to be under the impression that his story is more morally complex than it is; even so, he never adequately addresses the crucial moral questions the story raises.

Hanks plays the lone, tight-lipped virtuous man whose decency is supposed to shine through no matter what. The fact that for years he's been "forced" to kill in order to support his family is treated as inconsequential. He's like a Western hero who wants to teach his son that killing is bad, even as he picks off, one by one, the various people who have destroyed his family. It's a vigilante movie made for arthouse audiences, separating us comfortably both from the violence and the motivations behind it, instead of making us feel complicit. We don't leave the theater feeling dirty -- in other words, bearing some of the movie's moral weight -- we walk out with a nice little morsel of souvenir virtue.

All the actors save Newman (who retains both his dignity and his flexibility in every one of his scenes) recite their lines with the self-assurance of people who know they're performing in a Very Important Picture. Mendes made his name as a theater director before shifting into movies, and you can't help wondering if he isn't largely responsible for the woodenness of his actors here. Hoechlin opens and closes the movie with a heavy-handed voice-over that no actor could deliver believably, and in between, as well, he's all self-conscious stiffness.

Hanks is a tougher case: His great tragedy is that he doesn't realize that he's a brilliant actor when he keeps things light and tossed-off, as he did in his early comedic roles and also in the more recent "Cast Away." (The latter was a very serious role, but Hanks never let it plow him under; every time you thought he'd sunk for good, he'd bobble up to the surface.) But here, Hanks doesn't even deliver one of his stock overblown, actory roles (as he did in, say, "Apollo 13"). He's a bleary, watery nonpresence, a man who surely has his inner conflicts but doesn't have the means to show them to us. Those conflicts seem to be held hostage by the movie's stylishness. Hanks, too canny an actor to know he couldn't play over that stylishness, may have subconsciously decided to submerge them, but ends up sinking them into nonexistence. We know Michael Sullivan suffers because the story tells us he does, but we can't really see it in Hanks' eyes.

But then actors represent the last thing that Mendes would allow to stand in his way. He's more concerned with the movie's look and, more important, its monotonously orchestrated tone. "Road to Perdition" is graphically meticulous to the point of absurd deliberateness -- when a gangster takes a drag on a cigarette, the plumes of smoke that wreath his head look as if they'd been called in from central casting. ("We want something round, not too wispy, with a little curlicue at the end.")

"Road to Perdition" was, of course, based on a graphic novel (it was written by Max Allan Collins and illustrated by Richard Piers Rayner), and so Mendes frames his shots, most of them composed to the point of being embalmed, with the telegraphed shorthand of comic book panels. We're always acutely aware of the artfulness of those shots: When we see that "Diner" sign shining in the left background, while a shadowy character stands menacingly in the right foreground, it's our signal to genuflect at Mendes' marvelous use of American pop-culture iconography. Shot by Conrad L. Hall, the whole movie is done up in the hushed, grayed tones of comic-book ink: All dark mahogany and slanting sheets of rain, the movie's look definitely sets a mood, but it also announces its presence, scene by scene, as a heavily conscientious choice. Its deliberateness becomes oppressive.

Some would claim that at the very least Mendes has a good eye. I'd say he has one eye: Both his movies have a distinctive look, but there's also a sharp yet chalky flatness to them. But the bigger problem I've had with Mendes is that I've never been able to locate his heart. The fact that he's a stylish filmmaker isn't the problem. There are many ways for love to leak out into the world, but the slyest and most underrated of those routes is stylishness. In movies, that stylishness can be subtle, like Jean Renoir's or Satyajit Ray's, or vivid, like Brian De Palma's. But I can't find any love in Mendes' movies: no love for the characters, no love for the art form and certainly no love for the audience. One eye and no heart is no way to go through life, and it's no way to make a movie, either.