"My Wife Is an Actress"

Charlotte Gainsbourg stars in a slight French charmer that asks the question: When she kisses that hot guy on-screen, is it for real? 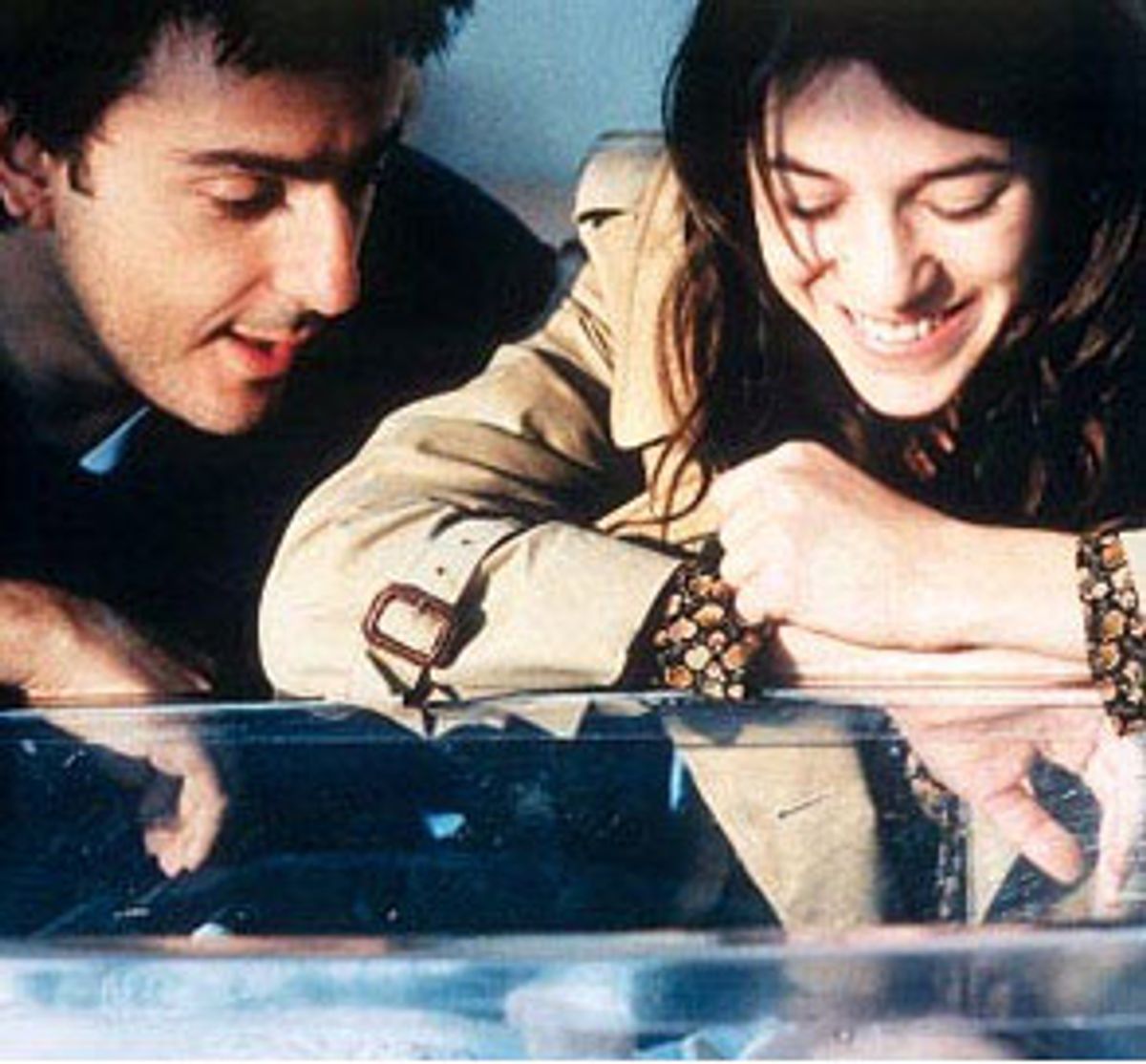 The French comedy "My Wife Is an Actress" deals with a very particular form of sexual jealousy, that of a sportswriter who can't stand watching his film-actress wife in her love scenes. The movie's art-imitates-life fillip is that the writer-director Yvan Attal stars as the sportswriter, whose name is Yvan, and Attal's real-life spouse, Charlotte Gainsbourg, plays his actress wife, whose name is, yes, Charlotte.

Attal manages to avoid any voyeuristic ickiness. There's never a sense that he's seriously airing his marriage's dirty laundry in public. But the picture, which is pleasant enough to watch, never goes into the subject in more than cursory fashion. At times it resembles one of those frothy French sex farces (like "Pardon Mon Affaire") that were so popular with American art-house audiences in the '70s. At other times it seems like Attal is trying for something like the comedy of male attitudes toward women that has long been Bertrand Blier's special province. The combination doesn't gel. What the picture lacks -- and what it sorely needs -- is Blier's mixture of daring and whimsy, the sort of thing that stays charming as it gets wilder and wilder.

It's too bad because it's a potentially great comic subject, a sex comedy that takes off from the question of how much of what we see in the movies is real. Early on, Yvan, who suffers through the fans and autograph seekers Charlotte attracts wherever they go (she's gracefully unfazed at the attention), meets a doctor who asks him how it feels to have a wife who sleeps around. To the doctor, Charlotte's love scenes are the same thing as being unfaithful. The guy's an ass, but when Yvan tries to tell him that Charlotte's sex scenes are no more real than a scene where an actor is gunned down, the doctor knows -- as we in the audience know -- that it's not a good answer. The fights for love and glory are staged. But a kiss is still a kiss.

Most of us have had dates ruined by a companion, to our immense annoyance, sighing lustfully over some gorgeous person up there on the screen. And Yvan has to watch his wife actually performing love scenes with those stars. (I have to admit finding that kind of thinking alien. If you don't want to enjoy looking at beautiful people, you shouldn't go to the movies.) When Yvan tries to question Charlotte, she tells him stories of having to canoodle with actors who emit sewer breath early in the morning. Well, he asks, what if she has to kiss Robert De Niro at 8 a.m.? In that case, she answers truthfully -- and not at all to her husband's liking -- she loves her job.

Attal wants to use the particulars of Charlotte's job as a stand-in for the danger that sexual attraction to other people can pose to a marriage. It's a promising comic subject because there are so many people, men as well as women, who think marriage should mean never finding someone else attractive. It's promising as a movie satire as well. Who knows how many show-biz marriages have broken up because of what one spouse thinks is going on during a love scene? Just a few years back, the tabloids ran a story about the wife of a sitcom star getting her husband's co-star fired because she didn't like the chemistry they struck in their scenes.

Like that woman, Yvan is a big baby. He tells people that he's not bothered by Charlotte's love scenes because they're just part of her job. He's not very convincing. He pesters her about her attraction to her costars. He wants the truth and he doesn't want the truth. Yet he holds up the fact that he resists the advances of a shapely young thing in his office (who's attracted to him largely because he's got a famous wife) as proof of his sterling virtue.

It takes a special actor to make male romantic foolishness appealing. (The late Patrick Dewaere, who had the tentative muzziness of a big bunny rabbit, was superb at it.) Attal isn't one. A ringer for Griffin Dunne, he shares Dunne's peculiar affect -- and smug and nebbishy aren't a great combination. Yvan is deeply, deeply silly. He's like a high-school boy who goes to pieces because his girlfriend is assigned the captain of the football team as a lab partner. But something in Attal resists allowing himself to look foolish. He prefers pathos, but there's no pathos in someone who's not secure or mature enough to accept the facts of life.

What Attal does behind the camera is much more interesting. The interplay between illusion and reality in movies has often been seen as a far deeper subject than it really is. (Thirty-six years later, does anybody really give a rat's ass about whether or not there was a tennis ball at the end of "Blow-Up"?) But Attal provides some tasty and playful riffs on the "reality" of movies. During one of the couple's arguments, Charlotte tells him that movie kisses aren't real, and as she says it they pass a snogging couple, a comic Brechtian touch.

At another moment a close-up of Charlotte's face as she's making love mirrors one of the movie love scenes Attal has shown us -- and then the camera pulls back and shows her making love with Yvan. It's both fiction and fact, a made-up scene with husband and wife playing ... husband and wife. (It's also sweetly amusing that Charlotte's "je t'aime" sounds very much like her real-life mom, Jane Birkin, moaning in the heavy-breathing classic "Je t'aime," as performed by her dad, French pop idol Serge Gainsbourg.) Moments like that made me anxious for "My Wife Is an Actress" to go further than it does. But whether out of timidity or inexperience (this is Attal's first film as director and he's set himself the tough task of wearing three hats -- director, writer and star), it stays merely diverting.

The slyness the movie needs comes from Terence Stamp as Charlotte's English co-star, John. Like Sean Connery and Paul Newman, Stamp is one of those men who's gotten better looking with age. (How many men put themselves to bed each night with the prayer, "Please, God, let me age as well as Terence Stamp"?) Stamp's character is a real gent. He never makes an untoward advance, but his solicitousness has a roguish undertow. There's a charming moment when, after she's told him she misses Paris, he sends her a snow shaker of the Eiffel Tower. John is letting Charlotte know that he won't press it but, if she wants, he's hers for the asking.

Stamp doesn't give a laugh-out-loud performance, but more the kind that makes you sit there with a big grin. Just about the best moment -- and the one that shows us how little Yvan understands -- comes when Charlotte and John have their first screen kiss. When it's over, the two of them stand there, lingering in the moment, enjoying it. Who can blame them? That's what happens in acting: You're swept into a scene and it's not always easy to come out. And why, for God's sake, shouldn't any woman enjoy kissing Terence Stamp?

Despite the wobbly tone, and the ambiguity that hangs over the last section of the movie (especially the pat ending), "My Wife Is an Actress" is a light, enjoyable night out. This happens largely because of Charlotte Gainsbourg, who's simply adorable. Attal shoots her with tenderness throughout, a tenderness that comes from familiarity. The moments in the movie when you feel you really learn something about the duo's actual marriage are the moments when the camera simply regards Gainsbourg.

As an adolescent, in movies like Agnès Varda's "Kung Fu Master," Gainsbourg was awkward and gawky. She's grown into her features. Her long face compliments her skinny frame. There's a trace of melancholy about her, but above all an appealing lightness. At times she barely seems to be doing anything but she's never less than appealing. Gainsbourg combines the sensitivity of an adolescent with the grounded quality of a grown woman. There isn't a moment in the movie when we're not on her side. When Attal, as director, allows his camera to drink her in, he seems to be asking, "How'd I get so lucky?" Would that the character he plays in the film showed as much grace.