Capitalists without a clue 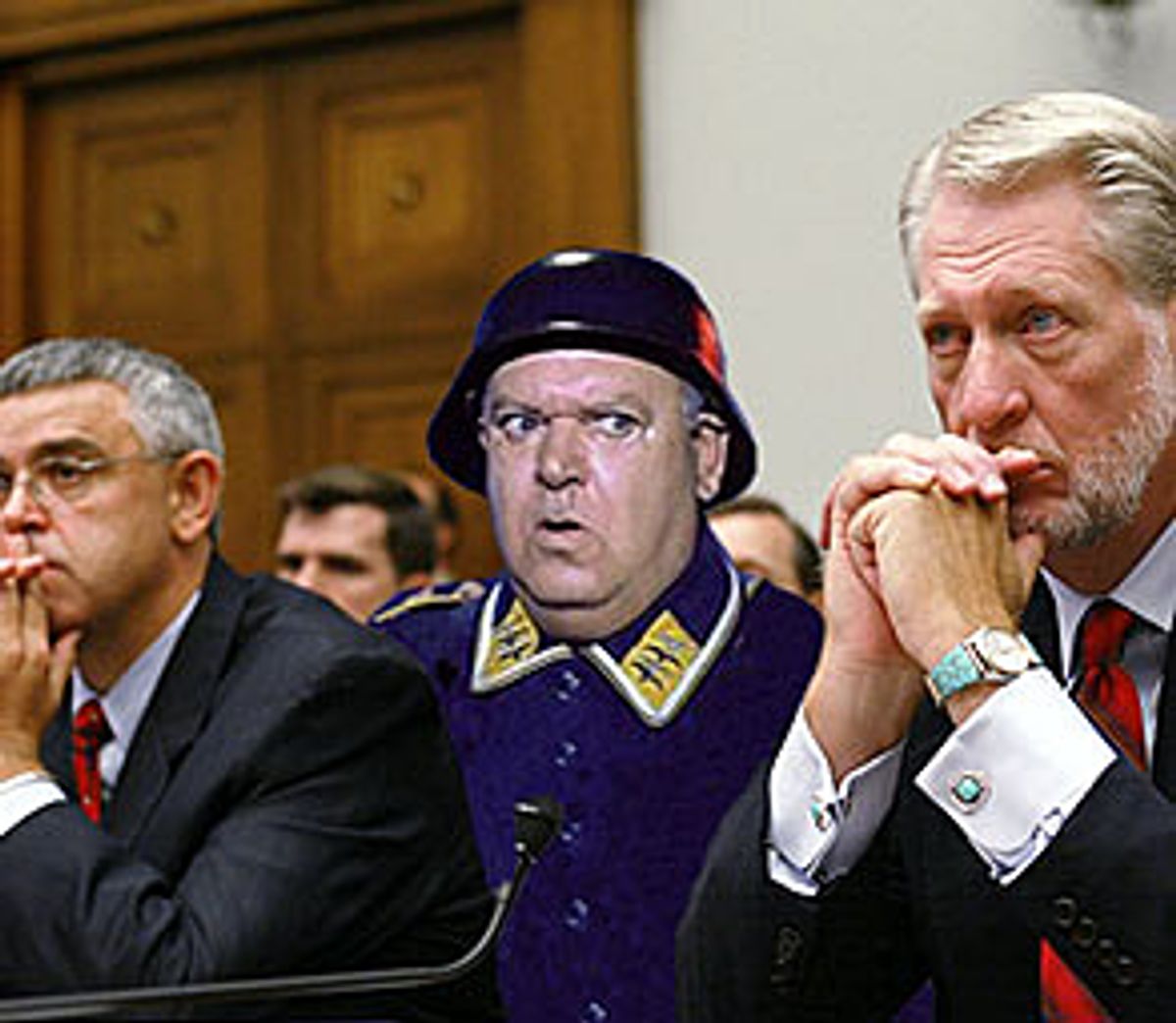 In the see-no-evil, hear-no-evil accounting scandal at WorldCom, nobody knows nothing about that misallocated $3.85 billion. Really.

The new CEO, John Sidgmore, pledges that he didn't know about the cooked books, although he was then a member of the company's board of directors. His defense: As a board member he just wasn't privy to the company's day-to-day operations.

Bernard Ebbers, WorldCom's founder and former CEO, who resigned in April amid questions about the more than $350 million in personal loans he received from the sinking company, says he didn't know about the misallocated funds either. A missionary's son who has proudly stated in the past that running WorldCom was an opportunity to serve the Lord, he chose Easthaven Baptist Church in Brookhaven, Miss., where he worships and teaches Sunday school, to declare publicly to God and man: "No one will find me to have knowingly committed fraud."

In addition to the hundreds of millions in personal loans granted him by WorldCom, Ebbers was paid more than $10 million in salary and bonuses since 1999, apparently to know nothing about any fraud.

(Ousted WorldCom CFO Scott Sullivan, who took the fall for the accounting improprieties when they were announced in late June, suggests that God might know differently. He maintains that Ebbers knew more than he admits.)

The current chairman of WorldCom, Bert Roberts, fingers Arthur Andersen, the company's accounting firm. He testified to Congress that it's "inconceivable" that the accountants did not catch the problems. They must have known! But Melvin Dick, a former Arthur Andersen partner who worked on the WorldCom account, testified that no one at Andersen "had any inkling" of any improper transfers on the books.

Even the analysts have stooped to pledging their cluelessness rather than appear corrupt. One of the company's biggest supporters, the star telecommunications analyst at Salomon Smith Barney, Jack Grubman, who makes an average of $20 million a year, and who supported the stock until just days before its collapse -- well, he didn't see any signs of trouble either. Yes, $20 million a year to know nothing.

Remember when George W. Bush was celebrated as the first president with an MBA, the CEO of the entire country? Remember all those oozing news accounts of the early days of the presidency, which noted how the White House was being run like a tight corporate ship for the first time ever? Makes you a little nervous now, doesn't it? Because even the Executive in Chief himself doesn't appear to know too much about his own past business dealings. When asked by reporters why certain crucial SEC forms concerning his sale of $850,000 worth of Harken stock back in 1990 were filed 34 weeks late, he shrugged: "I still haven't figured it out completely." Why, he just doesn't know.

Ah, for the days when executives bragged about their omniscience, not their ignorance, and were applauded for their superpowers, not their super incompetence. Once upon a time, the leadership role model was Jack Welch, the ballistic, "hands-on" manager at General Electric. Once upon a time, CEOs were the all-knowing, all-conquering princes of capitalism. Never mind that their compensation, especially when compared to the salaries of the rank and file, ballooned ever further into the stratosphere. They were worth it! They were innovators, dazzling us daily with their high finance magic and new economy rhetoric.

But now -- with their compensation ballooning yet further -- they know nothing. Yes, somewhere between NASDAQ's high of around 5,000 and its current doldrums in the 1,300s, executives started cribbing their talking points from the 1960s sitcom "Hogan's Heroes."

Last February, Edward J. Markey, a Democrat from Massachusetts, nailed the phenomenon when he scolded Enron's former CEO, Jeffrey K. Skilling, for his evasive testimony before the House Energy and Commerce Committee: "You are employing the Sgt. Schultz defense of 'I see nothing, I hear nothing.'"

That's Sgt. Hans Schultz, the bumbling German prisoner-of-war guard, a corpulent underling of limited intelligence whose invariable response to the enraged questions of his Nazi commandant was "I know no-thing! No-thing!" If there is anything that encapsulates how the mighty have fallen, it's the transformation of yesterday's superstar capitalists into sitcom buffoons.

Worst of all, there doesn't appear to be any good or smart reason for playing the fool. These guys can't do anything right! Corporate spin doctors, "crisis management" specialists and criminal defense lawyers all agree: "I know nothing" is a go-nowhere defense. Even if it's true, it makes you look dumb, undermines potential lines of future legal defense and insults the customers and shareholders who once entrusted you with their money.

The return of Sgt. Schultz is enough to spark nostalgia for Gordon "greed-is-good" Gekko, the oily insider trader from Oliver Stone's 1980s morality play, "Wall Street." At least Gekko's greed came with a side of self-respect. "I know nothing," by comparison, just strains credulity. It inspires a knee-jerk "For $10 million a year plus stock options you knew nothing! How stupid do these guys think we are?"

James Lukaszewski, a crisis communications manager in White Plains, N.Y., says executives considering this defense should ask themselves this question: "What would your mom or your kids say if they could hear you trying to explain away this problem or situation? Your mom would whup you upside the head, and your kids? Their eyes would roll to the ceiling."

The "know nothing" defense is "a fairly lame alibi," according to Steven Fink, author of the crisis P.R. primer "Crisis Management: Planning for the Inevitable." "These executives are giving the impression that they are saving themselves at the expense of the company and the employees."

The irony is that it may just make matters worse for them.

Jim Felman, a criminal defense attorney in Tampa, Fla., who specializes in white-collar crime, says: "From the defense standpoint, it's always better to have said less than to have said more. To stake out a position as to what they did and didn't know, specifically when the allegations are still being formed, is very, very risky."

Risk taking: Isn't that what running an innovative, thought-leading public company is all about? Maybe these guys are just ahead of the curve, like we thought they were in the late '90s.

The I-know-nothing strategy has a long and distinguished history. In the Iran-Contra scandal, Admiral Poindexter was noted for his forceful, if somewhat repetitive, statements that "To the best of my recollection, I don't recall." But it may be Ken Lay, the former chairman of Enron, that we have to blame for dragging the Sgt. Schultz defense out of the rerun purgatory of Nick at Night and into the Congressional hearings room. Lay trumpeted his cluelessness about how the company he chaired did business even before the Enron scandal broke. Back in August 2001, he told a reporter that the deals that Enron did to shift debt around were "way over my head." And then, when Enron imploded, his supporters waged a campaign to testify to his obliviousness, including his weepy wife, who appeared on the "Today" show to defend her husband as simply unaware, since he "wasn't told" what was up.

So, if the CEOs and chairmen, CFOs and accountants who are making these avowals of ignorance aren't even saving their own hides by doing it, why do they keep up the fervent denials?

Weisberg suggests it's a vain attempt to avoid being pilloried in the court of public opinion. "I understand why people do it. They don't want to get caught up in the press vortex, and they hope to avoid getting characterized as villains." Saying nothing at all may be wiser legally, but it's probably an even worse p.r. move.

Still, don't these titans of capitalism have any pride? Wouldn't it be better to go down in history as a masterful villain than as Sgt. Schultz?