What you don't know can kill you

A brush with death in the delivery room brings a windfall of frightening family secrets. 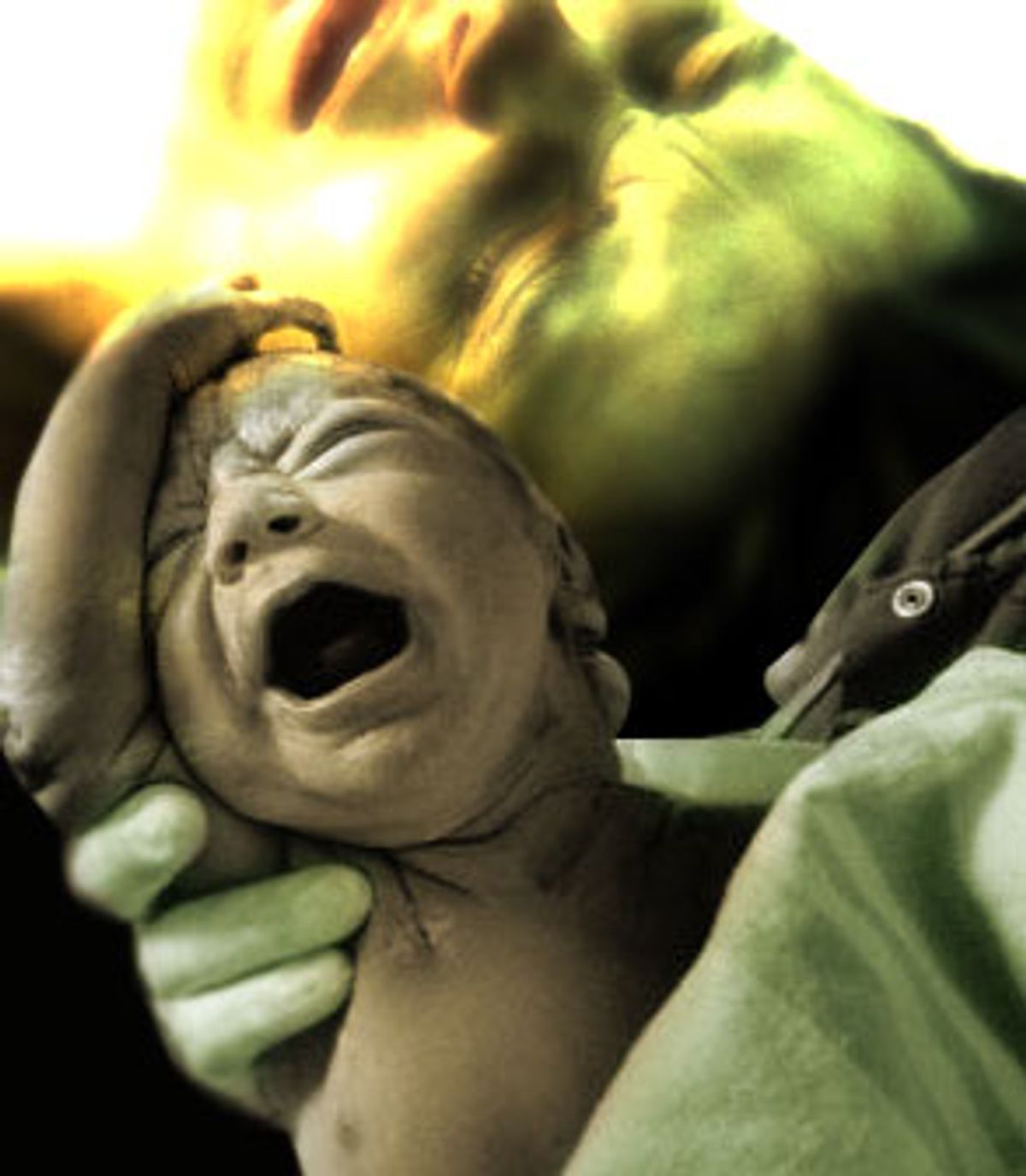 "Do you want to see a priest?" the nurse asked as she wheeled me into an operating room. My husband and I locked eyes for a moment. Unlike the worried faces of residents or even the straight talk of doctors ("You have a life-threatening condition"), the simple cadence of that sentence roused us from the stupor of the previous 12 hours.

We stared at her in disbelief. In the past eight months, I had become accustomed to the midwives in my doctor's practice preaching about "natural" pregnancy; I'd gone to plenty of prenatal yoga lessons teaching slow inhalation, and many child-birthing classes praising soft lights and massage oils. From this preparation, I knew one thing: A woman in the maternity ward is not supposed to be asked if she wants to see a priest.

So how was I turning into an "ER" episode? (Remember that one about a healthy pregnant woman who is diagnosed with a bladder infection in the morning and dies that night from complications of preeclampsia?) Until this strange day -- now five years ago -- my pregnancy seemed trouble-free. We had spent the winter warming ourselves from the chill of short days by anticipating the June arrival of our son. The night before my hospital admittance, we joined a few friends who toasted my 34th week with sparkling water. I was feeling sluggish walking to the restaurant, but then, in my eighth month, that was to be expected.

Two days earlier, I had gone to a New York Hospital clinic with piercing shoulder pain, a symptom, I'd later discover, of preeclampsia. The OB resident in the hospital clinic had "prescribed" buying a good pillow at Bloomingdale's, and getting a massage -- relax and indulge in the beauty of my belly. But after a dinner of eggplant and chickpeas, I woke up the next morning feeling something plump and moist in my mouth. I ran my finger along my gums to extract what I imagined was a stray pea, but dislodged a large clump of blood.

My husband fled work to take me to the emergency room. There, a nervous young attendant led me to the maternity ward. My blood pressure soared; my kidneys and liver were shutting down; my forearms turned black and blue as my veins spasmed and rejected IV needle after needle. Several hours later, I was diagnosed with the most severe form of preeclampsia -- aptly named, HELLP (which stands for hemolysis, elevated liver enzymes, and low platelet count).

By then, I was perilously close to making the deadly transition from preeclampsia to full-blown eclampsia, the onset of seizures. While scientists still are stumped by what causes preeclampsia, the most promising current theory is that a limited bloodflow develops within the placenta. In a normal pregnancy, a woman's placental blood vessels widen, but my vessels had constricted, preventing me from nourishing my fetus, weakening the blood supply to my organs, and sending my body into chaos.

Although preeclampsia was first recorded before Hippocrates, the only known cure is still the same -- removing the baby from the mother's body (no matter how early in gestation.) A perinatologist suggested putting off an emergency C-section until nighttime to stabilize my blood pressure and induce me into labor. But the induction failed. They had no choice but to do the C-section. Thankfully, during the surgery I had enough blood platelets working to prevent the need for a transfusion, and my baby and I fully recovered.

Until that fateful morning in the emergency room, I knew nothing about preeclampsia, a pregnancy disorder that affects about one in 20 women, and is fatal in rare cases -- about nine deaths per 100,000 births. Its occurrence, however, is rising -- reported cases jumped by 40 percent last year -- in part because it tends to affect older women and those carrying multiple fetuses.

Of my many dog-eared pregnancy books, I'd skipped those chapters. My mother never suffered from preeclampsia, and isn't it the inheritance of our mothers that women contemplate with each kick and turn in our bellies? But several weeks after the ordeal, when I was home nursing my 4-and-a-half-pound son, I spoke to my father's niece, who hadn't even known that I was pregnant.

"Didn't your dad tell you about Grandma Laurino?" she asked.

It turns out that my paternal grandmother and her oldest daughter had each lost a baby to preeclampsia; my cousin had a stillbirth at eight months; her sister suffered full-blown eclampsia, convulsing during the delivery of her premature daughter and nearly losing her life.

"You don't know how lucky you are," my cousin, who is twice my age, told me.

My dad was then 82, failing in memory, and unaware of the childbearing illnesses of his mother, who died during World War II; the rest were family secrets, sad relics of nearly a half-century ago, dusted off and belatedly handed to me, the latest keeper of tradition.

At first the news angered me. Weren't women supposed to pass birthing stories along like recipes, the crucial yarns of generations, even if families had moved far from each other? But this odd inheritance, a disorder in which a mother battles with her fetus over nothing less than life, invites the silence of despair. I will never know the terror and pain of my southern Italian ancestresses who lay on prickly mattresses or hard wooden floors in those moments between the rhythmic wails of labor and the convulsions that electrified their bodies. I will never know how many of them were victims of preeclampsia, having suffered seizures, stroke, and coma -- the natural progression of the disorder without medical care.

Shortly after my son's birth, I told my obstetrician our family history and lamented my ignorance. "Maybe it's better you didn't know," she responded quietly. With time, I understood her words. Pregnancy is a leap into the unknown that women gladly embrace; it is about addition, not subtraction, about waiting hopefully for the 40th week, not starting a treacherous countdown at the 20th, when preeclampsia can strike.

When I became pregnant, I chose to live in that wondrous place between medical facts and mystery. If I had been told about Grandma Laurino and all the women who came before and after her, I would have had to face squarely the unreliability of that choice. And being a cautious, logical person, I might have made the wrong one.

Maria Laurino is the author of "Were You Always an Italian?: Ancestors and Other Icons of Italian America." She is currently at work on a book about motherhood and feminism.