How Ozzy lost his cool

At one time the clown prince of darkness was actually dark. Post-"Osbournes" he's just a clown. 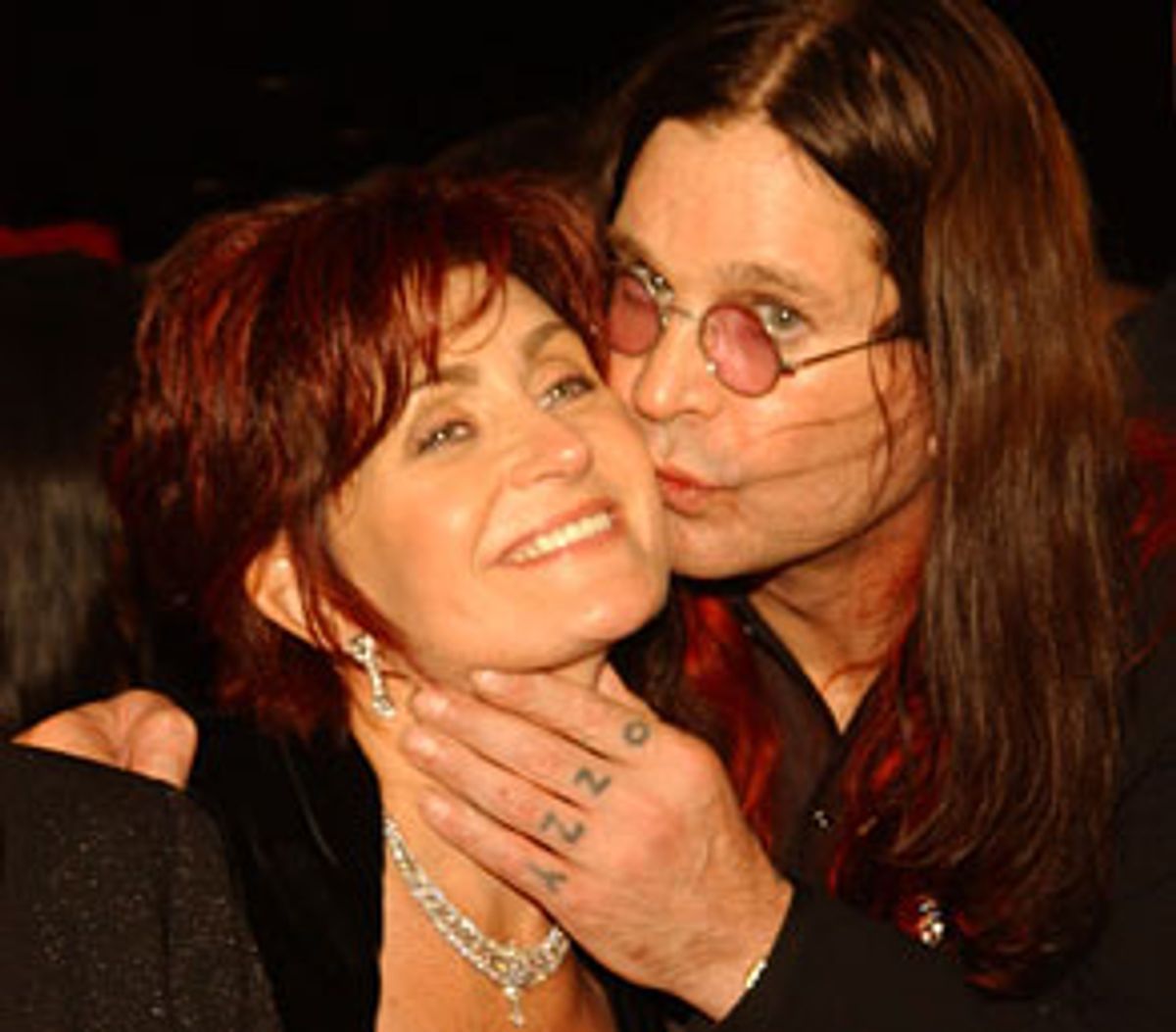 Ozzy Osbourne has always been a cartoon, but over his 35-year career, he's devolved from a witty, sophisticated, multileveled Looney Tune to a grating, bland and stupid Saturday morning advertisement. As we continue to endure the unprecedented hype generated by MTV's "The Osbournes" and witness the latest incarnation of the corporate rock tour franchise known as Ozzfest, it's worth considering how the venerated co-founder of heavy metal moved from being a goofy but guileless Everyman that discerning fans laughed with -- someone who'd have been an alcoholic bricklayer if he hadn't miraculously stumbled into stardom as a rock frontman -- to someone who most of America is laughing at.

Somewhere along the way Ozzy lost his cool. He went from being rock to being pop, from being a private pleasure, albeit to a huge audience, to becoming a mass commodity, ever willing to pander to the lowest common denominator for a buck. And while the metal faithful are all too willing to settle for a two-word explanation for this -- Sharon Osbourne -- nothing in rock or in life is ever quite that simple.

Osbourne, Tony Iommi, Bill Ward and Geezer Butler first came together in depressing, industrial Birmingham, England, in 1967 as a jazz-blues fusion band named Polka Tulk (later Earth). By 1968, the direction had shifted toward something much heavier and darker. Rechristened Black Sabbath, the quartet recorded its self-titled debut on eight tracks in a day and a half, and heavy metal was born as a hybrid of amped-up blues riffs, lumbering rhythms, a comic-book obsession with horror-movie imagery and a mysterious extra ingredient that has confounded mainstream critics ever since.

As one of the most recognizable faces in a largely faceless genre, Ozzy has long been seen as the Clown Prince of Darkness, the living embodiment of the film "This Is Spinal Tap." With Sabbath, and later with Randy Rhoads during his "Crazy Train" solo period, Ozzy delivered a visceral musical thrill that was more instinctual than intellectual, and unrivaled except in the best punk for its liberating, joyful wallop.

Iommi's riffs were always Sabbath's musical strength, while the devilish Butler built the band's image and wrote the most memorable lyrics. Ozzy, however, was the band's soul. His stage moves were awkward (he was forever flashing the peace sign and leaping like an epileptic frog), his voice was strained and homely, and he seemed like kind of a doofus (just like the rest of us). But he was authentic. As drummer Ward put it in "Black Sabbath: An Oral History," "The amazing thing about Oz was that he could take Geezer's lyrics and spit them out 'Ozzy.'"

Implicit in the maximum enjoyment of metal's kick is that one shouldn't think too much about it; at its best, the music is sheer Dionysian revelry. It's ironic, then, that while much of America now views Ozzy as the village idiot, his real problem is that his every move has come to be as coldly calculated and manipulative as possible. And this is where Sharon comes in.

Mrs. Osbourne is the daughter of Don Arden, who managed Sabbath and the Electric Light Orchestra in their heydays, was president of Jet Records and has a reputation in the U.K. akin to that of Irving Azoff in the U.S. -- which is to say, he was a music-biz thug of the old school. Sharon first met Ozzy in the early '70s through her dad; they married in 1982, and she became the singer's manager shortly thereafter. She had to buy Ozzy's contract from daddy Don for $1.5 million, and while the deal caused a bitter rift between the two that remains in effect to this day, Sharon clearly learned her management tactics at the heels of her Faustian father.

According to a recent story about Sharon's bare knuckles, for the recent reissues of Ozzy's first stellar solo efforts, 1980's "Blizzard of Ozz" and 1981's "Diary of a Madman," Sharon ordered that the parts of bassist Bob Daisley and drummer Lee Kerslake be replaced by Robert Trujillo (ex-Suicidal Tendencies) and Mike Bordin (ex-Faith No More) from Ozzy's current touring band. Daisley and Kerslake have a $20 million lawsuit pending for back monies they claim Ozzy owes them, and Sharon didn't want to have to pay them performance royalties for the reissues. Nice lady, eh?

Ozzy had been fired from Sabbath in 1979 because of his drug and alcohol problems. Sharon rightly deserves the credit for not only saving his life, but for resurrecting his career by encouraging him to inject a dollop of the post-punk energy of the so-called New Wave of heavy metal. The cartoon became a bit more simplistic, but the essential oomph remained. Sharon also ensured that the legend of Ozzy would still be larger than life: She's the one who famously suggested that Ozzy bring a dove to a 1980 meeting with Epic Records, though she claims she never suspected he'd bite its head off.

In a way, it doesn't really matter whether this stunt and the many others that followed were engineered by Sharon, by Ozzy or -- my own theory -- by both in something akin to Bill and Hillary Clinton's unholy, scheming alliance. Hardcore metalheads and devoted Sabbath fans tend to portray Sharon as the Iron Maiden, a puppet master who pulls Ozzy's strings, but this is as unfairly insulting to a strong woman in an unforgiving business (after Courtney Love, who has expressed her admiration, Sharon is pretty much the most demonized woman in rock) as it is to Ozzy (who, despite all appearances, is said to be much smarter than he ever lets on. Sometimes it takes a genius to portray a dumbbell -- witness Harpo Marx).

While we speculate about the power balance in the Osbourne household, the fact is that since the late '80s, Ozzy's music has increasingly lost touch with metal's essential wallop as Ozzy Inc. has turned its back on the basic metal formula to chase the trends of the moment. Metal is one of the few rock genres where progress can actually be an impediment. (As with the Ramones, fans have no problem with Motorhead or Slayer remaking the same basic album every time out, as long as it fuckin' kicks ass, man.) Instead, the Oz has turned to crooning power ballads and imitating the post-grunge Sturm und Drang of modern mainstream metal, and here I use that term loosely indeed.

One of the few ongoing successes of the troubled summer concert industry, the Sharon-initiated Ozzfest was conceived to cash in on the wretched n| metal genre, and to position Ozzy as one of its heroes -- never mind the fact that his work in the Sabbath days and in his early solo career has about as much to do with joyless, angst-ridden, down-tuned bands like P.O.D., Drowning Pool and Adema as it does with Burt Bacharach. The only worthwhile act on the main stage of this year's Ozzfest is System of a Down, the radical political band from Los Angeles who worship at the altar of Frank Zappa. But the artistic bankruptcy of the festival has nothing to do with whether or not metal is dead.

The influence of Sabbath continues to loom large on the stoner-rock scene, as well as in the hardcore metal underground, with its infinite subgenres of even death metal and black metal. The thing is, while all of those bands have a lot more cred (and pack much more of that crucial kick), none of them sell like the n| metal boneheads. And as the myriad magazine covers and newspaper features prove, Ozzy today is all about money and celebrity, two things that never much mattered to metal bands in the past.

In striking his devil's bargain, Ozzy's public persona has been transformed from a cartoon that was dumb but cool to one that is just plain dumb. In other words, it's been bye-bye, Bugs Bunny; hello, Garfield.

Needless to say, the major vehicle for this has been "The Osbournes." I am not above laughing at metal's excesses -- "Spinal Tap" is as much a brilliant homage as it is a vicious spoof. Each week, the show invites us to laugh at Ozzy as the doddering old fool who is so wrecked by booze and drugs that he no longer has the capacity to work the TV remote, while Sharon is happily cast as a caricature of the Evil Genius, and two of their three kids (Kelly and Jack; eldest daughter Aimee famously opted out) are portrayed as typically whiny, spoiled, fucked-up examples of the teen demographic their parents are ever so eager to milk.

Some wrongheaded cultural commentators have lauded "The Osbournes" for showing us a "real" (i.e., fucked-up) family as opposed to TV's usual fictional fare, but that's a laugh. "The Osbournes" have about as much to do with how most of us live as the folks on "Friends."

You want reality? Noticeably absent from the show's frequent mocking of Ozzy is any discussion of his bladder problems, which have long been legend in the rock world. The reason Oz continually dumps buckets of water on himself through his concerts is to mask the fact that he's peeing in his pants, according to some who are in the unenviable position to know. A friend of mine who once visited the Osbourne manse reports that Ozzy has a "special bathroom" whose walls are lined with rubber because his aim is so bad. Somehow, MTV's cameras have avoided showing us all that.

As I said, I choose to believe that Ozzy isn't a complete moron, just a bit of a mess. But whatever his actual psychiatric diagnosis, there is something distasteful about the show goading us to mock him, while nary a word is ever said about his very real musical accomplishments. Would we want to visit a blues great in the old-age home and chuckle as he gums his oatmeal, or stop by a rehab facility to laugh at a jazz giant as he tries to kick his junk problem? Why don't we just drop in on Syd Barrett or put a sandbox in Brian Wilson's front yard and laugh at them for a while? Goofing on Oz is hardly any better.

No one ever laughs at Sabbath guitarist Iommi, whom Sharon is said to hate. (Legend holds that she once set Iommi up on a blind date at a tony restaurant, and when he was seated at the table, she sent over an elaborately wrapped box containing her feces.) The veteran Sabbath instrumentalists may now be fat, old and grizzled, but when they reunite onstage, they still deliver the goods, avoiding the dreaded curse of rock nostalgia through the undiluted force of the music's punch. Not so with solo Ozzy.

"I'm not the kind of person that you think I am/ I'm not the Antichrist or the Iron Man ... I try to entertain you the best I can," Oz sings on "Gets Me Through," the lead track on 2001's execrable "Down to Earth," which is reprised on the equally avoidable new concert album, "Ozzy Osbourne Live at Budokan." Having invited us to pull back the curtain to see "the real man" (who is in fact just another cardboard caricature and -- even worse -- a "professional entertainer"), it's become impossible to enjoy the old metal myth.

The Ozzy of yore may have sold his soul for rock 'n' roll, but he would never have auctioned it to be just another MTV cash cow, a Britney Spears with nasty old hair and a Brummy accent.

Jim DeRogatis is the pop music critic at the Chicago Sun-Times. He is the co-host of the radio show "Sound Opinions" and the author of "Let It Blurt: The Life and Times of Lester Bangs, America's Greatest Rock Critic." His Web site is www.jimdero.com.