The Madman and me

Ozzy and I crossed paths on the worst day of my life. Boy, am I grateful. 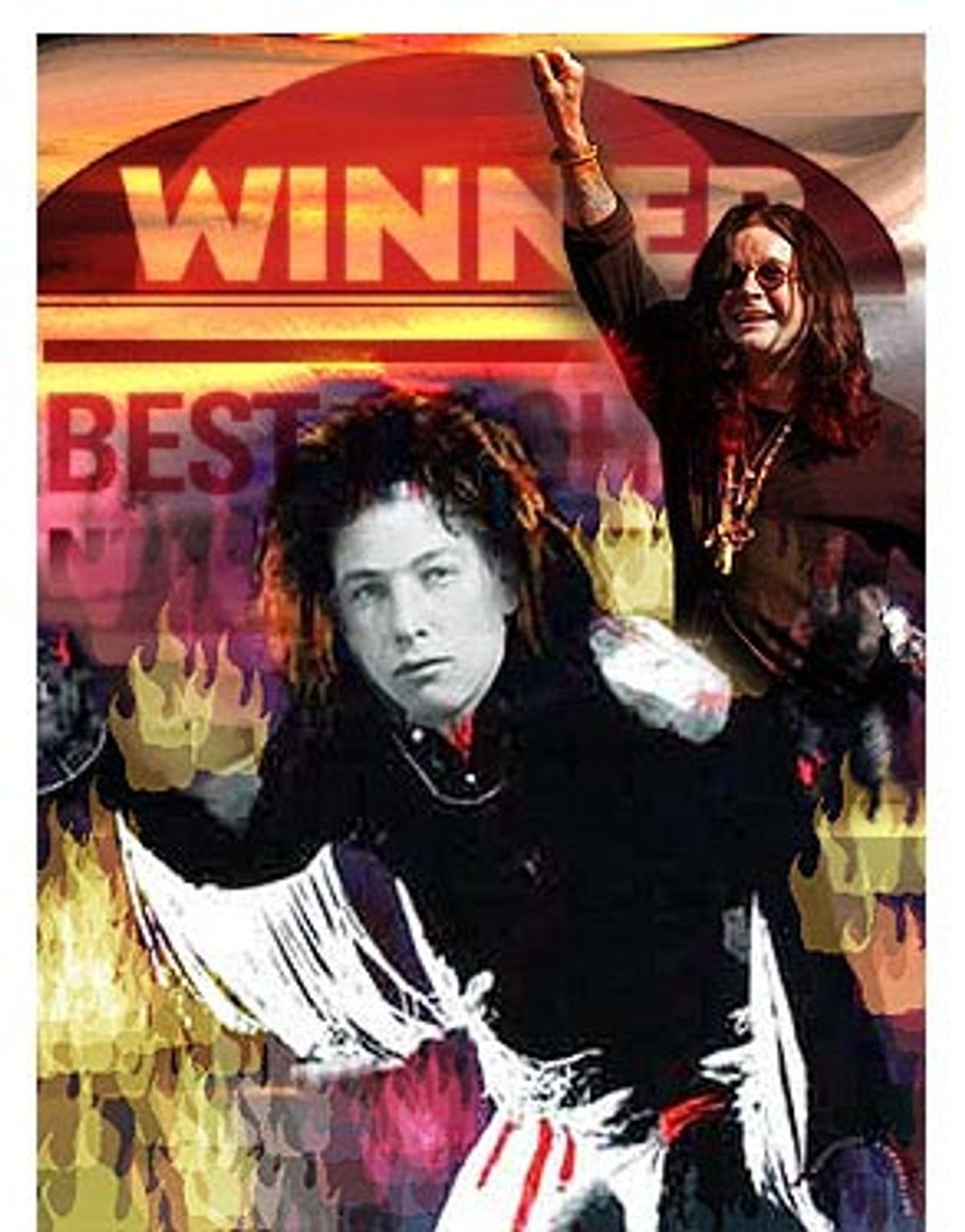 The day I heard the news of my father's death -- he was hit by a drunk, killed on a lonely stretch of road in Washington state -- was the same day I received a call informing me I was a finalist in the Ozzy Osbourne Look-Alike contest. I was to show up at the studios of KGON, the local rock station that sponsored the contest, on Thursday the 17th at 2:45 p.m. I still have the piece of paper with the neatly printed contest details pasted in my Ozzy Osbourne scrapbook, the one I've saved from my mullet-wearing days. Word from the station was that Ozzy himself would interview the four finalists and pick the winner. The day started out as one of the happiest of my life and ended as the worst.

It was the summer of 1982 and I had just finished my freshman year of high school. I attended a private school my parents saved dearly to send me and my brothers to. They wanted to give us a better education. They wanted to keep us away from the open campus and drugs they feared were so prevalent in the public system. So I would spend my teenage years at a Christian Brothers-run school in the city of Milwaukie, 20 minutes southeast of Portland. The best way to describe Milwaukie is simply this: me and Tonya Harding, same malls.

I appreciated my parents spending their hard-earned money to send me to a private school, but I wasn't prepared to compromise my devotion to Ozzy. My uniform of faded jeans and concert T-shirts rubbed the conservative faculty the wrong way, but it wasn't until I led the entire freshman class in a chant of "Judas Priest! Ozzy Live! We're the class of '85!" at a pep rally that the administrative brass fingered me as trouble.

For any kid with a rebellious streak and a fascination with the darker side of life, Ozzy and his music were easily intriguing. He represented everything that teenage boys lusted after: sex, drugs and rock 'n' roll. Cloaked in bleak imagery that parents feared and preachers railed against, he was perfect, the nagging stone in the shoe of authority.

I was introduced to Ozzy through my cousin's Black Sabbath records. The music was ominous, like a storm cloud rolling from the speakers. I found the contrast of the heavy, crunching guitars and Ozzy's sympathetic whine oddly appealing. But it wasn't until I heard the song "Crazy Train," the first single of Ozzy's solo debut, "Blizzard of Ozz," in '81, that I fell under his sway. He also did things like bite the head off a bat (an accident) and take a whiz on the Alamo (not an accident) that I found amusing. I saw him perform at the Paramount Theater that summer -- my first show and still one of the highlights of my concert-going career -- and after that it was all Ozzy, all the time.

It seems ridiculous now, but after the initial shock of finding out I was short one parent, and before the reality of dealing with it set in, the only thing I could think about was meeting my hero. I lay in bed that Thursday morning waiting for my mom to ask me a question I didn't have an answer to: whether I was going to see my dad one last time. This would be our only opportunity before the funeral on Friday.

I hadn't thought about it, really. I was too busy going over what I might say to Ozzy and, more important, what I was going to wear. The Look-Alike part of the contest was misleading as I bore no physical resemblance to Ozzy whatsoever. I had won the first round of the event by flawlessly lip-syncing to one of his songs at a scummy 18-and-over bar called the Wooden Shoe on the east side of Portland.

If I was going to actually win the contest I figured I'd have to overcome my appearance. I decided to mirror the cover of his second album, "Diary of a Madman," and turn myself into a tattered lunatic. I was so focused on the details of my transformation that when my mom came in the room and said I couldn't go to the radio station or the concert that night, not with the funeral the next morning, my throat tightened and my eyes squinted with pain, and kneeling on my bed, I cried my first tears since the accident.

A couple of hours later, my mom was smearing my cheeks, forehead and chin with white face paint, dribbling fake blood at the corners of my mouth. My aunt teased my hair into a manic nest. I shredded a pair of white pants and splattered them with blood. I added long white fringe to the sleeves of a blue soccer jersey, transforming it into an exact replica of the shirt Ozzy wears on the "Diary" cover. I drew tattoos all over my body -- not just the word "Ozzy" across my left knuckles -- but a dagger and skull on my left forearm and a rose on my right shoulder, with great detail and in full color. My younger brother, Ted, searched for a blank cassette tape and prepared to record my radio appearance. Friends dropped by the house to check my progress. My older brother Chris and a friend dressed as chauffeurs and drove me to KGON.

When we arrived at the station, the guys opened the car door for me as if I had been a rock star. The crowd, which had gathered outside the small brown building that housed the station, froze with excitement as I stepped from the car, believing for a brief moment that I was the Madman himself. The day was hot and I felt the black mascara begin to run under my eyes. The crowd applauded.

I was ushered into the studio with the other finalists, and there he was, Ozzy Osbourne. He was shorter than I had imagined, wearing royal blue pants and a white collarless dress shirt. His hair was shoulder-length and frosted. He was very friendly -- almost shy -- and his thick Birmingham accent was easier to decipher than it is today. I stood next to him for the interview and he asked me if my tattoos were real. I met his fiancée Sharon (they were married a month later, on July 4), who looked more like a den mother than the manager and soon-to-be-wife of a heavy-metal god. Savvy fan that I was, I knew of the impending nuptials and told her that she had "the coolest husband!" and she thanked me. I got his autograph, backstage passes and tickets to the concert.

For half a day my silly fascination with Ozzy Osbourne gave my family some solace, allowing my mom and brothers and friends to breathe, smile and even to laugh a little during a very difficult time. I don't know what made my mom change her mind; neither of us can recall. Perhaps it was seeing her husband's body lying still and lifeless. Or the generous amounts of foundation on his face, hiding the sutures that held his skin together. Maybe it was his mouth, which so often wore a smile, positioned with straight indifference. Whatever it was, she returned from the funeral parlor with a new perspective, maybe as simple as "Life is too short."

The next day, with my ears ringing, I sat in St. John's Church wearing dress clothes that chafed and tugged in awkward directions, poking me into uncomfortable angles in the pew. The rush of the concert couldn't have been a greater contrast with the morning's services. The encore had ended and the hard part had begun.

I don't remember much of the funeral or the wake that followed. I do remember being alone with my brothers and mom after everyone had left. Sitting in our house filled with flowers, surrounded by picked-over deli trays, ham and cheese curling in the heat, beer cans floating in coolers of melted ice, and half-drunk bottles of wine standing shoulder to shoulder on the countertops. The sun shining as if nothing had happened.

The vinyl sleeves of my scrapbook are cracked with age and stained with fingerprints, still stuffed with articles neatly torn from the pages of Hit Parader, Circus and Kerrang magazines. Halfway through the binder are two pages dedicated to that warm week in June 20 years ago. On the yellowing piece of paper bearing the contest details is written I WON!!! enthusiastically underlined three times.

Every time I come across those pages, I'm hit with competing feelings of pain and joy that layer in my memory. These days, though, knowing that so many people are looking at Ozzy Osbourne as the unlikely paragon of family values, my confusion yields to a sense of justification. Somehow, the Madman's warm acceptance as a cultural and familial icon confirms my mom's decision to let her son turn to the Prince of Darkness for comfort during the worse week of his life.

Erich Pfeifer is a freelance writer in San Francisco.