Why do the John Ashcrofts burn with hatred for John Walker Lindh? He's their renegade son whose every thought and action stands as an unforgivable personal rebuke. 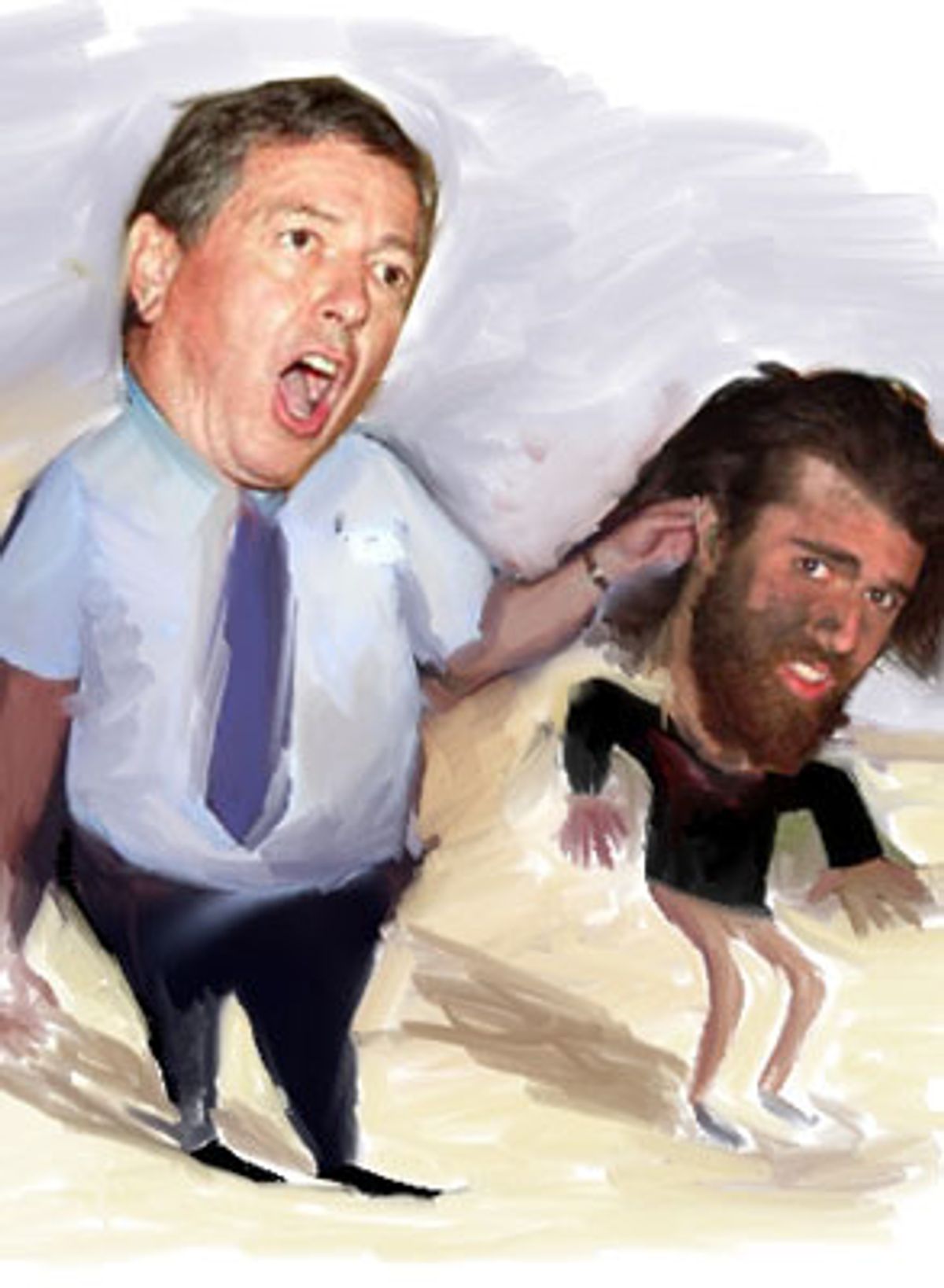 So John Walker Lindh has given up without a fight, just as, apparently, he did in Afghanistan. Of course, based on what we know about his time abroad, he never had any fight in him -- as opposed to, say, a real Taliban or Qaida warrior -- which should have told his prosecutors, or any American paying attention, that he was never a threat to begin with. And yet the government seems strangely pleased with itself for having put him away for 20 years, or as Attorney General John Ashcroft has noted, with typical un-Christian glee, "nearly as long as he has been alive."

How to explain the obsessive interest of men like Ashcroft in the minor case of criminal jurisprudence that is John Walker Lindh? It is shocking, really, how many powerful men, all of them old enough to be his father, have it in for Walker. Of course it is just that fact -- their power and prestige, their age vs. his -- that explains it: They see in Walker their own renegade son, real or imagined, the kind of elusive, questioning young man whose deep suspicion of their motives and accomplishments -- as congressmen, commentators, law professors or Cabinet secretaries -- stands as an unforgivable personal rebuke.

Not surprising, then, that the only notable figure who seemed to have shown any sympathy, at least in the beginning, for the so-called American Taliban was another former wayward son, George Walker Bush. While his own father wanted to send John Walker around the country in his dirty, unwashed clothes begging for the sympathy of the American people, the younger Bush simply called him a "a poor fellow" who had been misled, and left it at that.

I'm not old enough to be Walker's father, but maybe I could have been his teacher. A 20-year-old child of privilege from the wealthy suburbs, son of a lawyer and New Age enthusiast whose family has broken up, a young man whose interests are encouraged by having money thrown at him by his parents -- this is the kind of student I see every day at Harvard.

Of course, as far as I know, none of my students found their way to fundamentalist Islam, much less to weaponry and military training and finally, into battle, but this only goes to show that Walker's is an extreme of a rather typical journey. Twenty or thereabouts is the age of dissatisfaction for intelligent, introverted men who feel themselves alienated from their upbringing or surroundings, and can lead to play-acting; hence the affectation of John Walker wandering Marin County with his new Islamic name and strange clothes, mumbling about the Koran. Exotic, perhaps, yet not entirely unlike the Californian I met on my third night as a Yale freshman 17 years ago, a young man who fervently believed that the only true civilization was English, circa 1920 at Oxford, and wanted to stay up the night reading "Brideshead Revisited" aloud.

What the verdict in the Lindh case has established is that A) Walker fell in with the Taliban, and B) he carried weapons. All terrorism charges are dropped. Those who fall in with gangs and carry weapons in Los Angeles and other cities don't spend 20 years in jail for these crimes, yet it seems that Walker will spend at least the next 18 behind bars. The government can be assured of his good behavior, after all. But we are often most savage when punishing our own, their crimes made worse by our humiliation. Only a short time ago they intended to pursue treason charges against him, wisely dropped because that would raise all sorts of unwanted questions -- for the feds -- about what this antiquated, rather abstract offense actually means in the global age of porous borders and mutating loyalties.

Keeping the law out of it, however, most Americans became convinced that Walker is a traitor; and so last winter we faced the unlovely spectacle of a maddened public baying for the head of a young man more privileged than their sons or neighbors' sons, the kind of bright, muddled boy that some of us might remember from high school or college.

The agreed facts now suggest that Walker never attacked much less killed any American, and it was never credible that a small-time foreign "combatant" would have any special information beforehand about the events of Sept. 11. Normally, after a war, the small fry are disarmed and sent home; because he is American, Walker came back to us in chains, facing life imprisonment for shooting his mouth off in front of his interrogators in Afghanistan. Which suggests that his real crime has been arrogance, his presumption that life in America is sinful and wicked, inferior to the true Islamic religion. He has spurned Uncle Sam -- in the words of Ashcroft and his prosecutor Paul McNulty, "turned his back on the United States" -- and the family, or paterfamilias, can't forgive him.

But why -- logically speaking -- should an American raised with America's freedoms and privileges have to accept them? Or if he accepts them, be grateful? I live in this country, an American citizen who enjoys its power and protections, but I am not a proud American. A childhood spent in Europe returned me to this country thinking of myself as neither American nor European but as some sort of restless, vaguely global citizen; Walker's path may have been different, but the effect on his character is substantially the same. The world is full of such Americans, some of whom live here and many of whom don't. In fact, by rejecting America for the harsh restrictions of life with the Taliban, Walker proves himself far less a hypocrite than me. His life has its own integrity in his act of departure two years ago. Did anyone ask him, over in Kandahar or on that Navy ship, if he wanted to stay?

Surely we have the right -- short of actual proven violence or conspiracy -- to test our loyalty to our country, which is the only useful way, it seems to me, of finally embracing it. A noble American is one who has considered the alternatives and still returned, which is presumably not a journey on which Ashcroft and Co. have ever embarked. Yanking him home as we did -- the hand of John Ashcroft pulling a miscreant boy along by his ear -- we cut short the journey of John Walker before its time, and for no greater reason than to make an example of him.

Did we need the example, however? Walker's case is not even exceptional; it is unique. Our Puritan attorney general, hating the sin and the sinner alike, has daubed his own scarlet letter on a probably harmless young man and would gladly have killed him if he had half a chance, because in the scraggly bearded face (now clean-shaven) of John Walker Lindh he sees the kind of American who frightens him most: the kind with his own certainties, which are not the same as his elders'.