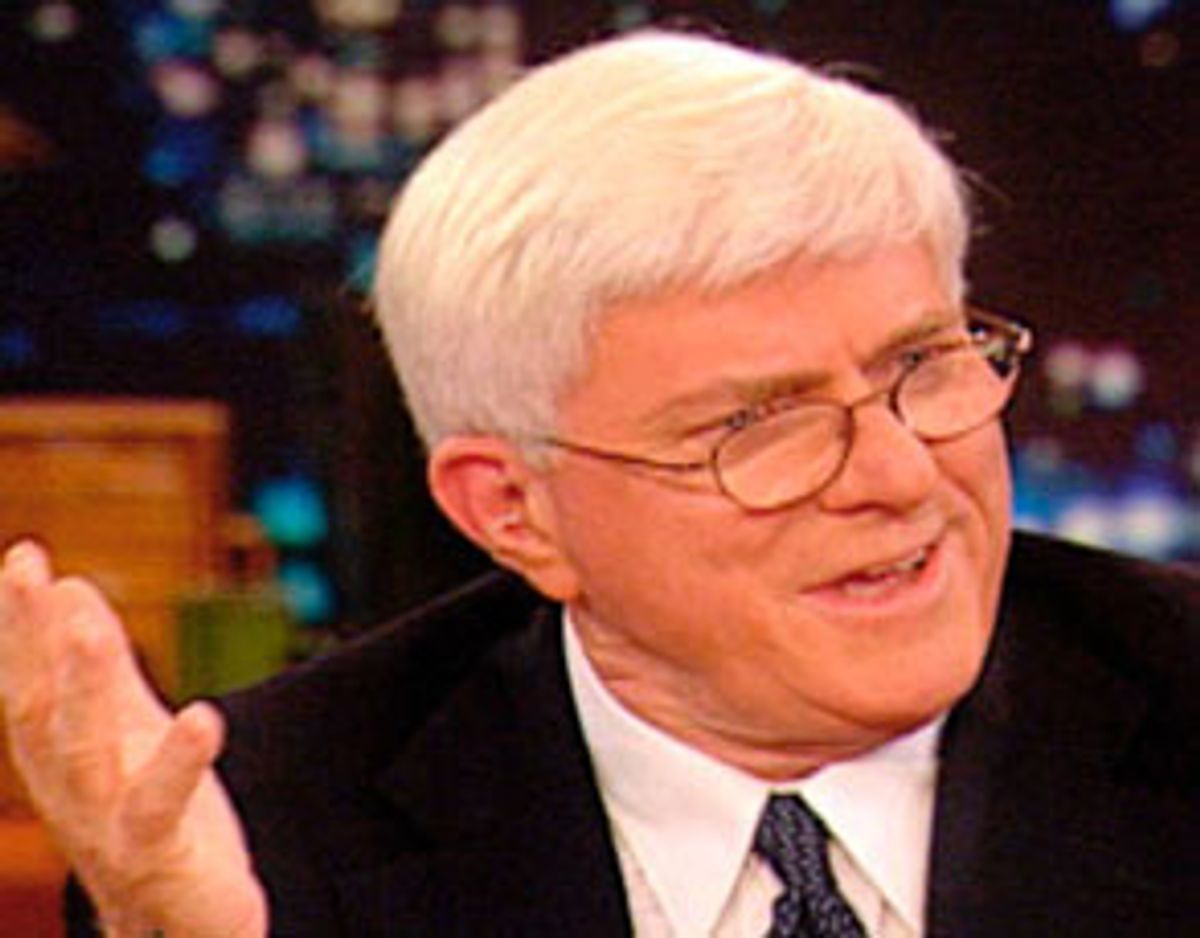 Don't tell "liberal media" bashers Bernard Goldberg or Ann Coulter, but bleeding heart Phil Donahue just debuted his prime-time cable talk show on MSNBC and the move was considered big news inside the business. Why? Because the TV and radio landscape has become so dominated by conservative talkers -- a fact that flies in the face of the authors' recent claims that the mainstream media reads off of the same lefty script.

Even Republicans acknowledge the obvious. Welcoming GOP stalwart Patrick Buchanan as a guest on the Monday night program, Donahue joked: "I got a show, Patrick. I mean, holy cow, somehow a liberal got in."

More likely it was good business that led MSNBC to hire the 66-year-old Donahue, the Dick Clark of TV talk. With the cable spectrum maxed out on conservatives -- thanks, in part, to Fox News' entire programming lineup -- the also-ran MSNBC couldn't do any worse with a liberal at the top of its prime-time lineup.

On his first night, Donahue drew just over a million viewers. That's nearly triple the number who watched MSNBC's "The News With Brian Williams," which used to occupy the 8 p.m. time slot. Donahue also blew away ratings for the recently canceled "Making Sense," featuring conservative Alan Keyes, which aired at 10 p.m.

And Monday night, Donahue actually beat his CNN rival Connie Chung and her new 8 p.m. news show. No doubt some tuned in just for sentimental reasons, or for the novelty. But if he can maintain an audience that hovers above 700,000, the program, like the new "Crossfire," will be a success and perhaps wash away the notion that only conservatives can do TV talk.

But let's not get carried away with the idea that Donahue is breaking through historic barriers. The white-haired host spent more than 30 years prowling the broadcast landscape and asking provocative questions before walking away in 1996. (Though many of those questions were directed at American housewives, not Beltway players.) When he and Buchanan squared off on camera to debate the recent Pledge of Allegiance court ruling, they were just another pair of wealthy, middle-aged, white Irish Catholic men pontificating.

Yet they did it with the kind of oratory skill, savvy and touch of bluster that's almost extinct from televised debates today. Like a couple of PGA senior pros on familiar links, the two still had the swing and the smarts to play the game gracefully and entertainingly. Sure it was nostalgic, and at any moment viewers expected them to break into heated 1980s debate about the role of the contras, but it was also passionate TV that revolved around core beliefs, not hollow accusations or a game of political gotcha. For a few minutes, it was the old point-counterpoint style of televised debate. No cutaways to talking heads weighing in via satellite, no endless interruptions of guests.

And Donahue boldly defended the controversial court ruling that deemed the Pledge of Allegiance unconstitutional. What other TV talker has done that in prime time?

Judge Robert Jackson? Does anybody think Fox News' Bill O'Reilly even knows who Judge Jackson was? Or cares? Instead, O'Reilly seems to wear his ignorance as a badge of honor. Now saddled with a daily syndicated radio talk show, it appears, judging from his on-air performance, O'Reilly's nightly prep work before taping his TV show has shrunk from 20 minutes to 10.

Not that Donahue's show is all academics and no theatrics. On the first two nights, round-table discussions about a possible war with Iraq and the consequences of the PATRIOT Act often disintegrated into impossible-to-follow shouting matches.

Yet there was one rare "aha" moment, thanks to conservative guest Cliff May, former communications director for the Republican National Committee. In a debate about the PATRIOT Act, May insisted that during the post-Sept. 11 dragnet, which detained nearly 2,000 people, "no constitutional rights have been taken away."

When guest Bill Goodman, from the Center for Constitutional Rights, pointed out that American citizen and alleged "dirty bomb" suspect José Padilla has been held without access to a lawyer and without being charged with a crime, May shot back: "Do you really think he's innocent?"

Rarely are such crass anti-democratic attitudes publicly revealed, but they were on Donahue's program.

So much has been made in the press of a proud liberal like Donahue stepping into the conservative cage of talk television. But always the nice guy, whose sincerity still seems genuine after all these years, Donahue doesn't want to try to out-shout anybody. Instead, he's deftly using his power to shift the focus of the debate for 60 minutes each night.

It was telling that Donahue's first guest on the inaugural show was Scott Ritter, the former United Nations weapons inspector turned dove, who argued the United States today has no basis to declare war on Iraq. An ex-Marine and a proud Republican who spent years inspecting Saddam Hussein's arsenal, Ritter has been surprisingly absent from the national debate about a new war with Iraq. Donahue fixed that oversight in one night.

Tuesday night's program worked better since it was centered around a single theme, unlike Monday's debut, which hopped around from war with Iraq to the Pledge of Allegiance to a possible baseball strike. Anchored by Ben Franklin's quote, "Those who would sacrifice freedom for security will get neither," the program focused on the PATRIOT Act, a chilling new domestic intelligence-gathering law that has been virtually ignored by television news outlets in recent months. (The only problem being that Donahue rendered the quote inexactly and wrongly attributed it to another of the founding fathers, James Madison.)

Donahue invited Sen. Russ Feingold, D-Wis., the only Senate member who voted against the PATRIOT Act, to discuss the legislation and how it relates to the FBI's national dragnet of mostly Middle Eastern men thought to have terrorist ties. "There have been serious abuses of civil liberties of people who did absolutely nothing wrong," the senator said.

According to a search of Nexis' electronic database, here is how many times in the six months before his "Donahue" gig that Feingold was on a national broadcast to discuss the PATRIOT Act or the people detained since Sept. 11: 0.

Truth is, in his first two nights on the air, Donahue did more to expand the perimeters of our national debate than Alan Keyes did during his last two months on MSNBC.

And that's something that might really upset Goldberg and Coulter.