It's not just Saddam's doomsday arsenal that haunts the Bush White House -- it's the thought of his oil falling into the hands of Russia, China and Europe. 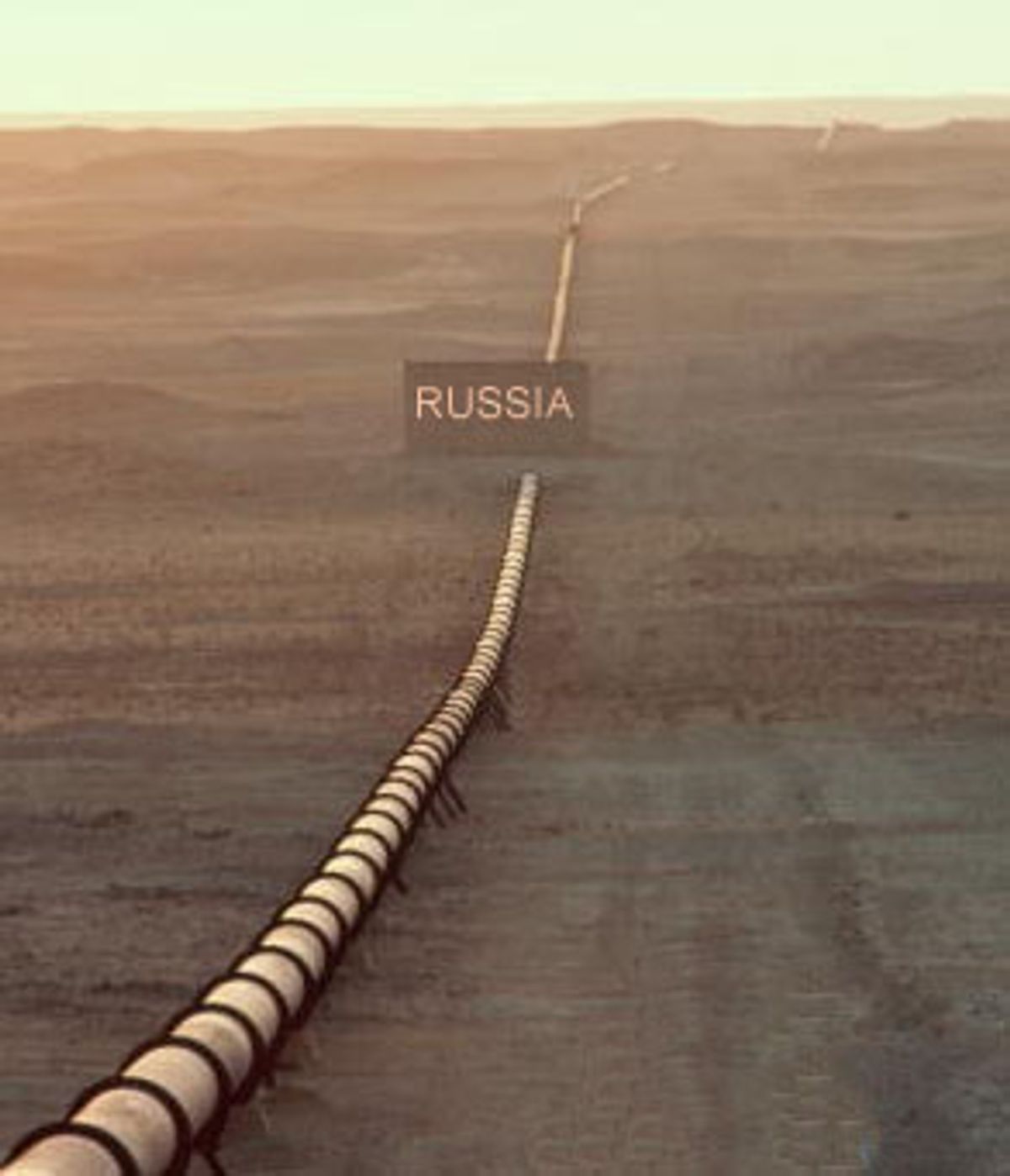 As is widely known, the Bush administration has initiated planning for an American invasion of Iraq. The U.S. assault is expected to occur early next year, and to entail the commitment of several hundred thousand U.S. combat troops. While strongly supported by top Republican leaders, and some prominent Democrats, these plans have been condemned by many of America's closest allies and, as a result, have provoked a certain amount of unease among senior U.S. military officials. Why, then, is the administration so determined to proceed with the planned invasion?

Several explanations have been advanced by Washington insiders to answer this question. The official view is that Saddam Hussein must be deposed before he can employ the weapons of mass destruction that he is thought to possess in some future clash with the United States or its allies. Some analysts also believe that the current White House leadership seeks to erase its lingering embarrassment over the first President Bush's failure to eliminate the dictator in 1991, at the end of the Persian Gulf War. These, and other such explanations all contain an important element of truth. But they also leave out one critical factor -- oil.

The pursuit and protection of Middle Eastern oil has, of course, always been a significant factor in U.S. security policy. In 1980, then President Jimmy Carter made explicit what had long been stated informally: that any hostile effort to impede the flow of Persian Gulf oil would be regarded as an "assault on the vital interests of the United States," and, as such, would be "repelled by any means necessary, including military force." This principle, dubbed the Carter Doctrine, was later given as the reason for American intervention in the 1991 Gulf conflict and for the subsequent buildup of U.S. forces in the region.

Because Iraq still poses a significant threat to Kuwait and Saudi Arabia -- two of America's leading suppliers of oil -- it continues to serve as a potential trigger for the Carter Doctrine. The fact that Iraq probably possesses chemical or biological munitions (how many such weapons remain in Iraqi hands cannot be known with any certainty because there have been no U.N. inspections there since 1998) adds to but does not alter the basic nature of the threat. In this sense, current U.S. concern over Iraq and its illicit weaponry is tied to the longstanding American policy of protecting the flow of Persian Gulf oil.

But Iraq also figures in other key aspects of the global oil equation. At a time when domestic U.S. oil production is facing long-term decline and America's demand for petroleum is rising every day, the United States is becoming ever more dependent on major foreign producers like Iraq and Saudi Arabia. Iraq currently provides the United States with approximately 800,000 barrels of crude oil per day, or about 9 percent of total U.S. imports. (Although the United States does not buy directly from Iraq, it acquires Iraqi crude from middlemen who trade with Baghdad under the U.N.-supervised oil-for-food program.)

However, it is not the current flow of Iraqi oil that matters most in Washington, but rather the long-term equation. By 2020, according to recent Department of Energy calculations, the United States will need to import 17 million barrels of oil per day -- 6 million more barrels than today. Some of this additional oil will probably come from fields in Latin America, Africa, Russia and the Caspian Sea basin, but most of it will have to come from the Persian Gulf area, because only the Gulf possesses sufficient reserves to increase production substantially. Saudi Arabia, with estimated reserves of 262 billion barrels, has the greatest capacity to accelerate production, but Iraq, with 113 billion barrels, comes in second. Together with Iran, Kuwait and the United Arab Emirates (UAE), these countries possess two-thirds of the world's known oil reserves.

The Bush administration is well aware of America's (and the world's) growing dependence on Persian Gulf oil. In the National Energy Policy report issued in May 2001 (also known as the Cheney Report after its key author, the vice president), the White House observed that "by any estimation, Middle East oil producers will remain central to world oil security," and thus will remain "a primary focus of U.S. international energy policy." This means, in particular, convincing the Gulf countries to substantially increase their daily output and to export more of their oil to the United States.

It would be possible, in theory, for the United States to satisfy its need for increased oil supplies with added imports from Kuwait, Saudi Arabia and the UAE alone. But American officials are well aware that conflict and disorder in any of these countries, or a lack of adequate investment, could prevent the delivery of adequate supplies. It is therefore U.S. policy to diversify its dependency as much as possible, by increasing imports from other suppliers. Hence the current drive to acquire additional supplies from Russia, Nigeria and the Caspian Sea countries. But none of these alternative producers can compare to Iraq in its capacity to boost production substantially. With 113 billion barrels of proven reserves and indications of vast untapped reservoirs in as-yet-unexplored areas of the country, Iraq is the only country besides Saudi Arabia that can add millions of barrels per day in additional production over the next 10 to 20 years. It is for this reason that Iraq looms so significantly in America's foreign energy policy.

One could argue, of course, that the United States can afford to wait a number of years until the current Iraqi regime collapses of its own accord and then do business with the successor government -- which, one supposes, would be eager to sell Iraqi oil to anyone who will purchase it. That is, we could allow market forces to resolve our supply problem. But there are reasons to suspect that American leaders are reluctant to allow time and the market to accomplish this objective. In particular, we can assume that Washington is deeply troubled by reports that Baghdad has signed oil-development contracts with a host of non-U.S. firms -- including prominent Russian and Chinese companies -- giving them potential control over Iraq's untapped reserves.

The most detailed survey of recent Iraqi oil deals appears in the 2001 edition of World Energy Outlook, the annual publication of the International Energy Agency (IEA), an intergovernmental body based in Paris that the United States helped create. According to this survey, Iraq has sold off development rights to areas holding an estimated 44 billion barrels of oil -- an amount equal to the total proven reserves of all East Asian countries combined. Among the companies that are parties to these deals are such European giants as ENI and TotalFinaElf along with Lukoil of Russia and the China National Petroleum Company (CNPC).

These development projects cannot be implemented in the current political environment, which places Iraq under U.N.-imposed economic sanctions. But if sanctions are lifted, and the current regime (or one that it allows to be formed) remains in power, Iraq's vast untapped reserves will fall under the control of non-U.S. companies. Some of these companies will, no doubt, want to sell their output to the United States; others, however, may prefer to send their oil elsewhere, or to use these supplies for political advantage. In any case, the United States can have no assurance that they will be available to satisfy America's future energy requirement. Obviously, the only way to prevent this from happening is to engineer a "regime change" in Baghdad, and install a government that will cancel these agreements.

As yet, no senior official in Washington has cited this as a reason for invading Iraq. To do so would be to eliminate whatever remaining credibility the Bush administration has in Europe and the Middle East. It could also provoke opposition in the United States among those who question the sacrifice of blood for oil. But there can be no doubt that the White House -- made up, as it is, of former oil company officials -- is aware of the oil situation in Iraq and the problems this will pose to successful realization of the administration's long-term energy strategy. Only by occupying Iraq and choosing its new government can the United States be certain that these problems will be overcome.

At this point, it is impossible for outsiders to know what, exactly, is driving the administration's campaign to oust Saddam Hussein. No doubt many factors are involved -- some strategic, some political, and some economic. But it is hard to believe that U.S. leaders would contemplate such an extreme act without very powerful motives -- and the pursuit of oil has long constituted the most commanding motive for U.S. military action in the Persian Gulf region. Whether that is the case -- and whether such action is actually justified in this instance -- can only be determined if there is a frank and open discussion of U.S. policy towards Iraq. Surely, such a discussion is called for before we place the lives of our servicemen and women at risk.