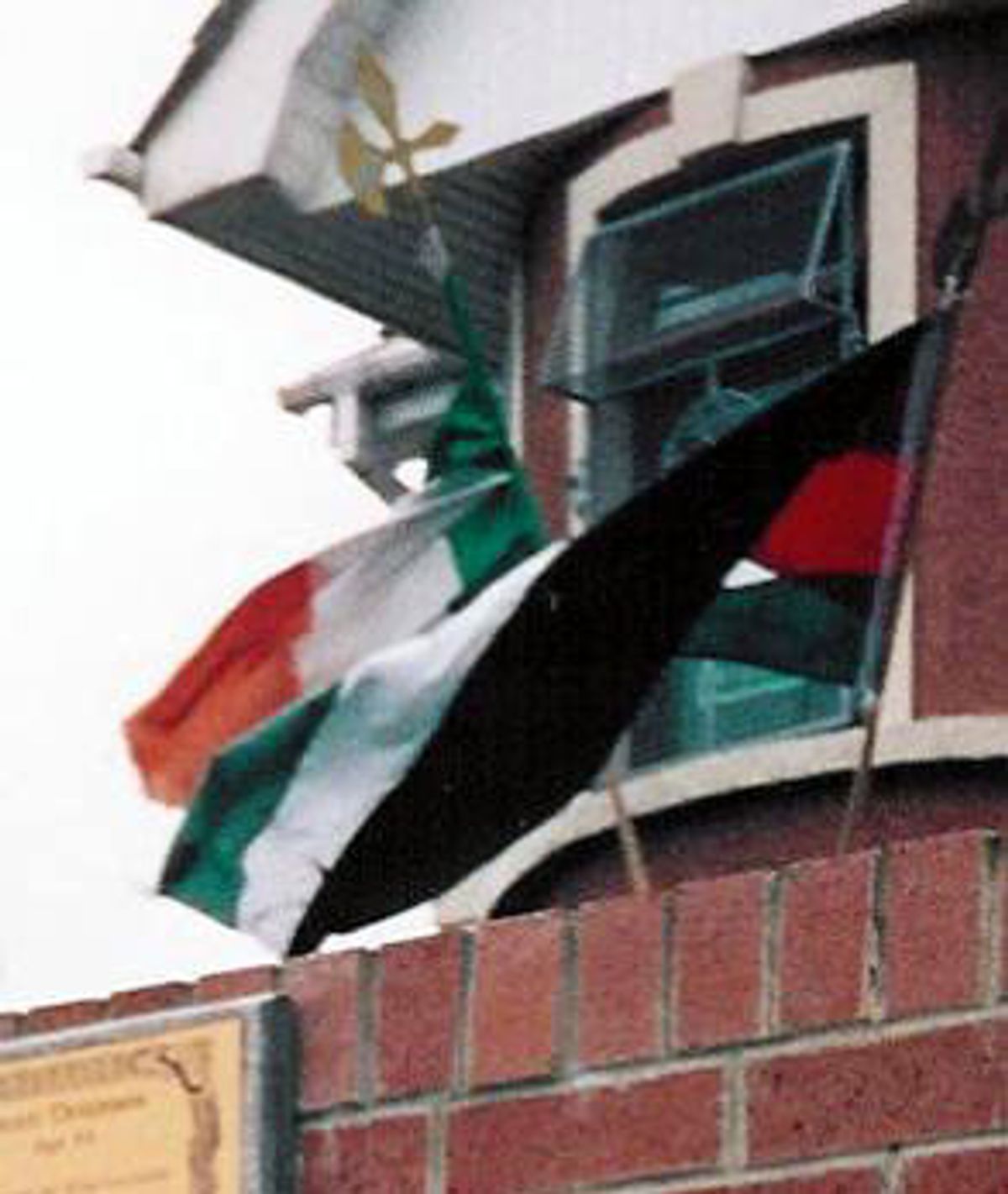 My American friend and I took a taxicab tour around the city as Irish flags were raised atop storefront canopies and park fences while people ran through the streets waving the green, white and orange colors over their heads. Moments before, center-forward Robbie Keane had scored Ireland's only goal in a first-round tie with Germany in the World Cup. People were going nuts.

But within minutes, our tour guide, Paddy, had delivered us from an ebullient patriotic Irish fervor to signs of a much more ominous type of flag-waving. Driving through perhaps the best-known Protestant neighborhood, the Shankill Road, we saw numerous English flags paired with Israeli flags. It appeared that Israel had found itself a new ally.

From the moment I arrived in Belfast to learn more about the Catholic-Protestant conflict that has haunted this island for close to 400 years, I had used the Palestinian-Israeli conflict as my lens of understanding. I had lived four of the past nine years in the Middle East, the last two years spent (with a year each) in both Jerusalem and Cairo. And yet, after 30 minutes on the tour, I was startled to see how intensely many of the participants in this conflict identified with those in the Middle East.

As an American Jew, the alignment of Northern Ireland Protestants with Israel flabbergasted me. I had seen Israeli flags hung in both Israel and the United States, but to see the blue Magen David, or six-pointed star, raised proudly on the streets of Belfast was an entirely strange experience. Thereafter, things got even stranger.

As we drove through a second Protestant area, called the Village, we noticed graffiti encouraging the Israeli prime minister to "Go on, Sharon, K.A.T." -- the last word an acronym for "Kill All Taigs" (derogatory slang for Catholics) -- in addition to spray-painted slogans melding Gerry Adams, president of the Irish Republican party Sinn Fein, with Palestinian Authority president Yasser Arafat, calling him "Gerry Arafat Adams."

Soon after, we saw Israeli flags and pro-Israel graffiti next to graffiti, murals and flags in support of pro-Protestant paramilitary groups. These were groups such as the Ulster Freedom Fighters (a nom de guerre of another paramilitary group, the Ulster Defense Association) and the Ulster Volunteer Force, the paramilitary wing of the Popular Unionist Political Party -- groups that many Irish Catholics deem to be terrorists. Even stranger, a small number of swastikas appeared in the graffiti in some of these Protestant areas. Asking about the apparent discrepancy, I learned that the UDA had alliances with various United Kingdom neo-Nazi groups, such as Combat 18. The anti-Jewish doctrines of those groups seem to be conveniently overlooked by some UDA supporters.

My gut reaction told me that this show of support by Irish Protestants for Israel was meant to imply that Gerry Adams and the IRA were terrorists, just as Yasser Arafat and various Fatah offshoot groups, such as the Al-Aqsa Martyrs Brigade, are understood by many Jewish Israelis to be terrorists.

According to Tony Gallagher, a professor in the graduate school of education at Queen's University in Belfast, my first reading turned out to be somewhat accurate. According to Gallagher, some of these paramilitary groups are expressing a belief that the British government should resort to a military response against violent extremists within the IRA, like the response of Sharon and the Israel Defense Forces to such acts as Palestinian suicide bombings. "Protestant sympathy for Israel is most likely based on an assumed commonality of interest in opposing 'terrorism,'" Gallagher said.

Another interpretation of this connection, and one replete with religious elements, was explained to me by my American friend studying in Belfast, who said that some Protestants align with Israel because they, too, identify themselves as members of one of the Lost Tribes of Israel who continue to be persecuted -- in this case, they believe, by Catholics.

But comparing the Catholic-Protestant conflict with the Palestinian-Israeli conflict gives rise to another, more obvious interpretation -- one that most Israelis, Jews and Northern Ireland Protestants would surely be unhappy with. The ancestors of today's Irish Protestants are seen by many to have been colonialists, foreigners who took Ireland in the name of the British royal crown. And so too, there are some who see many of today's Jewish Israelis as descendants of colonialists: namely, the early Zionists who moved to what was then called Palestine in hopes of creating a Jewish state.

Gallagher points out that while the Israeli flag phenomenon is new on the streets of Protestant neighborhoods, many Irish Catholics have aligned themselves with Palestinians for decades. They have not only placed Palestinian flags alongside Republic of Ireland flags in countless Belfast neighborhoods, but in some of their famous building-sized murals they have also featured Gerry Adams with the likes of Yasser Arafat as well as Nelson Mandela. One famous mural even depicted an IRA affiliate standing next to a PLO affiliate with the overhead slogan "Two Nations, One Struggle." Even today, if one visits the Northern Ireland Sinn Fein headquarters in West Belfast, Gerry Adams' main office, one will find a large Palestinian flag hanging next to that of Ireland.

Gallagher believes that Catholic organizations such as Sinn Fein have had "a general orientation to support groups which they would see as representing oppressed people engaged in liberation struggles against more powerful states. Probably the most overt contacts are between Sinn Fein and Henri Batasuna, the radical Basque group."

He also added that "as far as I can recall, the first time that Palestinian flags appeared with any frequency in Nationalist, or Catholic, areas of Belfast was during the siege of Beirut [20 years ago]. At that time, however, this did not result in any comparable flying of Israeli flags in Loyalist, or Protestant, areas of the city." So, Gallagher theorizes, Palestinian flags have probably begun to reappear in Catholic neighborhoods in response to the Israeli flags, which, of course, may have been raised partly in reaction to the Palestinian flags. And more flags on both sides have gone up recently because of the Palestinian intifada that began in the fall of 2000.

But the flag-raising and graffiti are limited, he says. "Most people in Northern Ireland are and were horrified at the results of violence here and, I have no doubt, feel equal horror at the results of all the violence in Israel and the Palestinian territories. Throughout most of Northern Ireland there is no use of Israeli or Palestinian flags at all." So far, he contends, the escalating "flag war" is contained within a fringe minority.

Perhaps it can be best understood through an explanation by Ruarai McKenna, a 21-year-old Catholic student at Queen's University. McKenna told me that just as the Protestant connection with Israel is rudimentary, so too is the bond between Catholics and Palestinians. "The Catholics that have made this alignment have not done this out of a justification of PLO actions, such as the current suicide bombings of Israelis, but have connected with similar issues in identity." Maybe it shouldn't be interpreted any deeper than that, as a political identification meant to inflame. But it certainly seems to accomplish that.

Aaron Tapper is a graduate student in religious studies studying in California.