What's Jennifer Jason Leigh doing in "The Road to Perdition" -- and why's she missing that despondent, carnal air of hers? 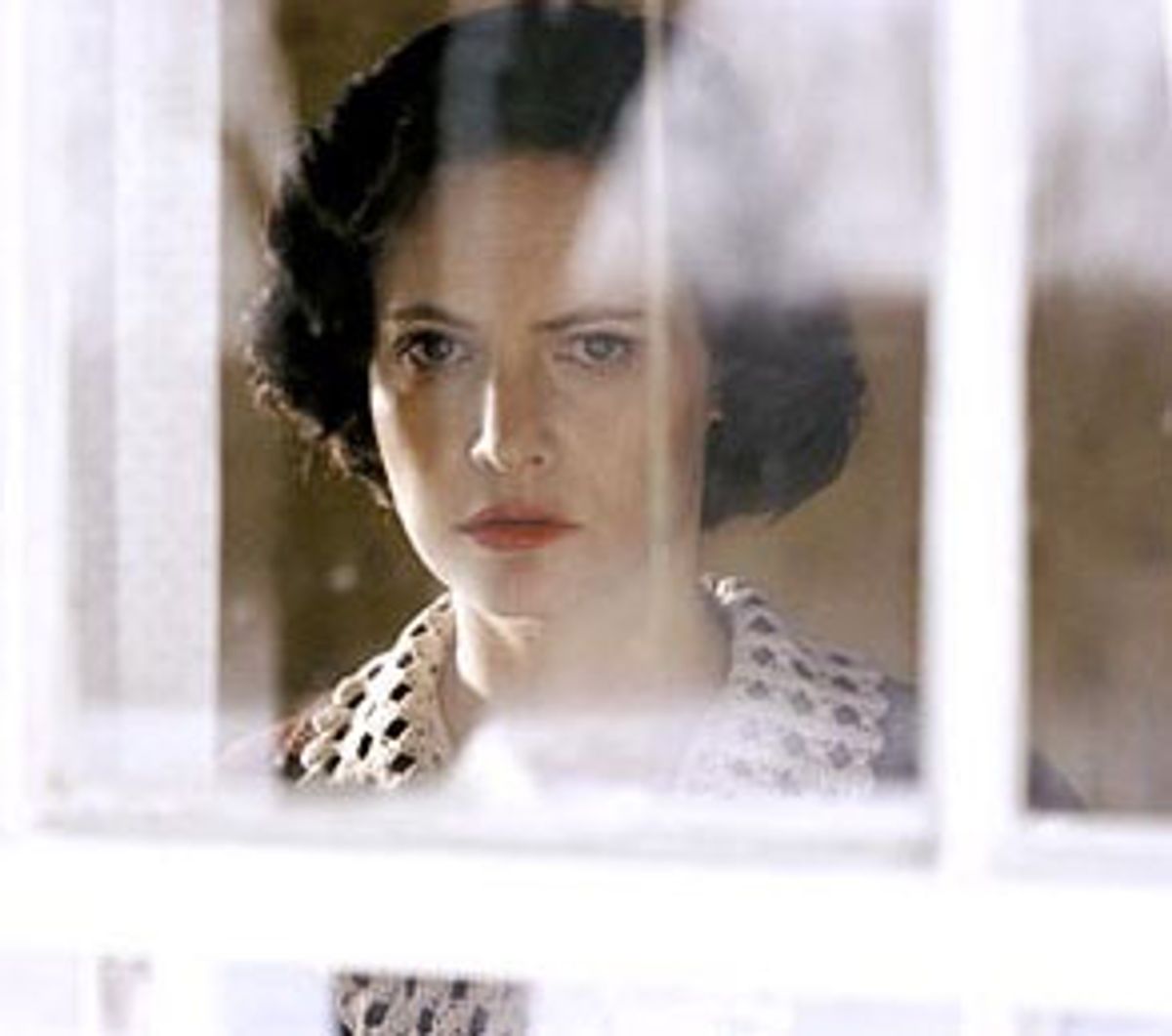 In all the high-class gloom and luster in which the movie "Road to Perdition" sets itself, and in the strenuous boosting that has developed in support of the picture, one intriguing thing gets left out. What the hell is Jennifer Jason Leigh doing there, and what are we to make of her?

Now, this is not simple partiality leaping to the actress's defense. I admire her well enough, though I'd have to admit that there have been too many occasions when I regarded her as a bit of a pain in the neck. Still, it is Jennifer Jason Leigh playing Tom Hanks' wife, and Ms. Jason Leigh is, if not quite a star, then what you'd have to call a female lead. When you discover that she's in the picture, you take it for granted -- as she may well have done herself in signing on -- that she's going to have something to do, to say, to register.

Not that she emphatically looks like Jennifer Jason Leigh. But, in fact, when you first see her and you realize all the steps she has taken not to look like herself then you naturally jump to the conclusion that here comes a real acting job -- and hence a real role. She looks plainer, older, sadder, half-erased, minus that despondent, carnal air of hers, and saddest of all, deprived of that nagging urge to say awkward, insistent, difficult things that any careerist sweetie-pie would just swallow. In other words, you see you've got Jennifer Jason Leigh and you easily conclude that she has some pointed remarks that are not going to go away of their own accord with a kiss and a promise.

Moreover, as the wife to Michael Sullivan and the mother to his sons, it's quite likely that she'll be the one to insist on talk, on words, on spelling out those feelings that the men in the family have made a religion of ignoring and burying. You expect a scene where that special whine she has begins to shave the very skin off Tom Hanks' obdurate face. So it's right and promising that Ms. Jason Leigh has a pinched and wary look whenever she gazes at her men, serves up their flat dinner or sees their wicked benefactor Mr. Rooney. You could swear she knows it all and may have developed cancer from the knowing -- Jason Leigh is that good as an actress.

But she says not a word about the situation or the problem. Indeed, although I'm not going back to the dreary picture to check it out, I doubt that she has as many as a hundred words before she is killed. If you said it was a bare 27, I wouldn't be calling you a liar. Not that she really gets her death scene so as you'd notice. Though there is a little bit more to see and hear than there is with Hanks' reaction to the murder of wife and son. All you get in this cripplingly artistic film is the far-away moan and bellow of grief as Hanks, several stories away, discovers the bodies. Indeed, that moment is done with such objectionable refinement that you marvel that Hanks' agent didn't sue the makers of the film because of the infernal suggestion that Tom couldn't play the big distressing moment.

Anyway, that's the end of Jason Leigh, so you're left asking yourself why she took the part? Was there more of it once? Come to that, is it in any way fair by the rules of such genre films that she should be executed, as well as the innocent son? Let's not bother to ask how far such actions conform to the real actions of criminals. This is only a film about films noirs, about criminals on screen. And I think this is unsporting -- it's over the top, and it would earn instant rebuke, even if Mr. Rooney's nasty kingdom does need to rely on the silence of the older son, the one who saw the business killing. The murder of the wife is gratuitous, yet it's a way of treating and disposing of awkward and supernumerary women. It's a way of cleaving to that daftest, deepest urge -- that only men count.

Some people have compared this (and other things about "Road to Perdition") to "The Godfather." That's a crock. In "The Godfather," in two parts at least, Coppola set Kay (Diane Keaton) up as the ignorant, innocent woman drawn into the family and then shut out as she becomes aware and critical. And Kay is not killed -- no matter that Michael Corleone knows he can kill anyone. He has to listen to her, just as the audience has to recall the woeful face of Kay being excluded from all those essential, inner family moments. The criticism may be mute, but it is there.

Which is a great deal more interesting than introducing a wife and a mother and a female character (almost the only one in the picture) and then whipping her away before she can do or say anything. "Road to Perdition" is a pretentious, bad movie and one clue to its inner decay is this abject neglect of its female character.