The beautifully shaped and delicately calibrated kids' movie will wow adults with vivid colors and a sweet story. 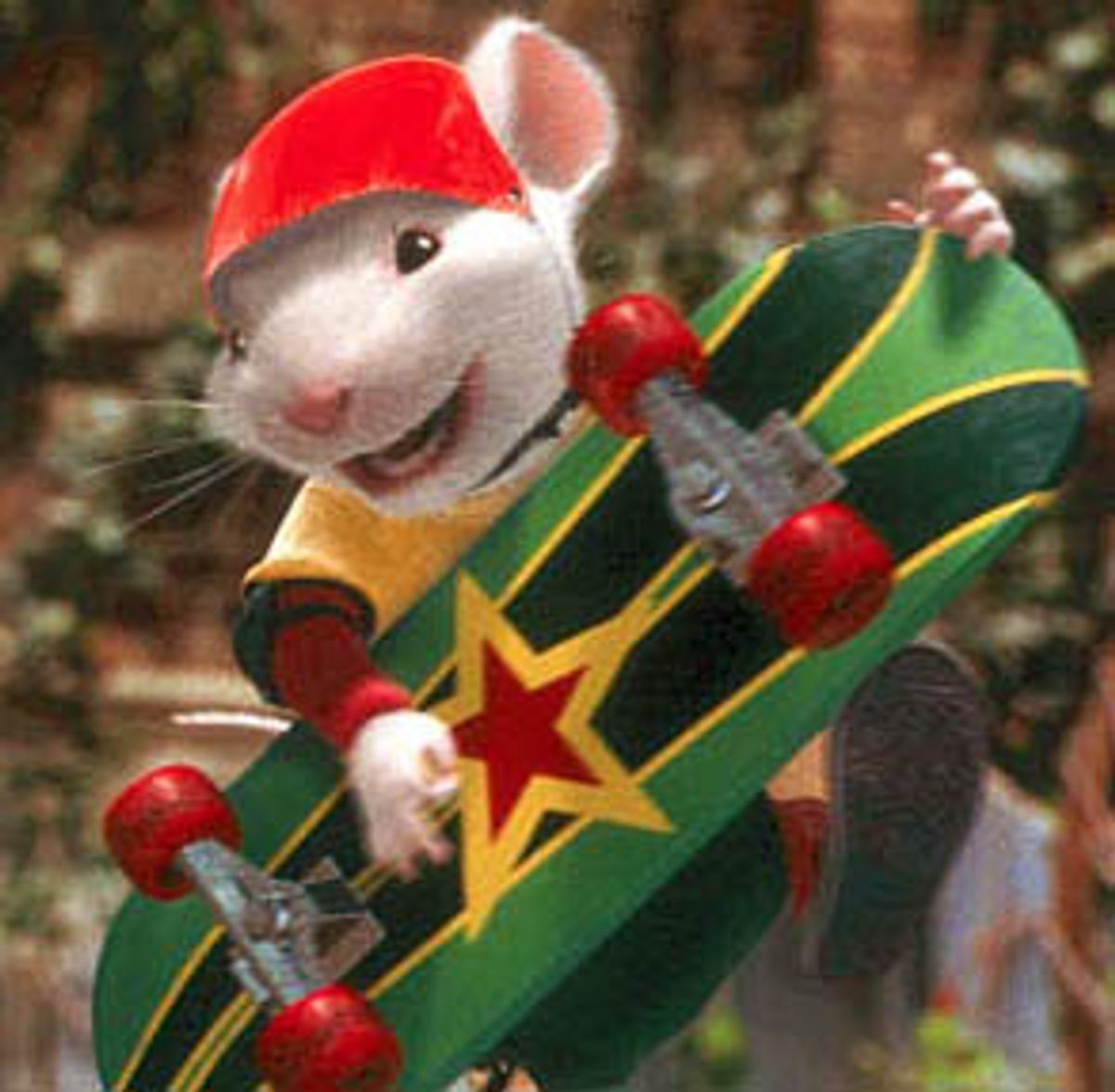 Kids aren't the only ones who take joy in the color of movies: I know lots of grown-up moviegoers who swoon over the polychrome pleasures of movies like Jacques Demy's "The Umbrellas of Cherbourg" and "The Young Girls of Rochefort," or the mad-genius collaborations of Michael Powell, Emeric Pressburger and Jack Cardiff like "Black Narcissus" and "The Red Shoes." And I recommend Dario Argento's "Suspiria" as a safe alternative to hallucinogenic drugs (though you should still refrain from operating heavy machinery while watching it).

But movies that revel in color are few and far between these days, and they're not usually aimed at adults. And aren't grown-ups, most of whom work all day and worry plenty at night, more in need of color than anyone? "Stuart Little 2," just like its predecessor, the marvelous "Stuart Little," is a movie that invites you to sink into its vivid look. From the marigold, saffron and crimson wardrobe of Geena Davis (the perfect accent to her own lovely, vibrant, real-life-cartoon coloring) to the Jolly Rancher-red of Stuart Little's convertible roadster, "Stuart Little 2" hits every color note just right. It's a visual antidepressant.

The color sense of "Stuart Little 2" is its most immediate and most obvious pleasure, but it would count for very little if the movie weren't as beautifully shaped and as delicately calibrated in tone as it is. In "Stuart Little 2," the mouse known as Stuart (once again borrowing the voice of Michael J. Fox) has become a fully integrated and beloved member of the human Little family, headed by Mom and Dad Little (again played by Davis and Hugh Laurie), and rounded out by George (Jonathan Lipnicki) and a new addition, a toddler sister named Martha (Anna and Ashley Hoelck). In addition to being a full-fledged Little, Stuart is an accepted and well-liked mouse in the community -- one of the movie's in jokes is that people seem to have stopped noticing his miniature size. He plays on the peewee soccer team (much to Mrs. Little's horror; she lives in constant fear that he'll get squooshed) and drives to school in his little red car. (When Mr. Little accuses Mrs. Little of being far too overprotective of Stuart, she says, "I let him drive his car to school, no other mother lets her kid do that!" And she has a point.)

But Stuart will always be something of an outsider, and he's reminded of it in big and small ways. There are times when George prefers to play with his normal-size kid friends; and Stuart's mother worries about him so persistently that she sometimes smothers him. That's why he's thrilled when serendipity brings him a girlfriend in the form of a flirty yellow bird named Margalo (Melanie Griffith), who is just his size, albeit a member of a different species.

But Margalo isn't all she appears to be. And that's where "Stuart Little 2" strikes its muted note of melancholy. The best kids' movies have just the right amount of gravity and sadness -- not so much that we feel we're being mercilessly milked (as in Walt Disney's unconscionable "Bambi"), but just enough to tap into those hidden wells of wistfulness and longing in all of us. When Stuart and Margalo sit side by side in Stuart's car at the drive-in (it's really just the screen of a portable TV), they trade quiet secrets as a scene from "Vertigo" plays in front of them. The gentle joke is that just as Kim Novak's character isn't exactly as she appears to Jimmy Stewart, Margalo isn't quite what Stuart thinks she is. (There's also a later nod to "Vertigo," set inside a skyscraper's top that resembles a dizzying belltower.) It all ends well, of course, but the subtle shifting of moods helps deepen and enrich the story.

"Stuart Little 2," like the first movie, is set in Manhattan, and it's very much a city fairy tale. The Littles live in the same townhouse on Central Park (it looks as if it's made out of gingerbread), but, unlike most real estate in the city, their property also includes a nice outdoor garden that looks almost like a real backyard. Stuart takes off in a toy plane and whizzes through Central Park, nearly taking the toupees off passersby; he scoots down the crowded sidewalks in his Stuart-mobile, zipping past shops and cafes and forests of human legs, and no one ever bats an eye. In the world of "Stuart Little 2," the city is a friendly, lively place, a setting for adventures that also comes with a little bit of danger (represented largely by Falcon, a magnificent, menacing winged creature with the voice of James Woods).

But all of these characters are at home in the city; it's part of their lives, and part of them. There's something about Stuart, especially in the way Fox speaks for him, that makes him seem like one of those small-town transplants who, instead of finding the city threatening, instantly take to it, recognizing it as nothing more than a collection of small neighborhoods. As Fox plays him, and as his character was designed, Stuart isn't aw-shucks cute. But there is something a little Jimmy Stewart about him (the Jimmy Stewart of "The Shop Around the Corner," not of "Vertigo") -- a quality of being perpetually at ease no matter how crazy the world around him gets.

As played by Laurie and Davis, his parents are warm and loving in a storybook way, but the movie knows when they get too sticky, and that's when Snowbell, the persnickety Persian (whose brilliant one-liners come to us by way of Nathan Lane), steps in for comic relief. The Littles have a special greeting: One will walk through the door and say, "Little hi, little low!" Another will respond, "Little hey, little ho!" Just as we're thinking that this dreadful Little greeting is a bit much, Snowbell says as much, with an indignant flounce of his furry pantalettes. At the same time, even the wiseacre Snowbell likes belonging to this family; he's the first one to roll his eyes at all the lovey-dovey glop, but we know it's not just the promise of the occasional tuna treat that keeps him close to hearth and home.

"Stuart Little 2" -- it was written by Bruce Joel Rubin and Douglas Wick, based, of course, on the character created by E.B. White -- is a beautifully rounded story: The narrative is coiled perfectly into its 78 minutes. Every loose end is tied up; the picture feels complete and whole and satisfying. Director Rob Minkoff ("The Lion King") keeps everything moving at the right pace: The action scenes are exciting without being overstimulating or overloud. The quiet scenes have a lively vibrancy to them. "Stuart Little 2" is a movie that demands you listen carefully: The picture's sound design is a marvel by itself, from the muffled tap-tap of Stuart's feet as he climbs first onto the wing and then into the seat of his airplane, to the gentle click of Snowbell's toenails as he pads along on a metal platform.

And you sure need great sound design to live up to the look of "Stuart Little 2." Cinematographer Steven Poster ("Donnie Darko") keeps everything crisp and bright. And production designer Bill Brzeski (who filled the same role on the first "Stuart Little" movie, as well as on Danny DeVito's wonderful and little-seen "Matilda") has outdone himself. When the Littles sit down in their dining room for a serious family conference, we can't help noticing that they're seated in red-and-white striped chairs -- but the stripes have a satiny texture, not a glossy one, which keeps them from looking too garish. The scheme is echoed in the rows of plates in the hutch behind Mrs. Little, with their deep red borders and white centers: Brzeski has perfected the art of putting humor (as opposed to jokiness) into the look of a movie. His colors don't vibrate annoyingly or jostle us: They sing, but they do so quietly, enhancing the action around them instead of detracting from it.

"Stuart Little 2" has a number of suitably encouraging themes for kids ("You're as big as you feel" is one of them), but they're played lightly enough so we don't feel weighed down by them. But its chief value is the way it transports us into a fantasy world of family warmth and adventure. When Stuart gets into trouble, the Littles (all of them, including little Martha in her car seat) bundle into a taxicab to find and help him. That's a great touch because, of course, it's the New York way -- to get from here to there in a hurry, aboveground, you hail one of these trundling yellow boatlike wonders.

In reality, you're likely to get jostled a lot more than the Littles do. But the sight of them all scrunched together somewhat uncomfortably in that cab, united by the unspoken but undeniable fact that one of their brood has gone missing, is one of the warmest and most wonderful of the movie's visions. There may be potholes in the street, but they sail over them; you can do that when you're in a movie with wings.