An interview with S/M photographer Barbara Nitke about her lawsuit against the attorney general, her art, and the thousand-yard stare. 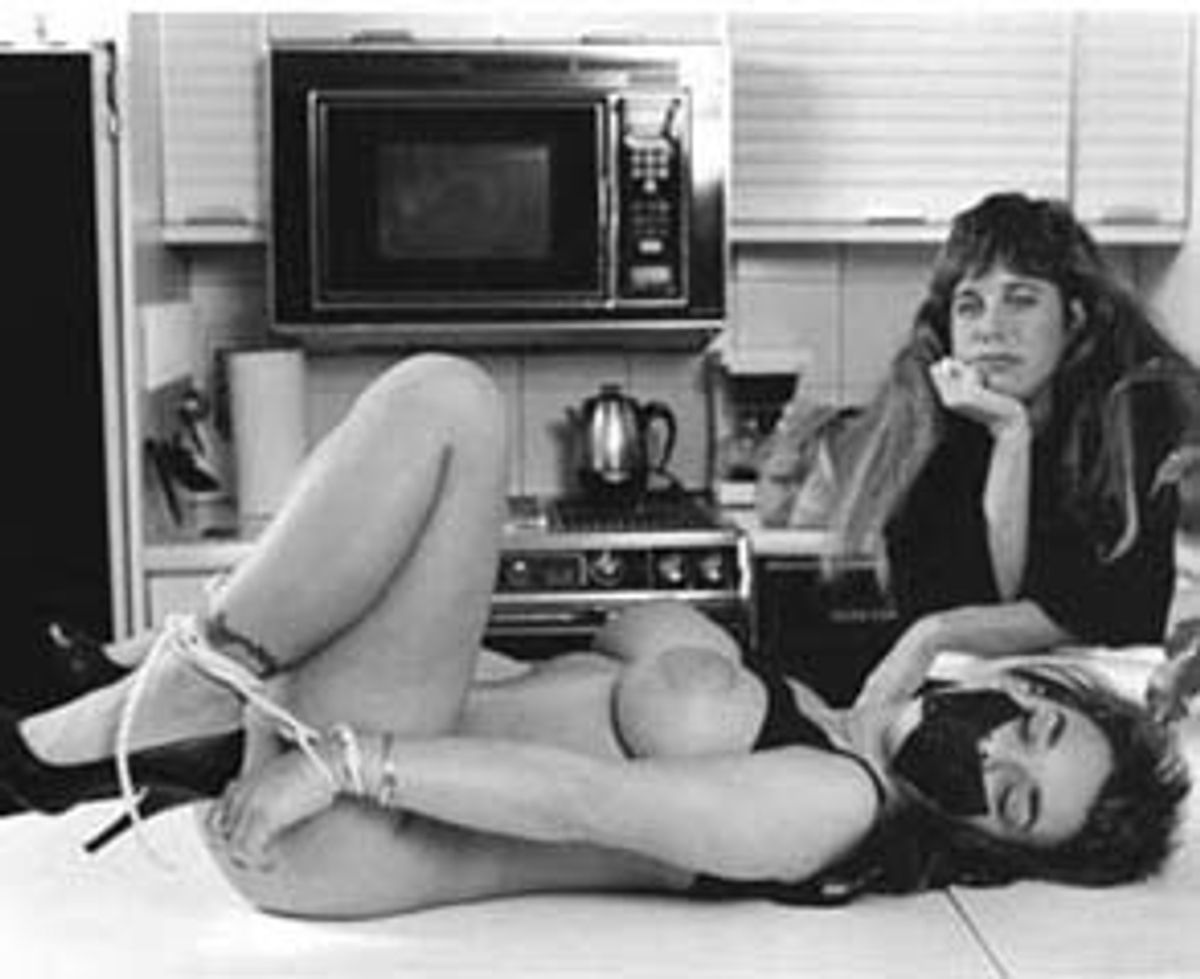 For 20 years photographer Barbara Nitke has portrayed masochistic couples lovingly torturing each other, with the same tenderness that Degas used when he painted young ballerinas. Now she is out for Attorney General John Ashcroft's hide. Nitke is the chief plaintiff in the National Coalition of Sexual Freedom's lawsuit against the Communications Decency Act -- Ashcroft's pet law by which sexuality on the Internet can be, in theory, dictated by "local community standards." (The suit was filed in December 2001, the feds have filed a motion to dismiss, and Nitke and the National Coalition have filed an injunction that would prevent Ashcroft from prosecuting anyone until this matter is settled in court.) Seeing as the Web is omnipresent in the United States, the law means that the community standards of Smallsville could dictate what Web sites the citizens of Metropolis can browse. Perhaps even this gallery/interview could land me in some Podunk jail.

But I'm not scared. I met with Nitke at the Art @ Large gallery in New York, where this slender, intense-looking woman is having a retrospective of her work.

So you're taking on Ashcroft.

I didn't look at it that way when I took it on. To me it has nothing to do with Ashcroft. It's a bad law. The way you challenge a law is to sue the attorney general. When I saw the papers, I was a little bit, whoa.

I heard the owners of a San Francisco gay site were sued and jailed in Tennessee.

All non-pay adult sites have "I certify that I'm over 18" buttons you have to click in order to enter. Is that legally binding?

I consulted a lot of lawyers when I put up my Web site, BarbaraNitke.com. I was advised to do that. No one is really convinced that it will hold up. It's just, "Click here: I'm 18"  how is that going to hold up? But it serves as a warning. I consulted with the lawyers because I know to stay on top of these things. You always feel like you are a sitting duck. I haven't had any problems yet, but I could. What makes me feel great about the lawsuit is that I'm being pro-active. I'm taking charge. I'm saying, "This is a bad law," instead of just waiting to turn into a victim.

Have you seen the enemy?

Seen the enemy! Oh my god.

I mean have you met any religious groups who are eyeing your work?

A couple of photographers told me that prior to Sept. 11, Ashcroft was gearing up to really go against pornography and sexually explicit art in all forms of media.

We heard that. Bush has an obscenity czar in place [Andrew G. Osterbaan, who heads the Justice Department's Child Exploitation and Obscenity Section]. They've been having meetings with local and state governments with how to pursue obscenity cases. We know they're revving up to do this again. That's the other reason for saying, "Let's us do something, for a change." Do you know the Jock Sturges case back in the Reagan era? He was charged with kiddie porn. The FBI comes into the guy's place and take everything he owns and put him through hell for four years. He won finally, but at what cost? Jock Sturges was able to get money behind him. The photographic community supported him. But I'm sure there are cases that we don't hear about. The people who don't have the wherewithal to raise money, and they end up pleading guilty. If I had a felony obscenity charge that I had to fight, I don't know what I would do. I don't have those kinds of resources.

Just to play the devil's advocate -- when I was 15, I babysat for money. Once I put the kids to bed, I'd sneak in the parents' room and rifle their drawers looking for Playboy magazines. Remember that back in the 1970s, dirty magazines were sold behind the counter. So I can't imagine being 15 and having access to the sexual imagery available on the Internet -- women with goats, women sucking 15 penises at once -- it would have changed my young innocent life.

Yes. What would have happened to you? Would you have been possessed by the devil? What do you really think the effect would have been?

Let's use this to segue to your career. How did you begin taking the photographs you take?

[Looking at a Nitke photograph of two fully clothed women slumped in theater seats looking up at something with half-shocked, half-curious expressions.] What are Sharon and Carol looking at?

I love your shots of naked people sitting around smoking cigarettes between shots.

Your photograph of a naked couple eating fire is kind of a Diane Arbus subject.

You think so? I like Diane Arbus' work, but I think she was fascinated with freaks because she thought they were mirroring some part of her. I don't think people are freaks. These people are my friends. I have a different view of the people that I am photographing. To me they are ordinary people, and I mean that in the best sense. Those fire people are performers. They have their own little traveling circus. That couple has been together for 10 years.

Not to be personal, but you're not judgmental about S/M -- do you partake in it?

Not directly, but I'm proud to be a member of the leather community. I'm a voyeur. I am nonjudgmental about it. What I see is people who really love each other who just have a different way of expressing it. That's genuine to them. I think it should be honored. I think all sexual outlets should be honored.

They're not doing anything but expressing love. I think if anything they are so careful about being safe. They negotiate everything up front to make sure that no one is being hurt in any way that they haven't wanted to be hurt. I admire them as a community how they've managed to do edgy sexual things in a really good way.

Has it reached mainstream USA?

I think S/M has always been mainstream. It's underground, but so many people participate in it. Is gay mainstream?

Sure. "Will and Grace." Once it's reached TV sitcoms, it's mainstream.

I think they should have a show like "Cheers" called "Hellfire." You used to be able if you were an S/M person to stop by [the N.Y. club] Hellfire and everyone knew your name. I always thought, "What a great sitcom this would be." But I guess I'm just ahead of my time.

Do you romanticize S/M?

I think my black-and-white photographs that I did for seven or eight years was a very romantic view, and now I'm trying to go to the passionate side by shooting in color. I only like to photograph couples who have a certain bond or energy between them. I'm trying to get more -- for want of a better word -- the visceral part of it.

Are you like a third wheel at these shooting sessions?

That's how it plays out. A lot of people I photograph like to do S/M publicly. They come from what's called "the scene," and that's a more public scene. They are more the people who like being photographed. I have photographed some private couples, but they don't want their pictures seen.

How has taking on Ashcroft affected your career?

I think its neutral. I don't think it's made a difference. The people who like my work, like my work. I really just think this is an important thing to do and that's why I'm doing it.

Do you ever take nature photographs or photograph something other than naked people?

No. I'm a people person. I love people. I make a living doing other types of photography for pay. I work on television sets. I shoot weddings. I do portrait work. I admire people who do great landscapes, but I don't think I could do it.

Could you do videos?

No. I always think of the single shot that sums it up. That's what I'm always trying to do. To do video you have to think in motion or how you're going to cut it together. That's not how my mind goes.

How has the critical response to your work been?

I haven't had a lot of critical response to my work. I had a one-person show in New Orleans a couple years back. The art critic from the Times-Picayune reviewed the show and said, "We all know S/M is a bad thing. For this woman to come along and try to make it look romantic -- the woman is clearly nuts and the work sucks."

Are you put in a position where you have to defend S/M?

The "bottom" -- is that lingo for the submissive one?

Yes. On all these sets they have safe words. I mentioned this at this gallery and there was this audible sigh in the audience. I realized that they thought people were abducted from the street and thrown into these movies against their will.

John Ashcroft probably assumes they're churchgoers who have been abducted off Main Street.

That was when I learned that I have to try to lay the groundwork. Otherwise people will misunderstand what I am trying to do with my pictures.