The founding chairwoman of the Internet's governing institution explains why we have to work with what we've got, even if it isn't perfect. 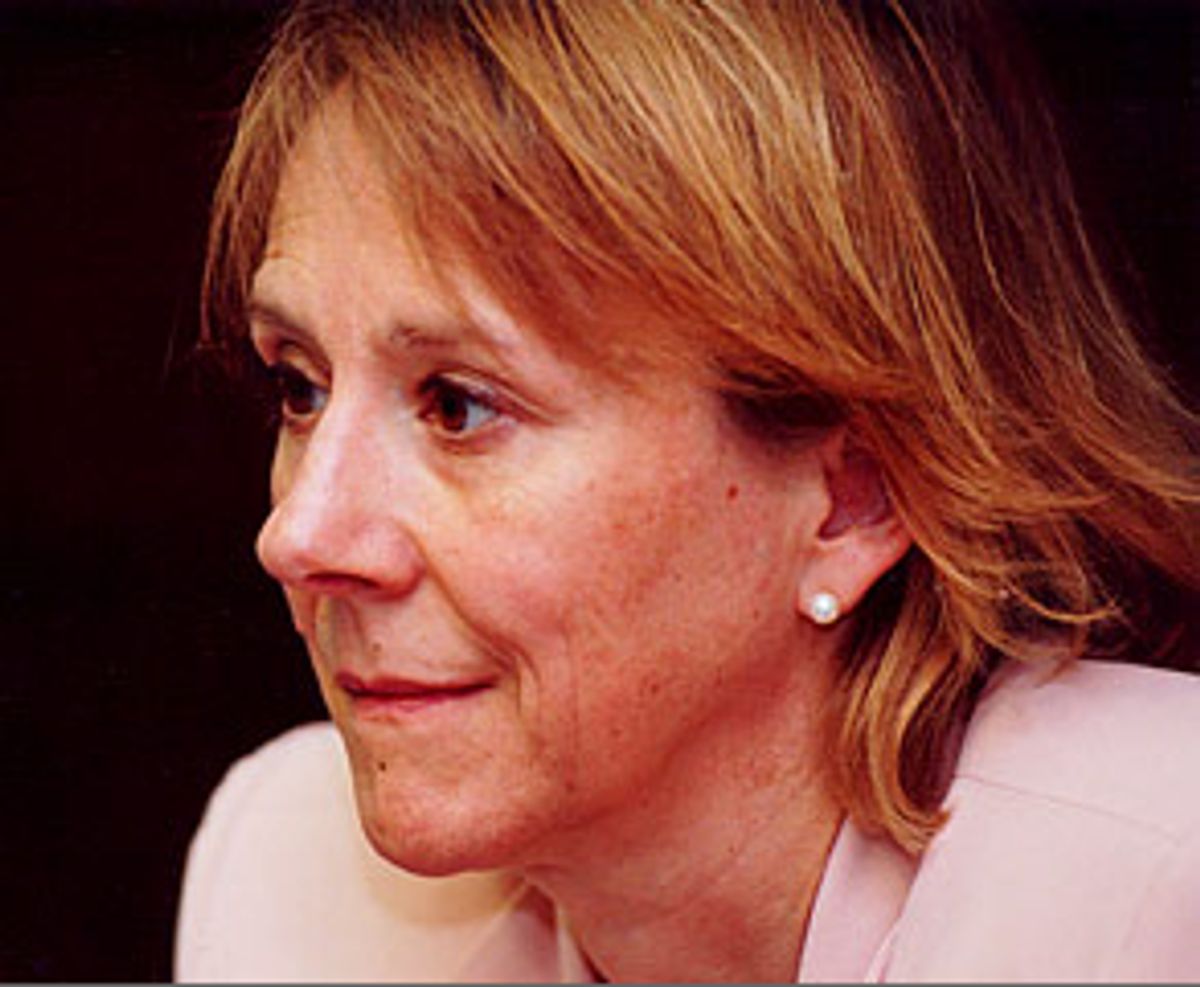 As the founding chair of ICANN, Esther Dyson has enjoyed one of the better vantage points from which to view the near constant controversy that has embroiled the governing institution of the Internet since its inception.

ICANN, the Internet Corporation for Assigned Names and Numbers, is an international organization entrusted, originally by the U.S. Department of Commerce, with the job of overseeing the allocation of Internet domain names. Critics of ICANN argue that it is overly secretive, beholden only to itself, and far too willing to allow corporate trademark holders to stake their own intellectual property claims in cyberspace at the expense of everyone else. Critics are also alarmed at ICANN's resistance to allowing the direct election of board members by the general population.

On July 2, Salon published an interview with John Gilmore, a software entrepreneur and longtime Internet visionary, that called for the outright abolition of ICANN. Gilmore is also helping to fund a lawsuit by Karl Auerbach, a popularly elected ICANN board member, that is demanding access to ICANN's financial books.

In response to the Gilmore interview, Salon received an angry letter from ICANN's chief counsel, Joe Sims, and was also approached by Esther Dyson, who sought an opportunity to explain some of the "nuances" of ICANN's operations.

What's your current involvement in ICANN?

My current involvement is after I stopped being chairman they created something called the At Large Study Committee, and I was invited to join that, but I wasn't chairman of it. It was chaired by Carl Bildt, who's the former prime minister of Sweden. Part of the issue is that the At Large program gets ... its strongest voices from Americans. And in a group like ICANN, Americans are insiders -- so it was important that the chairperson not be another American.

One of the biggest issues is voting for board members. And let's get real. The ICANN board at this point, right or wrong, is simply not going to accept that. Which to my mind is unfortunate because we have elected At Large board members and they're by and large reasonable people -- other than Karl Auerbach -- who unfortunately has some good proposals and it's counterproductive how he goes around trying to achieve that.

Why do you think it's such a non-starter to have elected members?

I do not agree with that but that's the board's position. ICANN exists. It's got a contract with the U.S. government. And you can disagree with them violently and say I don't want to have anything to do with them, or you can say, as I do, hey, I want to change this thing and I want to fix it. And I accept the reality that I'm not going to ask for the impossible, but I'm going to try to do two things. I want to change the attitudes of the ICANN board and help foster an At Large organization that will help them to change their minds because it turns out to be a reasonable and constructive organization that provides useful input. At Large users have a role in the governance of ICANN. But the question is how to make that constructive rather than incoherent, and how to get ICANN to listen.

So if not elections, what other method is there to get the public involved in ICANN?

Well, the long-term goal is elections, but it's not the near-term mechanism. Let's get real. I can't think of anything better than elections. You've got structures that make elections real, and one argument against them is -- I've heard from members who say "In my country we've had too many elections where you just go out and round up a few hundred thousand peasants and you pay them and get votes." And that's what the ICANN board in part is scared of.

First you have to understand there's two parts to this. There's elections of board members and then there's input into the policies, which I think in some ways is more important. When people sit down and they try to figure out rules for how the [domain name] registrars should operate, let's have some users sitting at the table saying what works, pointing out the problem.

But do you have that now? One of the criticisms of ICANN is that you don't.

No. Not effectively. Absolutely not. No. I mean, I'm not saying this is good. I'm saying I want to get inside and help it to change. But what you've got now is a stalemate where nobody wants to compromise. And my hope is that the Department of Commerce is going to force something of a compromise, by saying that we either will or will not renew your Memo of Understanding [a document establishing ICANN's institutional legitimacy].

But why should the Department of Commerce renew the memo? Why do we need ICANN?

We need ICANN to be exactly what it is -- in part. We don't need a big ICANN. It should be the place where you settle policy questions that need to be settled globally. Many policy questions don't need to be settled globally. As far as I'm concerned "dot-name" should have different rules from "dot-com" and I don't see that as a problem. So there are many policy areas in which I don't agree with how ICANN works. And one of them is simply the less power it has the better, but it needs enough power to resolve conflicts that do need to be resolved. And therefore it needs to have all the important players to be not forced in but seduced in by an attitude that says: Come join ICANN because this is the place that we compromise on policy.

You know, there are some things that need to be consistent, not very many. The problem is right now is ICANN's contracts for the top level domain names [.com, .org. etc.] are way too long. You measure them in thickness rather than length. There's too many specific rules. At the same time there are probably places where they should come together. They need to figure out what should be done with the WHOIS [database of information as to what Internet names and numbers are assigned to individual users] -- how that should be managed. They need to decide rules for each data element. It's not that there should be no rules. There should be a minimum.

One of the things that John Gilmore says is that we don't have to have a small number of top-level domains. We should have dozens or hundreds or thousands.

If people are redesigning the system from the start you'd probably do it entirely differently. But why could God build the world in only seven days, you know? Because he had no legacy systems.

Let's face it, you've got legacy systems. You may think they're immoral -- I don't, but you may. There are people who have trademarks and copyrights. Verisign has a very lucrative contract with the U.S. government. But the nice thing about the U.S. is you can enforce these contracts.

At some point you should interview Bob Frankston on this. One of the problems with the domain name system is that you've got identifiers mixed up with names. Your American Express number is an identifier, whereas a name has market value, it has connotations, etc. And they should have had a system of unique identifiers that were not names and everything would have been 10 times simpler. And Frankston says let's create a new top level domain that's strictly numbers and then let's gradually move as many people over to it as we can, and then let's have different systems -- things like RealNames -- that simply point to the unique identifiers. And then you don't need to have this globally consistent naming system.

But unfortunately we've got it. In the long run you could create thousands of top level domain names, but you'd end up with the same issues. As long as you have names you're going to have scarcity, and artificial scarcity. ICANN should create a whole lot more top level domains and take the artificial scarcity out of the market. But you do want a global system with a unique root that is kept consistent.

I probably should be very careful not to get messed up in a lawsuit. It's very unfortunate, and I would say both sides are to blame that Karl Auerbach cannot get along with them. The board despises him, and they won't listen to his good ideas, and he has some. And so he's not productive. Look at me. The American at-large community despises me but I think I'm doing more good for At Large by working with ICANN than I would if I were out there simply criticizing them, not trying to improve them.

Do you think that the lawsuit will take some of the secrecy out of ICANN?

Well -- I was chairman. I don't think anybody's getting rich out of ICANN. The directors are volunteers, which I'm not sure is a good idea. You look at the entire budget, and there simply isn't a lot of money there to steal.

So why not release the numbers?

Because as I said both sides are unhelpful. I don't think ICANN has anything to hide and they should have just opened up the books. Big deal. There's nothing in there. They're standing on a principle which I don't think is worth defending. At the same time I think Karl should just sign [the non-disclosure agreement] and take a look. But instead he wanted to make a big fuss and do a lawsuit.

Let's get real. In the scheme of things, the amount of money involved here is kind of piddling. A lot of people that talk about this think a million dollars is a big deal. But look at WorldCom -- there are better places to spend your time if you're just looking for misuses of money.

You've said that ICANN needs more resources. What does it need? And do you think it's going to get them?

If they sort it out it will. It doesn't need a huge amount -- but take this thing about transparency: The real reason ICANN got such a bad reputation for transparency is because they had closed board meetings, which was a mistake. It's still dealing with that legacy. But the fact is it's hard to get an answer from them. And the reason is they don't have anyone to write e-mails to the people who ask questions. Ask any P.R. guy. It takes resources. It's one thing to have everything on your site that nobody can understand because it's all written by lawyers, and it's another to have people answer your questions. Unfortunately, yes it requires resources. It's not simply a matter of saying we're going to be responsive. It takes people and money. The problem is people aren't willing to fund it because they don't see it working effectively. The moment they see it working effectively, they'll fund it.