People doubt he can manage the economy and less than half think he should be reelected. And yet his approval ratings are sky-high. 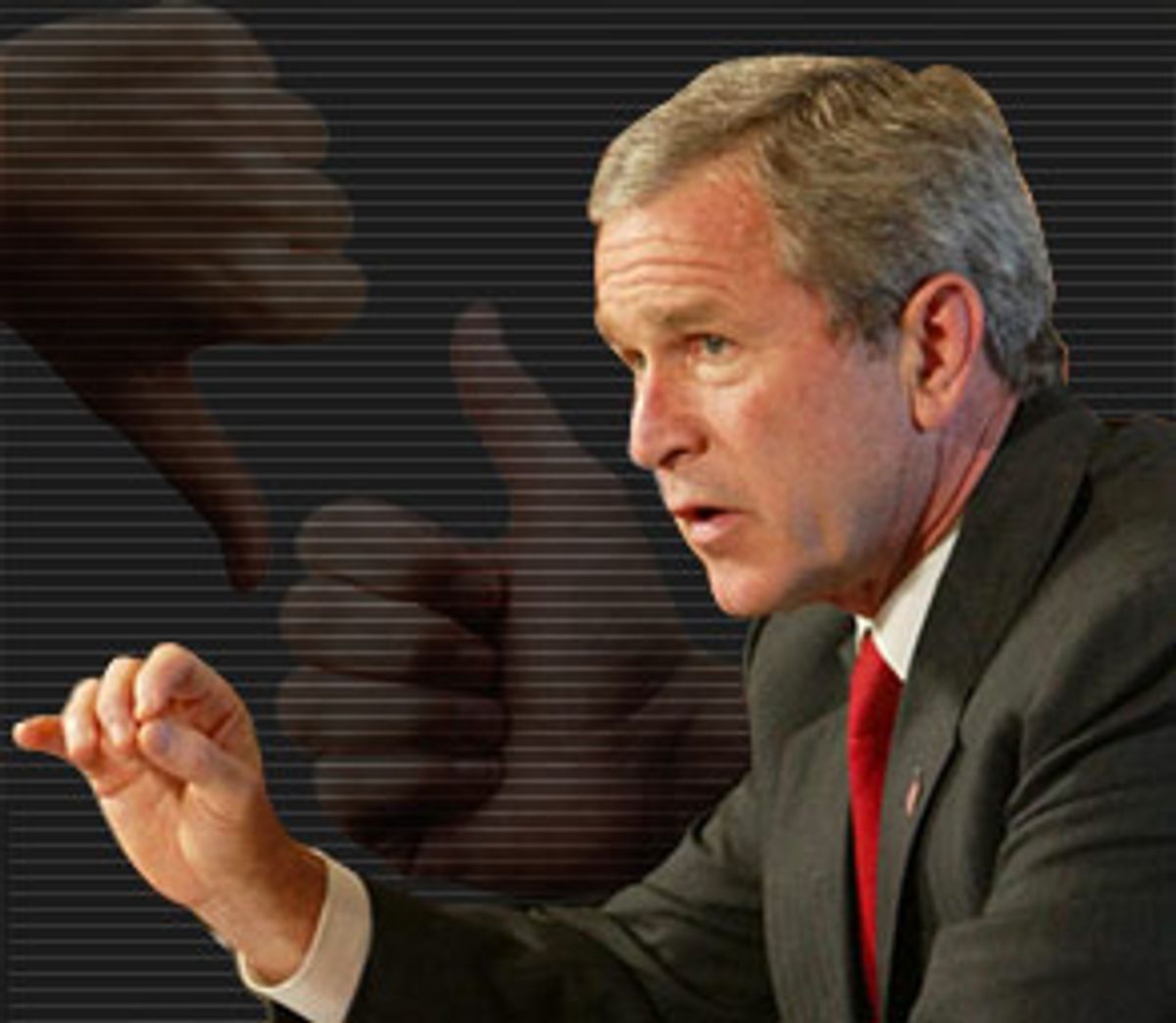 During the 2000 election campaign, Texas governor George W. Bush promised to change the poll-driven culture that permeated the Clinton White House. But as the news of Wall Street scandals spread, questions about Bush's own business dealings persist, and Americans grow nervous about the economy, President Bush and his advisors will no doubt be consulting a chapter from the Clinton playbook: How to defy a storm of bad news to remain aloft in the polls.

According to recent surveys, people harbor growing doubts about Bush's ability to steer the economy toward prosperity; yet for now, they continue to give him high approval ratings. The apparent disconnect between the two provides a curious insight into the American voter, and it presents Bush's political team with a curious challenge.

Of course, thanks to the rally-around-the-flag effect of Sept. 11, Bush has had a historic head start in the polls, riding high far longer than previous presidents who weathered national crises. According to Gallup, which began tracking presidential job-approval ratings in 1938, Franklin D. Roosevelt's rating reached 84 percent following the attack on Pearl Harbor but fell to 70 percent seven months later, even as patriotism swelled at home and America began fighting a world war. By contrast, it's been nearly a year since Sept. 11, and Bush, according to Gallup, still has not fallen below 70 percent.

The challenge for Bush is whether he will able to baffle the experts and frustrate his critics by posting strong job-approval ratings in spite of several weeks of bad news, the way Clinton fended off a few years' worth of bad news.

"Before Clinton, the more negative press you had, the lower your approval rating. That was the rule," says John Orman, professor of political science at Fairfield University. Today, the hard link between the two has softened considerably.

Clinton enjoyed some of his strongest job-approval ratings during the impeachment drama. In fact, on the day in December 1998 when the House of Representatives voted to impeach him, Clinton earned the highest rating of his presidency: 73 percent, according to Gallup. Americans expressed to pollsters their distaste for the man and his morals, but they rewarded Clinton again and again with generous ratings of 60 percent or more, numbers the Reagan White House would have cherished during the closing years of his two terms.

Bush's high-wire act hasn't approached the skill level of Clinton's, and if the domestically popular war on terrorism were to fade from view, he may never meet his predecessor's standard. But thus far he's holding his own, with poll respondents giving him strong job-approval ratings even as they express growing doubts about his job performance.

For instance, a recent NBC News/Wall Street Journal poll found 46 percent disapproved of the job Bush was doing specifically on "the problems of the financial markets and major corporations." Forty percent approved. Yet the poll found Bush's approval rating remaining a robust 67 percent.

A CBS News/New York Times poll conducted between July 13 and 16 found that nearly six in 10 people think the economy is worse off than it was two years ago. Only half think Bush is actually in control of the White House. Nearly half think the country is on the wrong track, the highest percentage in a year. And less than 20 percent think he's telling the truth about his old Harken Energy business dealings. Bush's approval rating? Seventy percent. (It subsequently dropped to 65 percent in the latest CBS/New York Times survey.)

And then there are the reelection numbers. According to two new polls, when respondents are asked whether Bush deserves to be reelected today, less than half say yes. In the July 11 Ipsos-Reid/Cook Political Report poll, the number of people who would vote for Bush if the vote were today fell to 42 percent. That's down 6 points from the actual 2000 election results. Bush defenders dismiss those polls, saying that the questions are too generic; if pollsters gave voters a clear reelection choice between Bush and an actual opponent, such as Sen. Joseph Lieberman, D-Conn., they say, the president would win handily.

Despite those doubts, Bush's percentages on the job-approval scale, according to virtually all the polls, remain safely in the 60s and even 70s. Pollsters suggest a possible lesson from both the Clinton and the unfolding Bush examples: The public tends to shield a president facing an important task, whether it's maintaining a robust economy, as Clinton did, or waging a war on terrorism, as Bush is doing.

"People believe the war on terrorism is effective and Bush is at the center of it and he's too important to fail. They want him to succeed," says Democratic pollster Stanley Greenberg. "Their No. 1 priority is to make the country secure, and they won't pull back from him. Oddly enough, citizens protect leaders from folks who view this as a game, like the press and partisan critics."

Greenberg saw the same dynamic during the Clinton presidency. "I watched people in focus groups talk about his personal faults, but they protected him," he says. "They were just beginning to see real income gains and didn't want it endangered with partisan attacks. The public doesn't want failed presidencies -- they have consequences. That's not to say they won't vote presidents out. But they protect them."

Independent pollster John Zogby agrees: "I learned that with Clinton, the presidency is a sacred institution and a symbol of stability. People want a certain stability and it takes quite a bit to knock down a leader."

Zogby notes that Bush's "great likability factor" remains a strong plus. That trait, coupled with the sheer shock of the Sept. 11 attack on American soil, may be why Bush's current approval ratings have outlasted any seen during previous national crises. The last American president to sustain job approval ratings in the 70s was Lyndon Johnson, following the assassination of John Kennedy, according to Matthew Dowd, polling coordinator for the Republican National Committee.

Johnson, later driven out of office by the war in Vietnam, learned how dramatically those numbers can change. So did Bush's father. He hit a 90 percent approval after the Gulf War in 1991, yet within four months he'd lost 20 points as a sour economy continued to take its toll. By the eve of the 1992 election, Bush's approval rating had plummeted into the 30s.

For Bush junior, perhaps the only approval rating that matters will arrive in about two years. According to Dowd, no president in the last 20 years with a rating of 50 percent or higher in the summer has lost reelection in November.