Salon's new columnist looks at what the upcoming baseball strike and "Sex and the City" tell us about the looming one-year anniversary. 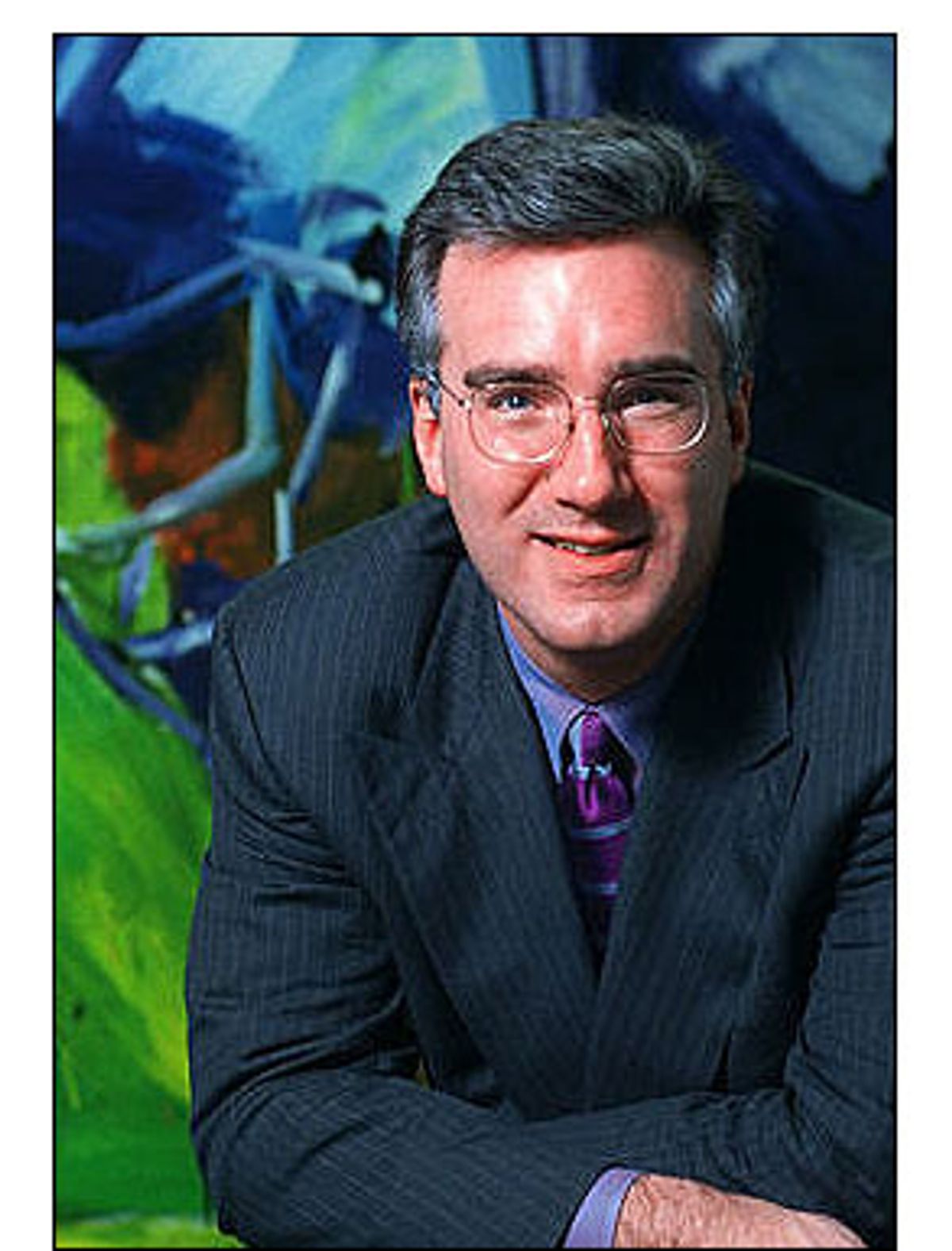 Editor's note: Salon welcomes its newest columnist, Keith Olbermann. Apart from what is widely known about Olbermann -- his work at ESPN, Fox, MSNBC, hosting the World Series, winning a Murrow Award for covering Sept. 11 for ABC Radio -- he would like readers to know about his hidden past. He began writing columns for sports memorabilia magazines at age 12, edited one of them at age 16 and was senior editor of Baseball Magazine at 19. He spent a summer as a baseball columnist for Sports Illustrated, has reviewed sports magazines for Contentville, covered the Oscars for the Los Angeles Times, ruminated on Monica Lewinsky for Time and written almost as regularly as he has broadcast, and for far more employers. He walked away from his "Big Show" at MSNBC after one too many days of covering Monica, famously saying, "And I thought sports was shallow." He believes in the Gold Standard, continues to root for the Washington Senators baseball team even though they moved away in 1971 and expects Judge Crater to turn up any day now.

July 25, 2002  |  That this country truly has never experienced a time of memorial like the one coming in September was underscored this week by Major League Baseball players, who showed they believe nobody will be thinking about last year's attacks as the anniversary approaches, and by the producers of HBO's "Sex and the City," who evidently believe everybody should be thinking of them, even while they're watching the bare breasts of Kristen Davis. Baseball is trying to tell us nothing changed Sept. 11; "Sex and the City" is saying that everything's changed, and those of us who like our entertainment to entertain us are trapped with little in between.

As baseball players march obliviously and self-righteously toward a strike that could bankrupt several franchises and eliminate 20 percent of the jobs in their industry, they are, from all evidence, wrestling only with exactly when to threaten to walk out. Sources disagree on the logic patterns, and even the process of selection. But they are uniform in reporting that the players are terrified of the public reaction should they actually be out on strike on Sept. 11.

The players are not, however, terrified of the public reaction should they be playing on Sept. 11 while preparing to strike just a few days later.

The distinction is as cagey, and as farsighted, as Tony Perkins playing the loony Jim Piersall in "Fear Strikes Out." The Red Sox want to move Piersall from the outfield to shortstop, and he wants no part of it. So, with great satisfaction, and to his blissful relief, he simply hides his infielder's glove.

That baseball fans -- even those labor-savvy enough to recognize the old management ploy the cognoscenti call a "forced strike" -- are spoiling for a fight should've been evident to any player who attended, or watched, the All-Star Game fiasco in Milwaukee two weeks ago. Possibly only in Milwaukee would the missiles that cascaded upon the field after the players gave up on this vanity license plate of a sports exhibition have been as relatively harmless as plastic beer bottles.

Presuming the strike deadline is imminent, anybody want to guess what the fans in St. Petersburg will be throwing at Nomar Garciaparra when his Boston Red Sox play the Tampa Bay Devil Rays on Sept. 11? Garciaparra recently announced that he'd hate to see the season interrupted or abandoned (Hello, Central? Send over a few dozen metaphors about that tied All-Star Game!). But he has a kid brother just starting out in the minor leagues, in the bowels of the Seattle Mariners' organization, and he has to do this for little Michael and all the others to follow.

Michael Garciaparra got a $2 million signing bonus from the Mariners. He's 19.

John L. Lewis and Cesar Chavez would be proud.

What the baseball players have forgotten in targeting Sept. 16 as a probable strike deadline, at least according to some news accounts, is that last year, Sept. 17 was the day the baseball season resumed. In the ensuing weeks, the game did more for the country than it had in generations. Last Sept. 17, baseball actually played a part, however small, in binding a nation's wounds.

I can summon effortlessly from my memory an image of an NYPD officer standing outside the New York Stock Exchange that morning. There was still so much smoke downtown that until I got within a few feet of him, I couldn't tell whether he was wearing glasses. I was there covering the aftermath for a Los Angeles radio station, but the officer wanted to talk baseball. I finally interrupted him and gestured at the stockbrokers walking up the center of the street as if to a concentration camp. "You don't understand," the cop replied. "I can get through this because I know that tonight at 7 o'clock I can put my feet up and watch the Mets and pretend they matter."

Incidentally, the material costs of a strike starting Sept. 16 and wiping out the entire post-season have been kept under wraps, but they are fairly easy to calculate. Collectively, major league players make about $12,035,714 per day. Their share of the post-season kitty is another $40 million. They could be out a total of $208 million.

As for the owners, Sal Galatioto of Lehman Brothers is perhaps the leading sports financial analyst in the country. He crunched the data he had -- all the nontelevision stuff -- for me. During our theoretical strike, the owners would lose $238 million in the regular season, and another $180 million in the post-season. The TV income, he didn't know.

Somebody else did -- somebody who had a copy of the contract between baseball and Fox. It turns out that just over 90 percent of that deal is for the post-season, so if there's no World Series, baseball owes Fox a rebate or refund of $300 million.

Put them all together and they spell a management loss of $718 million. But that's a minimum figure, and the reason for the possibility of an even higher one is perhaps the most fascinating element of the entire post-attacks entertainment economy. Fox got included in the deal a damages clause for lost advertising revenue. So if a strike wipes out the post-season, and Fox makes, say, a dollar for commercial time during some terrible rerun, instead of the $10 they could've gotten for the patriotism festival that is the World Series, they can submit a claim to an arbitrator, and baseball could be forced to pay the network as much as $230 million more, bringing the total loss to close to $1 billion.

With our luck, those reruns will be of this season's so-far disappointing "Sex and the City," which is over there at the other end of the Appropriate Taste spectrum. When it comes to Sept. 11, where baseball apparently took Mayor Giuliani's admonition to "go on with your (greedy) lives" too literally, the maestros of the Sarah Jessica Parker vehicle apparently ignored it, and are still stuck in the "the entire world has changed forever" mode.

If the last 10 months have shown us anything, it's that Americans are ready to bite whatever bullets come our way. But in between painful moments of real life, we'd like our entertainment to actually be, well, entertaining, thank you -- escapist if at all possible. What a relief it was, then, to see "Sex and the City" premiere last Sunday on HBO: the ultimate escapist show that flourishes because of charm and brilliant execution.

But the new 9/11-ready "Sex and the City" could not have been more heavy-handed in its desire to be "relevant" and "meaningful" had it stuck a Dan Rather newscast in the middle of the program. Depth was sought by designating New York City itself as Carrie's first love. Gotham's economic revitalization was encouraged by having the characters jettison the first mother of the bunch, Miranda, into a waiting taxi while the rest of them headed downtown for their compulsive shopping. And patriotism was introduced by forcing the three gals to chase sailors during Fleet Week, and even have Charlotte flash one of them.

What? Did nobody think of having Samantha swim out to troop ships?

The "Sex and the City" effort to make entertainment sensitive to the slightly new world around us is clearly more earnest and more commendable than the ballplayers' return to "Me first, and screw you if you think you're even second." Nonetheless, as a born-and-bred New Yorker who still can't listen to tapes of the radio reporting I did from here last year, my thanks, my applause for your intent, and these final four words to the show's producers:

Baseball Sex And The City