Steve Diet Goedde's photographs are what Ansel Adams might have made if he were into S&M. 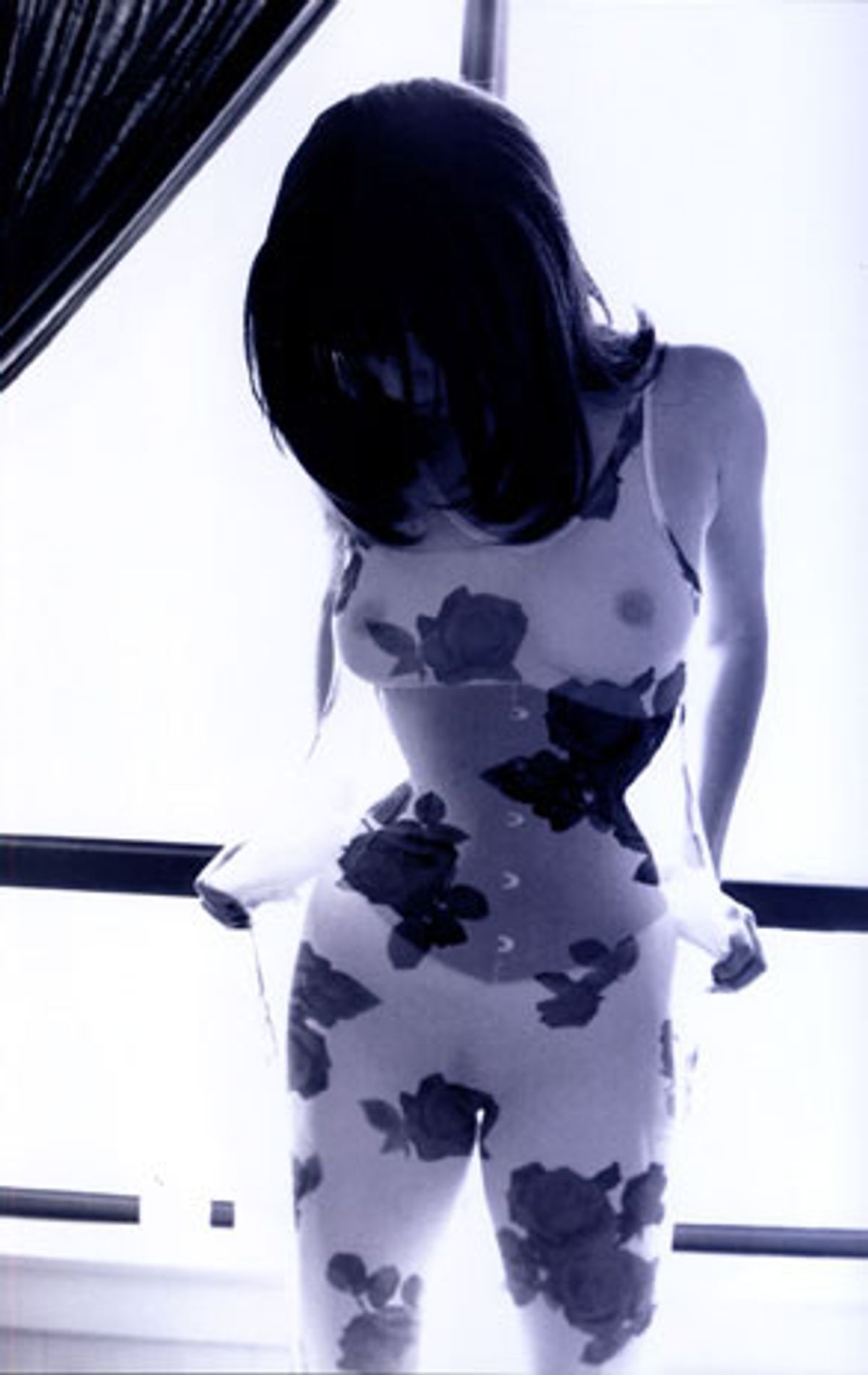 "Fetish" is such a loaded and, for some people, forbidding word that perhaps it's necessary to say what Steve Diet Goedde's photographs are not before we can say what they are. You will not, in his two volumes, "The Beauty of Fetish" and "The Beauty of Fetish, Vol. II," find multiple piercings, pain, uncomfortable bodily constriction, full-blown Gothic scenarios or any of those shaven-headed guys with devil tattoos who think it's real hot if they shove their tongue at the camera. And that may be a turn-off for people who think Goedde is softening the very notion of fetishism or, as photography critic Vicki Goldberg suggests (rather backhandedly) in her introduction to Volume I, making it an acceptable subject for coffee-table books.

Well, I've had "The Beauty of Fetish" volumes on my coffee table for about a year now for the simple reason that they are lovely. Which, I suppose, makes me part of the vanilla brigade that wants to turn fetishism into the quaint equivalent of the nudie cocktail stirrers I keep in the bar. It's true that there's nothing beyond the pale in Goedde's work (you'll find more nudity in the average issue of Vogue). But to assume that there has to be seems to me a way of making "fetish" a code word for perversion. Goedde doesn't appear to have any guilt about his fascination with the women he photographs, no notion that his taste for women in rubber and leather represents some dark desire.

Goedde's work is almost entirely free of the theatrical element of fetishism. Both in his presentation and in his technique (he shoots in available light and claims not to know how to work a flash), Goedde situates the subjects of his photos in the recognizable world of apartments, alleys, woods, city sidewalks. What's fascinating about the results is that they very subtly erase any disjunction between the role playing of the women and the everyday world of their surroundings. There's nothing "unnatural" or dark going on here. From behind the camera, Goedde expresses the joy that Bettie Page expressed in front of it.

Some of Goedde's most appealing photos are the most playful. A model named Yvette, a brunet cutie with perfectly arched eyebrows, leans over a kitchen sink in a Hollywood apartment, a smile on her face as she slurps water from the faucet. The look is more like that of a little kid being caught drinking out of the milk bottle, except that she's in fishnets and a body-hugging suit. Wearing an outfit that wouldn't be out of place on any career woman, Gina Velour hikes up her skirt to check her corset and garters in a Chicago shop window. Velour also appears in one of Goedde's most voluptuous photos, sprawled along the length of a bed checking out a camera, clad only in a white straw cowboy hat.

The first volume of "The Beauty of Fetish" contains a series, featuring one of Goedde's most frequent models, FetishDiva Midori, that could be an homage to Michelle Pfeiffer's Catwoman or to that character's predecessor, the French actress Musidora as Irma Vep in Louis Feuillade's serial "Les Vampires." Clad in a shiny cat suit, Midori, a regal woman with a jet-black Louise Brooks bob and a trace of the exotic in her features (her parentage is Japanese and Caucasian), poses like a cat ready to strike, or like a leering gargoyle. In the most resplendent of the series, Midori is drawn up to her full height (helped along by her stacked boots) with her arms extended behind her and a look of predatory adoration on her face. Like Catwoman crouched over Gotham, or the great villain of French pulp fiction Fantomas hovering over the Paris skyline, she's underworld royalty, surveying the city she is about to conquer.

Midori takes the camera by natural right and Goedde has too much respect for her innate authority and beauty to reduce her to a dominatrix cliché. He shoots some stunning color shots of her, in blue rubber gown and white fur stole standing on the Golden Gate Bridge, looking as if she'd been plucked from the cover of some forgotten gem of late-night jazz you stumble upon in a used-record store. Turn the page and you find the most affectionate picture of Midori, sitting in her bathroom wrapped in a velvet robe while her long legs, clad in lace-up spiked-heel boots, stretch out in front of her.

As much as any of his pictures, that photo can stand for the melding of nature and artifice in Goedde's work. In his first volume he writes that his parents loved the work of Ansel Adams but that later he discovered and loved Richard Avedon and Diane Arbus. He might not agree, but I'd argue that his own photography shows more of Adams' influence. Dealing with subjects who could be exploited as freaks, Goedde shows none of Avedon's or Arbus' willingness to do the same. (I understand the argument for Avedon's and Arbus' unblinking gaze as an attempt to get over any sense of revulsion or shock. But the effect is always different. The visible sides of the Kodak frames pin the subjects in Avedon like butterflies to a board, and Arbus' work has never escaped a sense of well-bred revulsion, like that of an intellectual slumming at a freak show.)

For an artist who deals with women donning fantasy costumes, Goedde seems determined to present us with the real person. It's a choice left up to the model. Some are content with the persona they've created. Others can't help revealing themselves, like Isabelle Sinclair, whose PVC corset and skirt belie the look of calm expectation on her face. Tuula stares up at the camera with a look of dark vulnerability, as does a model named Kumi. There's a luxuriant relaxation to the shot of adult film star Aria Giovanni lying on a couch in buckled leather panties, her arms under her head spreading out her hair. It's the look of someone who has dropped the porn come-hither pose to relax into being herself.

None of the costumes these women wear have the uncomfortable, constricted look of bondage wear. We're more aware of the way the rubber and leather molds their natural curves, emphasizing the outlines of their body. That's in line with the freedom of Goedde's approach, his constant use of real locations. In a shot taken in Tujunga Canyon, Calif., an Asian model named Margaret examines her hands as if she'd just come across some life form hiding in the scrub brush. Her pose could be precarious -- she's wearing lace-up boots that point her feet straight -- but there's something about the way she stands en pointe that reflects the alertness of her examination, an openness to the surroundings. And where some fetish work makes a fetish of urban and industrial decay, Goedde finds settings that appear comfortably lived in, recognizably nicked and chipped from the wear of life. When you look at a full-length shot of Belle it takes a minute to register that she is lying stretched out on a paint-chipped fire escape, the shot itself taken from directly overhead.

As Goedde notes in "Volume II," his move from Chicago to Los Angeles has resulted in more color shots, a desire to take advantage of the lush colors he sees around him. It has not, however, resulted in any false glossiness. As with his black-and-white work, the color shots are taken in available light, the settings just as recognizable, and Goedde is sensitive to the skin tones of his models' flesh, as in a beautiful shot of a woman named Karen in a red leather corset and fishnets, her satin-gloved hands held above her breasts in an almost demure gesture.

The term "erotica" has come to stand for a certain snobbishness, used as it is to imply something higher than mere pornography. (The subtext always seems to be, if it gives you little shivers, it's erotica. If it's crass enough to give you a hard-on, it's porn.) But I think the word has to be used to describe the work of Steve Diet Goedde, which operates in a world of suggestion rather than explicitness. Goedde has given his models the luster you associate with fashion photography. But he has chosen to describe it as the "beauty" of fetish, rather than the glamour. It's an important distinction. The presentation of the models reflects, as does Goedde's technique and choice of settings, a connection to the real world, a banishment of shame. Bringing private thoughts into public spaces he restores sexual fantasy to everyday life. If it didn't sound so damn therapeutic, I'd call him the healthiest photographer around.