Will Democrats turn Harken into Whitewater?

Rep. John Conyers, D-Mich., has called for an independent investigation of Bush's and Cheney's business dealings. Will other Democrats follow suit? 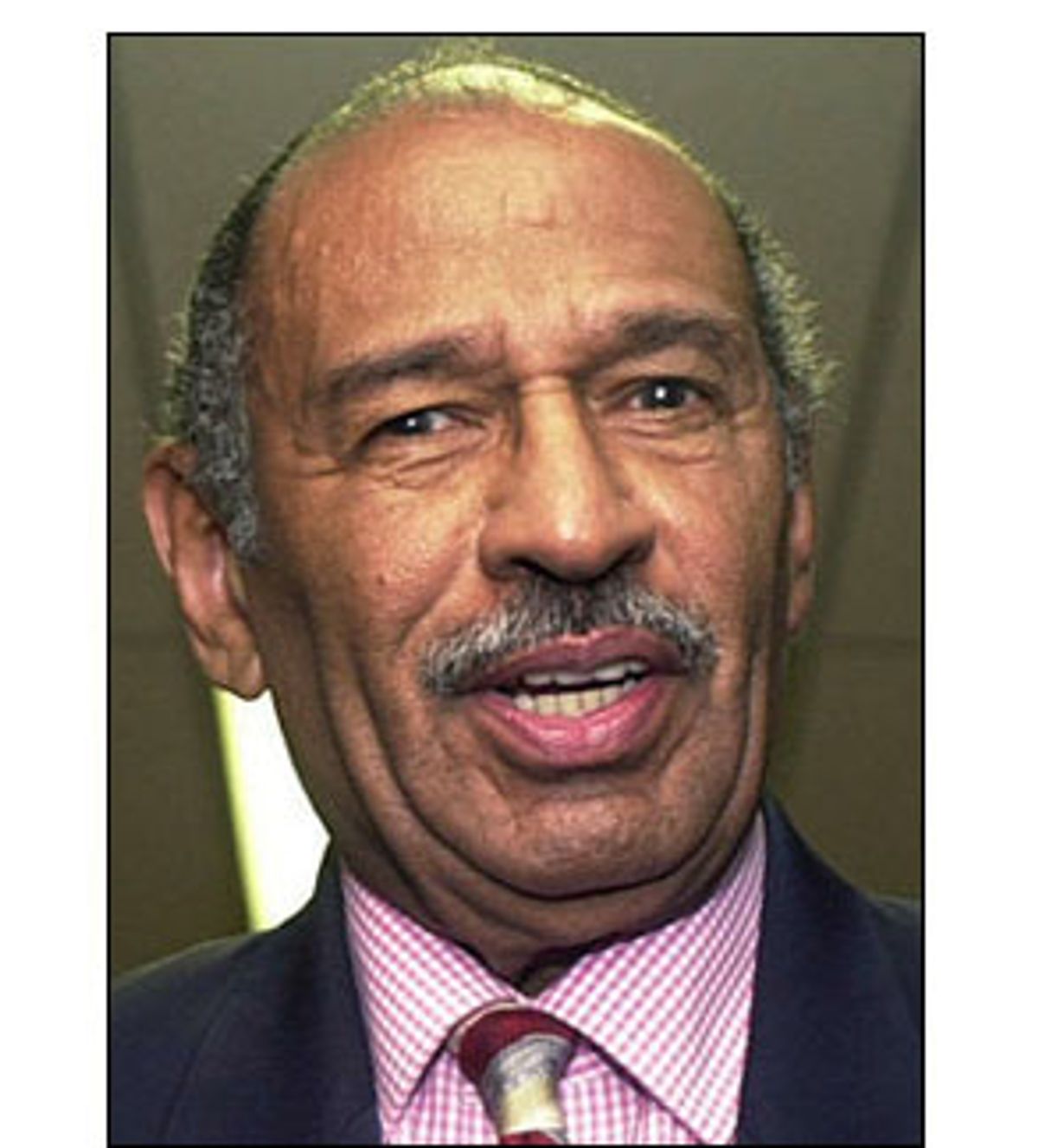 Rep. John Conyers, D-Mich., stepped up the political attack on the Bush administration when, last weekend, he called for an independent investigation into President Bush and Vice President Cheney's business dealings before they came to the White House, a call he reiterated Thursday night on CNN's "Crossfire."

So far, Conyers is standing alone. Democrats have yet to follow the congressman's lead and, in fact, other Democrats have backed away from Conyers' comments, eager to criticize Bush and Cheney's ties to big business, but hesitant to reignite the constant independent investigations that came to define the Clinton years. At least for now.

No other Democrats have echoed Conyers' call for an independent investigator to look into Bush's Harken/Rangers deal, but many seem to be testing the waters to see if the public would embrace such investigations. Democratic National Committee spokesman Bill Buck said the president should allow the Securities and Exchange Commission to release its file from the commission's 1991 investigation of Bush for possible insider trading of Harken stock. "If Bush released his Harken documents and there was nothing there, it would give him a lot more credibility when he talks about corporate crime," Buck said.

But Buck backed away from a call he made in an earlier Salon story, when he said a special prosecutor should take over the SEC's investigation of Cheney. When asked about the SEC's Halliburton probe then, Buck said it was "of serious concern that the SEC, an agency which sits under the vice president, would be called on to investigate. For the sake of investors in Halliburton and confidence in the system, there should no doubt be an independent investigation."

But given the chance to reprise that call this week, Buck demured. His hedging shows just how cautious some Democrats are being as election season officially begins. There is a danger, Democratic strategists say, in becoming too shrill, or making the attacks on the administration too personal.

"Shrill and personal" does not seem to be a concern for Al Gore, who has called for the resignations of SEC Chairman Harvey Pitt and the entire Bush economic team, accused Bush budgeters of "doing essentially the same thing as Enron" by raiding the Social Security Trust Fund, and accusing Bush and Cheney of lying to the American people.

Thursday, in his first return to Capitol Hill since Bush's inauguration, Gore too stopped short of calling for an independent investigation, but called Pitt "a continuing embarrassment to the administration." He also suggested the administration's influence over Pitt could prove damaging. "President Bush announced that the SEC will clear Vice President Cheney," Gore told about 500 members of a Democratic youth group. "I'm sure Mr. Pitt made note of that." But Gore did not go any further, and through his spokesman Jano Cabrera declined to answer further questions.

So has Conyers' trial balloon gone over like a lead zeppelin? A Conyers spokeswoman says her boss was acting on his own when he made the comments. But, she added, Conyers would not be surprised if other Democrats take up the call for a special counsel as the election season gets underway. "I think everyone's been wrapped up in closing the business of the year," said Conyers spokeswoman Dena Graziano, referring to the congressional recess, which begins Saturday.

Conyers himself is certainly not backing away from his comments. "I am not calling for a special prosecutor. I am calling for a special counsel which can be appointed by any secretary or head of SEC, like Mr. Pitt," Conyers said Thursday night. "It would relieve Mr. Pitt from the allegations of all the people he represented in the business world that would likely be coming up under review. It's a good way to get some of the partisanship out of the investigation."

It's hard to imagine Conyers' call as reducing the amount of partisanship. In fact, the White House accused the Democrats of rabid partisanship, sprinting for the moral high ground Bush sought during the 2000 campaign when he promised to "change the tone" in Washington. "Oftentimes, scandal-obsessed D.C. is out of touch with solution-seeking Americans," said White House spokesman Jimmy Orr. "This administration is focused on getting results and rebuilding confidence in our economy."

Democrats must also be wary of a counterattack, which explains the hedging by many on how far to take the Harken and Halliburton issues. "People are probing right now," said one Democratic strategist. "They're sort of waiting to see what's going to stick. And while there are certainly some legitimate questions to be raised, Democrats know all too well what happens when the America people think you're attacking the other side unfairly."

A spokeswoman for the Democratic Congressional Campaign Committee said Cheney and Bush's corporate pasts may be relegated to part of the subtext of Democratic campaigns in 2002, but was unsure whether they would become explicit campaign issues. "They provide developing story lines that serve as strong reminders of a bigger theme," said DCCC spokeswoman Jenny Backus. "While Democrats may not be making a direct linkage [to Halliburton and Harken], it contributes to the white noise that's already out there."

Democrats point to recent polls as proof that the issue has had an impact. A round of surveys released last week shows Bush's vulnerability on the economy. While his personal approval ratings remain high, a CBS/New York Times Poll from July 13-16, for instance, found nearly 60 percent of Americans saying think the economy is worse off than it was when Bill Clinton left office, and nearly half who say the country is on the wrong track. Less than 20 percent of those polled said the president is telling the truth about his old business dealings.

"I think it raises the question of what we always thought about Republicans," said Democratic political consultant Peter Fenn. "We've got the Texaco Twins here in the White House. We've got the boys from big business. I think the question is how much gets personalized to Bush and Cheney, because they're not answering the questions."

Fenn is one of the Democrats who says his party is going too soft on Bush and Cheney, and should make a bigger stink about Halliburton and Harken in the fall. "If this were the Democrats, if this were Al Gore or Joe Lieberman or Bill Clinton, O'Reilly and Hannity and Colmes -- everyone and their friggin' brother -- would be all over them like a blanket," said Fenn. "The Republican leadership in Congress would be calling press conferences every two seconds. But we don't have a Bob Barr."

Conyers may be the closest thing Democrats have to a member with a strong partisan bent and power to match. The other persistent thorn in the administration's side has been Rep. Henry Waxman, D-Calif., ranking member of the House Government Reform Committee, who has made a very public display of deriding Cheney's attempts to keep documents from his energy task force out of the public eye. But on the issue of whether there should be an independent probe into Halliburton or Harken, Waxman has been mum.

"He has not called for anything like an independent investigation yet," said Waxman spokesman Phil Schiliro. When asked if the "yet" was an operative one, Schiliro clarified: "I don't think he'll be doing that any time in the near future."