The not-so-sweet success of organic farming

Pesticide-free, non-genetically modified food is a big, global business now. But, ironically, small farmers are getting the shaft. 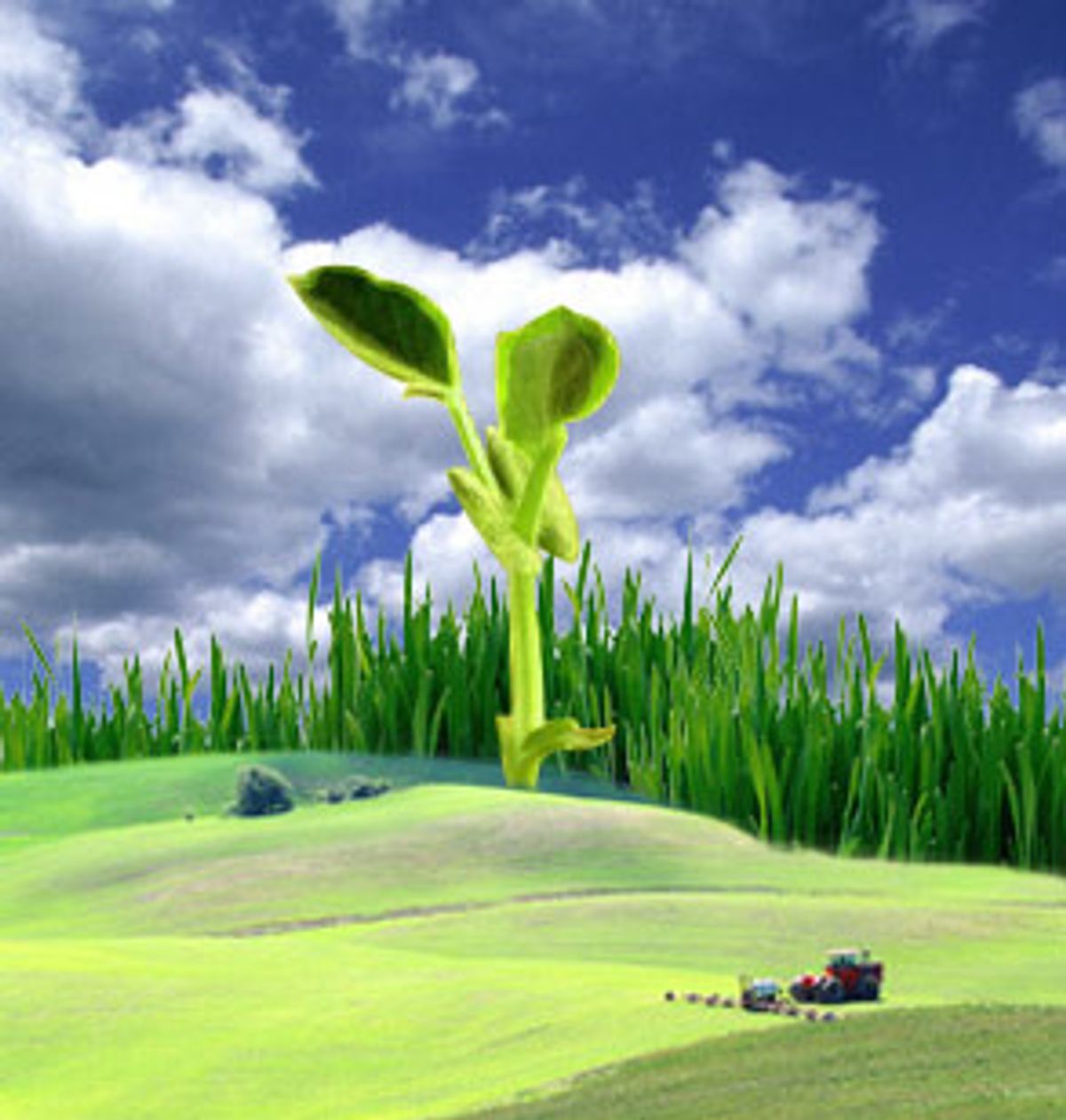 Over the past two months, David Gould has inspected pumpkin farms and fertilizer companies in China, consulted for the world's only organic producer of Noni juice in Tahiti, and followed the trail of non-genetically modified livestock feed -- from farmers' auctions to port machinery -- in India.

Gould is a Portland, Ore.-based inspector and certifier of organic foods. For an eco-minded scientist-activist, Gould appears to have an ideal job: he gets to travel to far-flung places, work outside and help Third World countries implement environmentally friendly development strategies. Theoretically, he's a standard bearer for a new, more sustainable form of global food production, in which local communities produce food that is consumed locally, without the input of expensive and possibly unhealthy pesticides or genetically modified organisms.

But organic farming in the 21st century is turning out to be a little more complicated than its advocates originally expected. For example, there was the time a few years ago that Gould was sent by Eco-Cert, a German certification agency, to oversee the company's first certification project in Japan.

"I was inspecting a Japanese food processor who was importing soybeans from China to process into goods for export to Europe," said Gould. "I said to Eco-Cert: 'We're circling the globe with organic. Isn't this a little bizarre, a little ... unsustainable?'"

If anyone's living out the ironies of the post-utopian world of organic agriculture, it's Gould. An independent contractor and consultant who works for public and private certifying agencies, Gould buys many of his own groceries from local non-certified family farms. He refers to himself as simultaneously living both on the "ideal extreme" of the organic spectrum and as an "agent of the USDA." As such, Gould embodies the conflicted attitude many greener growers, processors and certifiers are taking toward the increasingly industrialized field of organic farming.

Once the lowly stepchild of conventional farming, organic is poised for a family takeover. In 2001, global sales of organic foods reached $26 billion; by 2008, that figure is expected to reach $80 billion. Leading the push toward organic is the European Union, where Belgium, the Netherlands and Wales have set government goals to make 10 percent of all arable land organic by the year 2010. (In Germany, that figure is 20 percent).

The U.S., which has set no such goals, has almost doubled its acres of organic farmland since 1997. And on Oct. 21, 2002, the United States Department of Agriculture (USDA) will implement the nation's first federal labeling standards for organically grown and processed foods. The new USDA seal will apply to U.S. growers who, for the most part, produce food without the use of genetic engineering, growth hormones or pesticides.

But dig a little deeper into this world where more crops are being rotated and fewer poisons are being used, and the contradictions begin to sprout. As Gould points out, there's something, well, ironic about using massive amounts of non-renewable energy to ship organically grown food -- not to mention the inspectors themselves -- halfway around the planet. That most organically grown food is packaged and processed -- "until it's a stretch to call it food, much less organic," he says -- further undercuts much vaunted organic claims to benefit human health and the environment. And then there's the nasty little problem that the very act of certification itself puts constraints on small farmers who want to push organic farming even further ahead.

The original vision of organic farming as ecologically sustainable agriculture practiced by small farmers is giving way to big business. Organic's success is sowing the seeds of its own co-optation.

"Certification used to favor the small farmer," says Gould, who holds a life sciences degree from the Massachusetts Institute of Technology and claims a lifelong interest in the ways communities form around food supplies. Now, he contends, the mass market is rewriting the grass-roots story, turning organically grown food into a global brand (the National Organic Program, notes Gould, is part of the USDA's Agricultural Marketing Service) rather than a social, economic and ecological alternative to conventional farming.

"Organic is becoming one tool that people interested in sustainable production can use," he says. "But you don't have to be sustainable to use organic as a label." The real future of sustainability, he says, hinges on local production and support of local economies. "'Know your farmer,'" says Gould. "That was one of the keys of the organic mission that has been lost."

Twenty years ago, inspectors and certifiers of organic foods were part of a regional, insular profession characterized by a powerful streak of political activism and ethical conviction. Developed in 1982, the organic standards issued by Oregon Tilth, one of the country's original certifying organizations, were a simple, one page description of farm production practices that would galvanize the earth

Today, the National Organic Rule is a bureaucratic product, a 63-page list of allowed and prohibited substances, land management practices, livestock standards, and labeling requirements for processed foods. (Destined to confuse even the most vigilant of consumers, product labels will read either "100 percent Organic," "Organic," for products that are 95 percent organic, or "Made with Organic," for products that are less than 95 percent organic).

As for Gould's job, it's become a combination of the exotic, the ecological and the administrative. He harvests allspice with the natives in the Guatemalan jungle, is feted by village elders in Mongolia (inspections of mungbean crops), and slogs through the massive amounts of paperwork involved in creating and maintaining macro-policies for food production and handling. There are now 56 countries that have implemented or initiated the drafting of organic regulations, each with its own spin on what it means to be organic. Gould's recent inspection of a fertilizer company in Northeastern China, for example, involved verifying that the manure came from non-factory farm chickens -- a European regulation that U.S. standards don't mention.

Gould's position in the global economy, working mostly for U.S. or European clients who want to import certified organic products from the developing world, embodies one of the central conundrums for the organic movement: How does an eco-friendly, community-based food movement reconcile the environmental costs of transporting massive amounts of food around the world? The fact that the global organic economy is reproducing neocolonial structures is, as it were, another pest in the corn. Currently, cheaper production costs mean that the bulk of organic production in developing countries is exported to Europe or the U.S. Imposed by the West, certification standards and processes often have little to do with the preservation of local practices -- another irony, Gould observes, since many traditional cultures had been farming organically for thousands of years until multinational corporations encroached upon them with agrochemicals and, now, GMOs.

"The key challenge facing developing countries," says Gould, "is building local awareness and domestic markets." Giving small farmers "value added" opportunities, says Gould, are ways he tries to grow the local along with the global -- in his case, helping small producers in China grow organic green tea and medicinal herbs, or their Tahitian counterparts market organic mango and star fruit to the foreign owned luxury hotels lining the lagoons. "But no one's figured out a way to make the global economy sustainable," he says, noting he avoids buying grown fruits and vegetables that had to be flown in from the Southern Hemisphere.

To unpack Gould's arguments about the disintegration of the organic ideal, go back ten or fifteen years, when organic farmers in the U.S. pushed for national organic standards to clarify the label, win recognition for organic as a viable, even superior kind of farming and gain access to land grant and extension office money and research funds. "Well, we got what we asked for," says Gould. Today, he says, the problem turns on the twin specters of government standardization and corporate consolidation.

"One of the grossest problems is the food distribution system is totally screwed up," says Gould. "If you want to supply the big supermarket, you have to have a lot of product." Coopted by big business, he says, the organic movement has shifted away from the small farmer -- and its corresponding focus on community food production -- toward the techniques and problems of conventional and factory farming: "Big companies like General Mills tend to process huge amounts of food, which results in huge demand for food," he says. "This puts small farmers at a disadvantage and results in the ecologically indefensible practice of monoculture... because you need to feed this machinery at an insane rate."

Further derailing the organic mission, says Gould, are the increasing costs of certification, which disproportionately harm small growers, and the inherent conflict of interest that occurs in a system where certifiers are paid by the companies they certify. "It opens the door for certifiers to grant exceptions to standards, make things conditions for improvement, when really they should have stopped things in their tracks," he said.

Government subsidy of organic farming, he says would alleviate both of these problems. Gould also singles out a provision of the new USDA rule that prevents farmers who want to use the organic label from certifying to a more stringent standard than the federal government requires. This kind of unwavering standard, he says, favors corporate producers who can dominate the marketplace by buying and selling organic products cheaply and en masse. Prohibited from advertising higher ecological performance, smaller "best practice" farmers will be locked out of the competition. "It's unconscionable," he says. "It's a power play by the government."

For Josh Volk, field manager for Sauvie Island Organics, a seven acre farm outside of Portland that sells its products directly to 200 Community Supported Agriculture (CSA) members (individual households that own a piece of the farms production), the key to survival, of both the farm and the mission, is clear: don't get certified.

"When you're making less than minimum wage for long weeks it's difficult to justify spending the money on an organic label that will probably not make any difference in sales," he says. After the USDA law takes effect, the non certified SIA won't be able to label its produce organic or even say they use organic practices. "But since we have direct contact with our customers every day," says Volk, "we can explain to people that we do not use synthetics and that we try to farm as sustainably as possible."

So here's the final paradox. Mass production and government standards mean more organic production and consumption, which means fewer chemical pesticides, herbicides and fertilizers are going into the air, soil, water, and, of course, our bodies. But just as U.S. regulations for certified organic foods are about to be put into place, the label "organic" may become obsolete -- or, at the very least, lose its cachet. This is why Gould, who grinds his own flour, sprouts his own sprouts and buys chicken from a non-certified Portland-area farmer, says the future of sustainability depends on linking producers and consumers via regional production and networks of farmers' markets, food coops, and CSAs.

"The story in this country is that wealth concentrates," he says. "That's unstable. We need smaller operations, local processors, more evenly spread out capitalism."

As for his own role in the system, it's telling that Gould -- the globetrotting inspector par excellence -- is now contemplating a career change. "I see my job as evolving toward more local work," he says. "And if that means getting out of the certification business, so be it."

Linda Baker is a journalist in Portland, Oregon.