In Salon's latest CD roundup, the Counting Crows get Petty, the Flaming Lips reinvent and Marianne Faithfull shacks up with younger men -- again. 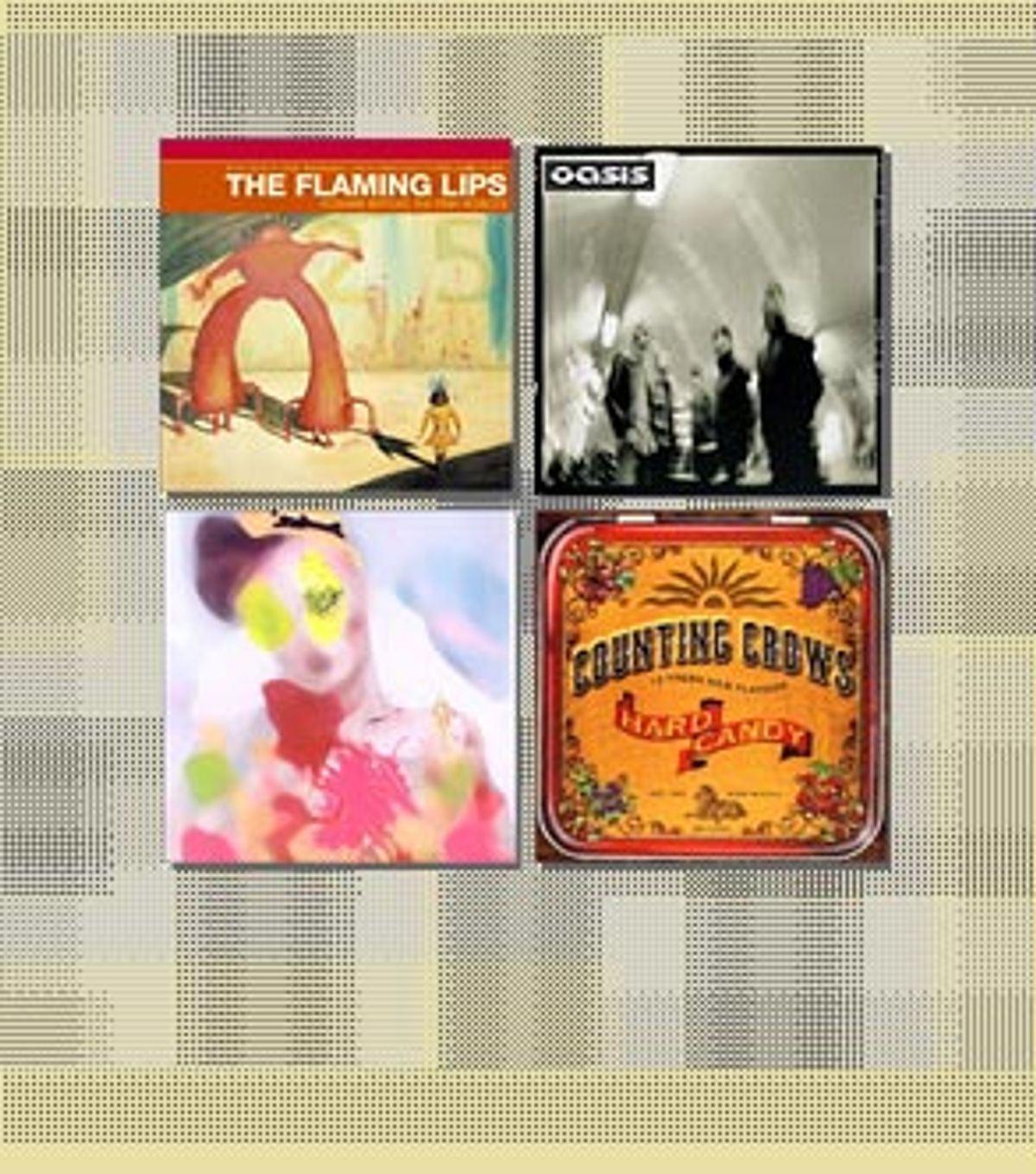 We live in the Age of Ersatz, and despite our protestations, we regularly indulge in its ubiquitous and undeniable charms. I'm sipping on a Starbucks grande latte as I write this, purchased at the simulacrum of a mom-and-pop boho coffee shop on the corner when I could have walked half a block further and supported the real thing. Such is life -- sometimes the easy way wins out.

There is no heavy lifting and zero authenticity in the new offerings from the Counting Crows and Oasis, but they have their winning moments nonetheless. As entire albums -- works that we will return to again and again to revel in their collected charms -- both fall flat. But neither can be written off completely, as each offers moments of simple, fleeting pleasure.

Well aware that poppy roots-rock is hardly the flavor of the moment on modern-rock radio (witness the sad obsolescence of the Wallflowers), the Counting Crows are determined to be noticed on "Hard Candy," compromising their earlier principled stands (no lip-syncing; no "selling out," man) by appearing in a Coca-Cola commercial and avoiding some of the more ambitious, Van Morrison-style experiments of the last few discs in an all-out effort to craft concise, catchy Tom Petty-ish singles full of chiming guitars and anthemic choruses.

At this they succeed: "Miami" and "American Girls" (even the name screams Petty) may be the best tunes they've ever wrought. When they pop up on the car radio as I'm hopping from button to button, I will not change the channel; sprinkled in amid the Dave Matthews and the Nickelback, the Counting Crows tunes seem like a joyful revelation. But that doesn't mean I want to endure Adam Durwitz's shallow, solipsistic whining about his romantic woes ("I can never get enough of love") at any length greater than three and a half minutes at a time, no matter how sweet the manufactured musical backings.

With the subtlest of variations, the brothers Gallagher have now made the same album five times, but auteur Noel keeps coming up with enough minor twists on that wonderfully dreamy psychedelic buzz to make for pleasant listening, even if Oasis have never come close to approaching the creativity of fellow Brit-poppers Blur, Pulp or even the relatively obscure Boo Radleys. Advance buzz on "Heathen Chemistry" -- which is produced by the band and mixed by Mark Spike Stent (U2, Madonna, Björk) -- claimed that the group was turning toward alternative country. But aside from a few twangy acoustic guitars added to the psychedelic drone behind Liam's standard warbling about how he gets "so high I just can't feel it," there's little noticeable difference in the formula.

When exposed to individual tunes such as "The Hindu Times" and the now-expected Liam and Noel solo turns ("Songbird" and "Force of Nature," respectively), I don't mind a bit: Oasis may be spending an entire career rewriting three or four key songs on the Beatles' "Revolver," but "Revolver" is still, after all, one of the best rock albums ever made.

Of course, with both Oasis and the Counting Crows the question remains: Why listen to "Hard Candy" or "Heathen Chemistry" when you could turn instead to Tom Petty and the Heartbreakers' "Greatest Hits" or "Revolver" itself?

Maybe we're just too lazy to walk that extra half a block.

Talk about difficult follow-ups. The Flaming Lips' 1999 release "The Soft Bulletin" inspired a collective critical spasm comparable only to the thesaurus-driven backflips caused by the latest Wilco album. For the Lips, it represented a third (fourth?) bout with overnight success in an almost 20-year career.

It turns out that "Yoshimi Battles the Pink Robots" is an album as utterly out of sorts with the Flaming Lips' history as "The Soft Bulletin" was with the albums that preceded it. In fact, reconciling the sound on "Yoshimi" with the sound of any Flaming Lips album is nearly impossible. (Even Wayne Coyne's vocal warblings -- long an identifiable mark of the Lips' music -- are nearly unrecognizable here.) Though it shares some of "The Soft Bulletin's" lush airiness, "Yoshimi" exists in an entirely different space.

There is not one rock song here, nor the themes that have been strewn across the Lips' 11 or so full-length records. No songs about bugs. No songs about Jesus. No ear-splitting youthful distortion. In fact, precious few of the hooks that made the dense beauty of "The Soft Bulletin" so accessible are present. "Yoshimi" is the sound of pop effluvia. The leftovers. The sounds that are stuck in the rear surround-sound speakers; the left channel Mellotron in a Beatles outtake; the bass line you hear in the shower; the drum machine sound that Sly Stone used on "Fresh." Leftovers. Imagine an entire album of that, but dressed with irresistible melodies and an inescapable, undefined poppiness.

Even the single "Do You Realize?" is utterly insubstantial, never taking the properly full-bodied form that a pop song is supposed to take. Yet it, like the rest of "Yoshimi," is completely engaged and, well, complete. A song like "Yoshimi Battles the Pink Robots Pt. 2" sounds like a band covering the French duo Air rockin' out in outer space, while "Are You a Hypnotist?" is founded upon what sounds like a warped church organ record. In other words there are few points of reference here, other than the fact that what you hear sounds right, but not correct.

As rock 'n' roll wears itself out, "Yoshimi Battles the Pink Robots" is the sound of valiant ragpickers threading the scraps together with wispy pop glue, handing up a gentle thing of vaguely identifiable pieces and parts; something simultaneously familiar and foreign, both beautiful and completely odd. Suffering neither from irony nor from overwrought context, "Yoshimi" is a record that can -- and must -- live outside of its time and place.

Let's face it: A lot of guys have a long-standing obsession about the experienced older woman, and sexy though they were, neither Mrs. Robinson (Anne Bancroft or Kathleen Turner) had anything on Marianne Faithfull. Yeah, sure, of course -- she is an unassailably cool embodiment of rock history, a living link to the Swinging London of the mid-'60s ("As Tears Go By"!), the hedonistic decadence of the early '70s ("Sister Morphine"!) and the energizing, angry punk from later in that decade ("Broken English"!). And unlike the Rolling Stones, she's done very little in subsequent years to dishonor that proud legacy.

Still, I suspect that the reasons some of the leading talents of Generation X were so ready, willing and eager to assist on Faithfull's newest is that they were anxious to ask her about that legendary Mars bar; they just couldn't say no when she called, and they all had a bit of a crush. The strongest contributions on this, her best album since 1981's "Dangerous Acquaintances," come courtesy of Beck and former Smashing Pumpkin Billy Corgan (who guest on and co-write three and two of the 10 tracks, respectively), and Jarvis Cocker of Pulp and Damon Albarn of Blur, who both indulge their long-standing fascinations with Mod London by giving its most famed femme fatale one potent track each.

Going back to the Stones, one of Faithfull's biggest talents has been the ability to choose appropriate collaborators, and to seduce/inspire them into giving her their very best. But placing too much emphasis on the hired help shortchanges her biggest assets: her distinctive rasp (the sound of a dozen cigarettes inhaled before breakfast) and the piercing wit of those literary, licentious lyrics. The opening "Sex With Strangers" (one of the Beck tracks) is a delightfully creepy electronic homage to some very unsafe sexual activities; "Song for Nico" is a touching homage to another infamously drug-plagued '60s sex goddess who didn't have the survival gene that Faithfull seems blessed with, and "Sliding Through Life on Charm" is the sort of sassy and erudite confessional that Ray Davies gave up writing a decade and a half ago, as well as an honest and open-eyed confession about her modus operandi.

When David Bowie snares the likes of Dave Grohl and Moby to help boost his hipster cred, it plays like the shallow posing that it is. It's testament to the strength of Faithfull's considerable charisma and endearing croak that she's never overshadowed by the male musicians in her life. They simply prostrate themselves at her feet and do the dominating diva's bidding, and all of us reap the rewards.