The case for Raymond Chandler

The creator of Philip Marlowe has been called an imitator and a hack, but he deserves his lonely, disillusioned corner in the American literary canon. 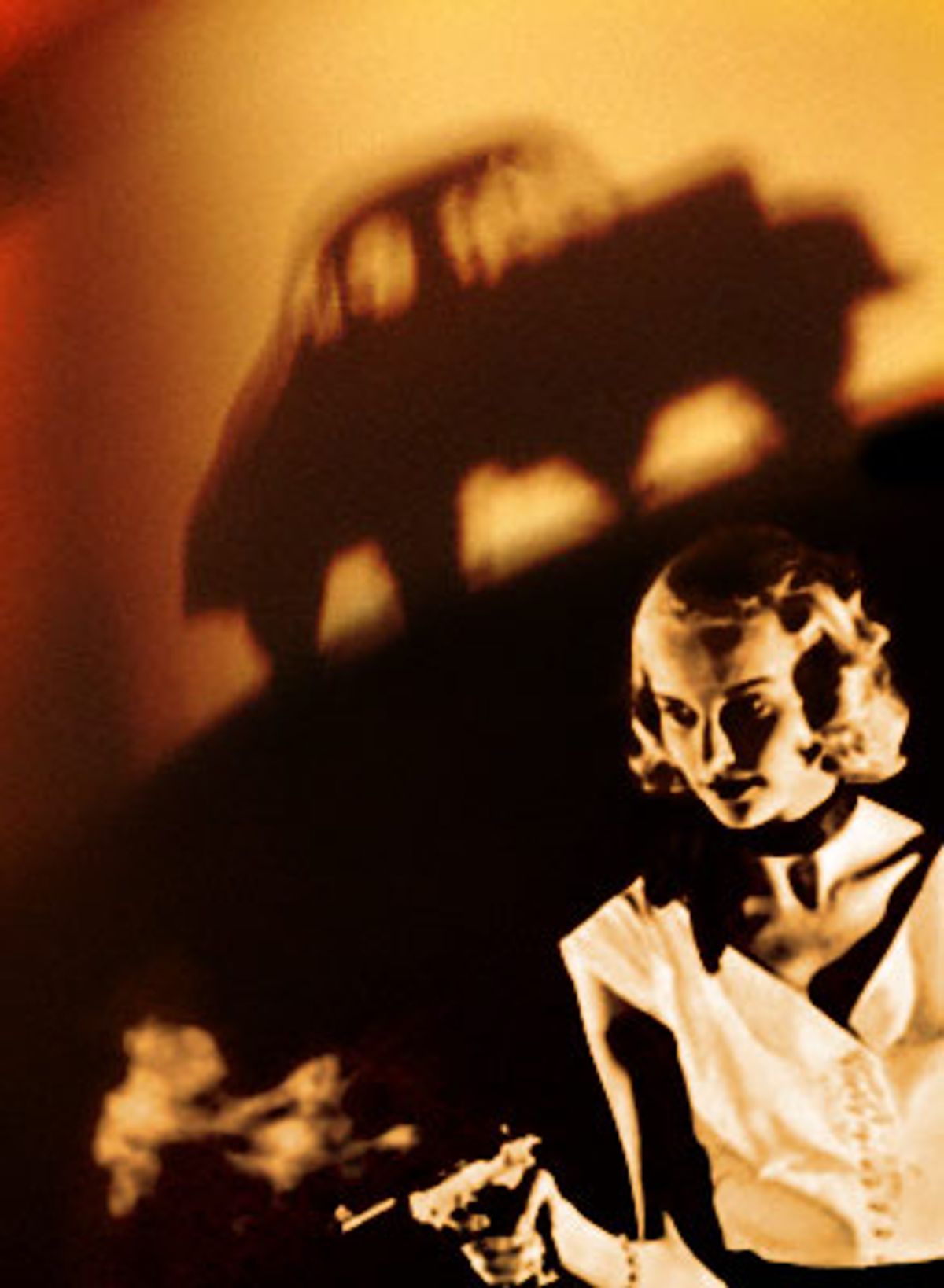 A few years ago, passing through Santa Monica on the way to L.A. International, I found myself gazing at the pseudo-Mexican, stucco-ed architecture and wondering why an area I had never been anywhere near before seemed so familiar. Then I saw, for the first time, the Pacific pier where Philip Marlowe caught the water taxi to the Montecito gambling boat in "Farewell, My Lovely" and realized the source of my dij` vu: I had seen it all before through the eyes of Raymond Chandler. To paraphrase Burt Lancaster in "Atlantic City," the Pacific Ocean was really something back then.

Probably no writer has evoked urban Southern California for more readers than Raymond Chandler, which is ironic, because Chandler hated L.A. at the same time he was providing us with an enduring object of nostalgia. As the cover art of the new Vintage reissues of Chandler's nine published books proves, nostalgia is a large part of Chandler's appeal. In the city that constantly renews itself without ever changing, Chandler created an astonishingly adaptable genre that continues to evolve.

Thinly disguised variants of Chandler's Philip Marlowe, almost all of them denizens of Los Angeles, are resurrected every few years to revise the past (Jack Nicholson's seedy post-Depression hustler in "Chinatown"), mirror the present (James Garner's sly, laid-back, me-decade private dick in TV's "The Rockford Files") and even anticipate the future (Harrison Ford's burnt-out replicant hunter in "Blade Runner"). Steve Martin parodied Chandler in "Dead Men Don't Wear Plaid" and Dennis Potter paid homage to him in "The Singing Detective." He has even influenced the stage musical; without Raymond Chandler, there would have been no "City of Angels." (And how in the world did Chandler ever miss using that title?)

Has any writer with such a small oeuvre influenced American culture more than Raymond Chandler? His first-rate work consists of a few novels -- "The Big Sleep," "Farewell, My Lovely," "The Long Goodbye" -- film scripts for Billy Wilder's "Double Indemnity" and Hitchcock's "Strangers on A Train," and perhaps a few stories and an essay. And yet, for millions of people around the world, many of whom don't read other mystery stories, he defined a genre (the American "hardboiled" detective story), a city (pre- and post-war Los Angeles), and a style (film noir).

Billy Wilder once said that the Hollywood personalities he was asked about most frequently were Marilyn Monroe and Raymond Chandler. Of the two, Chandler -- a publicity-shy former accountant who went to school in England, lived with his mother 'til he was 25 and began writing in middle age -- is certainly the more unlikely candidate for enduring interest. Nonetheless, his influence pervades American culture to an extent that may puzzle a younger generation unfamiliar with his work. As Wilfred Sheed noted, Chandler has suffered the opposite fate of fellow Dulwich school alumnus P.G. Wodehouse: "Where Wodehouse outlived the competition, the competition only came to life after Chandler, so that he seems more of a hack in retrospect than he was at the time."

Sheed's point is valid except for the "hack" part; the man who wrote seven novels (all reprinted in the Vintage edition) over a quarter-century may not have been Flaubert, but he wasn't Erle Stanley Gardner, either. In fact, it would have cheered Chandler to find that in death he has escaped the mystery and crime sections altogether and has been moved over to "literature" between Camus (who sought, in "The Stranger," to emulate the spare, pungent American prose style made popular by Chandler) and Chekhov.

If Chandler, then, fits uneasily into the genre category, then what is his place in American literature? Or does he have one? The answer to that question is no simpler now than it was half a century ago, when W.H. Auden and Graham Greene were praising him for rising above his contemporaries while Edmund Wilson was dissing him for failing to do just that. The question has been asked about whether or not Chandler rose above his own predecessors. If rereading Chandler and Dashiell Hammett (the man whose style Chandler is often said to have appropriated) proves nothing else, it proves Chandler was original.

For instance, while rereading the two most celebrated American private eye novels, Chandler's "The Big Sleep" and Hammett's "The Maltese Falcon" back-to-back, I was surprised to find Sam Spade and Philip Marlowe, who had melded in my memory (probably because Bogart played them in film adaptations of both books), really had very little in common. Spade was much closer to the type of bullying, sadistic mercenary Marlowe generally comes up against. (Hammett used Spade in just one novel and four stories; I don't think he liked him very much.)

The main reason Chandler is still seen by many as a sequel to Hammett is not because their books are all that similar; what Hammett fathered was not the American detective story but the American crime novel that evolved into the works of Elmore Leonard and James Ellroy. The main reason their names are linked is because, in his oft-quoted essay "The Simple Art of Murder" (also reprinted in the Vintage editions), Chandler trashed the traditional Agatha Christie-Edgar Wallace school of "The Butler Did It" mysteries while crediting Hammett with "giving murder back to the kind of people that commit it for reasons, not just to provide a corpse."

This was an odd point for Chandler to make, considering the unnecessarily complicated mystery plots he concocted. In Hammett's best-known novel, "The Maltese Falcon," there is almost no mystery to be solved and the plot is driven by the characters' unquenchable greed. In his most praised book, "Red Harvest," there is no mystery at all. But trying to decipher Chandler's plots can be like trying to interpret "Finnegans Wake." I have now read "The Big Sleep" three times, and I'm no closer to figuring out who killed who than I was before I started. I'm finally convinced that it's not really important.

What matters is not how Chandler was similar to Hammett, or, more important, to the now-forgotten hacks of the 1930s pulps, but how he was different. His prose, for instance -- the tight, swift rhythm and sentences that careen toward the end of paragraphs with a closer that stings like a slap in the face. Hacks don't write with Chandler's kind of precision. That's why they are hacks. Chandler's prose was the perfect vehicle for the suspense story that he more than anyone else perfected if not actually invented -- the kind driven more by atmosphere and the baser side of human nature than by plot.

Which is why, in the end, most of Chandler's critics tend to be either wrong or irrelevant. About 10 years ago, Martin Amis, in the New York Times, wittily dismissed Chandler as dated, and on a superficial level he was probably right. But if that really mattered, why would Chandler continue to be read more than 60 years after his first book? We shall see if Mr. Amis dates so well in a fraction of that time. (One might note that the memory of Amis' own 1997 attempt at a mystery, "Night Train," didn't survive the year it was written.) Chandler's finest biographer, Tom Hiney, put it best: "Since the 1940s, so many crime writers have emulated Chandler's style that Marlowe has been something of a clichi outside of his original stories. Within them, he has lost almost nothing at all."

In his famous put-down of detective stories, "Who Cares Who Killed Roger Ackroyd?" Edmund Wilson wrote that a Chandler novel "is not simply a question of a puzzle which has been put together but of a malaise conveyed to the reader, the horror of a hidden conspiracy that is continually turning up in the most varied and unlikely forms." That was praise. His criticism was that "the explanations of the mysteries, when it comes, fails to justify the excitement produced by the elaborate build-up of picturesque and sinister language."

That's true. Chandler never understood that the intrigue aroused by a good mystery wasn't something that could be explained by a glib private dick's wrap-up monologue. That's a large part of the reason Chandler never really transcended the detective game. (Though, in fact, the only private-eye story ever able to beat that rap was "Chinatown," and as the sequel proved, that was a one-time deal.) With Chandler, it's not the solution of the murder that stays with us, but the angst produced by its seeming insolvability. ("The atmosphere in Chandler's and Hammett's stories," Borges once sniffed, "is disagreeable.")

The constant republication of Chandler's works -- the upcoming Random House "Omnibus" comes just seven years after a well-received Library of America two-volume set -- assures that Chandler, for at least a while longer, will continue to take his place on bookshelves with other quintessentially American writers such as Henry James and Edith Wharton. He is read and will continue to be read, even by readers who are smart enough to see through the tough-guy sentimentality and bargain-basement existentialism. Maybe especially by those readers. Chandler's books were more complex than the ideas they were supposed to be about, and the fears they give rise to are more troubling than the private-eye genre could contain. For that reason he will always be the favorite mystery writer of people who hate mystery novels but love mystery.