Dykes on bikes with mikes

Lynn Breedlove takes us to her manic world of speed freaks, strippers and queer-core punk rock. 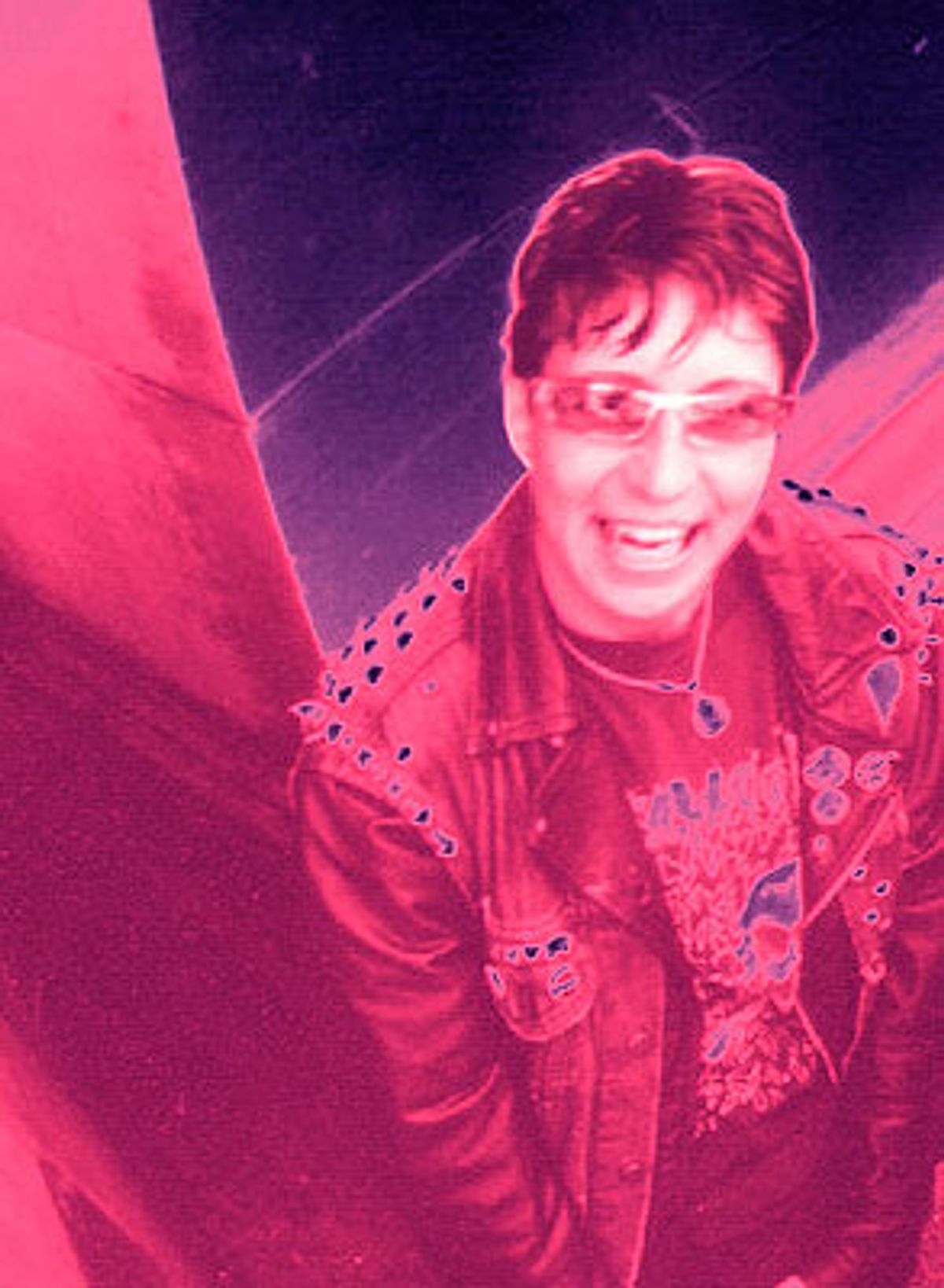 Lynn Breedlove, just-published novelist, former bike messenger and frontwoman for Tribe 8, the all-dyke hardcore band, walks into Jack's Bar and heads for the bathroom, a place where she once could be found shooting speed.

She stares at the toilet and a cracked mirror. "Looks like someone else got here first," she says and takes a running swing at the mirror. "Pow!"

Her boyfriend skills are so finally tuned, says Breedlove, that she is toying with the idea of opening Uncle Lynn's School for Boys, an etiquette school for butches. Relationship rules will include: "Talk about your feelings. Don't go off. Don't cheat. Don't lie. Don't start more than 50 percent of your sentences with the word 'I.'"

Though less mean and very sober, Lynn Breedlove still looks more or less like the kid on the cover of her novel, "Godspeed," with maybe a decade or two of seniority. That kid has a blue mohawk, a neck tattoo, the word "F-U-C-K" tattooed on his knuckles, and he's sitting on a Dumpster with a paper-bagged 40 oz. brew in his hand and a bike at his feet. Breedlove still has the bike and the blue hair, along with a few tattoos, but she no longer snacks on malt liquor. The kid, who appears in photographs throughout the book, is actually a former roadie for Breedlove's band, a perfectly apt alter ego for Jim, Breedlove's speed-freak, stripper-dating punk-rock dyke heroine, who is something of an alter ego for Breedlove herself.

"Godspeed" is not an autobiography, though Breedlove does call it a roman à clef. Jim, a punk dyke bike messenger, is addicted in equal parts to her stripper girlfriend, Ally Cat, her bike and speed, though the three competing habits have a tendency to cancel one another out. Breedlove also was once a speed freak, a dater of strippers and a bike messenger. (She founded Lickety Split Couriers, an all-girl bike messenging service, in 1991.) And she went on the road with Tribe 8 throughout the United States and Europe, as well as touring with Sister Spit, a lesbian spoken-word performance-art collective.

The fictional Jim navigates real San Francisco landmarks -- shoots speed at Jack's, goes to gigs down the street at the Firehouse (now the Kilowatt), agrees to watch her lesbian friend turn a trick as a "boy" on Polk Street for 20 bucks. Jim also is a member of Hags SF, along with her friends Smash, Pez, Frankie and Fuckalot, whose credo Breedlove describes early on: "Hags are us, crazy rocker pervert hellions outside even dyke society, banished by lesbians to the pit where we mosh after ingesting copious amounts of stimulants on the bathroom counter in front of regular dykes applying lipstick and otherwise grooming themselves. Hags have special anti-grooming rituals, like streaking hair with blue paint. We don't de-escalate. We're not afraid of blood."

There is plenty of blood throughout the novel, mostly dispensed through a chaotic campaign of vigilante justice: A homophobe who tries to pick up Jim's girl outside the strip joint ends up with Ally's spike heel to his groin; a man beating his girlfriend on the street gets a Kryptonite bike lock to the head; another guy who is abusing his girlfriend and molesting her daughter ends up drunk, beaten and possibly raped by a team of angry dykes.

Ally loves Jim's badass self, but is not so cool with the speed thing, especially because Jim chronically hits her up for cash. Jim, who calls herself "the President of the He-Man Woman-Haters Club," reacts with very typical boy bravado: "She don't love me no more," laments Jim. "If she did, it would be forever and no matter what, but it's always if I don't steal her money and if I don't go out and get high, and if she doesn't catch me runnin' with no other hoes. That's ... what is it ... conditional love, isn't it."

And though speed and a general indifference to pain are good qualities in a bike messenger, Jim's employers are less impressed with her tendency to disappear for days at a time. Girlless and bikeless, Jim decides to roadie for Hostile Mucous, an all-dyke hardcore band. After several months on the road, she lands in New York, works as a cabbie, falls half in love with a drag queen and finally gets clean.

"Godspeed" is so manic that the experience of reading it is almost enough to give you a contact high. Some reviewers have said as much, says Breedlove, but those were probably the ones who "read 60 pages and the flap copy." The first half of the novel, when Jim is on speed, "does drive you insane," she admits. "The rhythm of the sentences is really fast, there are lots of run-ons, lots of commas, gotta get something -- drugs, Ally -- but when he stops the speed, the rhythm changes."

Breedlove has been drug- and alcohol-free since 1990. On her Web site, she writes (in the third person): "She had her last drink and her last hit of crack at four AM New Year's Day on Castro Street, as she slid down a wet street sideways on a moped, yelling 'yippee no brakes.'"

Once she gave up the chemicals, Breedlove found herself in need of a new rush. So she started the band. Three years later, she started the book while she was taking writing classes from Kathy Acker that were held in the Edinburgh Castle, an Irish pub in San Francisco. She wrote "Godspeed" over the course of nine years, and finally finished it during the Sister Spit tour, writing in a van, nicknamed Sheila, between gigs. "I was looking for a catharsis," she says, adding that she was still in love with the idea of drugs at the time. "I still glamorized it, I still missed it. Even though I knew it would kill me."

Besides writing, Breedlove's prescription for getting off chemical speed involved lots of mechanical velocity. "I like speed," she says. "White-water rafting, vehicles, bikes, anything with wheels." Also, she jumps out of airplanes. ("I made a deal with myself that if I quit drugs, I would definitely jump out of an airplane. And I do.")

Now that she has her book, the band and a "Godspeed" screenplay in the works (Breedlove is writing it herself, and her band mate filmmaker Silas "Flipper" Howard, who made "By Hook or by Crook," has decided it will be her next project), Breedlove is racing most of the time. But, having disbanded Lickey Split Couriers to have time for writing, she still needs a gig to pay the rent. ("No one pays butches for sex," she muses. "Women don't have the money that gay boys do.") So Breedlove has turned to child care for steady income. Right now, she works as a professional "gayby sitter," taking care of the infants and toddlers of gay parents.

She's also teaching at the Harvey Milk Institute, a San Francisco institution of learning run by, and for, queers (their choice of word), and she does guest lectures on writing, music and queer culture at many other college campuses. Very little passes for radical in San Francisco, "but in the rest of America," says Breedlove, "if you're out to shock people with your queerness, it's pretty easy to do." For example, she describes a time when she was asked to speak at a gender studies class at the Rhode Island School of Design, and she started talking about a couple made up of a male to female transsexual and a female to male. "They got married," she said, "and then the boy got pregnant! The professor's jaw," says Breedlove, "just hit the floor."

At a recent gig in San Francisco, on the bill with Pansy Division, the gay boy complement to Tribe 8 in the San Francisco-based queer-core music scene, Breedlove wears a T-shirt and shorts, boots and a black leather jacket scrawled with "Shoot rapists not dope." She kick-starts her set by taking a big swig of Crystal Geiser and spitting it on the audience.

"C'mon," she says, "how am I gonna stage-dive with this big void in front of the stage?" For the second song, she invites a baby butch named Mike onstage, pulls a Bowie knife out of her boot and brandishes it while Mike dutifully cowers at her feet. By the third song, she is playing shirtless. She pulls up the waistband of her boxers.

This kind of thing has made Lynn Breedlove a poster dyke for reckless butches with big ideas. In fact, she stars in a recent postcard campaign sponsored by the Seattle Safe Schools project, an organization for Gay, Lesbian, Bisexual and Transsexual youth. The organization printed a stack of hip-looking brown and orange cards, each stamped with the image of a contrarian queer: There is a gay football captain ("Not all fags take ballet"), comic diva Sandra Bernhardt ("Not all dykes wear mullets") and there is Breedlove, backed by Tribe 8. The message: "Not all dykes play acoustic guitar."