President Bush says he's getting tough on crime in the suites -- but his old friends at Enron might never see the inside of a jail. 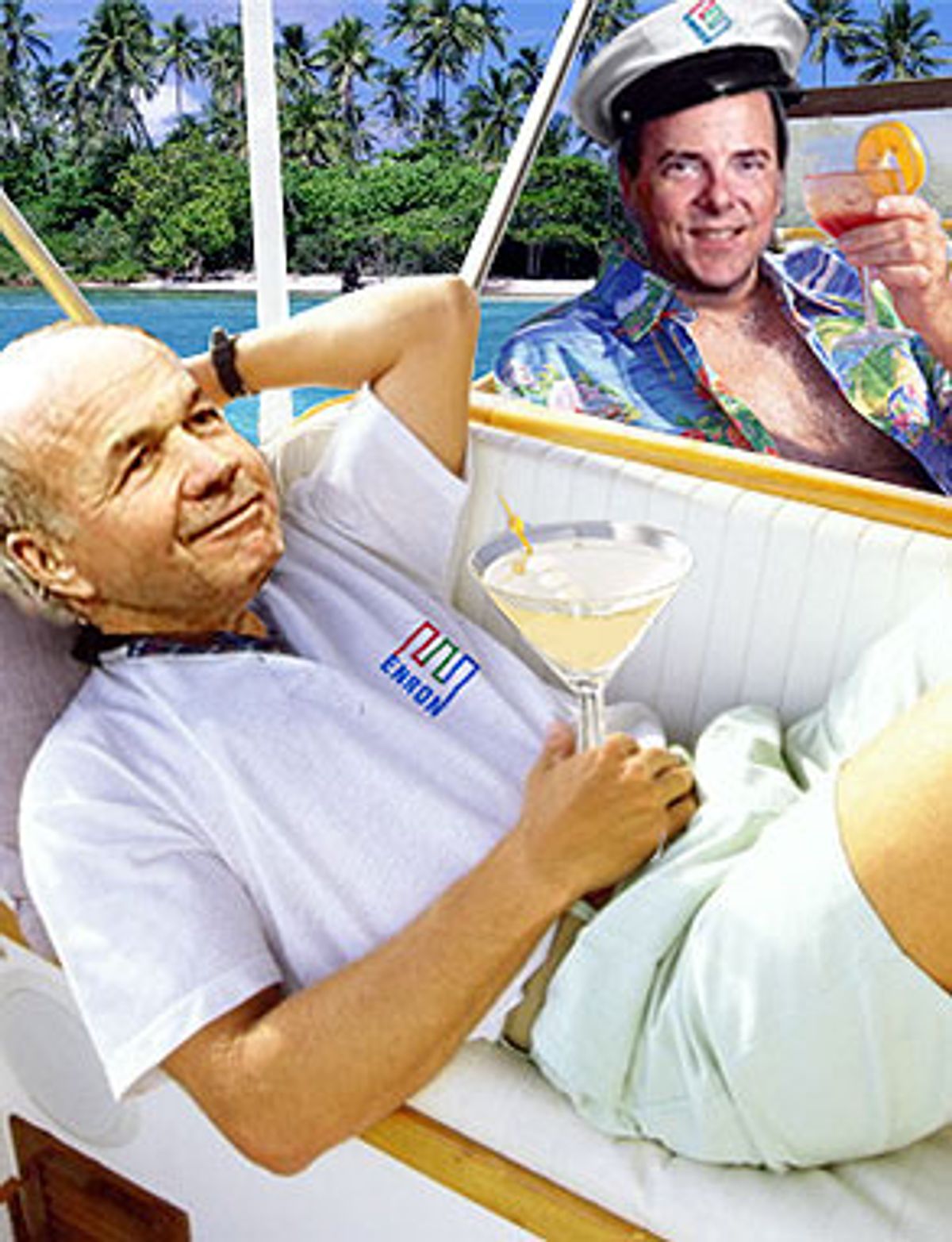 President Bush signed into law the accounting industry reform act on Tuesday, warning that "no boardroom in America is above or beyond the law." On the heels of a series of high-profile federal crackdowns on alleged white-collar crime -- the high-profile perp walk of Adelphia's Rigas family, and likely indictment of WorldCom head Bernard Ebbers -- Bush has been able to start transforming a public image that appeared more corporate lackey than crime buster.

With one major exception.

No one from Enron, the mother of all scandals, has been indicted, despite half a dozen congressional probes and judicial investigations and an SEC probe still diligently proceeding. And according to sources close to the investigation, nobody should hold their breath waiting for ex-CEO Ken Lay to make his own public walk of shame soon -- if ever.

"It's unlikely Jeff Skilling, Ken Lay or even Andrew Fastow will be charged with a crime right now," said a Department of Justice prosecutor working on the case. "We're dealing with a case here where Enron's board of directors signed off on everything, and there were instances where there were some disclosures about these partnerships in federal filings. It makes it much more difficult to prove fraud."

Enron's outside auditors, accountants and law firms signed off on all the company's controversial transactions. That could be a compelling defense tactic, according to the federal prosecutor.

It makes a striking contrast to the situation of John Rigas, the founder and chief executive of Adelphia, and his two sons, who were charged with looting the company by using more than $1 billion of company funds for personal business without disclosing it in Securities and Exchange Commission filings, an apparent bald-faced money grab. The corporate reform bill signed into law by Bush Tuesday forces CEOs and CFOs to certify their company's financial results and requires executives to give back any ill-gotten gains. Had this legislation been in place prior to Enron's bankruptcy, Ken Lay and Andrew Fastow would almost certainly have found themselves behind bars after details of Enron's financial machinations were revealed.

But now is a different story. Enron made arcane references in past SEC filings to some of the complicated shell partnerships, particularly LJM and Chewco, it used to hide its debt, also disclosing that an Enron executive managed the partnerships. The SEC failed to review many of Enron's past filings with the agency until it was too late. And despite the appearance of impropriety, Enron's executives vetted all transactions through its board of directors and its auditing firm Arthur Andersen to use the partnerships. That means Skilling, the former president of Enron; Fastow, the ex-chief financial officer; and Lay, the former chief executive, could have a rock-solid defense.

And for a lot of people, that smarts. Especially politicians who have worked anti-Enron sentiment into such a fevered pitch, like Sen. Dianne Feinstein, D-Calif., who said Lay should be sent to prison and forced to pay back Enron's investors hundreds of millions of dollars he received by selling stock, or Sen. Barbara Boxer, D-Calif., who said, "If Ken Lay knew about what Enron was doing, he should spend some time in prison."

And on Tuesday, Senate Majority Leader Tom Daschle, D-S.D., suggested the SEC and the newly formed Corporate Task Force could bolster their credibility with a few key trophies. "I don't know why we haven't seen any indictments of Enron yet," Daschle said. "I think more and more people, as I travel the country, ask, Why have there not been any indictments? What is going on there?"

And the public certainly followed their lead. In February, at the height of the scandal, a CNN/USA Today/Gallup Poll showed that 65 percent of the public thought Enron executives "did something illegal" (another 26 percent settled for "unethical"). More recently -- and far less scientific -- CNN's "Moneyline" asked voters to respond online to the question: "How important is it to you as an investor that Enron executives ultimately be indicted?" Of those who responded, a whopping 97 percent said "very," with 1 percent answering "somewhat" and another 1 percent saying it was not important.

How will that same public stomach images of Lay and other Enron executives lolling about in their Texas mansions on the one-year anniversary of Enron's implosion? And what will that mean for a president whose own close ties with Lay and Enron are fixed in the public's imagination?

Informed observers believe indictments are still likely, if not close. Phillip Hilder, a former federal prosecutor who represents Enron whistleblower Sherron Watkins, said he believes "indictments are absolutely inevitable." Hilder explains that "it would be naive to think there wouldn't be any indictments after all the evidence is in. There's too much pressure on the government not to indict. The evidence I have seen is leaning toward indictments."

Hilder also thinks political pressure on the Justice Department makes expediency all the more likely. "It's understood within the ranks of the Justice Department that indictments will have to be handed down before the November election in order for the Bush administration to show that its close ties to Enron had no bearing on the government investigation," he said.

A Newsweek report also suggested this week that the Justice Department prosecutors "have dramatically accelerated their probe of Enron" and that an "indictment of the firm's former chief financial officer, Andrew Fastow, could come as early as next week."

But both the prosecutor and Justice spokesman Bryan Sierra have denied such claims. The Enron probe is "not about politics," Sierra said. "If and when charges are filed against former Enron executives it will be only when the Justice Department is certain it has very strong evidence and an open-and-shut case."

But it could take, according the DOJ prosecutor, as long as two years to fully understand the scope of Enron's partnerships and whether Fastow or other Enron executives engaged in fraud. The Justice Department is hoping to secure the cooperation of people who were directly involved in the partnerships and now face the threat of being sent to prison for fraud, the prosecutor said. Case in point: Last week Justice said it had indicted three former British bankers who worked for London-based National Westminster Bank, which owned a 45 percent stake in an Enron partnership managed by Fastow, and were charged with siphoning $7 million from the bank after it sold its share in the partnership in April 2000. The bankers were indicted last week and are expected to be extradited to the United States soon.

There's certainly no proof that the government is going soft on Enron or its partners. In June, a Houston jury found Arthur Andersen guilty of obstruction of justice for shredding Enron documents after the SEC said last October that it was investigating the company's accounting practices. And this week lawmakers claimed that Merrill Lynch aided and abetted Enron in some slippery investment deals.

But that's not the same as bagging one of Enron's big names. Newsweek also reported that lawyers for Fastow have tried to arrange a plea bargain. But a source close to Fastow claims Fastow was recently approached by the Justice Department and offered a deal in exchange for leniency, and that Fastow vehemently refused. "In his mind, he did nothing wrong," the person close to Fastow said. "He was just doing his job."

Hilder, meanwhile, says, "I don't believe the government will try and offer Fastow a deal until after charges are filed. The government, from what I hear, wants to make Fastow the poster child for corporate greed and they will parade him around in front of the news after they indict him to prove it."