Julia Roberts and David Duchovny can't save this funny mess about the split between the movies and the real world -- or something like that. 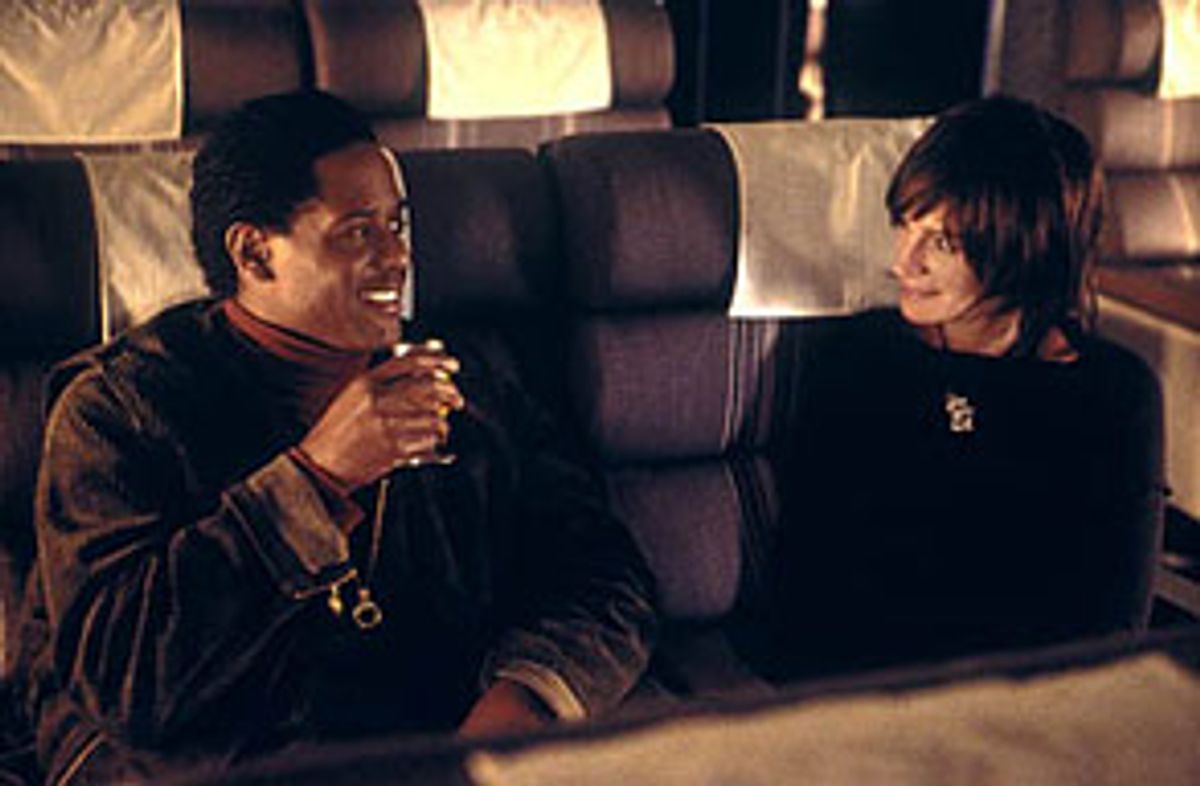 When a movie is cut together to distract you from the truth that there's no there there, you know you're in trouble. Steven Soderbergh's baffling comedy "Full Frontal" isn't badly edited: In fact, its editor, Sarah Flack, is the same person who cut together Soderbergh's 1999 "The Limey," one of the most beautifully prismatic movies of the last 50 years. Aside from a few well-shaped moments from some of the actors, the editing is about the only thing that keeps your mind occupied in "Full Frontal" -- and any good editor will tell you that's a problem.

"Full Frontal" is all about its editing because it has to be. Soderbergh may have a point to make here, or at least a story to tell, but damned if we can figure out what it is. If there's anything here at all, Soderbergh has cleverly hidden it in the movie's overly complex facets; the whole thing feels like a ruse, a tactic to cover up the fact that the picture is constructed around a core of flimsy -- or, worse yet, nonexistent -- ideas.

"Full Frontal" is a network of interlocking stories about seven friends: There's the actor Nicholas (Blair Underwood), who is starring in a movie with Francesca (Julia Roberts, in a slight but teasingly prickly performance). Nicholas is having an affair with the crisp-edged human-resources exec Lee (Catherine Keener), who is married to Carl (David Hyde-Pierce), a mopey magazine journalist and sometime screenwriter. Lee has a sister, Linda (Mary McCormack), a lonely massage therapist who hopes to find love with an Internet acquaintance. The person who links them all is the mysterious movie producer Gus (David Duchovny); they've all been invited to a gala birthday party in his honor -- the movie takes place in the day preceding.

Soderbergh shot "Full Frontal" himself, using a combination of digital video and film, and you'll certainly be able to tell which is which. The film sections constitute the movie within a movie -- in other words, the picture that Nicholas and Francesca are starring in, in which she plays a tough magazine reporter and he's the second-banana film actor she's interviewing and may be falling in love with. (One of the things the movie does skewer successfully is Hollywood's queasiness about interracial love scenes.) The digital video sections of "Full Frontal" aren't as grainy-looking as much DV work -- Soderbergh appears to have taken a great deal of care in setting up his shots and making sure his sets were well-lit.

But the story never kicks in with enough force to take your mind off the movie's drab, fringey look. I think "Full Frontal" is a movie about the disparity between the false world of movies and the real world of, well, the real world. It's also a story about people who are just looking to be loved. But Soderbergh doesn't have any idea of how to freshen those themes -- or maybe, as despairing a thought as this is, he doesn't think he has to bother.

The script, by playwright Coleman Hough, has a loose, improvisational feel that should give these terrific actors some space to roam, particularly given that one of Soderbergh's great gifts as a director is his relaxed, apparently intuitive approach to guiding actors. But the cast members of "Full Frontal" just seem lost. Keener's Lee is a grown-up in arrested development; she and McCormack's Linda survived the trauma of tragically losing their father when they were very young, and both have dealt with it -- or not dealt with it -- differently. Lee works out her strange, hostile quirks at her job, needling, teasing, humiliating and befuddling the employees at her company. (As they worry about whether or not she's going to fire them, she tosses an inflatable globe at them with a pro basketball player's force and asks them to name the countries of Africa, an exercise that seems to mean something to her but is inexplicable to them.) At home, she's distant and brittle with Hyde-Pierce's mild-mannered Carl, who loves her dearly but fears, correctly, that she's bored with him.

Lee also likes to pick at the shy, retreating Linda, criticizing the birthday gifts Linda has given her over the years and nagging her to find a "real" boyfriend (as if Linda hasn't tried). Keener is the biggest ball of energy in "Full Frontal," but you never quite get a grip on her character, and you never feel as much for her as you should. And Hyde-Pierce has one lovely moment when, after discovering his dog has passed out after eating almost a whole batch of hash-laced brownies, he rings the vet to ask for an emergency visit. The scene starts out funny -- Soderbergh uses some nice jump-cutting to show the dog in various stages of numbed-out bliss -- but Hyde-Pierce swiftly takes it to another level, his voice cracking as he explains that he simply doesn't want his dog to die. (Canine lovers breathe easy: The pooch lives.)

Soderbergh and Hough have thrown in some touches that are intended to seem clever and quirky -- one man's predilection for autoerotic asphyxiation; a goofy play about Hitler that stars a very self-serious actor played by Nicky Katt; a neighbor of Carl and Lee's who is always, inexplicably, dressed as Dracula, even just for simple daily chores like taking out the trash. But all of those touches add up to nothing more than surface madness, as opposed to the deeper, more genuine kind. It's a charming inside joke when we see clips from "The Limey" inserted here and there in the picture (we glimpse the star of that movie, Terence Stamp, talking to a fellow airplane passenger and walking through a hotel lobby). But what do they mean? The clips' inclusion is a little touch that will make moviegoers-in-the-know gasp and chuckle, but there's also something a little self-congratulatory about it -- those clips seem to smirk at us instead of just winking.

Soderbergh is still one of Hollywood's most interesting directors, partly because he has no fear of conventionality ("Erin Brockovich" and "Ocean's 11" are old-fashioned entertainments with a devotion to craftsmanship at their core) and partly because you never know what he'll come up with next ("Traffic" seemed leaden and ponderous after "The Limey," which was as fleet and tight a little picture as any contemporary director could hope to make, but at the very least it stands up as a cleverly constructed bit of storytelling).

But interesting directors have to be more wary than anyone of potential potholes, and Soderbergh stumbles into a deep one with "Full Frontal." It feels tossed off and undercooked, a little sardine of a movie that a director lauded as "interesting" may feel he's entitled to make once in a while. There's no law that says a fine filmmaker can't take a breather from doing big, serious projects and have a little fun. But there's something wrong when a filmmaker is having more fun than we are and failing to let us in on the joke. We're left to just sit back and watch the editing go by, wondering if there's something we've missed.