People say I look like you know who. Why me, lord? 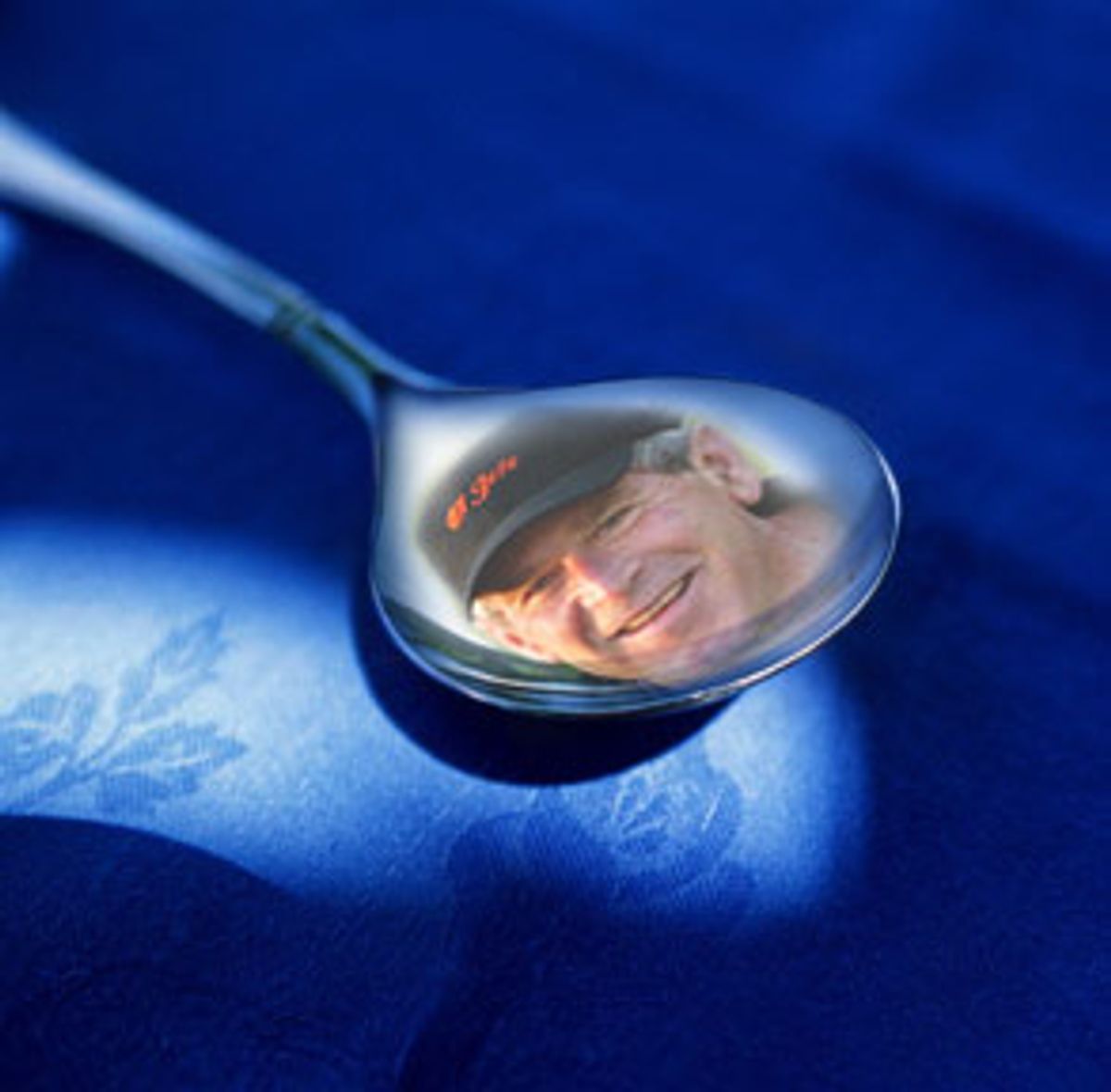 The first time it happened I didn't pay it any mind. I was having lunch with a couple of young women in Manhattan about a year and a half ago; one was an editor at a magazine I was doing some work for, the other was a writer who had just done a nice story for us. The writer had already made some waves with a novel of the I-was-a-teenage-nymphomaniac sort so popular a few years back. For a middle-aged man such as myself, lunches don't get much more promising.

We were just past the introductions, opening the menus and ordering drinks, when the young nympho fixed me with a frank gaze.

"Did anyone ever tell you," she said, smiling coquettishly, "that you look just like George Bush?" I must have shot water out of my nose because she hastened to add, "I find him very attractive!"

"You know, you do kind of," the editor said. The rest of the lunch passed in a blur as I tried to study my reflection in the silverware. At least she didn't mean George Sr.

The next time it happened I was at another lunch. The editor of a men's magazine was interested in hiring me to write for them on a regular basis. We were in one of these clubby old steak houses where you can imagine them killing the steers in the back room, but I was not wearing a suit, nor was my jacket adorned with an American flag stick pin. I was in the middle of making some droll observation when he leaned forward and squinted a bit.

"It's weird," he said, "but you look just like the president. Has anyone ever told you that?"

Once, I admitted, but the woman who said it was so crazy that she thought the president was hot. Maybe, I suggested, people just have Bush on the brain.

"No," he said with determination. "There's definitely a resemblance." Reminding myself how much I wanted the job I grimaced and agreed. For all I knew this guy was part of W's inner circle. For all I knew he thought George was hot.

It would be facetious of me to say that I have nothing against our president. Like half the country, I was appalled when he was elected and prayed for an uneventful four years. And like 95 percent of the country, I prayed even harder when things got eventful last year that he had the character to get us through this crisis. My feelings about his intelligence or qualifications are balanced by a sense of hopeful fear, or fearful hope. As LBJ told the American people, "I'm the only president you've got."

But as my feelings about George W. Bush vacillated I never once thought: Damn! I wish I looked like that. Too beady-eyed, I thought. Too jug-eared. Too weak-chinned. Too ... rich.

I decided that in my media engorged city I was just hanging out with too many people who watched too much TV. Out in the heartland no one would mistake me for the president, or his doppelgänger. I happened to be on assignment in the heartland last October, doing a story in Hibbing, Minn., when I heard those fateful words. I was sitting in a restaurant called Zimmy's -- a sort of shrine to Bob Dylan, Hibbing's most famous son -- interviewing a couple of locals. We'd had a nice talk and I was paying the bill when one of them said to me, sotto voce, "You probably hear this all the time."

Uh-oh. "What?" I said, smiling hopefully.

"You and W?" He made a sort of ambiguous gesture with his hand -- more than amigos? Less than hermanos? I grimaced in reply.

What did these men have in common with the president and me, aside from a pronounced history of substance abuse? Small eyes (though I wouldn't call them beady), a high forehead, a certain fullness of face. I considered growing a beard but my daughter said I would look like an old man while my wife said people would think I was having a midlife crisis. Right. Her hair color changes more than Tom Ridge's daily danger index but it's the price of being a magazine pro. I stop shaving for two days and I'm having a midlife crisis ...

It was the hair, I decided. Like W, I still have most of mine. And again, como mi hermano, I've been wearing it pretty short now for a while. I had long hair in the late '60s and duck tails and who knows what else in the '70s and '80s, but for the last six years I've been getting the same cut every six weeks. Call it The Clooney: the short Caesar cut, inspired by the former "ER" actor, so popular with graying gents a few years ago. Clooney has moved on, sartorially speaking, but for a number of men of a certain age, his old cut remains a no-brainer. You don't have to think about it, let alone do anything to it, yet style-wise you are still several rungs above the full Cromwell.

The problem with my Clooney is that when it grew a little, at about Week 4, it revealed a hairline uncannily like our president's. Change the hair and change the man, I figured, and I returned to New York filled with determination. I let my hair grow longer than it had been in years and started to slick it back; the effect generally owed more to Joe Strummer than Pat Riley but no one was playing "Hail to the Chief" when I entered the room.

I told Alberto, the barber who has been giving me The Clooney for the last six years, that I wanted to go longer. People had been telling me I looked like the president, I explained. He frowned and in his Chico Marx accent said, "That's-a no good." He worked with me, trimming the sides, evening out the top, while I began to fuss with my hair à la John Travolta in "Saturday Night Fever." In a quest to avoid looking like our leader I was becoming high-maintenance.

Things fell apart during the World Cup. When I went to see Alberto, Italy had yet to be eliminated. He was wearing his Del Piero jersey and pacing around his barber chair like a cheetah. He swore he'd been sleeping but he didn't seem to be paying attention as he cut my hair. After he applied some gel I looked like Gumby. I was in danger of morphing from George W. into Ronald Reagan.

The kicker came at a Barnes & Noble store in Brooklyn. I was checking out when the clerk behind the counter did an exaggerated double take. "Damn!" he said, shaking his head and blinking his eyes like Chris Rock. "Mr. President! I was looking for the Secret Service!"

I wanted to point out that my hair was nothing at all like the president's but decided to give it up. For an instant I thought maybe I could do something with this perceived similarity. In the movie "Dave," Kevin Kline looks so much like the POTUS that he runs the country for a few days, à la "The Prince and the Pauper." He even balances the budget in the bargain.

But the chances of me being invited to the White House are about those of seeing George W. on the Brooklyn Bridge. If nothing else, I decided I would take back my hair. I returned to Alberto (long after they'd stopped partying in Brazil) and demanded The Clooney. He seemed pleased with my return to form. The Romans, after all, invented the Caesar cut.

It's been almost a week since then and no one has yet asked me about that Harken stock or mentioned the name Osama. I figure it's all projection anyway. When Clinton was first elected, a homeless man on the subway told me I was a dead ringer for Bill.

Maybe people just recognize presidential material when they see it.