The right man for the job

His county -- and his country -- cried out for him. And Bruce Springsteen came through. 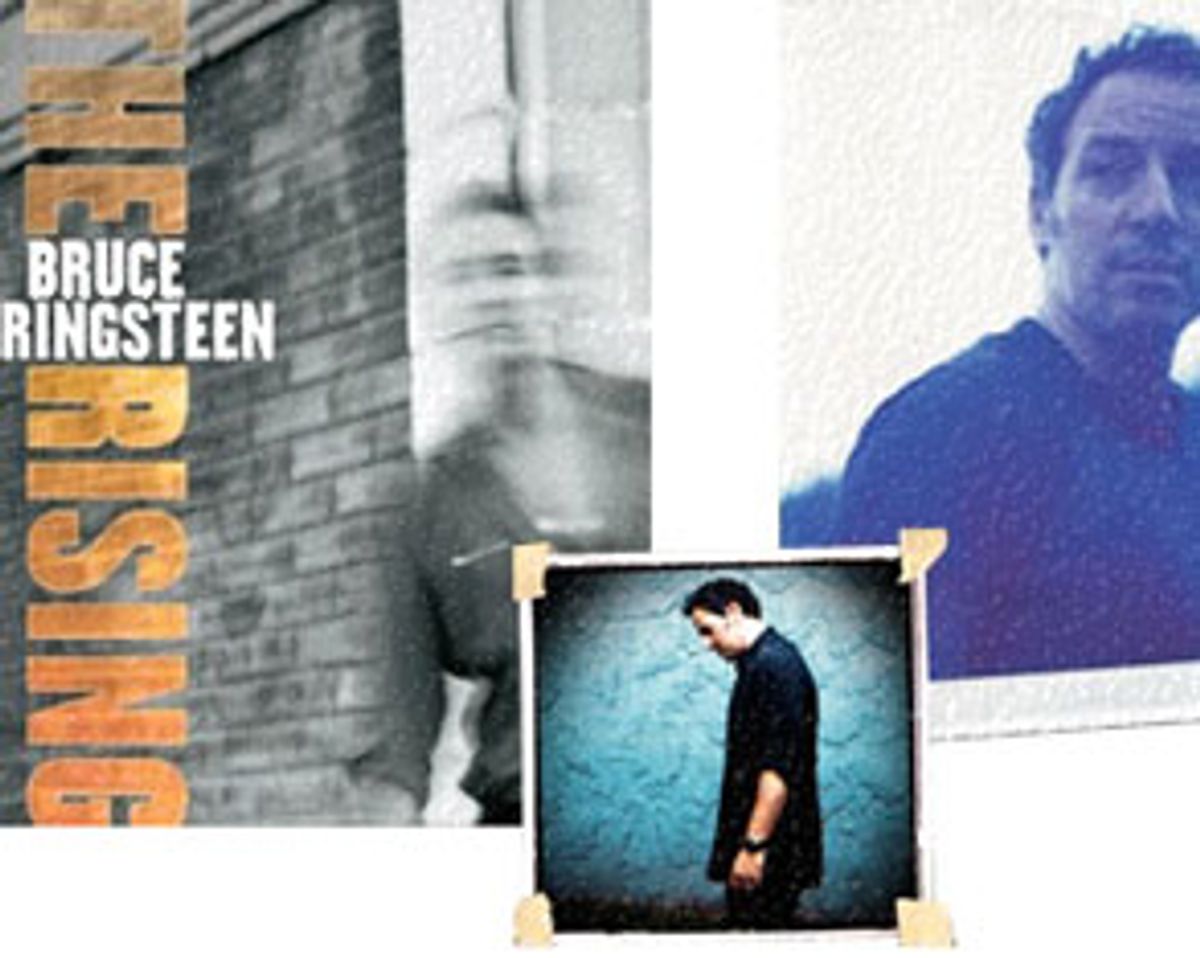 On July 30, Bruce Springsteen released "The Rising" (Columbia), his first studio album with the E Street Band in 18 years. And, for the rest of that week, from the "Today" show to Ted Koppel to the cover of Time magazine, the Boss -- who has been virtually ignored, except by his fans, for years -- was everywhere.

The media hadn't gone this Springsteen-happy since Ronald Reagan misappropriated the lyrics to "Born in the USA." This time, of course, the theme of "The Rising" was the news hook; it's the first full-length Sept. 11-themed work by a rock artist of Springsteen's stature, featuring songs sung from the perspective of the dead, the grieving and the walking wounded. As Time reported, Springsteen found inspiration in part from the New York Times' "Portraits of Grief" section, the thumbnail sketches of lives in full swing that were stopped short that day.

On "Today," Matt Lauer delicately suggested that some people might take a cynical view of "The Rising" as a commercialization of the national catastrophe. But imagine for a moment that you're Bruce Springsteen reading "Portraits of Grief" and you keep coming across your own name. Your music was one victim's passion, your songs were played at another victim's memorial service. Imagine being so much a part of these people's lives that you're included in their obituaries. How do you respond to that? Isn't it more cynical not to respond?

Springsteen makes rock 'n' roll with a folkie's conscience and a soul singer's need to testify. He began his career writing cinematic songs about the fierce dreams of blue-collar kids like himself, hungry for something beyond the pinched ambitions and dead-end lives of their parents. Over the years he has remained true to those kids, and himself, by continuing the story into middle age: The characters in his songs made bad choices and lucked out, drifted and found their way, ran from adult responsibility and finally embraced it.

One hundred and fifty-eight residents of Monmouth County, N.J., where Springsteen lives, died in the Sept. 11 attacks; this was the largest concentration of victims in the state. Overall, the casualties of the attacks, in terms of age, social class and geography, were disproportionately Springsteen's people -- aging boomers who used to be wild and innocent and now got up every morning and went to work each day. People with wives and husbands and kids and mortgages and to-do lists and dreams and maybe an old guitar and boxes of vinyl albums in the attic. Any of them could have been any of us.

There are no anthems on "The Rising," no politics to be misconstrued, no Toby Keith jingoism. These are songs on a human scale; it's a work of great empathy about the attacks' effects on individual lives, and about love and security previously taken for granted. But it's also, more often than you might expect, a spirit-soaring, hip-shaking, roll-up-the-rug-and-dance record that reinforces (though in a very different context) what Springsteen sang almost 25 years ago on "Badlands" -- "It ain't no sin to be glad you're alive."

During the E Street Band reunion tour three years ago, Springsteen began closing shows with the gorgeous "Land of Hope and Dreams," a new song that swayed and bumped like a big old engine rumbling through the night. Springsteen and his longtime band mates, arrayed in a line across the edge of the stage, were a vision of lasting friendship as they sang of a forgiving train that carried "saints and sinners, losers and winners, whores and gamblers, lost souls" to a future where "dreams will not be thwarted" and "faith will be rewarded." Without "Land of Hope and Dreams," or the E Street Band reunion, I'm not sure that Springsteen's response to Sept. 11 would have been so thoughtful and sure-footed.

"The Rising" continues the chugging vision of "Land of Hope and Dreams"; the train is rock 'n' roll, and rock 'n' roll holds within it the essential American ideas: community, reconciliation, redemption, the assurance that you are not alone. "The Rising" needed to be an E Street Band record -- when the world is falling apart, you turn to familiar faces and voices. These songs performed solo by Springsteen in his "Ghost of Tom Joad" mode would have been too depressing to bear. Instead, much of "The Rising" is loud and joyous. In spirit, it reminds me of the Four Tops' "Reach Out, I'll Be There," that emphatic declaration of loyalty and compassion made during a different war, a long time ago.

Atlanta-based Brendan O'Brien (Pearl Jam, Rage Against the Machine) is the first outside producer Springsteen has ever used. And O'Brien gives "The Rising" an enormous sound that captures both the E Street Band's power and its subtlety. Although the guitars (played by Springsteen, Steve Van Zandt and Nils Lofgren) and Max Weinberg's drums are pushed forward, you can still hear each complex layer of the band in the deep, clean mix.

O'Brien's task was to make Springsteen sound "modern." But, sometimes, as on the overproduced "The Fuse" (a song that juxtaposes images of death and dread with the life force of sex), the sound is so modern -- tape-looped drumbeat and all -- it becomes generic. (Anybody who thinks a modern Boss is a swell idea is invited to dust off the disco mix of "Dancing in the Dark.") "The Rising" is not a perfect record -- it's a little schizo, in fact. The beach-ball bounce of "Waitin' on a Sunny Day" seems out of place (although I'm not sorry it's here as a mood elevator), and "Let's Be Friends (Skin to Skin)" sounds less like Springsteen than it does John Mellencamp. What's up with that?

Most of the time, though, Springsteen and O'Brien get it right: "The Rising" is emotionally open and haunted by recurring images of fire and dust, faith and strength, the sky and the void, love and loss. It has the soul of a country-gospel record; the lyrics bear witness to pain and trials, but the music -- buoyed by cello, mandolin, dobro, slide guitar, church organ and, especially, Soozie Tyrell's violin -- uplifts.

On the opening track, "Lonesome Day," for instance, Springsteen makes ominous allusions to vipers in the grass and a dark sun on the rise, but the song is a vivacious rocker with a soaring cello and violin hook; listening to Patti Scialfa and Tyrell swing through their gospel shouts of "It's all right, it's all right, it's all right" on the chorus, you almost believe it will be. Springsteen also makes an adventurous attempt at Middle Eastern folk music with "Worlds Apart," which gracefully blends Pakistani qawwali singers, buzzing guitars, Scialfa's sirenic ululations and a surprisingly light, almost ethereal, vocal from Springsteen.

Some of Springsteen's lyrics, like "Lonesome Day" and even the aching "You're Missing," are vague enough to address loss and tragedy in general. Others are wrenchingly specific to the Sept. 11 attacks (although Springsteen never refers to the World Trade Center, New York City, terrorism or Sept. 11). On the steel-guitar driven blues "Into the Fire," Springsteen sings in the persona of a firefighter's widow: "I need your kiss, but love and duty called you someplace higher/ Somewhere up the stairs, into the fire." And on the cathartic title track, the narrator is a dead firefighter or rescue worker whose soul transcends the carnage to receive a heavenly reward -- a "dream of life" that comes to him "like a catfish dancin' on the end of my line." In both songs, the heroes are nameless, which prevents "The Rising" from duplicating the creepy eyewitness literalism of Neil Young's Flight 93 tribute, "Let's Roll."

Springsteen doesn't shy away from the messier emotions and impulses called up by Sept. 11. On "Empty Sky" (a title that could refer to the broken Manhattan skyline or the planeless skies in the week after the attacks), the narrator mourns his loved one and sings, "I want a kiss from your lips/ I want an eye for an eye." On the lovely "Nothing Man," which recalls "My Hometown" in its hushed organ and rockabye lilt, a shell-shocked rescue worker can't fit back into everyday life. And on the ghostly blues "Paradise," a man considers suicide in order to be reunited with his dead wife, a terror victim.

But on "Paradise," the grieving spouse experiences a vision of paradise as a lie, a void, and he chooses to live. That urge, that dream of life, drives the album's best songs, "The Rising," "Mary's Place" and the closing track, the stirring gospel hymn "My City of Ruins." "The Rising" and "My City of Ruins" (which was actually written before Sept. 11, about the decay of Asbury Park, N.J.) are built around similar images of resurrection, ascension and hands clasped in unity. And those images -- "Rise up, come on, rise up," commands the choir on "My City of Ruins" -- are a powerful contrast to the vision of the twin towers falling down, a refusal to let hate, chaos and death prevail.

The song that has so far stirred up the most disagreement among critics is "Mary's Place," which has been dismissed as a nostalgic throwback to E Street barn-burners like "Rosalita." For me, it's the heart of the record. On "Mary's Place," a woman mourns her partner, who died in the attacks ("From that black hole on the horizon/ I hear your voice calling me"); she tries to will his spirit back to her through the music they used to listen to together. "Seven days, seven candles in my window/ lighting your way/ Your favorite record's on the turntable/ I drop the needle and pray," Springsteen sings.

Yes, "Mary's Place" is an old-fashioned, honking E Street party that brings back memories of "The Wild, the Innocent and the E Street Shuffle." But that's the point -- this is a song about a couple whose relationship goes so far back, their favorite album is on vinyl. Ordering the band to "turn it up," Springsteen sends his narrator -- and us, too -- back to a place of comfort and innocence, where the music liberates and heals and the Big Man blows all night.

Of course, Springsteen isn't suggesting that rock 'n' roll can put everything back the way it was. There's an undercurrent of irretrievable loss on "Mary's Place" -- the woman takes to the dance floor with her arms around a memory -- that cleanses the song of nostalgia. And in the song immediately following "Mary's Place," "You're Missing," the narrator recites a litany of all that's not right, while a sighing cello and a trudging rhythm measure out the hard work of surviving: "Coffee cups on the counter, jackets on the chair/ Papers on the doorstep, but you're not there/ Everything is everything/ But you're missing."

Those small details of emptiness sound lived-in, and maybe they are: The Time article revealed that Springsteen telephoned the survivors of some of those Boss-fanatic victims he read about in "Portraits of Grief." One firefighter's widow told Time, "After I got off the phone with him, the world just felt a little smaller. I got through Joe's memorial and a good month and a half on that phone call." You can regard Springsteen's (unpublicized, until Time uncovered it) gesture as opportunistic if you want to. But I think those phone calls, and the way "The Rising" tends to our needs of the moment -- putting us in the company of old friends, giving voice to our sorrow and gratefulness -- feel just about right. This is Springsteen being a good neighbor in the community of rock 'n' roll. We reached out, and he was there.