"After Shakespeare" by John Gross, ed.

Victor Hugo raised him in a s 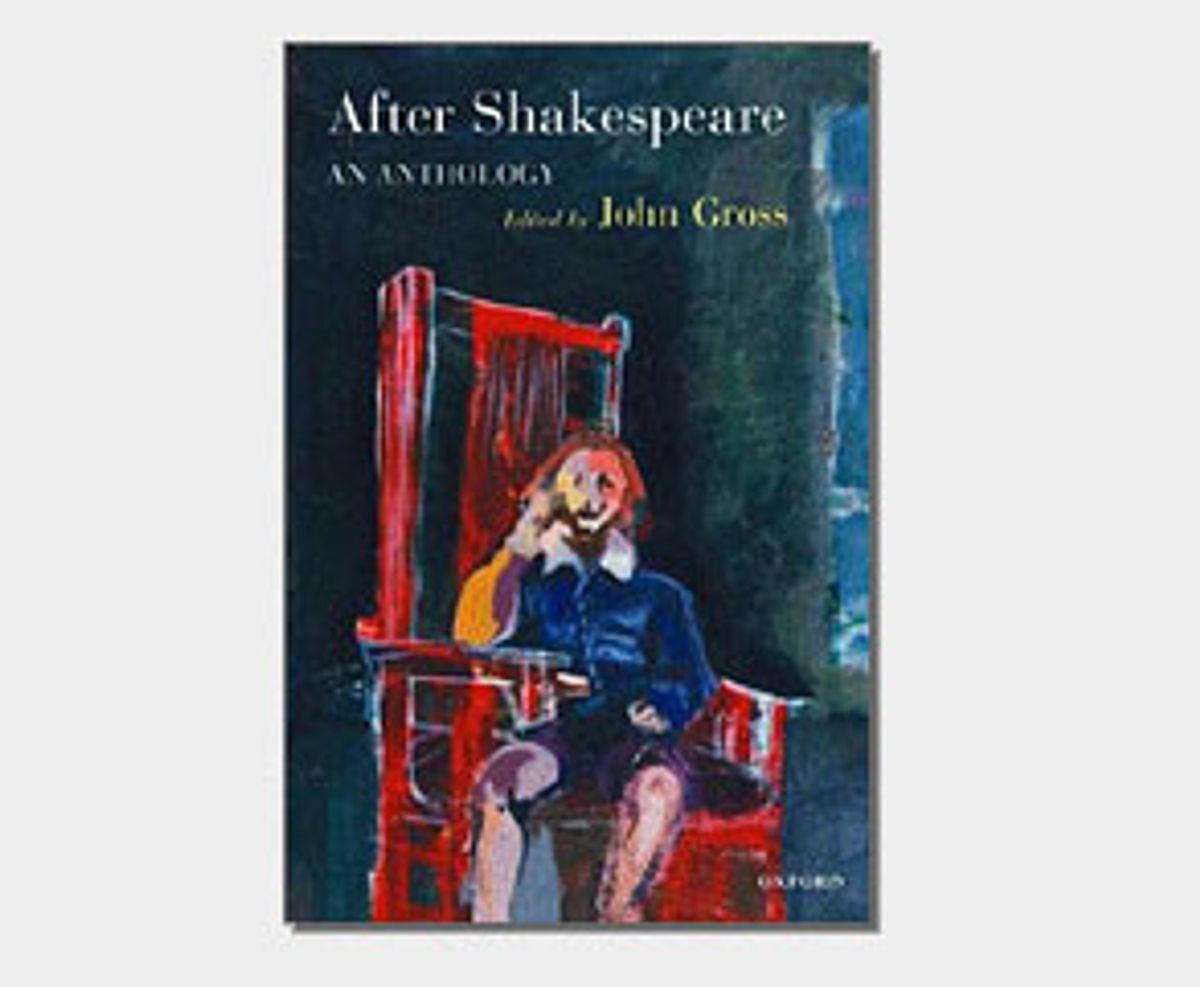 Some 250 years after his burial, William Shakespeare took the trouble to visit French author Victor Hugo at a Parisian seance. At first the others in attendance were perplexed that, through a planchette, Shakespeare delivered his message in perfect French. But the bard obligingly explained that, with the wisdom of age, he now found their language superior to his own -- a lucky break as Hugo himself spoke no English. Then Shakespeare went on, in measured verse, to say that he read Hugo's writing regularly up in heaven, often aloud for the benefit of the other immortals. Cervantes silenced Molière, in order to savor every last word. Aeschylus quivered, and Dante wept, at Hugo's emotional depth. "Your voice is sacred!" Shakespeare proclaimed. "Carry on the good work!"

Few writers before or since have received such a glowing endorsement from their own mothers, let alone from the author of "Othello," "Macbeth" and "Hamlet." Hugo may be unique among writers in his unstinting esteem for Shakespeare, whom he liked to imagine not only in an all-star reading group with Dante and Cervantes, but also in the spiritual company of Isaiah and Saint Paul.

Shakespeare's contemporaries were wary of lavishing too much praise, perhaps for fear of diminishing the magnitude, or undermining the endurance, of their own accomplishments. Most famously, that spirit of competition can be found in Ben Jonson's memorial to his "beloved" colleague -- prefacing the First Folio of Shakespeare's plays -- where he writes that the bard had "small Latin, and less Greek." While the same poem also gives us the line "He was not of an age, but for all time!" that five-word jibe about Shakespeare's shaky language skills has quietly inspired centuries of speculation that the great plays were written by a better-educated Francis Bacon, Christopher Marlowe, Edward deVere or even, on occasion, Mr. Ben Jonson.

Of course Jonson did not have our perspective on Shakespeare, our blinding reverence. His comment to players who admired their bard for never striking a line he wrote --"would he had blotted a thousand" -- is of a professional bitchiness such as might be found in a feud between Paul Theroux and V.S. Naipaul, as read in the pages of the New York Review of Books, rather than the impassioned rhetoric of a man proving his mettle to other mortals by heaping insults at the foot of a deity.

That inclination, what Shakespeare scholar Harold Bloom has called "the anxiety of influence," didn't take hold until perhaps the next generation. Since then, as can be seen in the pages of John Gross' delightful new anthology, "After Shakespeare," it's been open season. Gross' miscellany is of the sort that few scholars have dared undertake since the 19th century, an antidote to academic tomes that throws together extracts on Shakespeare and his plays from sources as varied as the bard's 400 years of readers. The variations are staggering, but if there's one underlying theme, it's the struggle writers have had in emerging from the shadow of Shakespeare's formidable reputation.

Naturally, the first line of attack is direct insult: "I am afraid we will have no good plays now," Oliver Goldsmith confided to a compatriot in 1762, as noted by James Boswell in his legendary "London Journal." "The taste of the audience is spoiled by the pantomime of Shakespeare." Ever the reporter, Boswell refrained from expressing an opinion to the contrary, but he writes that he thought Goldsmith "a most impudent puppy."

Samuel Johnson was more direct in calling Voltaire to task; the satirist shamelessly abused Shakespeare just seven years after helping himself to material from "Macbeth" for his own 1742 tragedy, "Mahomet." Failing to attain immortality as quickly as he hoped, Voltaire appears to have blamed Shakespeare, whose work he called "a product of the imagination of a drunken savage." It was an outburst in which Dr. Johnson detected just another case of "the petty cavils of petty minds."

Hardly so petty, it must be said, as Lord Byron's snobbery. Speaking of the dead bard to a certain Lady Blessington, he contended,

"All [Shakespeare's] vulgarisms are attributed to the circumstances of his birth and breeding depriving him of a good education; hence they are to be excused, and the obscurities with which his works abound are all easily explained away by the simple statement, that he wrote about 200 years ago, and that the terms then in use are now become obsolete. With two such good excuses, as want of education, and having written above 200 years before our time, any writer may pass muster; and when to these is added the being a sturdy hind of low degree, which to three parts of the community in England has a peculiar attraction, one ceases to wonder at his supposed popularity; I say supposed, for who goes to see his plays, and who, except country parsons, or mouthing, stage-struck, theatrical amateurs, read them?"

Byron's assault is phenomenal, almost impervious to counterattack. In order to disagree with him, one must first admit to being a reader of Shakespeare -- and therefore no more qualified to hold an opinion than a country parson. As an aristocrat, Byron alone is able to brave Shakespeare's plays without risking a loss of class. The rest of us, apparently, ought to concern ourselves with the higher calling of Lord Byron's poetry.

Even Lady Blessington couldn't abide Byron's snide disdain for Shakespeare, and attempted to protect her friend from his own hubris, by insisting to readers of her memoir "Conversations" that he was just being willfully obtuse. Lest posterity question Byron's taste, she turned his argument inside-out: "Could there be less equivocal proof of his admiration of our immortal bard," she asked, "than the tenacity with which his mind retained the finest passages of all his works?"

Nobody, on the other hand, ever doubted that James Joyce venerated Shakespeare. That one great author should be inspired by another is to the credit of both. Yet, even as late as "Finnegans Wake," he seems to have felt the need to keep in perspective the bard's genius, to leave room in the culture for his own. What better way than to call Shakespeare names? In that epic pun of a book, Shakespeare becomes "Sheepskeer," "Shaggspick" and "Scheekspair" (which, as John Gross helpfully notes, may be understood to mean "a pair of buttocks"). Joyce's most stinging insult, though, is to substitute for Shakespeare the name "Shopkeeper:" Against the high art of Joyce's uncompromising literature is set the crass commercialism of the man who "never blotted out a line," a modernist trump in a game Shakespeare never even thought to play.

Joyce's competitive spirit, though, is nothing compared to that of his fellow Irishman George Bernard Shaw, who practically went to the grave entangled in an imagined rivalry with Shakespeare. Shaw's last dramatic work, written at the age of 92, was a puppet-play in which he and Shakespeare (named Shav. and Shakes.) bring their fight out into the open. Charitably, if not convincingly, Shaw ends it in a draw:

"Shav. ... I say the world will long outlast our day.
Tomorrow and tomorrow and tomorrow
We puppets shall replay our scene.
Meanwhile, Immortal William dead and turned to clay
May stop a hole to keep the wind away.
Oh that the earth which kept the world in awe
Should patch a wall t'expel the winter's flaw!

Shakes. These words are mine, not thine.

Shav. Peace, jealous Bard:
We are both mortal.
For a moment suffer
My glimmering light to shine."

Shortly after, Shaw died. Imitation being, apparently, his sincerest form of flattery.

At least Shaw had paid his dues as a playwright by the time he made Shakespeare his puppet, revising the bard's lines. Not so, Lewis Carroll, who got his start as an impudent puppy impressively early, at the age of 13, with his 1845 "Quotation from Shakespeare with slight Improvements." A brief excerpt:

"P[rince Hal]. ... This sleep is sound indeed, this is a sleep
That from this golden rigol hath divorced
So many English --

P. My liege, I know not, save it doth enter
Most apt into the metre.

K. True, it doth.
But wherefore use a word which hath no meaning?

P. My lord, the word is said, for it hath passed
My lips, and all the powers upon this earth
Can not unsay it."

Carroll's technique is undeniably clever; the boy shows that he can see through Shakespeare's artifice, playfully posing as bard at his writing-table. A stunt suitable to a precocious student, it has the potential in more experienced hands to achieve something almost profound. So it goes with Tom Stoppard's "Dogg's Hamlet," in which the whole play is first reduced to 15 minutes, then, as an encore, less than half that:

Hamlet. Angels and ministers of grace defend us!
(Exit, running, through rest of speech.)
Something is rotten in the state of Denmark.

Ghost. I am thy father's spirit.
The serpent that did sting thy father's life
(Enter Hamlet above.)
Now wears his crown.

Hamlet. O my prophetic soul!
Hereafter I shall think to meet
To put an antic disposition on. ... "

Within the next 24 lines, Polonius, Ophelia, Gertrude, Laertes and Claudius have dutifully made their entrance, and perished. After which, it remains only to be said that:

Hamlet. The rest is silence. (Dies.)

Obviously meant in good fun, "Dogg's Hamlet" also offers an unusually clear-sighted analysis of Shakespeare's dramatic structure. It's an unmasking; it demystifies one of the world's great plays and suggests, inevitably, that Stoppard's insight is its equal in literary merit. Stoppard's first major theatrical work, "Rosencrantz and Guildenstern are Dead" implies something more: Lifting two relatively minor characters from "Hamlet," Stoppard makes them worthy of their own play, transforming their flawed morality into a full-scale philosophical inquiry. A tribute to Shakespeare, certainly, in suggesting that even his smallest characters are richly human, but Stoppard's is also an effective strategy for a writer wishing to be seen as the bard's next of kin.

John Updike may have had a similar idea in "Gertrude & Claudius," his recently published prose back story to Hamlet -- only, by cutting in ahead of Shakespeare chronologically, Updike preempts him in a sense: Preposterously, it's as if Shakespeare were following in Updike's footsteps. Updike's prequel even shrewdly weaves in lines from the opening scenes of Hamlet, blending prose into play. "Claudius finished with Hamlet by bluntly stating -- where others had been pussyfooting for years -- that he did not want Hamlet to return to Wittenberg: 'It is most retrograde to our desire.' He relished the imperious ring of this, but softened it by beseeching his stiff nephew to bend, to stay here, in Elsinore, 'here in the cheer and comfort of our eye, our chiefest courtier, cousin and our son.'" Updike's method is impressive: It may be the first case ever in which Shakespeare appears to be plagiarizing himself.

So it comes full-circle. Yet, it's doubtful that Updike has given Shakespeare any reversed anxiety of influence: Ever since Victor Hugo died, the bard's only earthly interest has been in bringing the Broadway production of "Les Miserables" to heaven.