Cooler gadgets! Mini-mutants! A mad scientist on a mysterious island! Robert Rodriguez follows up his 2001 smash with another comic fantasy that'll please adults as much as kids. 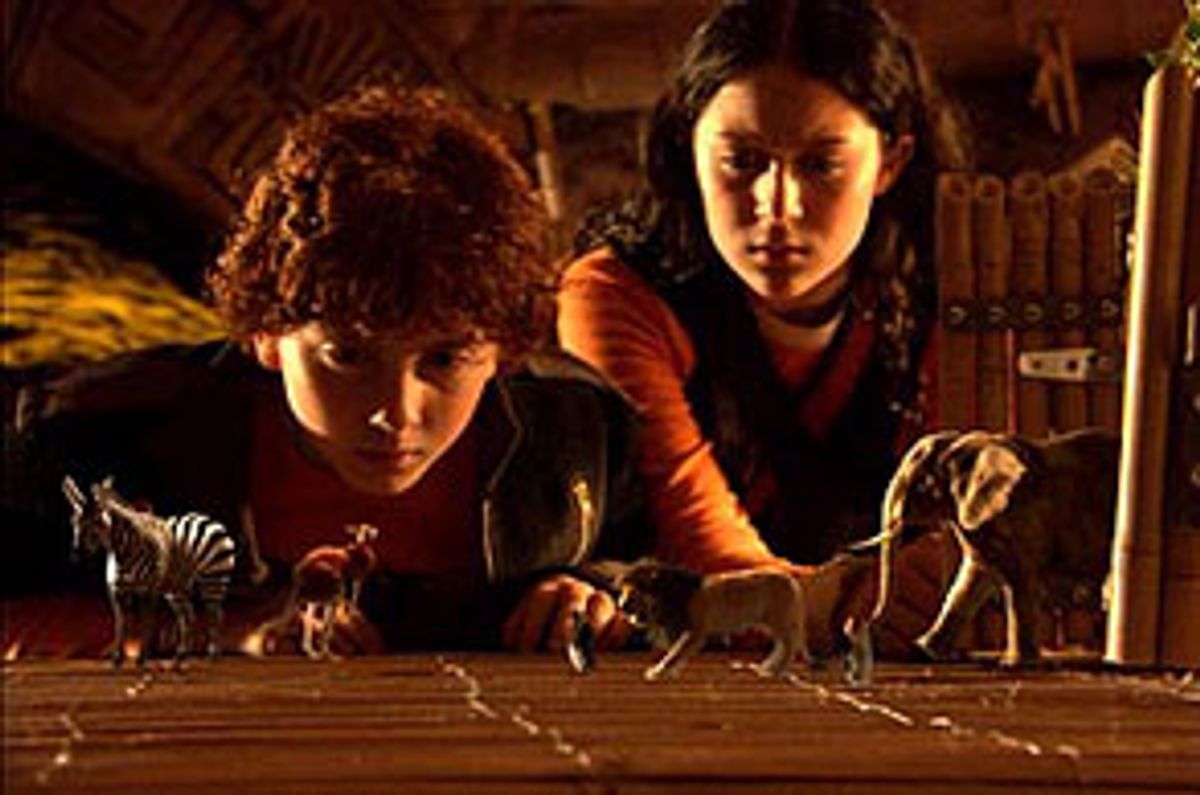 Filmmakers who think they know what kids like, without taking into account the things they like themselves, always end up making movies that talk down to their intended audience. Thank God Robert Rodriguez isn't one of them.

Rodriguez is that rare filmmaker who doesn't draw a hard, fixed line between entertaining kids and grown-ups -- he knows that in order to understand what will delight kids, you have to know what will tickle adults as well. His 2001 "Spy Kids" was ostensibly made for children, but it had more stylishness (not to mention a better plot and cooler gadgetry) than any James Bond movie made in the past 10 years. Now, with "Spy Kids 2: Island of Lost Dreams," Rodriguez has given us a sequel that builds onto and expands on the original, as opposed to simply rehashing what worked before.

"Spy Kids 2" doesn't hang together quite as well as its predecessor did -- it feels a little broader and slightly more forced in places. But its moments of awe and wonder (two of the things we supposedly go to the movies for but are consistently denied) more than make up for that. Rodriguez is a pop filmmaker of the best sort: He takes the things that delighted him as a young moviegoer and freshens them for a new audience, as well as for those of us who remember them from the first time around.

In "Spy Kids 2," the well-respected kid-spies Carmen Cortez (Alexa Vega) and her younger brother Juni (Daryl Sabara) find themselves challenged by a pair of uppity blond rivals: Gary Giggles (Matt O'Leary) and his little wiseacre sister Gerti (Emily Osment). Their father, Donnagon (Mike Judge, creator of "Beavis and Butt-head" and "King of the Hill"), has somehow been named the head of the supersecret spy organization they all work for, a post that Carmen and Juni's dad, Gregorio (Antonio Banderas), had hoped to get.

Something about the appointment doesn't seem right, and when Carmen and Juni unfairly lose a plum assignment to Gary and Gerti, they engage in a bit of hacking so that they can investigate what's going on. Their adventure takes them to a mysterious island. When Gregorio and their mother, Ingrid (Carla Gugino), lose the ability to track the kids' whereabouts, they set out to rescue them -- with Ingrid's mom and dad (Holland Taylor and Ricardo Montalban) in tow.

The secret of Rodriguez's success with the "Spy Kids" movies is that he makes you care as much about the characters as he does about the special effects. Banderas is wonderfully funny and light in both pictures -- he reminds us how hilarious he could be as a deadpan dreamboat in the early movies he made with Pedro Almodóvar, like "Law of Desire" and "Matador," as well as in the later adventure caper "The Mask of Zorro." Gugino is lusciously appealing but still completely believable as a mom -- a suggestion that there's no reason for grown-ups to cease being sexy once they become parents.

The same goes, of course, for the actors who play her own parents: Taylor, who has been sensational on TV's "The Practice" as a good-looking judge who hasn't let her age or her professional status stand in the way of her sex drive, doesn't have a whole lot to do here, but she makes the most out of the lines she's got. And her husband is played by the still-gorgeous Montalban who, even in his early 80s (and also, incidentally, now using a wheelchair), glows with as much likability and sex appeal as ever. He plays a grandpa here, but he does so with such charm and savoir-faire that you think of him as ageless.

The charming Danny Trejo also makes a return appearance as the gadget-builder Machete, a guy who, with his rough-looking face and biker ponytail, looks like the last person you'd entrust your kids to, but who is actually among the tenderest souls in the movie's universe.

The kids, of course, are the movie's main characters, and the predicament in which Carmen and Juni find themselves here is that they could be deposed by two kids who aren't nearly the spies they are. The further complication is that Carmen, who's just on the cusp of adolescence, thinks the hotshot Gary Giggles is kind of cute.

Juni, understandably, finds this sickening, but he gets his revenge on Gary during one of the movie's most beautifully staged special-effects scenes, in which the two go head-to-head on the backs of giant mutant animals (Juni's is a combo ape and spider; Gary's is a cross between a snake and a lizard) whose jerkily realistic moves come straight out of old Ray Harryhausen movies.

"Spy Kids 2" is filled with love for those old-fashioned special effects. (In another of my favorite scenes, Carmen fends off an army of skeletons borrowed directly from "Jason and the Argonauts.") And in rendering them as affectionately as he has, Rodriguez may have unlocked one of the secrets of using modern technology to make good old-fashioned special effects. His Harryhausen-inspired creatures don't look or move like computer-generated figures (there's a slight awkwardness to them), and it's precisely their lack of hyperrealism that makes them so believable.

Rodriguez understands movie-fantasy logic perfectly: The more realistically you render a fantasy image, the less the mind believes it. But if you leave the imagination to fill in a few of the blanks for itself, the image takes on a vividness that not even the most advanced technology can inspire.

Rodriguez wrote, directed, produced, edited and shot "Spy Kids 2." He also did the production design and co-wrote the movie's music. You might call him a control freak, although control freaks don't usually have a sensibility as delicate as his. I can't imagine a true megalomaniac coming up with an effect as enchanting as the one that we see about halfway through the movie.

The island where the kids land has only one human inhabitant, a mad scientist named Romero (Steve Buscemi, in a wonderfully eggheady performance). Romero had the brilliant idea of shrinking animals down to size so children could have their own miniature zoos. But his experiment went awry, and he accidentally created a menagerie of mutant creatures who -- as the result of yet another accident -- grew to be larger than life-size and now roam the island freely, terrorizing intruders.

In Romero's secluded island lab, he shows off his miniature creations to Carmen and Juni. He opens a container and out marches a promenade of tiny live animals, from lions to elephants to penguins, any of which could sit in the palm of your hand; there's even a troupe of scrambling monkeys who spill out of -- what else? -- a pint-size barrel.

Romero's mini-mutants are odder but perhaps even more charming: There's a catfish (a spotted house cat with a fish's head), as well as the aforementioned "spider monkey" (really a spider ape, but why quibble?). The movie even has the good grace, ultimately, to bring Romero face-to-face with his own giant escaped mutant creations: It's not that they don't love their daddy -- they were just having fun.

In addition to those animal marvels, Rodriguez gives us the expected array of gadgets and gewgaws: There are dragonfly-shaped submarines, automated nose-pickers and inflatable suits that allow their wearers to float in water (although they have a tendency to bloat, like Violet Beauregarde in "Willy Wonka and the Chocolate Factory").

As he did with the first "Spy Kids," Rodriguez infuses his movie with the sense that no matter how wonderful it is to have adventures, home is also a lovely place to be. The Cortezes live in a fantastic Mediterranean castle, the kind of place you'd want to come home to after a grand caper. It's a setting that's neither urban nor suburban, and it suggests a seamless blending of cultures -- it's a nod to Juni and Carmen's own heritage, but more than that, it's a suggestion that life doesn't necessarily have to be lived within familiar confines.

"Spy Kids 2" is a multicultural movie in the best sense -- not just because it features Latino actors as well as Anglo ones, but because it blends the seams between multiple worlds so deftly that they almost disappear. Rodriguez doesn't shrink the world down to a convenient, manageable size -- he gives us the means to see it all in a broader context, and to recognize that it's bigger than we ever imagined. The bad news is that geography and culture are always going to divide us; the good news is, it's all navigable by dragonfly submarine.