How do we live brokenhearted? 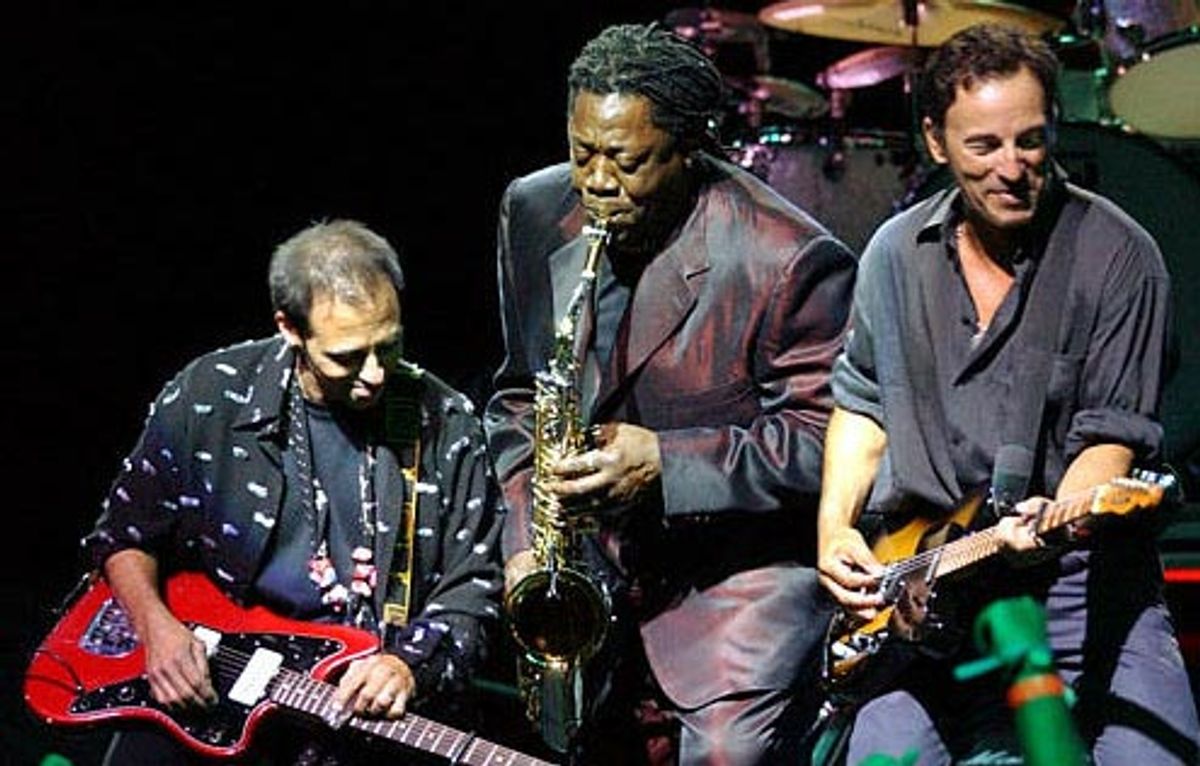 This time, Bruce ain't playin'. During his 1999-2000 world tour, when Bruce Springsteen reunited with his E Street Band after a decade-long hiatus, the centerpiece of the show was often a 10-minute blowout of "10th Avenue Freeze Out." As he prowled the stage drenched in sweat with a mock manic look in his eye, Springsteen preached the healing powers of rock 'n' roll. "Tonight," he bellowed, "I want to throw a rock 'n' roll exorcism! A rock 'n' roll revival! A rock 'n' roll bar mitzvah!"

But those shows were all in good fun; a joyride for Springsteen and his fans as they romped through his 30-year catalog, marveling at the songs' durability and their ability to transport. Kicking off his world tour Wednesday night in his home state of New Jersey at the Continental Airlines Arena, Springsteen again turned to his music in hopes it could redeem and revive. This time there was no mocking.

As the media hype surrounding the release of his new album, "The Rising," made abundantly clear, the attacks of Sept. 11 and the emotional and physical scars connected to them make up the soul of the album. For those tracking the ongoing debate of whether life in America has or has not changed since Sept. 11, Springsteen Wednesday night placed his own small check mark in the "has" ledger.

From the opening note of the blazing firefighter anthem "The Rising," to the closing bells of "Land of Hope and Dreams," it's clear that for now 9/11 has changed the way Springsteen approaches his music. The healing and hurt is front and center, and that's what he sang about last night, again and again.

Drawing heavily from the new record (seven of the first 10 songs were from "The Rising," the new No. 1 album in the country), the efficient 22-song, 140-minute show traded the giddy abandon of this recent concerts for an at times more serious, restrained approach. The result was a more pointed Springsteen effort, but one that asked fans to make small sacrifices of their own.

Springsteen himself never mentioned last September from the stage, offering fans the chance to either ponder the meanings in the fresh offerings or to simply keep time with the new beats. But the musical clues were inescapable. From the "blood on the streets" in "Empty Sky," to the ghosts who haunt loved ones in "You're Missing," Springsteen was focused.

Even during the buoyant new effort "Mary's Place," which Springsteen introduced as a Jersey shore party theme, he was still channeling pain. The song's an extraordinary piece of work, a sort or Irish wake shout-out (or in Springsteen's case, an Irish-Italian wake), told from the perspective of a widow who's lost among friends and family at a house party, yet still feels the grace of her loved one: "Familiar faces around me/ Laughter fills the air/ Your loving grace surrounds me/ Everybody's here."

Two-thirds of the way through the song, with the sold-out crowd in a frenzy, the E Street Band broke it down to bass and piano. Springsteen hugged the microphone and quietly sang, "I've been missing you," over and over again. Then, just like that, the hushed memorial was washed away in an E Street wave as Springsteen was left to belt out the night's central question, "How do we live brokenhearted?"

Perhaps even more poignant was "Into the Fire." Standing in a spotlight with his hand raised he sang out, "May your strength give us strength/ May your faith give us faith/ May your hope give us hope/ May your love bring us love."

Strength, faith, hope and love: the four horsemen of the Springsteen canon. As he so often has done with his music, Springsteen wants to build a community. He wants victims' families to lead us, to show us, to use us during their difficult journey.

That's not to suggest raves weren't uncorked last night. And how could they not be with the mighty, might E Street Band on duty. The rock 'n' roll unit remains a wonder -- like on "Prove It All Night." Springsteen thrashed away on guitar while Max Weinberg pounded the drums with a wild fury, as the song careened from one corner of the stage to another. And than bang! the whole thing stopped and turned for home with frightening precision.

Meanwhile, "Badlands" roared at takeoff like a 747 leaving nearby Newark International. And the new "Waitin' on a Sunny Day," which featured Springsteen greeting front-row fans with an acoustic guitar slung over his shoulder, was drenched in a sweet, syrupy doo-wop sound Springsteen fans haven't heard since "The River." Even though the song's only been in the public's hands for one week, Springsteen threw the chorus to the crowd, which sang back every word without missing a beat. "I'm impressed," he grinned. "I'm impressed."

Dedicated fans they are. Anyone lucky enough to have a pair of face-value ticket to last night's show could have sold them and bought a washer/dryer combo instead. (A pair of nosebleed seats for Springsteen's upcoming Madison Square Garden show is currently fetching more than $1,000 on Ebay.)

Yet even some of those longtime fans might be quibbling with a few of last night's selections. No matter what point Springsteen was trying to make onstage, performing 11 brand-new songs from "The Rising" was probably asking too much. ("Worlds Apart" should be a leading candidate for being cut from the set list.)

Focusing so relentlessly on "The Rising" meant too much of Springsteen's catalog went ignored. No songs from "Greetings From Asbury Park," "The Wild, the Innocent & the E Street Shuffle," "Nebraska" or "Tunnel of Love" were performed. (Not to mention "Lucky Town," "Human Touch" and "The Ghost of Tom Joad," which were recorded, and toured, without the E Street Band.) And only one song from "The River" was performed ("Two Hearts") -- the same "River" song featured during the last tour.

That said, Springsteen still found a way to hit the crowd-pleasing notes. The encores was pure nostalgia, which in New Jersey means cue the house lights and hit "Born to Run." And don't forget "Thunder Road," or "Born in the USA."

The house lights stayed on for "Glory Days." As the song neared its conclusion Springsteen, with guitar in hand, climbed up by Weinberg's drum, rubbed his knees with a smile and merely jumped down off the riser to mark the song's end, rather than jumping up into the air for a bygone flourish.