Asia Argento is a hottie

You just can't take your eyes off her. 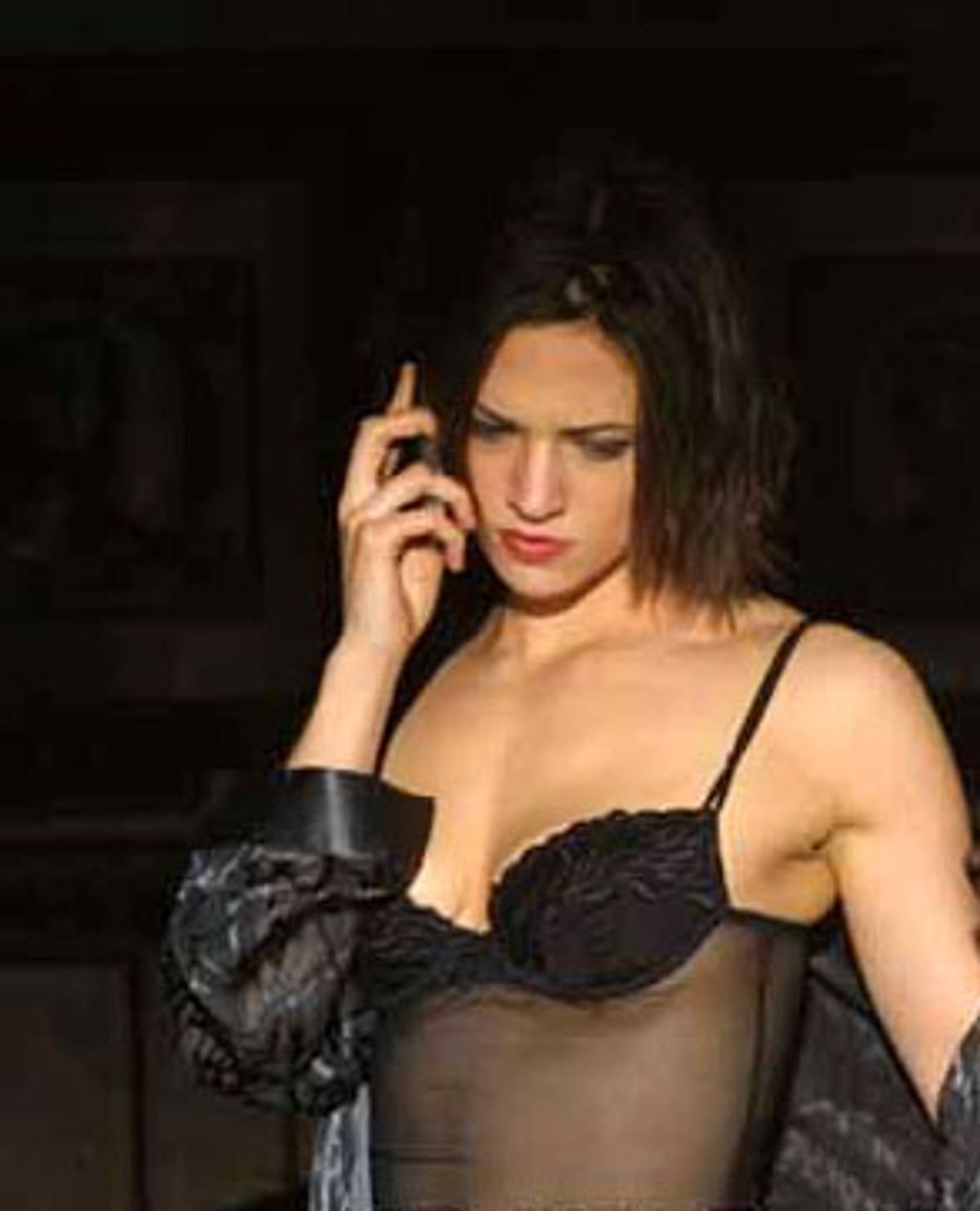 As a nutshell description of Argento's screen presence, that line is hard to top. Argento (whose first name is pronounced ah-zee-uh), takes a standard tough-on-the-outside, tender-on-the-inside babe role and puts some recognizable flesh on it. At times she seems to have the hardest face in contemporary movies. Her high forehead, the long, concave planes of her cheeks, her full lips that seem never to have been home to a smile can epitomize the seen-it-all affect of every chic Euro kid you've seen hanging out in clubs or spending too much money in designer boutiques. Argento makes boredom seem insolent, the way Lauren Bacall did in "To Have and Have Not" when she lounged in a doorway and sneered "Anybody got a match?" making it sound like, "You can hang for all I care." Argento gives the impression that she'd never even admit the need asking for a match would entail. She's the type of girl ready with a cutting remark at the flick of a Zippo -- if only she could work up the energy to give a damn. But like every performer who knows how to makes sullenness sexy, her blasé exterior conceals a low-burning flame.

Diesel's line is so perfect because it is Argento's eyes, big and sooty, that betray her in scene after scene. Forced to watch the movie's baddie coldly kill a group of his cronies by flooding a room with poison gas, Argento lets two tears roll down her face that feel spontaneous, instinctive. So does the trembling fear that enters her eyes when her life is in danger. But if she's vulnerable with her eyes open wide, she's near-predatory when they narrow to almond-shaped slits. Then her insolence turns to sexual hunger, her grazing kisses the prelude to partaking of a ravenous feast. The way Argento and Diesel mash their respective sets of pillowy lips against each other -- softly yet carnally -- is so sexy it makes you want to curse the director, Rob Cohen, for not getting them in bed together. (Argento may be cursing him, too. Asked by Time Out New York is Diesel is a good kisser, she answered, "The best ever. A lot better than my boyfriend." How's that for a weenie shrinker?)

She's certainly glamorously wasted in "Scarlet Diva," the 2000 film she wrote, directed and stars in, which opens today in select cities (a DVD release is expected shortly). "Scarlet Diva" is a train wreck of a movie, and like all disasters it compels your attention. Argento plays Anna, a young Italian actress trying to make her first movie as a director, and sinking into the exotic cesspool of decadence that has enthralled art-house audiences since the early '60s anomie fests of Fellini and Antonioni and Resnais. "Scarlet Diva," though, is a hell of a lot easier to sit through than honored stinkers like "La Dolce Vita" or "Last Year at Marienbad." Anna drifts from drugs to anonymous sex to near-rape at the hands of a scummy American movie producer (played by performance artist Joe Coleman and rumored to based on the more visible -- in more ways than one -- half of an American pair of producing brothers whose powerhouse indie studio is affiliated with one symbolized by a certain mouse).

Our first shot is of Anna on location in her trailer, which rocks as she's screwed by her black costar. (Called to the set mid-fuck, she complains, "Shit! I didn't come.") She opens her apartment door to a buxotic bimbo who claims they've had a previous tryst and has a brief, unsatisfying Sapphic interlude. She falls in love with an Australian rock star and pledges eternal love only to find out he's just as much a user as the other creeps she meets. Nina Simone moaning "Wild Is the Wind" on the soundtrack adds to the romantic misery of it all. And if that weren't enough, there are flashbacks to Anna's girlhood living with her actress mom, a doper who prostitutes herself for drugs. To heighten the movie's aggressively confessional tone, Anna's mother is played by Argento's real-life mother, Daria Niccoldi. The movie ends hopefully, though, in a burst of wacky Catholic imagery in which Anna sees a vision of herself as the Madonna.

If that scene were played for laughs, instead of divine revelation, it might work. "Scarlet Diva" would benefit from the perverse humor of Argento's current ad for Marc Jacobs, photographed by Juergen Teller, in which, posing with her infant daughter Anna Lou, she playfully flashes the baby in her stroller. As far as the movie goes, I don't know that I've ever seen such a display of exhibitionistic masochism before. "Scarlet Diva" is clearly an exorcism of sorts for Argento (and, it could be argued, as much of a horror film as anything her dad ever unleashed), one that mixes shrewdness and naiveté. Straddling the lines of pretension and exploitation, the movie is some sort of Eurosleaze classic in which Argento becomes camera fodder for her own slimy Svengali.

But it's also the sort of terrible movie that probably couldn't be made by anyone without some talent. What sort of talent is another question, as is whether she'll ever harness her sensibility to discipline. To call the movie brave is to play into the little-girl-lost sentimentality that lurks beneath its determinedly "shocking" surface. But it's clearly the work of someone who doesn't give a damn, and that adolescent defiance might, if she can ever get it under control, lead to some daring work.