The "shame" of rape

Why does the media hide rape victims who fight back instead of honoring them as heroes? 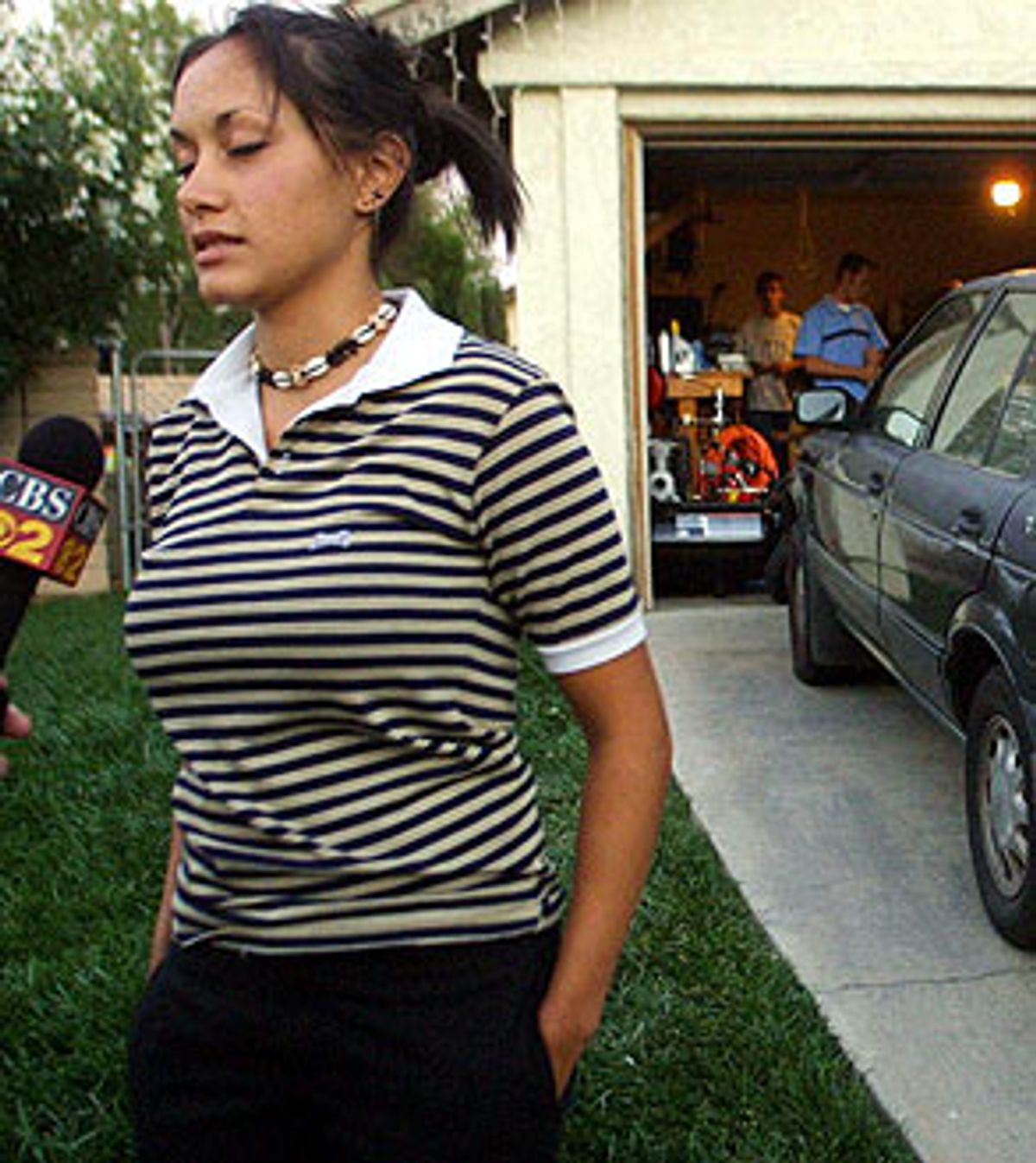 When 7-year-old Erica Pratt was abducted on July 22 and tied up in a basement by her kidnapper, she chewed through the duct tape that covered her mouth, freed her hands and feet, and broke through a door to escape. Electrified by the young girl's feat, the media celebrated Pratt with a prolonged blitz of coverage. She smiled luminously for cameras as awed police officers praised her bravery. Her photo graced the front pages of newspapers across the nation, and she was named Time magazine's "Person of the Week."

When Tamara Brooks and Jacqueline Marris were abducted at gunpoint nine days later from a remote teenage trysting spot in Lancaster, Calif., they devised a plan to break free by stabbing their abductor in the neck. When one girl had the chance to escape, she didn't take it for fear that the other girl -- whom she hadn't met before that night -- would be killed if she abandoned her. These were brave and loyal girls -- heroines who endured mind-numbing terror before police found them and killed their captor, who authorities believe was preparing to murder them and dump their bodies.

But Brooks and Marris were not honored by Time magazine or identified as heroes in other media outlets. Why not? What made their story so different?

Just as newspapers and the networks were scrambling to cover the story, they learned that the girls had been sexually assaulted during their ordeal. Because most mainstream media observes a self-imposed policy of withholding the names and faces of sexual assault victims, the coverage abruptly, and somewhat awkwardly, ground to a halt.

Newspapers and TV broadcasters explained the shift as a matter of courtesy. But in concealing the identities of the young women on the grounds that rape is so intimate and horrendous that they should be spared undue attention, the media helped to promote the unspoken societal belief that somehow, when sexual assault is involved, the victim is partly -- or wholly -- to blame, and should be hidden from view.

TV stations began digitally obscuring the girls' faces. Newspapers like the New York Times rushed to delete the names and photos of the girls from the next day's paper. Some publications, like USA Today, had already gone to press, and printed the story with photos and names on the front page.

The lopsided coverage was especially disorienting because early in the story, the girls' identities were broadcast everywhere -- constantly -- as a means of saving their lives. The idea was to familiarize as many Americans as possible with the girls' names and faces so that average citizens might assist in tracking them, and their kidnapper, down. And it worked. But once the teens went from being kidnapped youths to rescued rape survivors, their status changed. They were branded with the Scarlet R. They had been raped. It was suddenly better for them, and us, to contemplate this shame without fanfare.

In effect, the girls disappeared twice -- once when abducted, and again when the media erased them.

The policy of hiding the rape survivor makes the media complicit in shaming and stigmatizing her. It reinforces the myth that women are too weak, traumatized and tainted to decide whether they want to tell their own stories -- of victory, not victimhood. And this assumption becomes a self-fulfilling prophecy. If raped women were granted the same status as Erica Pratt, there would be no reflex to make them disappear. Their survival would be cause for public honor and respect. Their rescues would be complete; their recovery would begin with heartfelt acceptance by everyone who prayed for their return.

Silence and shame protected the Catholic Church and one of its dirtiest secrets for years. And church officials made the right assumption: If you can't see it, no one will believe it is happening and, more importantly, victims who are shamed and controlled will be quiet, silenced by a sense of complicity and sin. What if all those alleged male sexual assault survivors who went on "60 Minutes" and "20/20" had their faces covered with a gray dot? What if no newspapers or magazines had been willing to publish their names? How much credibility or validity or power can you have when you have no face and no name? Would the public have believed these things had happened if faces had not been attached to the charges?

You can't put a faceless woman on the cover of Time magazine.

Not all rape survivors take the media's cue and withdraw. Many have told their stories as part of their recovery, most famously authors like Maya Angelou in "I Know Why the Caged Bird Sings" and Dorothy Allison ("Bastard Out of Carolina"), and singers including Fiona Apple and Tori Amos. Current bestselling author Alice Sebold has said repeatedly in interviews that she could not have written "The Lovely Bones" until she wrote the story of her rape in her first book, "Lucky."

With each of these acts of bravery has come further acknowledgment that rape is a horrible event and that everyone abhors it, yet hypocrisy -- public and institutional -- still exists. Rapists are rarely successfully prosecuted. For every 100 rapes reported in this country, only five rapists end up in prison. Sentences are relatively light, averaging just 10.5 years, and the usual time served is approximately five years.

U.S. Attorney General John Ashcroft doesn't support the notion that a raped woman should have the right to an abortion. And U.S. foreign policy does not include sanctions, even strongly stated warnings, against countries like Saudi Arabia where men are allowed to rape their wives, and married women raped by men other than their spouses are punished for adultery. In Pakistan, when a young woman was ordered raped by a tribal council as punishment when her brother was seen in public with a woman not in his family, the U.S. State Department took no action.

At the same time that it is no longer socially acceptable to blame or stigmatize a rape survivor for what has happened to her, it appears to be socially unacceptable to recognize her as a hero and honor her for survival. But that may be about to change, thanks, in large part, to Marris and Brooks, two rape survivors who demanded to be seen.

A day after she was rescued and her identity had been quickly masked in the media, Marris appeared on KABC, the local Los Angeles news station, to talk frankly, without embarrassment, about her ordeal. She revealed, among other details, the fact that she and Brooks had tried to escape by stabbing their abductor in the neck.

A few days later, Brooks and Marris both appeared on the "Today" show to tell the story of their capture and captivity, a gripping account in which they described being threatened with a loaded gun, smashing their abductor in the face with a whiskey bottle, and later watching him die.

When asked why they chose to talk about their experience, Brooks said that she wanted to do it, and came forward with the support of her parents, who braved some criticism about the decision. She and Marris, Brooks said, "want to get the message across to everybody to never give up on anything. If you ever give up, you've lost. Whatever obstacles you have, you've got to fight your way through it."

Margot Magowan is a freelance writer in San Francisco.