Hot pursuit of a nonstory 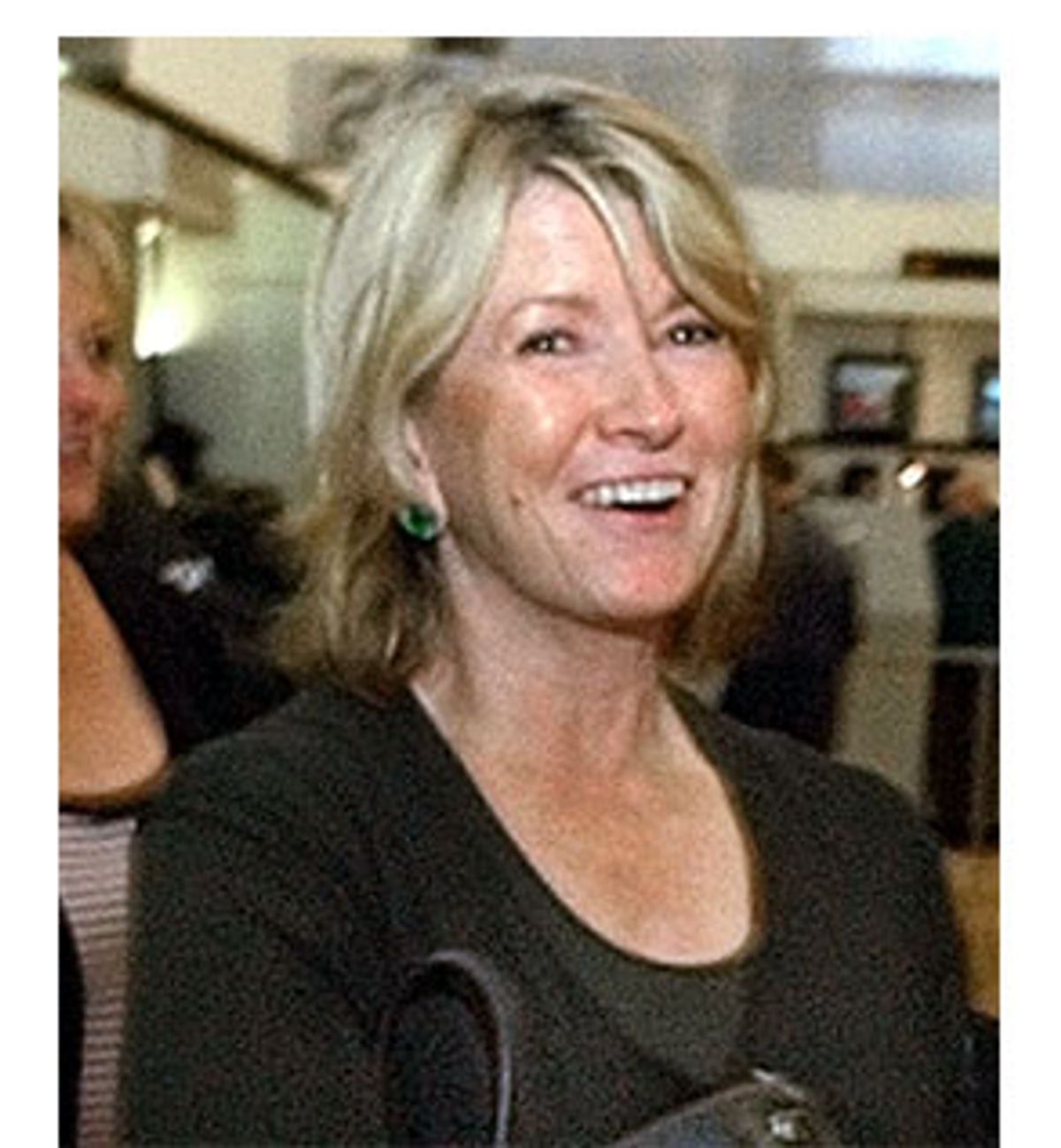 Two or three weeks ago, it looked as if domestic maven Martha Stewart had weathered the worst of her insider trading scandal. Her company, Martha Stewart Living Omnimedia, had taken a beating on Wall Street as investors fretted about the fallout of negative publicity. But interest in her case seemed to be waning.

Perhaps because placed alongside the fraud that drove companies like Enron, Adelphia and WorldCom into the ground, costing investors billions and thousands of employees their jobs, as well as the corrupt practices among leading accounting firms like Arthur Andersen, Stewart's questionable stock trade suddenly looked insignificant. Stewart profited just $48,000 from her now infamous transaction.

Yet during the dog days of August, the story has returned from the dead. Thanks to publicity-hungry members of Congress, who probably shouldn't even being wasting taxpayer money chasing Stewart's dubious alleged crime, and an appreciative press corps -- lead by the New York Times and the Wall Street Journal -- that laps up every Capitol Hill allegation and innuendo without bothering to put the celebrity-driven story in any sort of context, Stewart is back on the grill.

It's a sad example of what happens when congressional investigators and overly excited reporters feed off each other while pursuing an unsympathetic figure.

All this for a relatively minor story that hasn't budged much since June. Stewart, a close friend of ImClone CEO Samuel Waksal, sold her biotech company stocks on Dec. 27, one day before ImClone's value crashed when the Food and Drug Administration refused to OK a cancer wonder drug. Stewart insists she never knew of the pending bad news, and that she and her Merrill Lynch broker already had an agreement in place to sell her ImClone shares once they dipped below $60, which they did on Dec. 27. The broker's assistant now insists that explanation was concocted afterwards and that Stewart knew Waksal and his family members were dumping stock. Basically, it's a he-said/she-said kind of story.

Naturally, Congress and the press like the assistant's story better since it keeps the story alive. But even his story should be of minor concern. He claims on the morning she sold, Stewart knew Waksal was dumping his stock. That's because her broker, on vacation, ordered the assistant to tell Stewart about Waksal's stock activity. If that did happen, Stewart at the most would be guilty of misappropriating insider information, but only if she knew Merrill Lynch policy forbade brokers from discussing what other clients were buying and selling. And that's why criminal charges of insider trading against Stewart remain so remote. Instead, she's more likely to face civil charges from the Securities and Exchange Commission.

For Stewart to be guilty of serious insider trading she would have to have known that Waksal was dumping his stock because of the FDA's pending drug rejection, and that that information was meant specifically for her. To date, nobody involved, not even the broker's assistant, has suggested that. But don't look for that fact to be highlighted by congressional investigators or the press.

Also, don't look for many mentions of a document Merrill Lynch & Co. handed over to Congress which showed that Stewart's broker had written "$60" in apparent reference to Stewart's claim that the two of them had agreed to sell ImClone if it fell below that value. Congressional investigators dismissed the document, saying they could not verify when the "$60" had been written. The press, too, soon tossed the document down the memory hole, preferring to report there's no evidence to suggest there was ever a $60 sell claim.

Instead, the press seems to take its cues almost exclusively from the office of Rep. Bill Tauzin, R-La., Stewart's most relentless critic.

They don't call Tauzin the "Cagey Cajun" for nothing. Knowing the shallow Stewart story will likely evaporate once Congress returns and takes up more substantial issues in September, Tauzin timed his latest press blitz for August's slow news days. The move has proven to be a bonanza. By calling for more documents, requesting a Stewart interview and then threatening to subpoena her to testify (even though Stewart's attorneys thought they had an understanding that no additional requests would be made before September), Tauzin, vowing to "widen the probe," rejuvenated one of the summer's guilty-pleasure sagas.

But has anybody in the press bothered to ask what the House Energy and Commerce Subcommittee on Oversight and Investigations is doing spending months investigating a private sale of 4,000 shares? Especially when the Securities & Exchange Commission as well as the U.S. Attorney's Office are doing the same thing? Doesn't the subcommittee, which has held hearings this year on nuclear power plant security, the collapse of Enron, climate control, energy policy, and Homeland Security, have better things to do with its resources?

Still, members of Congress want the cameras to roll. "Bring her in and if she wants to take the Fifth [Amendment], that's her right. That's her legal right," U.S. Rep. Bart Stupak, D-Mich., said on the "Today" show this week.

But is Stewart's testimony before a congressional committee going accomplish anything other than making sure some members of Congress land a few fat clips on the news that night? Think back to the recent Enron and WorldCom hearings Congress held. Hauling in disgraced, mostly tightlipped company executives to testify before television cameras didn't exactly uncover a trove of facts.

And what about Congress' motivations, and specifically Tauzin's, for wanting to revive the Stewart saga? After all, two years ago Tauzin worked as the accounting industry's point person in the House of Representatives and helped block crucial reforms being pushed by Arthur Levitt, then the SEC chairman. Levitt wanted to eliminate inherent conflicts of interest by banning accounting firms from also doing consulting work for clients they audited. It's a move many experts think would have gone a long way toward eliminating the runaway fraud that has since swamped the accounting industry.

At the time though, fixated on enormous consulting fees, the accounting industry fought back ferociously, with Tauzin as their mouthpiece, arguing Levitt had no proof accounting firms were doing anything unethical. Accounting companies have poured more than $280,000 into Tauzin's campaign coffers over the last decade, which is more than they've given any other member of Congress.

Clearly it's in Tauzin's interest to turn the well-known Stewart into the face of corporate greed and to deflect any questions about his own role in allowing the accounting industry to help drive some of America's largest companies into the ground through fraudulent activity. And so far it's worked. As long as Tauzin and his investigation feeds the Stewart press beast, grateful reporters seem uninterested in asking tough questions about him.

The New York Times and the Wall Street Journal, especially, seem locked in a bizarre battle over which will overhype the story more.

On Friday, the Journal went big once again, splashing a Stewart update on Page 1, above the fold. (In June, when the broker's assistant broke ranks with Stewart, the Journal deemed that Page 1 material as well.) The big news this time was that Stewart's close friend Mariana Pasternak was cooperating with investigators. Pasternak was traveling with Stewart on the day Stewart sold her ImClone stock. Soon thereafter, Pasternak's ex-husband sold his 10,000 ImClone stocks as well.

According to the Journal, Pasternak "may be able to provide information rebutting Ms. Stewart's account of the sale." [Emphasis added.] That was in paragraph two of the story. Just in case readers missed the point, it was repeated in paragraph three: "The testimony of Ms. Pasternak could be central to any case against Ms. Stewart." [Emphasis added.]

It was only when readers turned to the jump on Page A5 that they discovered the Journal didn't actually have a clue what Stewart's friend was saying to investigators -- "It's unclear what Ms. Pasternak has told prosecutors" -- and that the paper's excited lead was pure speculation. What's more, minus that breathless speculation of the first few graphs, the rest of the Page 1 Journal piece was a complete rehash of the already familiar story.

What business news got pushed off the Journal's front page on Friday in order to make room for the stitched-together Stewart tale? Just the blockbuster notice about how WorldCom had revised its bogus accounting numbers from $3.5 billion to $7.2 billion in losses, and how the widespread fraud meant senior management members could be facing ever more serious legal jeopardy.

The news was big enough for Page 1 treatment at the Washington Post, the Atlanta Journal-Constitution, the Los Angeles Times, Orlando Sentinel, Chicago Tribune and New York Times. But the Journal was more interested in detailing the minutiae of a 9-month-old stock transaction that earned Stewart $48,000.

The New York Times has had the good sense not to play the Stewart story on Page 1, but that's been about as much restraint the newspaper of record has been able to muster. For whatever reason the Times remains absolutely wed to the Stewart saga, even though, by any objective news standards, the story does not warrant W. 43rd Street's around-the-clock attention.

Since the story broke in June, the Times has run nearly 50 separate news stories, and has had a tendency to simply rewrite the same story again and again. For instance, the Times has examined the toll the controversy has taken on Stewart's image and her company in dispatches dated June 23, 27, July 4 and July 25. It wrote stories about congressional investigators questioning Stewart stock sales on June 13, 14, 18, 24 and 25. It detailed congressional requests or its receipt of documents on July 8, 9, 16, 24, and Aug. 7 and 9. And it wrote about Stewart's broker on June 22, 26, 30 and July 4.

If Martha Stewart profited from insider trading, or lied to investigators about having an agreement to sell ImClone stocks once they fell below $60, she should be charged with a crime. But if politicians and reporters are using Stewart's celebrity status to boost their poll ratings or circulation, who's going to reprimand them?