Saga of surfer girls in Hawaii is a snooze. On land, that is. On the water, it might be the most intense visual experience you'll find at the movies this year. 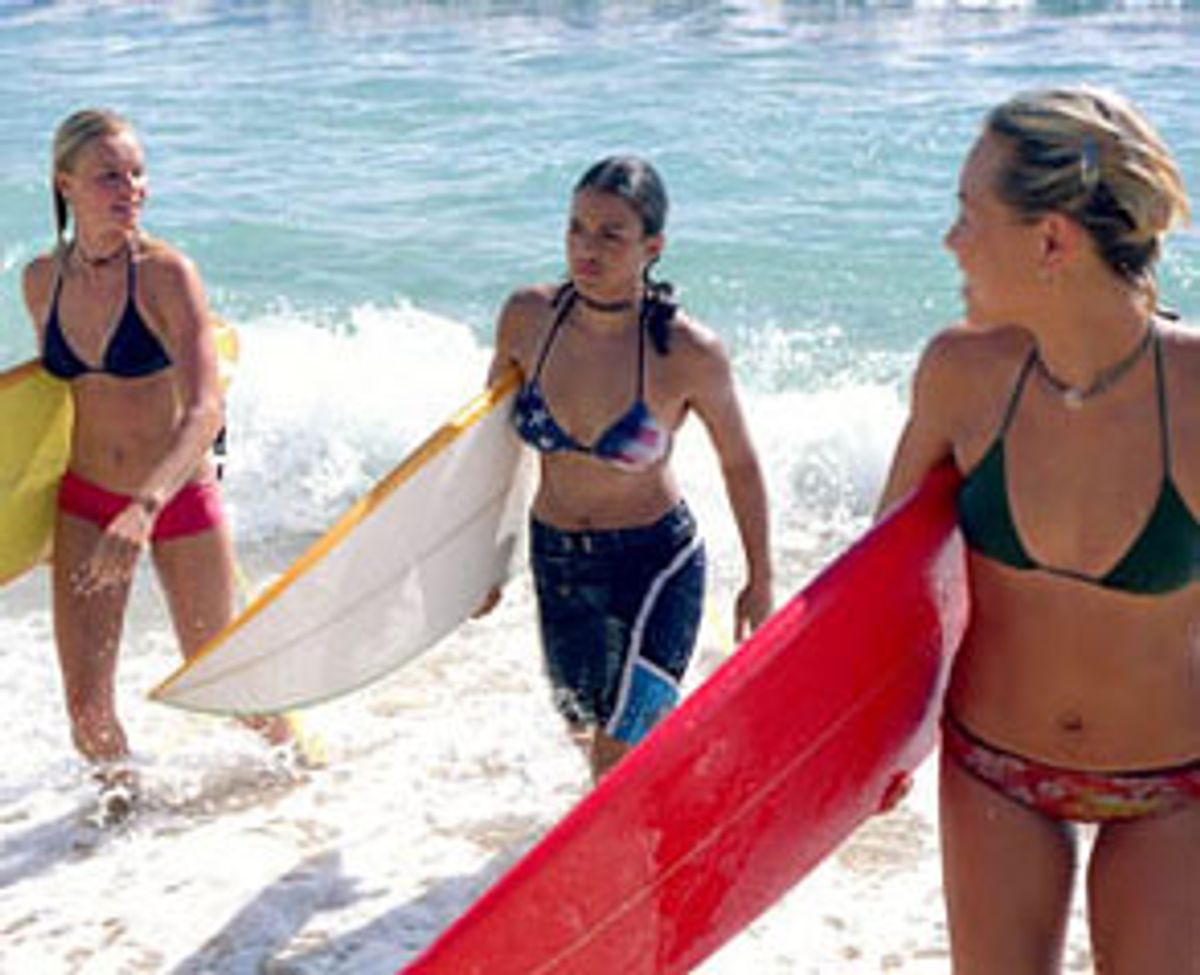 The best moments in the teen surfing drama "Blue Crush" give you the peculiar joy of feeling that, for a few moments at least, you've escaped the laws of gravity. Directed by John Stockwell ("Crazy/Beautiful") and written by Lizzy Weiss and Stockwell (based, I'm guessing pretty loosely, on Susan Orlean's Outside article "Surf Girls of Maui"), the picture is a conventional melodrama about a group of surfer girls sharing a beach shack in Hawaii. The focus is on Anne Marie (Kate Bosworth), whose plan to enter a surfing championship is hampered by her memories of the accident that nearly drowned her.

Naturally, the movie is about how Anne Marie overcomes her fears. It should be huge with teenage girls (and why not? surf movies have always been the province of boys). But I wouldn't be surprised if even those moviegoers most captivated by the plot find themselves tuning it out. "Blue Crush" offers the most intense visual experience I've had at the movies all year. The cinematographer, David Hennings, and the editor, Emma E. Hickox, who works with split-second precision, seem to regard the ocean with the same awe as the movie's surfer girls do. (The movie doesn't use a single blue-screen shot, or any tank shots.) Looking at "Blue Crush," you have no trouble comprehending why surfers worship the ocean. It's a god so immense that obeisance seems the only proper response.

You can take all the shots of rolling surf the movies have given us and not find anything like what you see here. The camera enters into the curl of waves so that the rising wall of water looks like rippling blue-green glass. (When Anne Marie runs her hand along that surface as she rides a pipeline, and we see, from beneath the surface of the water, the trail her fingers leave on the wave, it's a moment of the purest elation.) Hennings and Stockwell don't stop there. There are underwater shots taken (God only knows how) from beneath waves, so that they look the way gathering storm clouds do in time-lapse photography. And there's an incredible shot of what happens when a wave pounds down into the ocean, twisting the water into a shape like pulled taffy, or like a slim, horizontal twister.

Even when the girls are simply floating on their boards, or paddling out to meet an incoming wave, the camera, perched right in the water with them, rides the rolling motion so that gradually we lose the sense of ground beneath our feet. We're as buffeted and cradled by the water as the surfers are, at one with it. Watching the surfers navigate their boards to stay ahead of the curl is like watching nature itself turned into the seeker in a game of tag. The visual beauty of the movie can be enough to make you laugh with pleasure. In one shot Anne Marie, holding a rock to weigh herself down, jogs along the bottom of the ocean, her two girlfriends holding on while they swim behind her. It's as if they've suddenly been turned into her mermaid familiars. The movie was shot entirely on the north shore of Oahu, and the outdoor scenes are suffused with an unusually clear light. You feel as if you could just walk up to the screen and breathe in the ocean air, or feel a fine spray of mist on your face.

If "Blue Crush" floats when it's in the water, it plods on land. The movie makes it easy to understand the surfers' almost ascetic dedication to their sport. But it can't translate their free and easy movement to the constraints of the plot. There are some nice offhand details, particularly the girls' eating habits. Breakfast is a Cup O' Noodles or a Twinkie. And Anne Marie fixes a sandwich -- bologna on white with gobs of mayo and the crusts cut off -- that's the same thing every finicky kid on the playground used to eat.

But the story of the problems facing Anne Marie and her roomies (Michelle Rodriguez, giving the same damn performance she's given in every other movie, and Sanoe Lake, a native Hawaiian and lifelong surfer who has nothing to do but at least has a nice sun-drenched laziness), whether it's where the rent will come from or the partying that Anne Marie's little sister takes to with a vengeance, gets in the way of the looseness the movie should have, of conveying the freedom of their lifestyle. The subplot involving some badass local surfer dudes goes nowhere, and the pro football player (Matthew Davis) that Anne Marie takes up with is too bland to care about. (Bosworth, though, is appealing in her pert-nosed way.)

A few years back, a book of photos appeared called "Surfing from San Onofre to Point Dume: 1936-1942." Taken by Don James, who died in his sleep two days after Christmas 1996, the pictures document the California surfing community that flourished in the '30s and was interrupted when World War II broke out and the Pacific coast was closed down (and the surfers themselves went to war). They are mostly shots of friends hanging out on the beach, picnicking, canoodling or posing with their boards. But these casual shots capture the ease and camaraderie of the community that came together in those years. You look at them and never doubt why James remembered those times for years afterwards, the idyll that they remained in his memory.

That's exactly what's missing from "Blue Crush." But when the waves start rolling in, when Hennings plunges his camera right into the surf so that the power and beauty of the waves are bearing down on us, the plot is the furthest thing from your mind. You just want to keep basking in the movie's watery rapture.