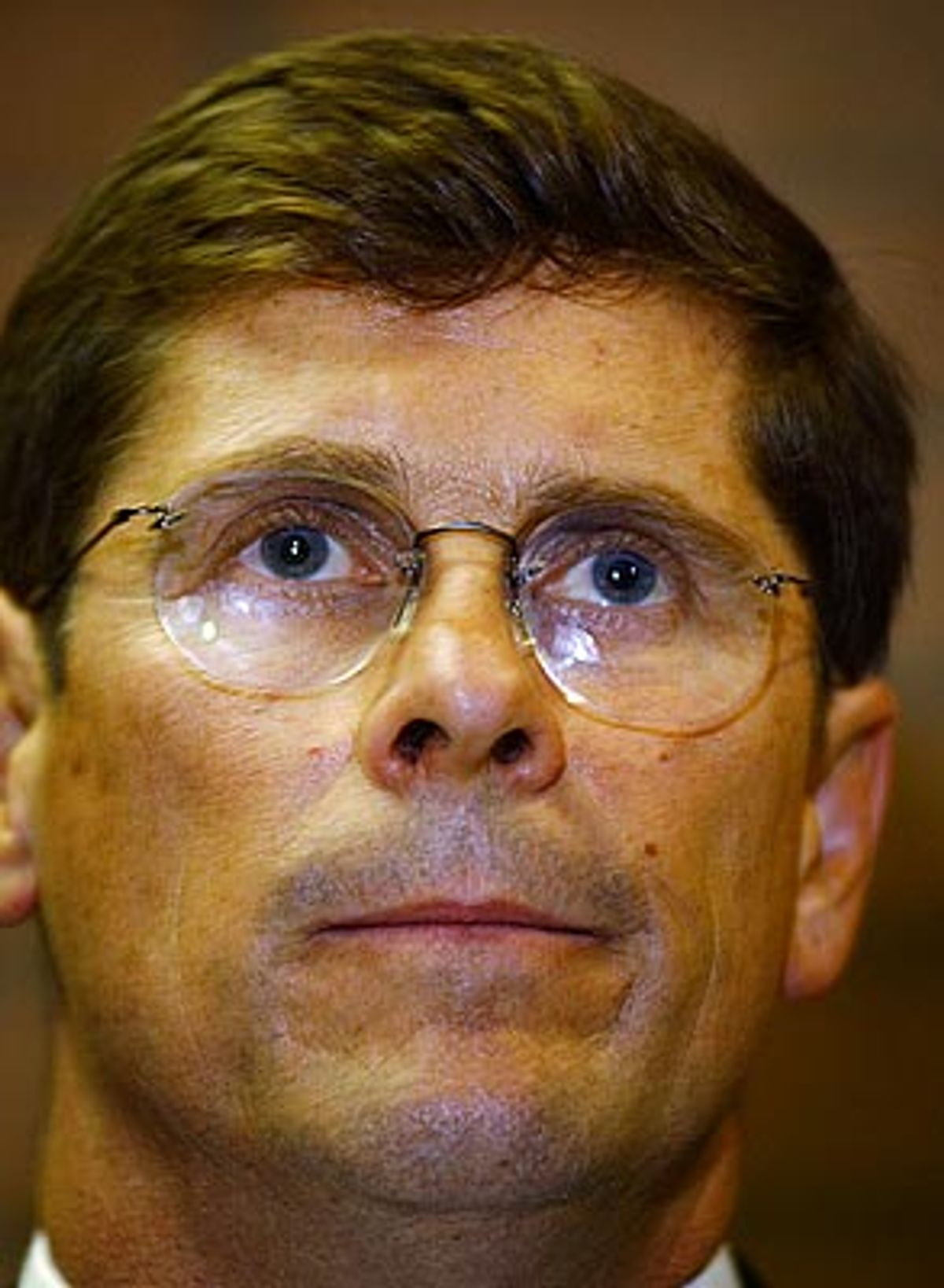 Before Sept. 11 slapped an American flag on the rear end of every sport utility vehicle from San Diego to Yreka, another sort of political statement graced the zaftig rump of California's suburban explorers. It was a three-word commentary on California politics, and for many voters it carried the same sort of universal appeal that those Stars and Stripes stickers held before their meaning morphed from "I feel sad about 9/11" to "Repeal the death tax, put God back in the Pledge, and bomb the daylights out of Saddam Hussein, already."

The bumper sticker said: "Anybody but Gray."

At the time, it was a message of hopeful desperation. Across the political spectrum, Californians found something to dislike in Democratic governor Gray Davis. They blamed him for California's energy crisis, they took offense when he announced that the job of the state's elected legislators was to "implement my vision," and they grew ever more suspicious that his obsession for campaign fundraising had created a "pay for play" environment in Sacramento. But if they could just hold on until November 2002, they could rid themselves of Davis by electing somebody -- anybody -- to take his place.

The problem is that "anybody" had to be somebody, and that somebody turned out to be stumbling Republican gubernatorial candidate Bill Simon. The silver-spooned son of Nixon-Ford treasury secretary William E. Simon might have hoped to hide his political inexperience and hard-right views -- he's antiabortion and pro-gun in a state that's neither -- behind his "I'm a successful businessman" mantra. But that was before the Ken Lays of the world took the sheen off of "businessman," before news broke that the Justice Department was investigating tax shelters that Simon had used, before Simon set off a political fury when he at first refused to release his tax returns. And it was before the investment firm he owns found itself on the wrong side of a $78 million corporate-fraud verdict last month. Simon has declared the verdict "fundamentally flawed," and his lawyers are fighting it. But for now, the jury verdict stands -- a finding that Simon's company defrauded a convicted drug smuggler with whom it was dealing over a pay-telephone company.

Anybody but Gray? Now it's not so simple, even for those who seemed so determined to unseat Davis just a few months ago. As one GOP official acknowledged last week: "People are going to walk into the voting booth in November with their noses plugged, and they're going to vote for the candidate who smells the least."

For the White House, the odor emanating from California is particularly noxious. On the night of the March primary, the president promised Simon that he would do whatever he could to help him beat Davis. Bush will keep his word this week, when he travels to California for three long-scheduled Simon fundraisers. The events will beef up Simon's TV advertising budget -- at the end of June, Simon had about $5 million in the bank compared with Davis' $30 million -- but they're unlikely to produce what Simon really needs: a visible vote of confidence from the White House.

Vice President Dick Cheney spent a day in California earlier this month but managed to avoid a public appearance with the candidate. Smart money says Bush will do the same. The three Bush-Simon fundraisers are closed to the press, and there is no sign yet that the two men will appear in public together. For Bush, it's a lose-lose situation. Bush can ditch Simon and risk the appearance that the Republicans are abandoning California, or Bush can appear with Simon, invite all the comparisons he would like to avoid -- sons of famous Republican fathers, "successful" businessmen dogged by allegations of corporate shenanigans -- and in the process give up whatever credibility is left in his tough talk on corporate fraud.

Whatever Bush ends up doing this week, Simon must know that his days of support from the White House may be numbered. The Republican National Committee is watching California closely now. If polling reveals that Simon's candidacy cannot be saved, don't expect to see Bush in the state again.

It wasn't supposed to be this way. Although California is typically kind to sitting governors -- it hasn't denied one a second term in 60 years -- Davis seemed beatable in the weeks leading up to the Republican primary. The energy crisis was still fresh in the minds of the electorate, the once vibrant state economy had gone south in the dot.com bust, and -- while more evidence would come later in a scandal involving Oracle -- allegations that Davis had traded political favors for campaign contributions were beginning to gain traction with voters. Then there were the intangibles. Under a pompadour of white hair that seems somehow otherworldly, Davis comes across as bloodless and petty, both stiff and slick at the same time.

"You take Bill Clinton, subtract the charm, the libido and about 20 points of IQ, and you get Gray Davis," says Jack Pitney, a professor of government at California's Claremont McKenna College. "Davis represents all of the things that people didn't like about Bill Clinton, and nothing that they did."

With Davis' approval ratings sinking below 50 percent, Republicans saw a chance to reclaim the governorship they had held -- with the exception of Jerry Brown's tenure in the late '70s and early '80s -- since Ronald Reagan took office in 1967. Karl Rove and the Bush White House saw something even bigger: a chance to bring California back into the Republican fold by exposing the state to a candidate who represented the inclusive, big-tent wing of the Republican Party.

That candidate wasn't Bill Simon. It was Richard Riordan, the outgoing mayor of Los Angeles whose professed pro-choice views put him in line with California voters. At Bush's urging, Riordan entered the race for the Republican nomination and instantly surged to a huge -- and seemingly insurmountable -- lead over his lesser known rivals.

But then two things happened: Riordan started running against Gray Davis, and Davis started running against Riordan. For Riordan, it was a mistake; for Davis, it was what now appears to be the shrewdest of political ploys. With the support of the White House and astronomical early polling numbers, Riordan approached the primary campaign with his eyes locked on the general election. He barnstormed the state talking up his moderate credentials on abortion and gay rights, sometimes even getting himself to the left of Davis.

Davis, knowing that a moderate like Riordan would give him a real challenge in November, invested $10 million in TV ads attacking Riordan during the run-up to the primary. Initially, the beneficiary of Davis' attack was Bill Simon, who captured the hearts of the Republican right and pulled off a come-from-behind victory in the primary. Now that the Simon campaign is in shambles -- last week, Simon laid off half his campaign staff -- the ultimate beneficiary of the Davis plan is likely to be Davis himself.

Today, Davis campaign manager Garry South crows that the Republicans bought a "pig in the poke" when they nominated the untested and unvetted Simon. When reminded that Davis did his best to make the sale, South snaps back: "All I can tell you is, in the political marketplace, caveat emptor."

With a virtually unlimited budget for TV ads and an opposition candidate who is stumbling through scandals when he needs to be introducing himself to the voters, South is confident that Davis will cruise to an easy win in November. Barring a major Davis scandal, Pitney agrees. And given the general public distrust of Davis, the scandal would have to be a big one. The public, Pitney says, is "vaccinated" against anything less.

The Simonistas put on a brave face. They acknowledge that Simon has had a run of bad luck and that he has handled it badly. After weeks of editorial abuse for refusing to make his tax returns public, Simon finally allowed reporters to view the returns for such a short period of time that any sort of meaningful analysis was impossible. It was hard not to think that Simon had something to hide. And inexplicably, Simon apparently did hide the existence of the fraud case from his Republican brethren until the day the verdict came down. When the news struck, the GOP establishment was caught flat footed and slack jawed. With no advance briefing about the case, no one knew enough to spin the unhappy result.

Still, Simon supporters are optimistic that Bush's visit this week will shift the focus away from their candidate's business foibles. Then, they say, Simon must seize the opening to show that he's a family man who cares about education, that he's "not scary" on environmental issues, and that his business acumen -- such as it is --gives him the "core competence" to govern the state. But even if Simon can't distinguish himself in the coming weeks, his supporters say Davis is so unpopular that their man still has shot at winning.

"You don't always have to get people into the ballot box to pull the lever for your candidate," says Sean Walsh, a Republican strategist advising the Simon campaign. "You can educate the public enough about Gray Davis so that they (a) will not pull the lever for him, or (b) will not go to the ballot box at all because they're disgusted with the Democratic side of the ticket."

It may not be all that seemly for a campaign to push publicly for a low voter turnout, and it's particularly ironic when the candidate himself has acknowledged -- as Simon has -- that he failed to vote in several recent elections. But for Bill Simon and his supporters in the Anybody but Gray crowd, it may be all they have left.