A Florida university is stepping up efforts to sack faculty member Sami Al-Arian, accusing him of terrorist ties. Critics say the charges are specious -- and a threat to academic freedom. 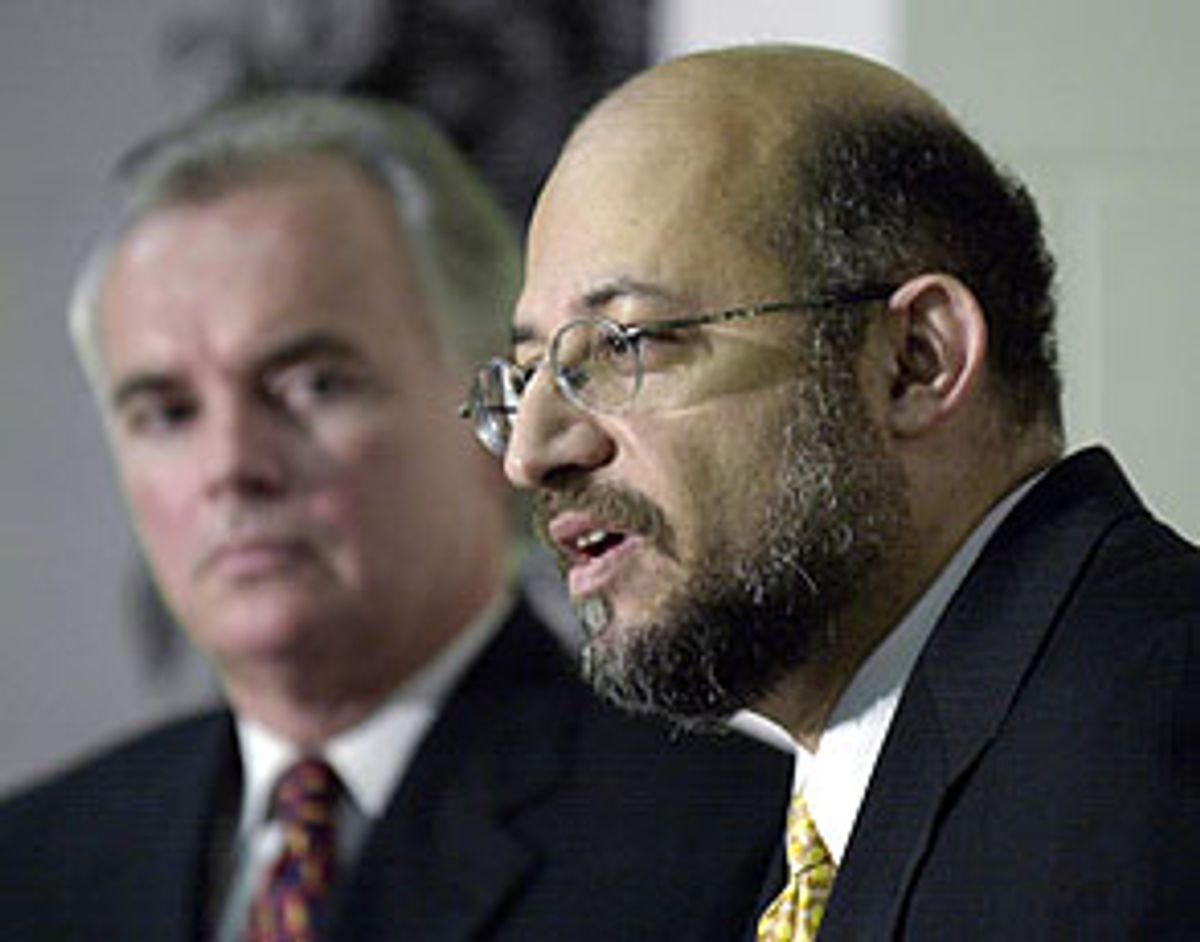 The saga of Sami Al-Arian, the tenured University of South Florida professor accused of having terrorist ties, took another surprising turn Wednesday when the university's president, Judy Genshaft, announced that the university would ask a circuit court to decide if the school could fire him. The university also went on record for the first time in insisting that Al-Arian's alleged terrorist ties, along with an anti-Israel remark he made at a pro-Palestinian conference 14 years ago, made him unfit to teach at USF.

"I believe that Dr. Al-Arian has abused his position at the university and is using academic freedom as a shield to cover improper activities," said Genshaft at a press conference.

Genshaft's action fell short of the expected move to fire Al-Arian outright, but it raises new questions. One legal scholar says USF's request that a state court bless its decision to fire somebody -- in advance -- is unprecedented. "I've never seen anything like it," says David Cole, professor of constitutional law at the Georgetown University Law Center in Washington. Cole doubts the Florida court will accept USF's invitation to become involved in the controversy.

One USF faculty member critical of the move suggests USF's strategy highlights the weakness of the school's case against the tenured computer-science professor. "This is just another stalling technique to keep him in limbo," says English professor Mary Jane Tyson, recent president of the university's faculty senate. "They want somebody else to tell them what to do. But eventually it'll end up in Al-Arian's favor. The only question is how long it will drag on."

Genshaft did not field questions from reporters on Wednesday and calls to USF's media relations office were not returned. Al-Arian's attorney, Robert McKee, said he was "disappointed" by Genshaft's decision to expand the case against the professor and that the new charges were "without merit."

In its amended grievance against the professor, USF claims the Kuwaiti-born professor used the university's name in booking a 1991 conference at which "money was raised for causes later associated with terrorist activities." At the time, Al-Arian was an organizer of World and Islam Studies Enterprises, a Middle Eastern affairs think tank affiliated with USF. The university now also claims that a decade ago Al-Arian used the think tank to bring terrorists into America.

Those allegations were first aired in 1995 when a think-tank scholar returned to the Middle East and soon emerged as the head of the Palestinian Islamic Jihad, a radical group that has engaged in many acts of terrorism against Israelis. Al-Arian has long denied having any terrorist links, and says he was shocked to discover that his colleague was a terrorist. In 1996, USF itself conducted an investigation into World and Islam Studies Enterprises that concluded there was no evidence to support charges of terrorist activity. The university now claims it did not have all the information necessary then to prove Al-Arian's terrorist links. And in 2000, a judge addressed the charges and found there was "no evidence" to suggest WISE was a front for militant Palestinian terrorist groups.

This summer, however, the FBI took the unusual step of publicly confirming the existence of an ongoing inquiry into Al-Arian. And last month, when asked why USF was trying to dismiss Al-Arian, USF board of trustees chairman Richard Beard, a real estate advisor by trade, told the St. Petersburg Times point blank: "The real reason is he's a terrorist."

The 1996 controversy faded, but Al-Arian reentered the spotlight last September when his appearance on Fox News' "O'Reilly Factor" generated intense negative publicity, including death threats on campus. That's because host Bill O'Reilly, suggesting that the CIA should trail Al-Arian around the clock, revisited the 1996 accusations about the think tank's terrorist links. In order to calm a campus on edge after the Sept. 11 attacks, Al-Arian agreed to go on paid leave.

Then, during an emergency meeting called last December, where Al-Arian was not allowed to defend himself, USF's board of trustees voted 12 to 1 to recommend that Genshaft fire the professor. Patrick Swygert, president of Howard University and the only USF trustee with an academic background, was the lone dissenting vote.

The trustees' rationale: By going on "The O'Reilly Factor" Al-Arian had created an unsafe campus environment; further, though he was identified on the program as a USF professor, he did not point out to viewers that his opinions were not those of the university's administration. Genshaft announced that by August she would make a final decision on whether to fire Al-Arian.

On Wednesday, though, a newly released letter from Genshaft to Al-Arian said the case is not so much about Al-Arian's failure to properly identify himself during a television appearance, but about his alleged terrorist activities -- along with the fact that he'd advocated "Death to Israel" at the 1988 conference.

Academic and free-speech advocates suggest the university, by embracing charges of terrorism and downplaying the idea that Al-Arian's TV appearance created a disturbance, conceded the weakness of its original case. "It would have been insane for them to proceed on the ridiculous grounds they wanted," says Thor Halvorssen, executive director of the Foundation for Individual Rights in Education. "That's a slam-dunk First Amendment case." The foundation takes no stand on the issue of possible terrorist ties, but is supporting Al-Arian's case against USF.

Had Genshaft fired Al-Arian yesterday, Halvorssen said, "it would be the epitaph of her career. She'd go down in higher education history as one of the biggest administrative threats to academic freedom." He adds that USF's decision to seek an open hearing in court represents a "good step in the right direction."

The university has come under sustained attack, both on and off campus, for threatening to fire the professor. To date, USF's graduate assistants, faculty union, faculty senate and college of arts and sciences chairpersons have all voted to support Al-Arian in his fight with USF. The school's student senate passed a resolution in support of Genshaft's decision to remove Al-Arian.

Meanwhile, the American Federation of Teachers expressed its concern about firing Al-Arian in a July letter to Genshaft. Perhaps most daunting for USF, though, is that the American Association of University Professors has signaled that it will censure the university if it fires Al-Arian. Censure by the AAUP is considered a black eye in academia and can have serious ramifications in recruiting and retaining top professionals.

The president does have defenders on campus who insist Al-Arian's behavior led to an unsafe campus environment. "The university president's duty first and foremost is to ensure safety on the campus," says Marion Becker, vice president of USF's faculty senate. She says she would "absolutely" support the decision to fire the professor. "And Dr. Al-Arian continued to say things that disturb many people and participated in the disruption. He has really hurt the university in terms of image nationally."

Several pointed ironies arise from USF's action on Wednesday. The first is that in the immediate wake of Al-Arian's appearance on "The O'Reilly Factor," the university, seeking to downplay the story, dismissed the televised accusations as nothing more than speculation. Yet in Genshaft's letter to Al-Arian released yesterday, USF is now echoing the same sort of terrorism charges O'Reilly made last year.

Second, during USF's emergency meeting last December, Genshaft urged the board of trustees to take action because "an extraordinary amount of the university's resources are being diverted into this situation." That was nine months ago, but the trustees' decision that day has only prolonged the controversy and diverted more of the university's time, attention and money. Today, few observers think the conflict will resolved by year's end.