With this ring, I abscond

In my head, I know the diamond goes back when the engagement is broken. In my heart, I want revenge. 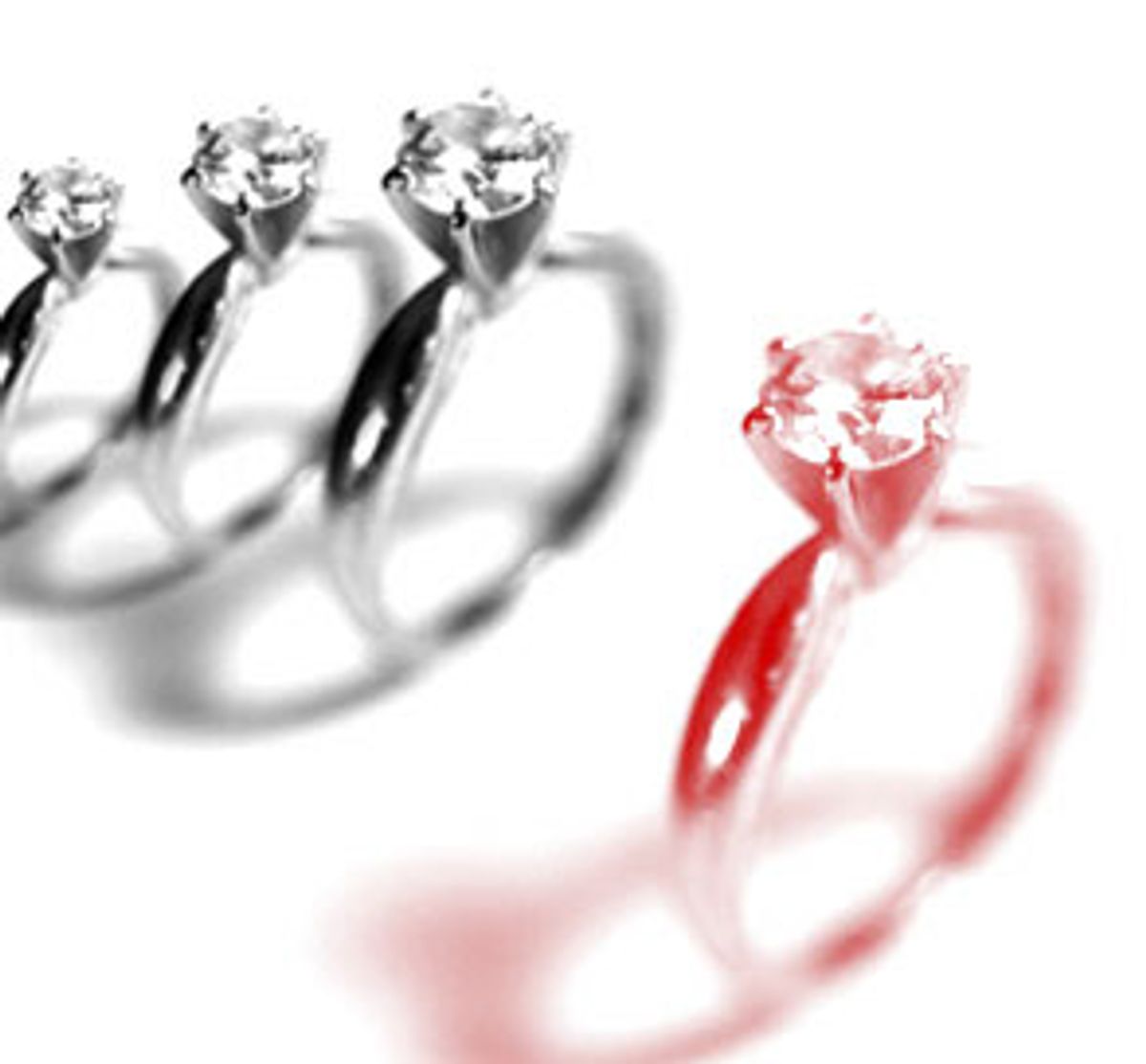 I've kept the engagement ring from the last man I didn't marry.

It isn't something I planned. In fact, it was the last thing on my mind as I drove away from him on a harrowing May midnight. At that point it was stashed with my passport and favorite CDs, and I was only wondering if my sister really was willing to put me up for a while. But in the days that followed, as I bulleted out of L.A., I admit I dreamed of selling it to fund my return to New York. Or to buy myself a really good watch. Or to donate to a woman's shelter. (This fellow was from the occasionally aggressive line of fiancés. Not recommended.)

And in the wee Pepsi-and-Hershey's hours, I remembered old Aunt Helen, who pulled me and my sister aside at family dinners to hiss, "Get jewelry!" We were initially puzzled. "From mom?" She'd roll her eyes in despair, but kept up her campaign.

Sadly, I mostly got books from my men. My first two loves proffered heavy feminist tomes. (Yes, I turned out to be a writer, but gee.) Subsequent beaus migrated to novels and poetry, but it all added up to a lot of homework. As for my fiancé, the only thing he knew about feminists was the old light-bulb joke. (Q: How many feminists does it take to screw in a light bulb? A: That's not funny.) I liked it -- no surprise, since I told it first. All his friends had wives that were dripping with ice. Once, when his boring company was bought by a larger, even more boring company, he gave me a lovely pearl necklace. Aunt Helen would be relieved at last.

Sitting in my sister's Houston driveway, exhausted from the trip, I fished out the ring. I didn't want it -- that was definite. I knew the rules -- I went to girls' school, as had my mother and her mother, and so I'd heard that the woman returns the ring when breaking off the engagement. And I knew him, knew he'd turn his monstrous, occasionally charming determination, famous for outbidding competitors and getting us bumped to first class, on this very ring if he had an inkling I was keeping it from him. He'd call my sister, my brother, friends across the country. He'd plead his case to my despised relatives. He'd probably win.

I locked the ring in the glove compartment.

All along, he'd had it all. For five years he had more friends, more invitations, more personality and lots more money. To add insult to injury, he was better looking. As a quasi-serious quasi-feminist, I struggled not to care about such trifles. Upon moving in with him, I cosigned on a joint checking account into which we put a fixed and equal monthly sum for household expenses -- normal ones like groceries and electricity; and abnormal ones, like the little guy who came to wash the cars Sunday mornings, and pool men. (I got to like the pool men. Got to see why housewives might have a go with them.)

The exceptions to our 50-50 split were telling. He covered the mortgage on his overlarge Santa Monica house and paid for our dinners out, while I bought the filtered water. (He had an inexplicable moral-political stance against delivered water.) The problems arose when I tried to keep pace with him -- a first-class world traveler with 40 designer suits. A real live captain of industry. I'd undergo spasms of greed, rush to Saks, and return home with an $800 purse I'd had to charge and wouldn't use. When I finally bought an Armani suit it was at the right price -- Christmas sale-- but the wrong time -- post-flu. I'll never be so thin again.

It was grand to finally have something he wanted. I drove to New York and found my own beautiful one-bedroom with a view. Hired a lawyer so I'd never have to talk to him again.

"Lawyer!" cried my sister. "You never even decided between church and synagogue!"

True, but there was a small condo we'd bought together in a mad moment and I didn't have a clue how to sell my part of it. Given the property values at the time, the $5,000 retainer didn't faze me -- until his lawyer started mentioning the ring in letters to my lawyer. My ex-fiancé wouldn't buy me out until I'd returned the ring. Soon that's all my lawyer talked about. At lawyer prices.

In the fall, his lawyer called my lawyer and said it is against the law for a woman to keep the engagement ring if she isn't going to marry. Breach of contract.

The law! Hell. I capitulated immediately.

But before I could unearth it from the glove compartment, my lawyer did some research and said that in California, an engagement ring was an ordinary gift, and could be kept like any gift. Secretly sighing relief, I denounced the sexist code that makes women chattel and forces us to return rings, which only symbolize patriarchal possession anyway.

By November, condo negotiations were still stalled and my lawyer hated him so much that I didn't have to. I had my first real crisis of conscience. I'd left the guy high and dry: Even if he'd never loved me, he was awfully humiliated by my midnight exit. Let him have the lousy ring. When he surprised me with a non-rancorous phone call, I confessed I wanted to return it. I believe I began crying. I may even have said I was sorry it didn't work out.

Perhaps I was remembering the time he met me at an airport gate. Or how he was wildly kind to my late mother. Or the day he finally gave me the ring. He'd arranged for a private viewing of Stonehenge, just at sunset. He had no interest in Stonehenge, that was for me. I had an idea of what was to come -- he could never keep a secret, and the gnarled old guard at the gate chucked him on the arm as we entered.

It was freezing and raining, Salisbury in December, and we strolled among those stones, alone in the mile-high gradations of gray and silver and -- wasn't it? -- magic. Then I happened upon the ring, glittering, as diamonds do. We laughed and laughed, even jumped up and down like a couple of kids among the monster stones. It had taken us both so long to get there, in so many ways.

Hock? The word dried my tears. It reminded me of the great gap between us, and how I'd pretended it didn't matter, but of how it had mattered, every day. It was why I owned half a California condo in the first place.

When my mother died, I faithfully continued a gravity-defying effort to be equitable, using the small inheritance I received to split the down payment on the condo. Immediately afterward, we moved to Europe, traveling like a jet-set Bonnie and Clyde, spoiled and extra irritable -- I'm no prize to live with either -- occasionally hopping up and down, bursting with delight at the absurdity of us in a pyramid, the Taj Mahal, Havana's Hotel National. Ours was less love story than slapstick globetrotting.

I paid my way to India, Cuba, London, and Texas (he sprang for Cairo), though I am a writer barely at subsistence level and he was a captain of ... some industry. In the end, our split required a cross-country move, a lawyer, the repurchase of desks, lamps, a bed. I'd had those things, once, but I'd given them to our cleaning lady.

Don't hock the ring, indeed. Did he suppose I'd wear it? I advanced to sell-and-be-damned mode. To hell with Emily Post! Aunt Helen rules!

In March, my ex did finally buy me out of the L.A. condo at half value. This was generous, since Santa Monica real estate had jumped since we bought the place and I'd made only one mortgage payment. I noted in a diary that this would be the perfect time to return the ring. Selling it seemed a tad vulture-ish. Keeping it, a bit Miss-Havisham.

Yet the ring remained in the glove compartment.

In the interests of full disclosure, there's one other small matter. I'm well into my 30s. The chances of my having gotten this chip of South Africa are roughly those of a terrorist bomb landing in my apartment. This is not considering the one in 10 trillion chance of my glimpsing a second such ring. (Actually, two planes commandeered by terrorists crashed a half-mile from my apartment last September, but I can't figure out what that does for my odds.) Shouldn't I profit from this freak occurrence? Shouldn't I have a great piece of jewelry, one I can pass on to my, er, nieces?

Of course, I've had no idea what the thing was worth. So recently, I pulled the ring from the glove compartment and brought it to a diamond dealer. An old friend -- introduced by the fellow who gave me Merlin Stone's "When God Was a Woman" for Christmas ages ago -- he knew the whole sordid tale. In his shop, I handed it over in mock ceremony. "Well?"

He pulled out his loupe with a flourish. "Pretty nice quality, though I can't believe he gave a grown woman such a small rock."

"Jeweler standards are not the world's, my dear." (No one can make me feel bad -- I am a woman who Got Jewelry.)

"Hrrmph." He lowered the fluorescent lamp, leaning close to the booty. I started making plans: half toward my VISA bill, and a ruby ring with the other half. Or all to a poetry foundation -- that would flummox him.

Finally my friend looked up. "You know what you should do with it?"

I held my breath, awaiting the magic number.

He slid it across the table. "Bring it right to the post office."

Alexis Quinlan is a writer and teacher in New York. Her stories have appeared in Self, Texas Monthly,and The London Times Sunday Magazine, among others. Her "Letters from the Front (Street)" -- a series of emails to friends concerning the Wall Street-Seaport area from 9/11/01 to 1/1/02 -- will appear in NYCBigCityLit this September.