A wall of hostility

More than 200,000 Palestinians live in East Jerusalem and share many of Israel's freedoms. But the arrest of a Hamas cell there has exposed a deep, angry divide. 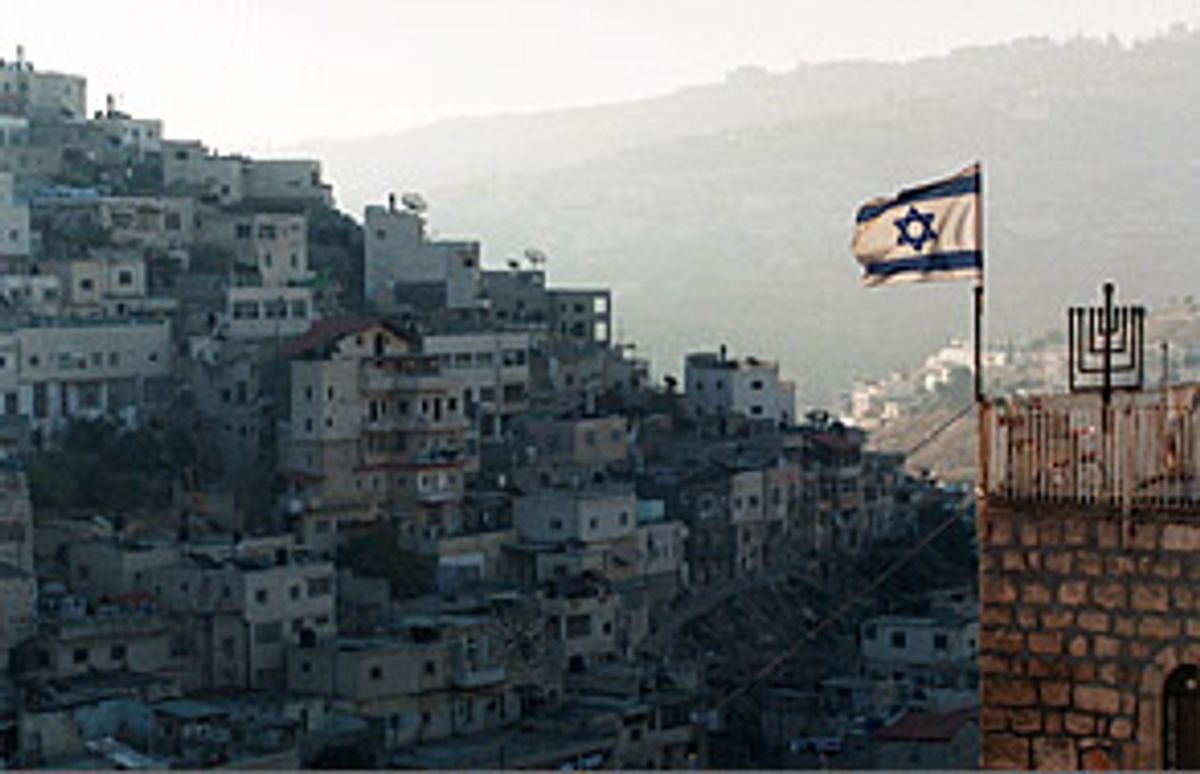 A dusty dirt road flanked by heaps of rotting garbage, no street lights, no pay phones -- this is Silwan, a largely Arab neighborhood in East Jerusalem. "You call this Jerusalem?" scoffs Abu Murad, a 57-year-old retired policeman. "This is not Jerusalem, this is Africa. No, that's an insult for Africa." Murad is seated in front of a bakery, talking to a friend, and he angrily gestures to the neighborhood around him. "Look at this! We pay taxes and we get nothing in return. Is it any wonder people here are fed up?"

Silwan sprang uneasily to prominence in Israel this week after security officials arrested five people -- three of them from the neighborhood -- identified as members of the militant Islamic group Hamas; they were accused of involvement in the bombing at Hebrew University that killed nine people. For years, Israelis assumed that Palestians in East Jerusalem were content to be there, with a freedom to move and work throughout Israel, and the Arab residents had remained largely aloof of the intifada in the West Bank and Gaza. But the arrests have broken that illusion and replaced it with a new awareness that the Palestinians' grievances make Jerusalem a tense, divided city.

"This is going to be very bad for all of us," says Murad.

Already, right-wing members of Israel's broad-based coalition cabinet have announced they want to strip the suspects of their residency rights in Jerusalem and demolish their families' houses. The right-leaning English-language Israeli daily, the Jerusalem Post, typified the official attitude toward East Jerusalem's Palestinians in a sour editorial: "For too long now, Arab Jerusalemites have been content with playing a double game. They have availed themselves of the civic and economic opportunities that a unified city, under Israeli sovereignty, affords them, and which has saved them from the despotism, corruption and indigence under which their cousins in Ramallah and elsewhere in the Palestinian Authority suffer."

Israel annexed the eastern part of Jerusalem and greatly extended the municipal boundaries after it conquered the West Bank during the Six-Day War of 1967. The Palestinian residents of the city have Israeli identity cards that set them apart from the people of the West Bank and they drive cars with Israeli rather than Palestinian plates. Israel takes great pains to emphasize the unity of the city that it still calls its "eternal united capital," despite discussions during the last, doomed rounds of peace talks to divide the city between the two peoples. Jerusalem is regarded as one of the main stumbling blocks in achieving a peace.

But the arrests of the Hamas members and the announcement that they were responsible for a string of attacks in Israel in which 35 people died have clearly chilled Israeli interest in such a compromise.

After the arrests Jerusalem's right-wing mayor, Ehud Olmert, emphatically denounced the idea of dividing the city. "Even to talk about it at this point is playing into the hand of the extremists," he said. "They carry out these attacks exactly with this in mind." He also said that he had been afraid for a long time that the situation in East Jerusalem was not as calm as it seemed, and while he warned against overreacting, he said more difficult times might lie ahead. "This will raise the level of suspicion and raise the sensitivity of security forces to check, to stop, to investigate people that in many cases will be innocent ... because we can't take too many risks," he said.

Former mayor Teddy Kollek, a liberal who oversaw the reunification of Jerusalem after 1967, had different advice. Israel has no option but to share the city with the Palestinians, he said, however painful that may be. "I think that we have to reach a deal ... As part of the arrangement, something must be given to them," said Kollek, now 91. "They have been sitting here for so many years and feel that it is theirs."

But for some of the 200,000 Palestinian residents of Jerusalem, the city has been united in name only. Many feel they are as occupied as the people in the West Bank and Gaza. The overwhelming majority does not have citizenship and hence no voting rights in national elections; East Jerusalem Palestinians can vote only in local elections, but most refuse to do so because they regard it as a recognition of Israel's annexation. That explains how the right-winger Olmert is mayor in a city that officially has a population more than 30 percent Palestinian. And that's why the Jerusalem Post blames many of the discrepancies between East and West on the Palestinians themselves. "It is difficult to feel sympathy for those who complain about being treated wretchedly by municipal authorities while refusing to participate in municipal politics," the Post stated. "Civic advancement requires civic involvement. If Arab Jerusalemites genuinely wish to improve their lot, they have an obligation to play ball with the state."

Many of East Jerusalem's Palestinian residents work in the western, predominantly Jewish, part of the city or elsewhere in Israel. The checkpoints that prevent West Bank Palestinians from entering Israel are mostly placed outside the Greater Jerusalem city limits. East Jerusalemites also receive social and other benefits through the state, but they do not hold an Israeli passport. Still, their economic situation in particular is much better than that of the people on the West Bank, and Israel had hoped that this would prevent them from joining the intifada.

The intifada, however, has had a strong impact on the views of the people in East Jerusalem, says Imad Muna, the owner of a bookshop in East Jerusalem's main thoroughfare, Sallah Eddin street, which is paved and well lit. "When we saw how Arafat and his men were running the West Bank and Gaza, many of us here did not have any desire to be part of that," Muna explained. "Maybe there was even a majority that wanted to stay with Israel. But now, after having seen what the Israelis did during this intifada, the destruction, the killing and the very harsh measures, we don't want anything to with them anymore. We hate them."

Muna and others say that, especially since the intifada, the division of Jerusalem is evident every day, in ways dramatic and subtle. While some Jewish taxi drivers will not enter East Jerusalem, most West Jerusalem taxi companies have fired their Palestinian drivers. "When somebody sends me a lorry load of books from Tel Aviv," Muna says, "the driver phones me from West Jerusalem and tells me to come and get them from there. They are too scared to come here." Most of the Jewish residents of West Jerusalem avoid the Palestinian districts even more since start of the intifada.

As for going to West Jerusalem himself: "The police somehow can always tell we are Palestinians. I always get stopped and checked. I understand why they do that, because of all the suicide bombs going off there, but still. Nowadays, it's easier to be in Tel Aviv, where there are fewer checks, than to be in West Jerusalem."

Nabil Feidy, a money changer further down Sallah Eddin street toward the Old City walls, complains bitterly even about the perceived economic advantages of being an East Jerusalem resident. "Nobody comes here anymore: no tourists, no Israelis," Feidy says. "We are cut off from our natural source of income -- the people from the West Bank. Even so, we have to continue to pay very high municipal taxes for which we don't get much in return." And Feidy chafes at the restrictions he says Israel imposes on the Palestinian residents. "There is a roadblock that divides the neighborhood where I live," he explains. "On both sides it's Jerusalem and I have the Jerusalem I.D., but in the morning it often takes me more than an hour to come to my work because of the checks. It used to be a 10-minute drive."

There are many other complaints on the part of Jerusalem's Palestinian residents. The municipality regularly demolishes houses in the eastern part of town because they have been built without a license. The Palestinians say they have no choice but to build without a license because the municipality rarely issues them. Imad Muna says that he has been trying for two years to get a building permit. He has spent a lot of money and hopes he is close to getting it, but he is still not sure. "They want us out," he says flatly. "That is why they do those things." He also bristles at the Israeli practice of revoking the residence permits for East Jerusalemites who left the city for the West Bank or who went abroad for longer periods. Often it meant that they could not come back to Israel at all because they did not have Israeli passports. Lately the authorities have been somewhat more flexible. "Everybody who could moved back into town in order not to lose their rights," explains Muna.

Apart from the shock and the indignation, the arrests of the East Jerusalem residents has caused Israelis to examine what went wrong. Commentator Daniel Ben Simon in the Ha'aretz daily newspaper points at yet another reason for the residents of Arab neighborhoods to be dissatisfied. "Israeli governments have been so eager to extend their control over the eastern part of the city that they found themselves expropriating land and neighborhoods and buildings to house yeshivas and other spiritual institutions," Ben Simon wrote. "This came at a high price to the residents who found themselves living in a city that had become divided with a wall in its midst -- a wall of hatred and hostility ... As the Jews expropriated land, the enmity on the other side grew."

Palestinian journalist Daoud Kuttab has observed life in East Jerusalem for many years, even writing a column on it for the Jordanian newspaper Jordan Times. He too says that most residents of the city identify with the Palestinians in the West Bank and Gaza. Still, he credits the economic situation with keeping things relatively calm. "Many people here are only interested in their pocketbook," Kuttab explains, "and nobody wants the situation to deteriorate to the point where it is on the West Bank." And yet he is not surprised that a Hamas cell might have been operating in the city. With strong commercial interests among Palestinians here, he says, nationalism is less important in their culture, but, he notes: "The religious element is much stronger in the political life of the city, because of the presence of the holy places."

Kuttab is clear about the effect the occupation has on the people of Jerusalem, even though they are materially better off than their brethren in the West Bank. Put simply, it depresses them. "Just go to Bethlehem now that it is under Palestinian control again, or to Ramallah before the intifada. People go out, there is life, people feel comfortable in the streets even at night," he says. "Jerusalem, on the other hand, is dead."