Gerhard Schroeder was seen as Germany's Bill Clinton -- media wise, progressive and practical. Today, mired in an enigmatic reelection campaign, only his wife defends him. 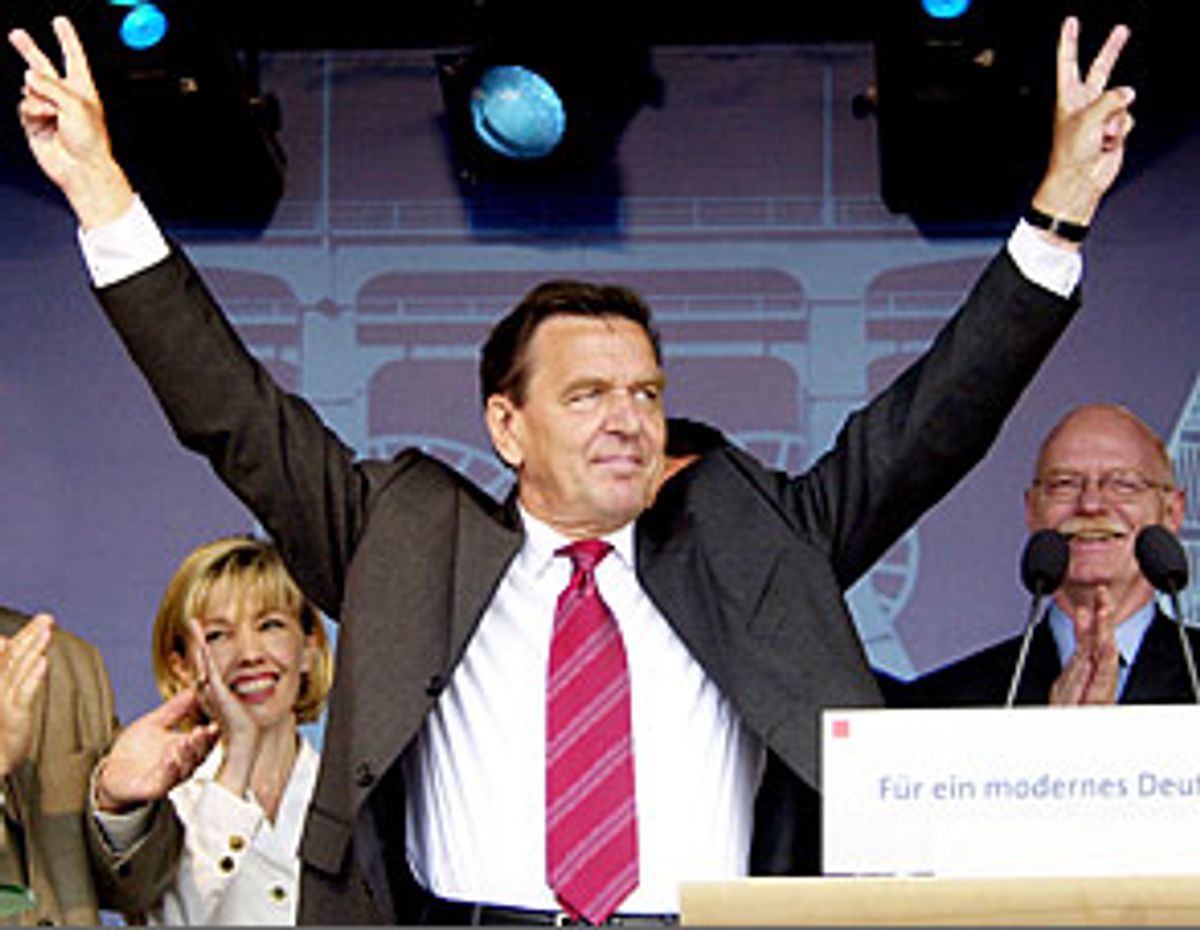 Facing the highest rates of unemployment in three years, German chancellor Gerhard Schroeder recruited longtime friend Peter Hartz, Volkswagen's personnel manager, to chair a committee that would look for solutions. That was in February. Ten days ago, the two men appeared before an invitation-only crowd of 700 at the Bundestag, Germany's parliament, bearing the result of that labor.

It was a bound report, 5 inches thick, and Hartz waved it proudly before the audience. "This means 2 million jobs over the next three years -- starting now!" he announced.

Schroeder's eyes brightened underneath his unruly eyebrows and a half-smile crept over his face.

Of course, the chancellor had every reason to be happy about Hartz's promise. Nearly 4 million Germans -- 10 percent of the workforce -- are jobless. Most of them live in the east, an influential voting bloc Schroeder has been struggling to woo with the Sept. 22 national elections a month away. It was Schroeder who said in 1998 -- when unemployment was only slightly worse -- that he didn't deserve to be reelected if he didn't bring more jobs to Germany. There's no doubt that the sore subject is the reason Bavarian prime minister Edmund Stoiber, whose constituents are enjoying a high-tech boom and one of the lowest unemployment rates in the country, has consistently walloped the chancellor by 7 points in the polls.

Unfortunately for Schroeder, the Hartz report is as inviting to read as "The Iliad." Weighed down by layers and layers of numbers, and further obscured by impenetrable bureaucratic language, most voters probably wouldn't even try to read it -- and if they did, and in the unlikely event they could understand it, they probably wouldn't favor it. It increases rather than reduces the size of government by creating statewide headhunter-like agencies. It would force young and single people to move anywhere jobs are offered or face a reduction in welfare benefits. And it pledges billions of euros in low-interest loans without explaining where the money would come from and who would qualify for it.

The morass of the Hartz report is only the latest disappointment in the 58-year-old chancellor's reelection campaign -- an enigmatic effort that has often been darkly humorous, though unintentionally so. For more than a year, Schroeder's critics have charged that Social Democrat is not the media-friendly, charismatic Tony Blair-ite he sold himself as when he trounced Deutschland's four-term conservative, Helmut Kohl.

Indeed, the chancellor has struggled to catch a break all year. In January, he weathered family embarrassment when his 48-year-old sister, Ilse Bruke, a social worker and mother of two sons, organized a petition and sued her brother's administration for slashing tax benefits for single parents. This incident dredged up news from the previous year about Schroeder's unemployed half-brother, Lothar, who had surfaced complaining that there was no work -- just days after Schroeder had called those without a steady income "lazy." (Lothar is now a tour guide on the Spanish island of Majorca.)

In May, Schroeder gave Germans a reason to giggle when he proved his own lack of humor by successfully suing a German news agency for reporting that he dyed his hair. Public relations gaffes followed. Schroeder fired Rudolf Scharping after the defense minister admitted to taking $144,000 from a lobbyist with ties to the arms industry. Before leaving, Scharping questioned his boss's mental health. Schroeder, meanwhile, defended himself against allegations that his administration had pressured Deutsche Telekom's chief to resign, an event that triggered a slide in the price of its stock, upsetting small investors.

Twenty years her husband's junior, Kopf married Schroeder in 1998, giving up her 16-year career as a political journalist -- she at one time worked at Bild -- to cultivate a homemaker's image. But like Hillary Rodham Clinton, who famously insisted in 1992 that she has better things to do than stay home and bake cookies, Schroeder-Kopf told major papers that Bild had launched a "witch hunt" against her husband and were underplaying "negative" news about Stoiber. Bild denied that, but after Schroeder-Kopf got into print, the paper wrote about a few parliamentary right-wingers who'd abused their Lufthansa privileges.

Not yet satisfied, Schroeder-Kopf has begun logging campaign diaries on Schroeder's official Web site. Stoiber is "poisoning Germany's children" by supporting federally funded agriculture programs," she wrote in the first week of August. "As a mother and consumer, I never thought I'd hear  that German farms should be allowed to use more poison to spray their apples."

If anyone can and should defend Schroeder now, it's his wife. During the 1998 election, the Germans welcomed her even though the two began their affair before his third marriage had ended. During the 1998 election, the two even joked openly that he changed wives every 12 years, to which she quipped that he'd better find a strong fifth wife to push his wheelchair. But attitudes have changed, mainly because Stoiber, a stone-serious married man with three children, is running on a family-values platform.

Stoiber's camp hasn't hesitated to point to a new book by political journalist Jurgen Hogrefe, which reveals that most of Schroeder's $161,000 salary goes to pay alimony, forcing the chancellor to live cheaply. He sometimes drives himself to appointments in his VW and keeps two small flats in Berlin and Hanover, which together rent for less than $700 a month. For a long time, his thrifty living didn't bother Germans; they appreciated it. But when he confessed to Stern magazine last month that he dreamed of moving to New York City, where he could finally make some money writing his memoirs, voters grumbled.

If Schroeder has much fight left in him, it won't be wasted attacking Stoiber's neo-populist rhetoric, or portraying the Bavarian as a red-faced, beer-swilling provincial, a stereotype pundits say has made politicians from the region unappealing to northern voters.

Instead, it seems, he may rely on the heavens to avoid becoming the only chancellor in post-World War II history to not serve a second term. According to new public opinion polls, rampaging floods in Germany -- and Schroeder's quick response to them -- have helped him make a dramatic comeback to pull even with Stoiber. His visits to Dresden -- while Stoiber remained on vacation -- reminded voters of his working-class roots and his ability to be a man of action when the common folk are down. If he's able to get adequate financial relief from the European Union and other sources and distribute it efficiently, he might be able to benefit from the same kind of image makeover that the Sept. 11 terrorist attacks brought to New York mayor Rudy Giuliani.

But the floods aren't the World Trade Center, and Schroeder will have to own up to the problems that have plagued his reign. Sept. 22 might answer a front-page Aug. 21 Bild headline, run alongside a photo of the chancellor: "Why is it always the little people who have to pay?"