The blowhard next door

The boyish Sean Hannity seems poised to inherit Rush Limbaugh's mantle. And he isn't letting little things like facts get in his way to the top. 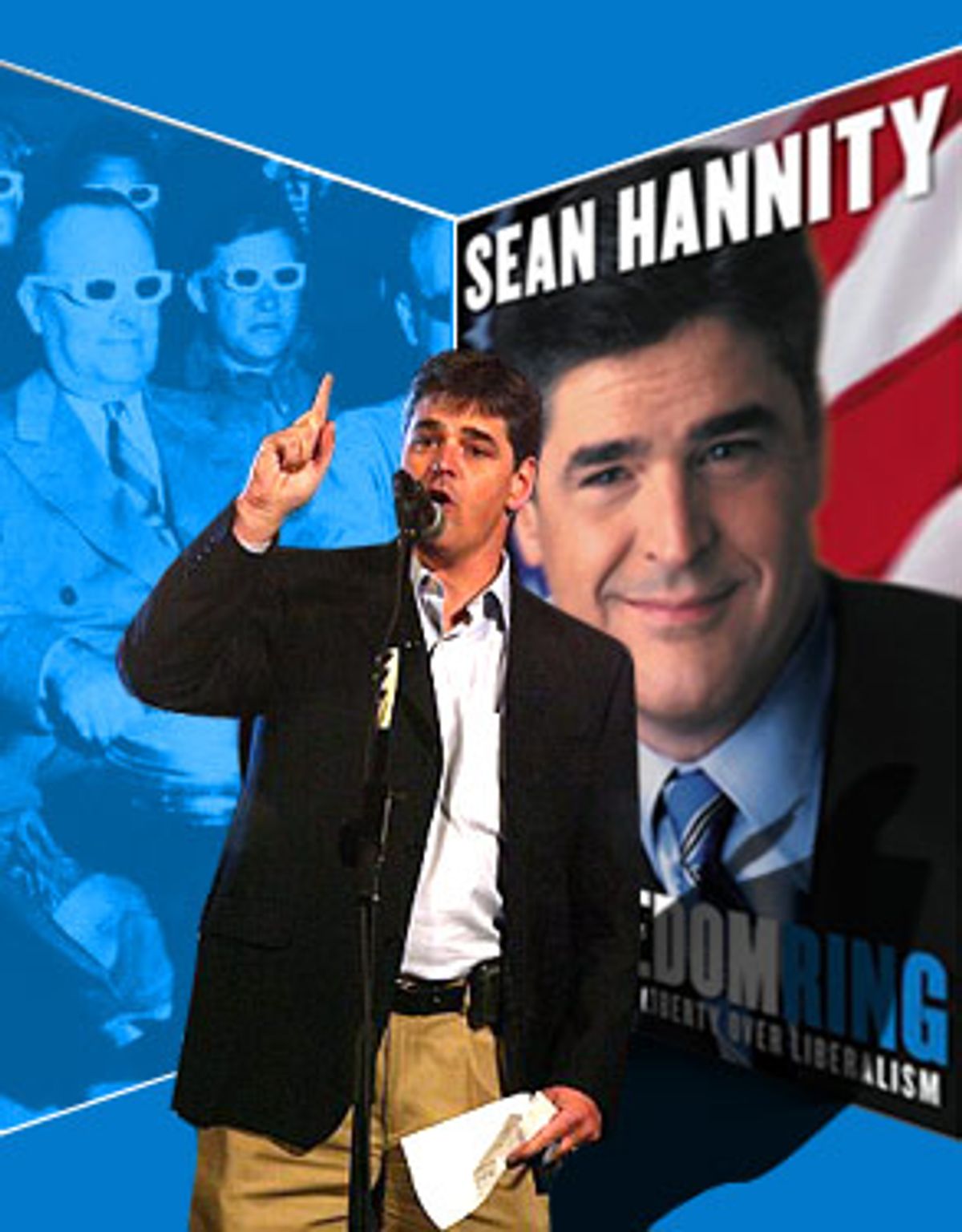 If you don't already know who Sean Hannity is, you will. If you are already familiar with the ubiquitous conservative pundit, prepare to see a lot more of him. The 40-year-old co-host of Fox News' "Hannity and Colmes" (as the conservative foil to liberal Alan Colmes) is a young, telegenic face in a graying-man's game. His show is already the third-highest cable news show, trailing only Fox's "O'Reilly Factor" and CNN's "Larry King Live." His radio show, which went into syndication late last year and airs in the crucial 3-to-6 p.m. "drive time" slot, draws 10 million listeners. And he seems poised to follow the gilded paths of Fox colleague Bill O'Reilly and, quite possibly, Rush Limbaugh, who has been the standard-bearing conservative spokesman for nearly two decades.

Eventually, Hannity will "be bigger than Limbaugh," Michael Harrison, the publisher of the radio industry's Talkers magazine, predicted to People magazine earlier this year. It's not difficult to see why. While no less partisan, Hannity's scrappy, boy-next-door delivery would seem to have a broader appeal than that of the more dour Limbaugh.

So now comes his next step. Following the multi-bestselling Limbaugh and O'Reilly, Hannity has decided to make the leap to print with his new book, "Let Freedom Ring." The climate, it appears, could not be better. Already this year, Ann Coulter's "Slander" and Michael Moore's "Stupid White Men" have been runaway No. 1 bestsellers, proving that ink on paper is one foolproof way to break out as a partisan pundit. And sure enough, Hannity's book, released just last week, has already made its way to the top of Amazon.com's nonfiction bestseller list.

But in "Let Freedom Ring," Hannity seems to be following another regrettable trend in modern punditry: Never let facts stand in the way of a good partisan screed. That was the dirty truth behind "Slander" and "Stupid White Men," and Hannity continues it with his book, a poorly researched effort full of blatant falsehoods and highly distorted versions of the truth.

Early in the book, Hannity grants that the "vast majority of liberals are good, sincere, well-meaning people. They love their kids. They love their neighbors. I am sure most love their country." The rest of "Let Freedom Ring," however, is devoted to attacking liberals as a threat against America. Indeed, Hannity frames a war against liberals as part and parcel of the war against terrorism: "The Left may be sincere, but they're sincerely wrong. And they must be challenged and defeated if we are to win this war on terror and preserve our way of life for this and future generations."

But Hannity's claims often stray into the realm of myth. He scores some points with his criticism of the outrageous rhetoric thrown by some liberal commentators, such as James Carville and Bob Herbert, but Hannity gets his facts wrong again and again, especially, and not surprisingly, when it comes to Democratic politicians.

Numerous lies abound, for instance, about former President Bill Clinton. Hannity cites an oft repeated lie that in a speech at Georgetown University, "Clinton seemingly blamed the vicious terrorist attacks on you and me and all Americans." Citing a passage from the speech in which Clinton noted that Europeans and Americans had engaged in atrocious acts in the past, such as the Crusades and slavery, Hannity says Clinton is providing a "justification for radical Islamic terrorism" and an "apology for terrorism." This criticism had a bold, but short-lived, life span last fall, when conservative critics leapt to attack Clinton based on a slanted article in the Washington Times before actually reading what he had said. The speech itself makes it clear that the former president didn't note these historical events to excuse the attacks of Sept. 11 but merely to illustrate that killing innocent noncombatants has a long history. Other conservatives who picked up this tick had the class to correct their attacks with the truth. Now, 10 months after this myth was corrected, truth doesn't seem to be much of a concern for Hannity.

"Let Freedom Ring" also accuses Clinton of "not effectively going after Osama Bin Laden" and suggests Clinton should have sent "a covert team over to the Middle East to take out Bin Laden." But Clinton, of course, did attempt to kill bin Laden with a cruise missile attack in 1998 and authorized several other overt and covert measures targeting the terrorist leader. He just failed. But such a claim could also be made thus far against President George W. Bush.

Without citing a reference, Hannity also states on the first page of his chapter on taxes that "the tax burden on American families is at a record high, having skyrocketed during the Clinton-Gore years." Hannity most likely arrived at this figure -- and this is a guess; footnotes are irregular and sometimes incomplete -- using deceptive calculations that simply divide total taxes collected by the government by the number of families. But the progressive nature of our income tax system means that the national tax burden is not evenly divided among families. Tax receipts naturally went up in the 1990s as the economy grew rapidly and more citizens were pushed into higher tax brackets. Yet a study from the left-leaning but well-respected Center on Budget and Policy Priorities found that the share of income paid in federal taxes by the middle 20 percent of families declined from 1995 to 2000, when it stood at its lowest level since 1979.

Hannity continues this faulty logic in repeating the canard spread by the Tax Foundation that, under Clinton, "tax freedom day" (the day when Americans have paid off their tax bill for the year) was pushed back from April 20 to May 1. Once again, this is a lazy use of averaging to make higher incomes (that is, more people moving into higher tax brackets) look like an increase in tax rates for average citizens.

In other cases, Hannity can't even interpret the data from his own sources correctly. In a discussion of President Ronald Reagan's economic policies, he claims that "had all of Reagan's budgets been adopted federal spending would have been 25 percent less on a cumulative basis." This statement is immediately followed by a chart, reproduced from a Web site that shows that the total difference between federal budgets enacted from 1982 through 1989 and those proposed by President Reagan was $197.3 billion, or 2.7 percent (the 25 percent number on the chart is based on a flawed method of compounding the difference between each year's budget).

When discussing Democratic opposition to Bush's tax cut, he accurately quotes House Minority Leader Dick Gephardt, D-Mo., who stated in April 2001 that "at a time when key indicators tell us that there is an economic slowdown, the president has sent a plan that ignores the needs of average Americans and provides a blueprint to fulfill a campaign promise to cut taxes first no matter what." Amazingly, Hannity follows this quote with an accusation: "Can you believe these statements? Not even the most liberal of economists will argue for tax increases during a recession."

Gephardt, however, didn't argue for a tax increase in that quote -- or in any others during the Bush tax-cut debate. This is a blatant distortion designed to equate opposition to Republican tax cuts with support for a tax increase. And in an attack that would certainly come as a shock to those who took part in the radical New Left movement of the '60s, Hannity devotes eight pages to his contention that Senate Majority Leader Tom Daschle is "a New Left Democrat" and "arguably the most ideologically intransigent New Left liberal to ever serve in the Senate leadership."

The New Left was, as Hannity himself admits earlier in the book, a radical movement that wanted to largely dismantle capitalism and the U.S. military. To back up his use of this label on Daschle, Hannity cites only a list of 10 votes over a 23-year career in which Daschle voted against increased defense spending and missile defense, against the Persian Gulf War, and for a nuclear freeze. One of the cuts Hannity cites Daschle voting for is a minuscule $329 million. Missing from the list, of course, are all of the defense budgets Daschle voted for, including this year's, which included nearly $30 billion in increased spending -- hardly the action of a New Left radical.

The lies continue in Hannity's chapter on the environment, where he focuses on the dispute over the Arctic National Wildlife Refuge. He states that the U.S. Geological Survey said ANWR could yield up to 16 billion barrels of oil. But in March a Washington Post reporter interviewed a geologist at the USGS who said the total was closer to 3.2 billion barrels. Even the highest estimate given by Sen. Frank Murkowski, R-Alaska, during the congressional debates was 10.2 billion barrels.

But then, Hannity is repeatedly at odds with reality in this chapter, stating that ANWR oil would make the United States "far less dependent on foreign oil" and noting Teamsters president Jimmy Hoffa Jr.'s assertion that drilling would create 735,000 jobs. A Miami Herald article citing data from the USGS, the Department of Energy and the Congressional Research Service, however, stated that, at its peak, ANWR would produce less than 5 percent of daily U.S. oil consumption and create between 60,000 and 130,000 new jobs. Yet Hannity, in typical style, uses these falsehoods to make the broad claim that "it is difficult to point to another issue in modern American history where a major political party's rhetoric is so divorced from reality."

Distortions and lies are par for the course throughout "Let Freedom Ring" because, without them, Hannity wouldn't be able to make the continual stream of over-the-top accusations against liberals: They "loathe and ravage so many of our core values and traditions"; they "told us global warming and gays in the military were top priorities, well above securing our nation"; and "after we defeat our last foreign enemy, we will still face threats to our freedom, largely from left-wing extremists in our own country."

On "Hannity and Colmes," Hannity often seems to roll over the timid Colmes with his bluster. When his words are frozen on the page, though, there is no disguising what they are: poorly argued propaganda.

With the 51-year-old Rush Limbaugh's profile fading, and only the 53-year-old Bill O'Reilly (who doesn't toe Limbaugh's conservative line nearly as well as Hannity) equaling him in popularity, Hannity seems on the brink of becoming America's leading conservative pundit. "Let Freedom Ring" is troubling evidence that Hannity won't let a little thing like truth get in the way of his rapid ascent.

Bryan Keefer is the co-editor of Spinsanity.