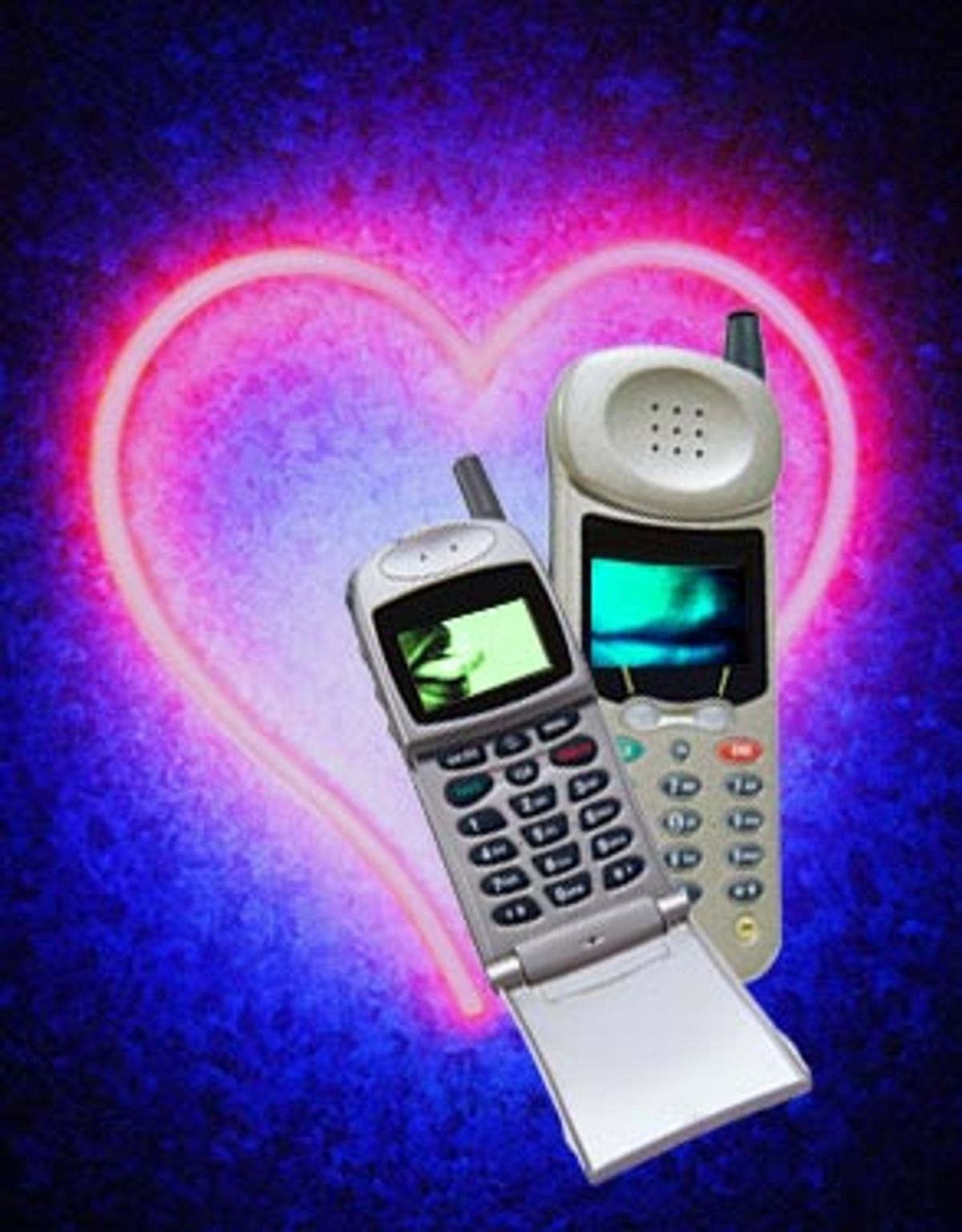 I was first introduced to the concept of cellphone sex a few months ago when my friend Isabelle asked if I would help her find a boyfriend on Match.com. Isabelle, an actress who's performed in musicals on Broadway, was insecure about writing a profile that would attract suitors, and she wanted me to come up with something that would stand out. She has a history of losing interest in men when it starts to get serious. About the time the guy can't get her out of his head, she starts to get claustrophobic.

I was skeptical that this scheme would end on a high note. But I was intrigued by the idea of taking part in some vicarious dating. I've been married for 16 years and my life can seem dull compared to Isabelle's. I often feel envious of her more daring sexual exploits.

So one evening Isabelle came over and we composed her profile. She didn't want to be identified as an actress. "You know what men think," she said. "Actress? Slut. No thank you." Since she does have a very seductive voice, we decided to emphasize her vocal attributes. "Smart, attractive soprano looking for handsome baritone for harmonic relationship. If you think we'd resonate, let's give this duet a try. Foreign accents welcome here."

Isabelle, who has very high standards, was disappointed when, after two days, only about 20 men responded to her (our) listing out of 160 hits. I, however, took great pleasure reading all the little missives from men who found me interesting and amusing. After a few e-mail exchanges that went nowhere, she was ready to give up. But I urged her to e-mail Bill, who had written, "Let my sweet nothings send chills down your spine."

"Why not? I would have thought you'd be all over him."

Isabelle is in her late 30s. I knew what she was driving at.

It was frustrating to know I could attract this good prospect and she wouldn't give him a chance.

A couple of weeks later, after no one better had turned up, Isabelle answered his ad. That's when she discovered he lived in Philadelphia.

"I'm not dating someone who lives in another city. He had no business answering my ad."

"What if he doesn't like me? After all, you're the one who wrote the profile. Maybe he'll think I'm boring."

"You want me to go in your place?" I challenged.

So Bill took the train in one Friday evening and the two of them went out for dinner. I was a little disappointed to hear they had a great time. "He was so cute!" she said. "At dinner, we couldn't stop talking. You wouldn't believe how much we have in common. And," she added, "he has a very sexy voice."

Isabelle kept me updated on the relationship. He traveled on business a lot, and it was hard for them to get together. When they did, they often had wonderful, intimate dinner conversations that led to fantastic sex. I couldn't help but wonder how much the fact that this was a long-distance relationship kept it alive.

"He talks dirty to me while I'm walking through midtown."

"Really?" I'd never heard of anyone doing this. It didn't seem conducive to a sensual encounter. "But don't you miss actually touching him?"

"I guess this brings new meaning to gutter language," I teased.

A few weeks later, they were still hitting it off. "I brought him to orgasm while I was walking through Bloomingdales," she told me with a sly grin. "No one was the wiser!"

I found myself, once again, feeling jealous of her audacious sex life and lack of inhibition. I've never been able to handle regular phone sex, much less cellphone sex. To me, it distills the act to the hardest part: saying stuff out loud and vocalizing sounds of pleasure. So cellphone sex seemed like the worst of both worlds: you're exposed, and it's in public! Of course, Isabelle makes her living by her voice, and she lives to emote. Like most writers, I've learned to show, not tell.

With the Internet making a "village" out of the whole world, though, it seems that many resourceful people now use cellphones to reach out and touch someone. Consider a young man I'll refer to as Cal Waiting. He uses sites like alternativeconnections.com, which, unlike Match.com, are pitched for scoring what he calls "cyberbooty." When he's in the mood, Cal finds a picture of someone who piques his imagination and sends an e-mail to convey his interest. Ideally, the recipient is logged on, and they can make a connection immediately. While Instant Messaging is one way to ease into the encounter, Cal says it's better if they can both connect via cellphone. (Cal does not have high-speed Internet access.) "The longer the online flirtation, the less likely it will be consummated in person," he tells me. "So one or both parties are probably ready to pop their cork as soon as they hear the other's voice."

Another advantage to using the cellphone, he points out, is you can shop around the site for other people even while getting to know your current "pic." Cal, who happens to be a really good-looking guy, accepts the fact that his partner may not be as gorgeous as the picture. This is virtual sex, after all. Why let reality interfere?

One thing comes in loud and clear: The art of using language is a neglected element of lovemaking. Humans worry so much about trying new positions, keeping up appearances, and learning techniques on how best to touch where and when -- they forget that words can be the best aphrodisiac. If Mae West, who had one of the most seductive voices of the 20th century, were alive today she'd most certainly be asking, "Is that a cellphone in your pocket? Or are you glad to hear me?"

According to a study by Motorola, one in 10 cellphone users carries a secret second mobile phone to conduct clandestine activities such as illicit affairs. Even Playboy has announced plans that it will be penetrating the wireless market. This, so far, is limited to Playmate voice-mail greetings. But they hope to use photo and video content too, as technology improves.

There are reverberations from cellphone sex, of course, and not all of them are upbeat. Neck strain, for example, and lousy sound quality. Headsets are preferred, especially for men, who need to keep their hands, well, handy. (Women, however, seem to have the facility to enjoy sex and even climax without needing to touch themselves.) But everyone is subject to one hazard of cellphone sex: If you get out of range or your battery runs out, there's always the danger of signal interruptus.

Admittedly, cellphone sex can be taken too far. Reportedly, a young woman in Taiwan had to submit to emergency surgery so doctors could remove a Nokia lodged in her rectum. Hospital staff reflected that she must have wanted to take advantage of the vibrate function.

Listening to all these tales of aural sex made me wonder how much my own sexuality is riddled with hang-ups. Perhaps my own sexual repertoire had become too static. Maybe I'd been putting a damper on my sex life all these years. I decided it was time to turn up the volume.

So one night, when my husband and I were making love, I tried to force myself to emote. My mind filled with dirty words and phrases. Moans and groans of lust echoed in my head. But I still felt too self-conscious to make the sounds audible. After we were done my husband, unaware of my failure to communicate, fell asleep. I stayed up, chastising myself like a sad refrain. But then I thought of Cal and mellowed out. If he doesn't need to see the actual people he's speaking to, maybe I don't need to utter my actual sounds out loud. All I really need to make is virtual sound. That's one of the miracles of the human mind. What you imagine can be as good as the real thing.

Isabelle called recently to tell me that she and Bill were no longer on the same wavelength. They were "breaking up" -- and it wasn't due to a faulty signal. Yes, Isabelle finally was feeling claustrophobic, even though Bill was a good 90-minute train ride away.

"The man wouldn't stop calling. It was getting creepy. He constantly needed to talk. I relegated him to voice mail for a few days, and he got angry with me. But a girl needs her cyberspace, you know?"

Stephanie Lehmann is a playwright living in New York. Her first novel, "Thoughts While Having Sex," will be published in January 2003.