Mainstream experts say only far-right legal extremists believe we can invade Iraq without congressional approval -- but those zealots are running the Bush administration. 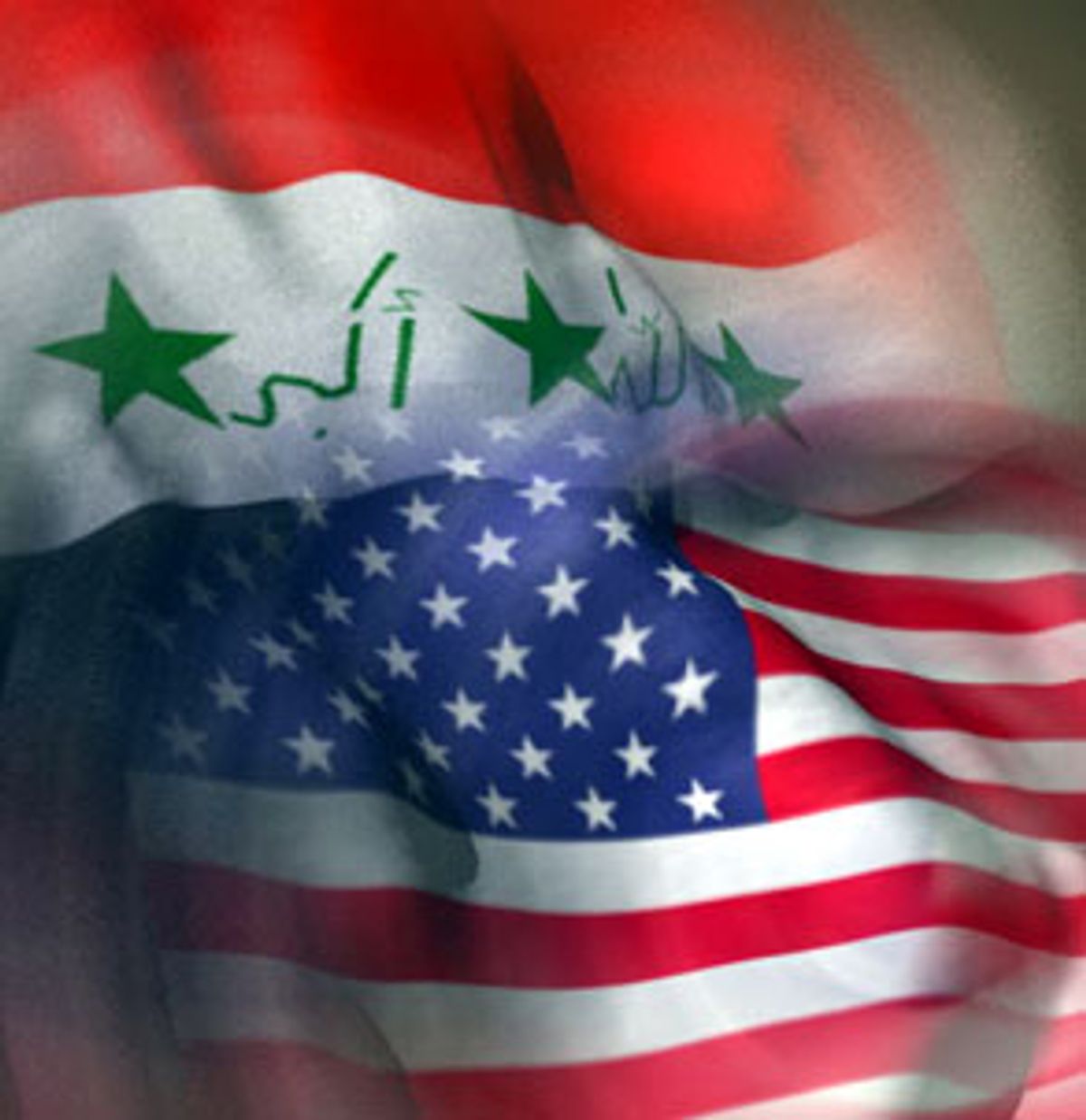 As legions of grateful criminal defendants know, a good lawyer can make a persuasive case out of nearly any set of facts. Thus President Bush has managed to assemble a legal team, culled largely from the Federalist Society -- an ultraconservative answer to the ACLU -- that says the president has the legal authority to wage war on Iraq without getting congressional approval. This despite the fact that the Constitution imbues Congress with the sole power to declare war, a power reaffirmed in the 1973 War Powers Act, which Congress passed in atonement for its dereliction in curbing the president during our undeclared war in Vietnam.

"From my point of view the invasion would be unconstitutional absent congressional consent," says Bob Levy, a senior fellow in constitutional studies at the Cato Institute, a libertarian think tank in Washington. Republican senators Chuck Hagel of Nebraska and Arlen Specter of Pennsylvania have also argued that Bush needs congressional approval. But Vice President Dick Cheney's tough talk on Monday, declaring the president's resolve to topple Saddam Hussein, would seem to indicate that the White House isn't listening.

Bush's current plan for Iraq does more than flout constitutional law. Many law professors say it would also defy a basic principle of international law enshrined in the U.N. Charter, which says that countries can act unilaterally only in self-defense. That's the law that justified the Gulf War -- Iraq broke it by attempting to annex Kuwait. "If we're acting independently, we look a bit like Iraq looked when it invaded Kuwait," says Edwin M. Smith, a former State Department consultant and professor of law and international relations at the University of Southern California. And that's from someone who says he believes that Iraq poses a profound danger to the world.

Smith is a former special counsel for foreign policy to Sen. Daniel Patrick Moynihan, but such concerns are coming from Republicans as well. In a New York Times Op-Ed last Sunday, former Secretary of State James Baker urged the administration to work through the United Nations Security Council, as mandated by international law.

Indeed, once the debate moves into the legal realm, it's no longer about whether we should or should not take out Saddam Hussein. Rather, it's a battle by those who would play by accepted rules of engagement both domestically and internationally and those who see those laws as illegitimate or irrelevant. It's no longer left vs. right or hawks vs. doves. It's the left, center and moderate right vs. the hard right, whose legal organ, the Federalist Society, is making much of the White House's policy.

Many of George Bush's legal advisors, including Attorney General John Ashcroft and Solicitor General Ted Olson, are members of the Federalist Society, which argued in a white paper that the War Powers Act is "unnecessary, unconstitutional, and shameful." Another member is White House counsel Tim Flanigan, who is largely responsible for articulating the legal arguments buttressing Bush's Iraq policy. According to the Village Voice, the Federalist Society gave Flanigan $700,000 to write a biography of former Supreme Court Chief Justice Warren E. Burger.

The group didn't return calls asking for comment, but its past pronouncements offer a telling clue to understanding the legal thinking underlying Bush's Iraq plans. A Federalist Society white paper about the War Powers Act calls the congressional power to declare war "a constitutional anachronism," and makes the rather stunning argument that Congress only has a role to play if the country is at peace and wishes to wage "an offensive (or what we would today call an aggressive) war."

Since that kind of war is outlawed by the world community, the white paper argues, the issue is moot. That same paper argues that the Act's premise of rectifying the mistakes of Vietnam is fallacious, since "by the end of 1972 the United States and South Vietnam essentially had the war won," and had America not fought in Vietnam, "we might well have lost the Cold War."

"This group of White House Federalist Society lawyers that is telling Bush he already has the authority to attack Iraq is the same group of White House Federalist Society lawyers that told him he could go right ahead and set up his [military tribunal] kangaroo court system," says Francis Boyle, an international law specialist at the University of Illinois College of Law at Champaign. "This is kangaroo constitutional law that we're seeing in operation here. What we're seeing here is a gang of ideologically driven lawyers who are getting the president and the country into serious legal trouble."

Clearly, Boyle is a liberal, but his interpretation of the law is shared by some traditional Republican allies at the Cato Institute. Levy, for example, says the arguments Bush has made suggesting he already has legal authority to wage war in Iraq are easily refuted.

The Bush team is arguing that the post-9/11 congressional resolution that authorized the war in Afghanistan extends to Iraq. That resolution says, "The president is authorized to use all necessary and appropriate force against those nations, organizations or persons he determines planned, authorized, committed or aided the terrorist attacks that occurred on September 11, 2001, or harbored such organizations or persons."

The president could say he "determines" Iraq was complicit in 9/11 without offering proof, but that would defy the intention, if not the letter, of the law. "Unless the president can demonstrate a link between Iraq and the events of 9/11, this authorization is not to invade Iraq," says Levy.

In addition to last year's congressional resolution, the White House insists that the congressional authorization for the Gulf War in 1991 still applies. That authorization was for the military to enforce a U.N. Security Council resolution to drive Iraq out of Kuwait. "The Gulf War resolution did indeed authorize the use of force in Desert Storm," Levy argues. "The purpose of the use of that force was to see to it that 11 different U.N. Security Council resolutions were implemented. Every one of those had to do with Iraq's invasion of Kuwait or penalties associated with it. Not one said a thing about Iraq's weapons of mass destruction. That resolution falls short in authorizing a preemptive strike against Iraq. Even if there's ambiguity in the 1991 resolution, that ambiguity is best resolved by Congress itself."

Of course, American presidents have been usurping Congress's war-making powers for decades, so Bush's arguments aren't shocking. "In practice the United States has initiated hostilities in the past without seeking a declaration of war from Congress," says Michael Noone, a retired colonel and former judge advocate in the U.S. Air Force who teaches law at the Catholic University of America. "The Library of Congress did a study of the number of times the president has sent the armed forces into hostilities [without a declaration of war], and it's more than 200 times. There's nothing new here." None of those instances, however, compares to the proposed preemptive invasion of Iraq. In any case, Noone acknowledges that what Bush is proposing is "certainly contrary to constitutional provisions."

And legally, constitutional provisions trump precedent, even if presidents have been ignoring that fact for 50 years. "The founders of our Constitution, if you go back and look at the Philadelphia convention, believed the most awesome decision our republic could make would be to go to war," Boyle says. "The only organs of government that could put us at war would be both houses of Congress. Not the president, but the House and Senate acting together." Citing the Vietnam War, he says, "Those instances when that precedent has been departed from have had grave consequences for the American people."

Equally grave, some experts say, would be the consequences of departing from international law as established by the U.N. Charter -- a charter America had a huge role in creating.

The U.N. Charter determines that one nation can act unilaterally against another only in self-defense, and according to Ved Nanda, director of international legal studies at the University of Denver, "The U.N. Charter is very clear about what self-defense means. Two criteria that must be met -- you have shown imminent necessity to take action and that your action is proportional, that there's not an excessive use of force."

But in a conference in 2000, members of the Federalist Society argued for a much broader understanding of self-defense, one that would include "anticipatory" actions as well as the right to "collective defense" in response to "low-intensity" aggression. That understanding, University of Virginia professor John Norton Moore argued, justified our actions against the Sandinistas in Nicaragua.

Smith explains the notion of anticipatory self-defense this way: "If the enemy armored division is just across the border, and you want to attack them first, that's within the traditional notion of self-defense. If you were attacking that armored division while it's still in its camp because you think they might come after you, that stretches the definition. That very well might be what we're doing."

Smith believes that's not necessarily a bad thing -- that it may be international law, and not Bush policy, that has to change. There is "very credible evidence that Iraq has developed weapons of mass destruction," says Smith. "It is no accident that Israel is ordering its first-response personnel to be inoculated against smallpox, which some people say could cause many more fatalities than nuclear weapons. When you look at a threat that's that large and that dangerous, maybe you have to think about the rules differently. Maybe the law just isn't adapted for the kind of situation we're facing. There's nothing at all in international law that can cope with the notion of something like al-Qaida."

Still, says Smith, America can't change the rules for itself without changing them for everyone. That's why he calls Baker's Op-Ed "dead on -- it reflected the importance of an international consensus."

If international law is simply ignored, says Nanda, there's little to stop India from invading Pakistan or a Chinese attack on Taiwan. "If a major country such as the United States takes this kind of action unilaterally, then it has a very severe impact upon the international order," he says. Once the powerful start deciding which rules to follow and which to dismiss, "then you are creating international anarchy."