Israeli leaders are overjoyed at the prospect of a U.S. invasion -- but it isn't good politics to admit it. 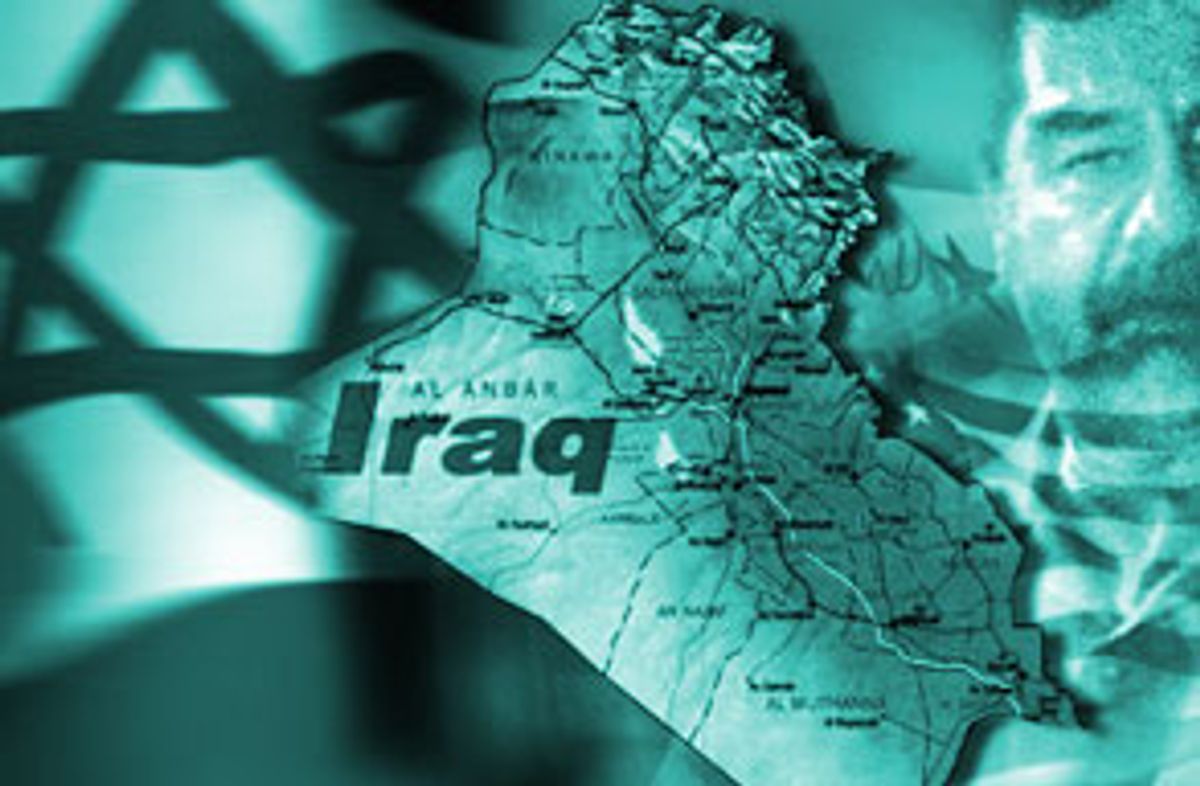 Early on Monday morning, a group of Israeli military planners met at the IDF general staff headquarters in Tel Aviv to discuss the implications on Israel of an American attack in Iraq. The chief of staff, Gen. Moshe ("Bogy") Ya'alon, ordered them to prepare a briefing for the nation's decision makers, to serve as a basis for policy and as a platform for consultations with the United States. General Ya'alon, for his part, said recently that he is "willing to bet" on an American attack "that could catch us sooner than expected," as he told reporters.

The possibility of an American attack on Iraq puts Israel in a tricky P.R. dilemma. From an Israeli perspective, it is hard to conceive of a more desirable move. It would rid the country of one of its worst enemies, Saddam Hussein, and uproot a strong pillar of Arab nationalism and rejectionism. On the other hand, it is in Israel's interests not to appear as a warmonger, and to avoid any impression that the U.S. is going to war on Israel's behalf. A visible Israeli dimension would make it hard for the Bush administration to recruit support in the Arab world, especially given the current Palestinian-Israeli conflict, now two years old. Moreover, in a worst-case scenario, Israel would not want to take the blame for an American failure.

Israeli leaders have largely been cautious in their approach to Iraq. In recent years their attention has focused on Iran as Israel's main long-range threat, leaving Saddam for the Americans and the U.N. to deal with. This policy, embraced by successive governments from both ends of the political spectrum, had the virtue of allowing Washington to disconnect the Iraqi theater from the Israeli-Arab context, thus giving the Americans a freer hand in the region.

But as the war drums started beating in Washington last month, and the local papers filled up with stories on dreadful Iraqi biological attacks and a possible Israeli nuclear response, the Israeli leadership changed its tone. Prime Minister Ariel Sharon and foreign minister Shimon Peres appealed to the Bush administration "not to delay" its action in Iraq. Two weeks ago, Sharon told visiting Sen. Robert Torricelli, D-N.J., and U.S. ambassador Daniel Kurtzer that any delay would not make it easier to act in the future. Peres appeared on CNN and said that "the question is not whether to act, but when, and any postponement increases the risks and the possibility for an Iraqi arming." The message was sufficiently similar to Sharon's to suggest prior coordination between Peres and the prime minister. However, when their remarks were published, Sharon and Peres backed off, repeatedly denying having urged the Americans to attack. Peres even ordered the foreign ministry to lower its profile on Iraq, and avoid the issue altogether.

What caused the careless slip-up? Political expediency is the most likely answer. On the surface, Sharon and Peres represent two diametrically opposed ideological camps. One is the living symbol of settlements and occupation, the other a Nobel peace laureate and the architect of Israeli-Palestinian reconciliation. But these elder leaders of Israel's "national unity" coalition have served in politics and national defense for over a hundred years: If nothing else, they are political survivors. The looming signs of early elections threaten their future. Both Peres, who will turn 80 next year, and Sharon, 74, want to push back election day to the latest possible date, Oct. 28, 2003, instead of risking an early retirement. The Iraq crisis gives them a reason to do so.

Their main adversary is defense minister Binyamin ("Fuad") Ben Eliezer, the Labor Party chairman, who faces a tough primary fight in November. Fuad's main source of political strength is his ability to threaten Sharon with the breakup of his coalition. Ben Eliezer wants to quit before the primaries, a move that will help him retain the party's top position. But if Israel is preparing for a national emergency, like an American attack on Iraq -- which might prompt Iraqi retaliation against Israel -- the need for government unity would get in the way of his plan. It is small wonder, then, that Ben Eliezer downplayed the Iraq issue and tried to turn the public attention toward his own attempts at reaching a gradual cease-fire with the Palestinians.

Domestic considerations aside, Israeli analysts see Bush's Iraqi campaign as a positive strategic development, one that follows Bush's post-9/11 path of supporting Israel and standing up to the Arabs. The prevailing thought in Israel's defense establishment is that the creation of a pro-American, quasi-democratic Iraq would have a tremendously positive effect on the whole region. Iran, fearing it would be the next victim of an American attack, would put its nuclear program on hold. The appearance of a new regional powerhouse would shake up Saudi Arabia and Egypt, America's veteran allies, perhaps leading them to reform their corrupt and despotic regimes and streamline their stagnant economies -- developments that would work against the rise of Islamic fundamentalism. And last but definitely not least, Israeli military planners believe that regime change in Iraq could affect the Palestinians, too. With their Arab backers weakened, the Palestinians would probably not change their goals, but they might settle for a lesser deal with Israel. "They might realize that the road will be longer, and perhaps accept ideas like [Sharon's] long-term interim agreement," a senior official told me. "Even if there's no war, but the U.S. is holding the world in expectation of one, there are many processes that work in our favor."

The Iraqi scenario has already influenced Israel's approach to the conflict with the Palestinians. Soon after Gen. Ya'alon took command last month, the military chiefs called on Sharon. They proposed a waiting period of "risk management": turning down the military heat on the Palestinian front and avoiding violent outbreaks along the Lebanese border. In their view, Israel should do everything possible to support an American attack on Iraq, and containing the local conflict is the best way to do that. The Bush administration sent a similar message to Jerusalem. The army also told Sharon that within six to 12 months the Palestinian leadership would change, with Yasser Arafat's power declining. During this period, Israel would build the fence separating it from the West Bank, thus erecting a physical barrier to Arab expansion. Sharon accepted the military's policy recommendations. He agreed to implement certain calming measures toward the Palestinians, like withdrawing from Bethlehem, while keeping his right-wing coalition partners in line by assuring them that "we only moved two jeeps from their positions."

Sharon and Ya'alon share the belief that Israel must crush the Palestinians decisively and get rid of their current leadership. On Iraq, however, they have different views. The prime minister told a Knesset committee, "Iraq is the most dangerous threat." The chief of staff, for his part, believes that Israel's main security dangers are the Palestinians and Iran's nuclear program; he puts Iraq down the list. At the worst, a few missiles would fall on Israel, he told reporters.

Israelis have sour memories from the 1991 Gulf War, when Saddam Hussein, under American attack, launched 39 scud missiles at Israel. There were almost no casualties. Then Prime Minister Yitzhak Shamir rejected calls to retaliate and heeded the elder Bush's demand that Israel should stay out of the fighting. The country's invincible image suffered a massive blow, and some argue that its new sense of vulnerability led it to the Madrid peace process and eventually to Oslo. After the war, however, there was criticism of Shamir's inaction. The critics argued that by sitting tight, Israel hurt its deterrent image and exposed its weakness. Ehud Barak, then the chief of staff, is said to have planned an assassination of Saddam to settle the score. But when five special-ops servicemen were killed in a training accident, the planned operation was called off.

Sharon, who was the housing minister in Shamir's cabinet, vowed not to repeat his predecessor's policy. Sharon told Bush that in case of an Iraqi attack, Israel would exert its right of self-defense. Israeli officials say that the current situation is different than 1991, when the U.S. led an Arab coalition to free Kuwait. This time around, it's a purely American game, and Israeli involvement is not risking the (nonexistent) coalition. Ya'alon said that faced with Iraqi attack, Israel should "show our capabilities." Gen. Giora Eiland, the military's chief of planning, told an American visitor, "We must retaliate to preserve our deterrent image that was eroded by our non-response during the Gulf war."

Sharon told the Knesset committee that a response would not be automatic, but if Israeli population centers are hit, "We could not sit tight." He did not explain what purpose Israeli intervention would achieve, considering that American forces were already dealing with Saddam. Nor did he explain who would take Israeli "deterrence" seriously, when it was carried out safely behind the American shield. So far, there has been little public or political debate in Israel over these matters.

The nature of the Iraqi threat is unclear. Intelligence chiefs have said in recent years that if Saddam's back is pushed to the wall, he would "use anything in his possession" to attack Israel. But nobody in Israel knows if the Iraqis have missiles that could reach Israel, or whether those missiles have warheads with chemical or biological weapons. The public fear level has not risen so far. There are no queues in gas mask distribution centers, as there were in past emergencies. The government, under some pressure, decided to vaccinate 15,000 members of the security and health services against smallpox, as a first measure of preparing for attack. The military trained its rear command, air force and air defense units. Sharon made a public visit to Tel Nof, Israel's largest air force base, and had his picture taken near an F-15 fighter. Israel has also asked the U.S. for the longest possible warning before an attack, to enable better preparedness. Before Afghanistan, Washington gave Sharon a 60-hour warning, but Iraq is much closer.

The U.S. is likely to oppose any Israeli intervention in the war, even though Sharon speaks about his "understanding" with the administration on Israel's "right for self-defense." Even without an Arab coalition, and given the Saudi opposition to the war, Washington would not like to alienate its Arab allies even further by letting Israel participate. According to a senior Israeli official, the Americans would not want Israel to play a part, but they see no reason to discuss it prematurely in public, "so they simply ignore the Israeli talk on Iraq."

The issue of Israeli retaliation has been discussed confidentially between the two governments. The American position is that Washington has not yet determined if Israeli intervention should be avoided by all means, like in 1991. If that decision is reached, then the Americans will devote more operational efforts to thwart Iraqi missile attacks against Israel. They also asked if faced with a low number of casualties, Israel might suffice with a "token response."

The Israelis are now awaiting further consultation with the administration. Sharon is scheduled to meet Bush in Washington in late November. A joint committee for strategic cooperation should meet in Hawaii around that time. By then, the picture might be clearer: According to defense officials, the Israelis expect an American attack on Iraq "not before the end of the year."