The invention of the nude in America

Thomas Eakins caused quite a stir by encouraging his male and female painting students to get naked for each other. 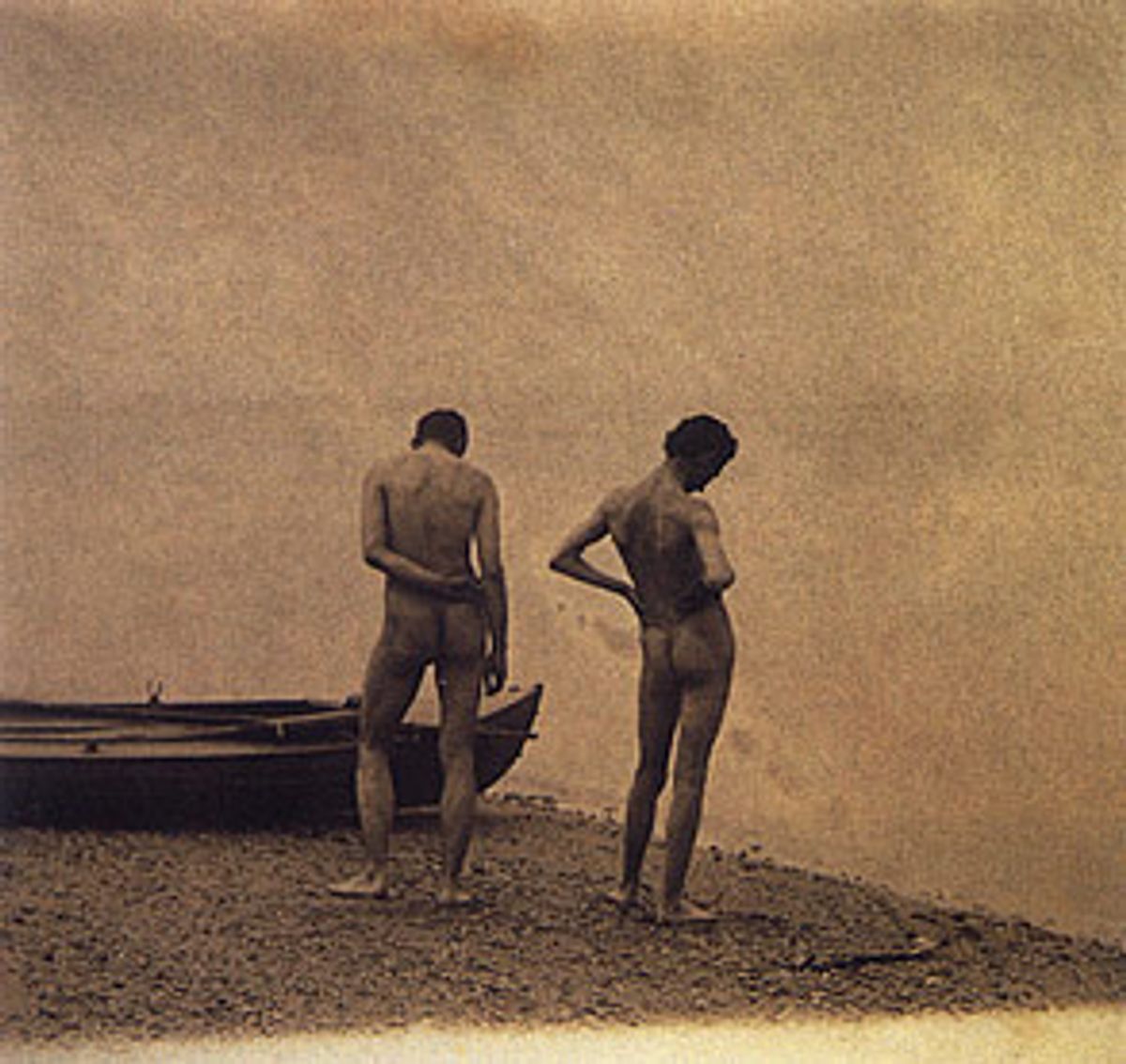 Americans didn't get naked before the 1880s. Sure, citizens "took their clothes off." Old George Washington removed his coat and trousers to take a bath -- even removed his powdered wig -- but the man wasn't naked. He wasn't nude. The American nude did not exist until Thomas Cowperthwait Eakins (born 1843) invented nakedness in Philadelphia by encouraging his college-age artists to pose naked for each other and for his camera.

Eakins taught painting at the Pennsylvania Academy of Fine Arts. Jeff Rosenheim, a curator in the Department of Photographs at the Metropolitan Museum of Art in New York (where an exhibit of Eakins' work is showing until fall) says, "As a painter, the camera was one of many different tools that Eakins demanded his students master to train the eye to see what is truly there. He had great belief in preparatory work, such as working on a cadaver to really understand the difference between muscles and tendons and bones."

The teacher himself was no stranger to nudity. Eakins stripped and turned his butt to the camera. He had a picture taken of himself sitting naked on a horse. In perhaps the most striking photo, Eakins stands naked holding a nude woman limp in his arms. It's likely she was a model. Eakins encouraged his female students to strip for each other, but the only coed willing to do it for the camera was a girl named Susan Macdowell. She had a long back and pleasant breasts. Eakins eventually married her. The other female subjects in his photographs were likely professional models, who sometimes wore masks to hide their faces.

Eakins had no trouble getting his male students to go buff. These boys were photographed wrestling naked in the dirt or playing the pipes as if they were Pan. Eakins was an early supporter of Eadweard Muybridge, and together the two made motion study "strobe" photographs of naked men walking and running and jumping.

Although Philadelphia was the city of "brotherly love," and Eakins knew Walt Whitman, art historian John Esten (author of the just published "Thomas Eakins: The Absolute Male") says there is no gay subtext to Eakins' work. "I don't think that has anything to do with it. Many of the students became friends and remained very close to him until he died." Eakins expert Darrel Sewell, retiring curator of American art at the Philadelphia Museum of Art (where the Eakins show originated) says, "There's a whole homosexual thing where people say, 'Well, Eakins took photographs of naked men therefore he must be gay.' That's a whole idea that appeared in the 1970s. There is no contemporary evidence that he was. But homosexuality didn't have very much of a stigma attached in the 1870s, 1880s."

As for the nudes, Eakins took more photographs of naked men and women than he actually painted. One of his most famous paintings is "Swimming," done in 1884-85. It depicts six naked young men and a retriever swimming on a sunny day. The painting is in the American realism style of the time -- a little impressionistic, but nothing like what was going on in Paris. The colors are sober. This is not Tom and Huck taking a dip naked.

"Eakins painted 'Swimming' for the new head of the committee of instruction at the academy," Sewell says. "The painting was Eakins' summary of what he thinks academic art was all about. It was also a painting of naked male students at the academy. It was hard to imagine the head of the board of the academy hanging a picture of naked academy students in his living room."

In those days, men and women studied in separate classrooms and the male artists painted male models who were completely naked, while the females painted men wearing loincloths. The president of the art academy, James Claghorn, believed that the sight of an American penis would violate these girls' "maidenly delicacy." Furthermore, they would lose their "treasure of chaste and delicate thoughts."

According to the Random House Historical Dictionary of American Slang, "bullshit" was first uttered as a synonym for "nonsense" in 1866, so it's very likely that's what Thomas Eakins thought Claghorn was full of. Eakins was an alpha male who was coarse and belligerent and often arrogant.

So in the autumn of 1885, when Thomas Eakins stood in a classroom full of prim maidens behind their easels and whipped down the male model's loincloth, he probably gave no warning at all. The man just presented an American penis to the girls. A simple penis. Just how simple, we'll never know. Was it circumcised? Long or fat? How violated did those maidens feel? Based on later female students' reactions to Eakins' presentation of male nudity in the 1890s, some of those 1885 women were hospitalized. Some assumed that Eakins had now become their husband.

According to the ultimate Eakins book, Darrel Sewell's "Thomas Eakins," published by the Philadelphia Museum of Art and distributed by Yale University, it's likely that some of the girls contemplated suicide. After Eakins de-loinclothed the model, Eakins' brother-in-law claimed that his own daughter -- Eakins' niece -- had killed herself after her uncle had forced her to paint portraits of naked men. (Supposedly this brother-in-law also claimed Eakins had sex with his dead sister Margaret.)

"Eakins' third sister and brother-in-law were his biggest supporters when he was fired from the academy," explains Sewell. "They had a child who wanted to be an artist. Her parents said, 'We would rather not have our daughter study the nude figure.' Eakins said, 'That's what I do.' The niece was a kind of a temperamental soul given to hysteria. There was a strain of mental instability in the Eakins family. His mother died of 'exhaustion arising from mania.'"

Sewell continues, "A number of papers have come to light that show the sister and brother-in-law sent their daughter to live with Eakins because she was disrupting the home. Then the girl decided not to study art and became a nurse. And she accidentally poisoned a patient with an overdose of medicine. So she then took the medicine herself as an act of contrition, but didn't die. She then lived at home and eventually did commit suicide. I don't know if Eakins had an incestuous relationship with her or not. Like many things, it's a complicated story. It's hard to know what that scandal was about."

In the end, a Philadelphia newspaper article reported that Eakins had revealed the "absolute nude" to those girls. James Claghorn saw to it that Eakins was fired. Many students protested. They marched in front of the art academy with large letter E's attached to their chests. They formed an art student league, and invited Eakins to teach there. Eakins went on to have a fairly respectable career as a painter until he died in 1916.

While most now respect Eakins as a painter, there is controversy over his place as a photographer. Historian Esten doesn't believe Eakins considered photography an art: "He only did it to help his painting." Jeff Rosenheim disagrees: "Eakins had a profound understanding of the poetics of photography during the late 19th century."

In the end, do Eakins' photographs make him a pornographer? "I think the primary purpose of all of these images is not the erotic charge that we see in them," Darrel Sewell says. "I think they are serious aesthetic investigations." Then he adds, "There are no photographs of naked men and naked women together except for one of Eakins holding a naked female." Then he points out that "the photographs of [naked] children [Eakins took] would be hard to justify in today's morality. One of the photographs shows children posing nude and there is a woman in a black dress just standing by -- a chaperone. A lot of Eakins' photographs show one naked man or one naked boy. If you see other photographs, there were a whole group of little boys."

Was Eakins more obsessed with the nude than other artists? "Good question," says curator Rosenheim. "Kind of complicated to answer. He lived with the nude in a different way. There are very few artists who taught as extensively as Eakins did. After he established the Pennsylvania Academy, it very quickly became the most radical and renowned teaching program in the country. Life drawing is an essential component of art study. He brought that tradition from Europe. He was obsessed with understanding the human figure clothed and unclothed more than any artist of his time. Is Lucien Freud 'obsessed' with the nude?" (Unfortunately, yes. But that's another story.)

Was Eakins an exhibitionist? "Well, he liked to take his clothes off," Rosenheim says. "He also had a very modern belief, a feminist ideal, that you cannot expect a woman to take her clothes off before a life drawing class of men if the men were not willing to take off their clothes for a class of women. He demanded that his students pose for each other. And he couldn't demand that his students pose for each other if he wouldn't pose for them himself. I think you're projecting an early 21st century idea of what an 'exhibitionist' is supposed to be on a small number of occasions when he got naked." He pauses. "But he did take his clothes off a lot. He liked to take them off. Not just for academic reasons."

"Eakins might have been an exhibitionist, I don't know," Sewell says. "He was such a fascinating person. Outrageous. People try to place him about a generation younger than he was. The Ashcan School was a group of artists who started in Philadelphia and then went to New York painting the seamy side of daily life. They were politically liberal and believed in free love. Eakins was a whole generation earlier than that. He lived in the same house where he grew up. He had a dignified side to him that was very real. I don't think he was outrageous and in favor of free love in the same way the next generation of artists was. He rejected the idea of the artist as a society figure that grew exactly at the same time."

Darrel Sewell is then asked, "Do you think you would have liked Eakins?"

"Yes," he answers. "I think I would have found him very fascinating. He was a self-invented personality. He was an artist who chose to be what he was and he had the financial means to do that. From his very early days you can see him taking a stand about what he thought was important. I think that would make him a very interesting person to know and try to figure out as we're trying to figure him out today."