At the U.N. Summit on Sustainable Development, the harshest critics of Bush's recalcitrant policies -- and his absence -- are Americans. 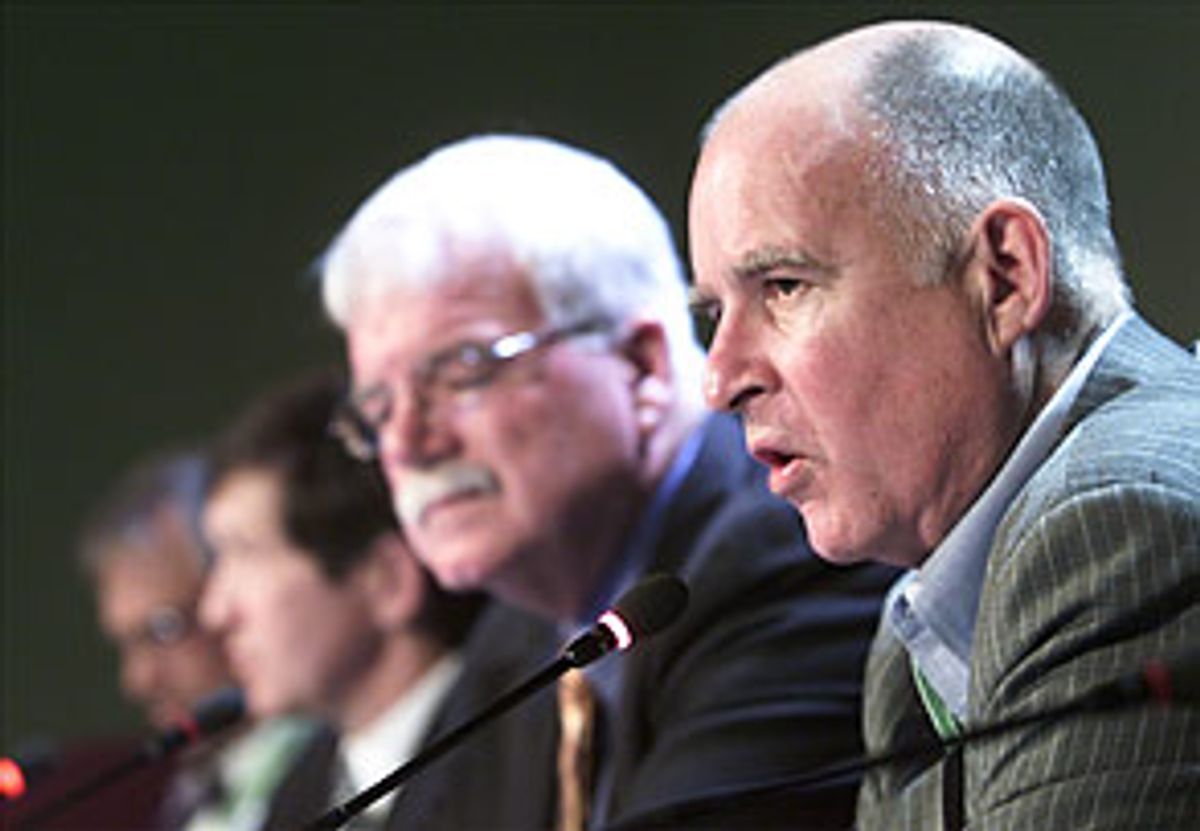 With President Bush still on vacation in Texas, the U.S. delegation is keeping a low profile this week at the United Nations World Summit on Sustainable Development in South Africa. But the same cannot be said for U.S. policy, which has been cast into the spotlight all week.

Bush's decision to snub next week's meeting of heads of state -- and its implied disdain for summit proposals -- has made U.S. policy a center point of discussion despite efforts by the organizers to play it down. Delegates have taken up this debate during plenary sessions, at group discussions on every major issue and repeatedly at press conferences.

Ian Johnson, the vice president who oversees sustainable development programs for the World Bank, conceded that even after so much discussion, his organization is still trying to understand U.S. policy. "It has some interesting views and some are not part of the previous administration," he said at a press conference.

Many U.S. civic leaders and activists are less charitable, and indeed, the uncompromising attention on the Bush administration's environmental policies has revealed a significant gulf between the official U.S. line and sentiment among its unofficial representatives here at Johannesburg's sprawling convention center. Not only have delegates repeatedly been quizzed on U.S. policy and its impact, but some of the most vocal criticisms have in fact been delivered in American accents. Furthermore, instead of asserting America's independence, its refusal to agree to any binding commitments here has suggested to many participants that it is suffering a bout of myopia.

The energy issue -- hotly debated this week -- is a case in point. The draft plan suggests an increase in the percentage of renewable energy -- solar and wind energy, for example -- to 10 percent globally by 2010. The European Union this week even suggested that figure should be raised by another 5 percent.

The U.S. has dug in its heels to strongly resist such proposals. Since America is responsible for one-quarter of the world's energy consumption, its opposition is significant. Some other oil-producing countries, like Saudi Arabia and Nigeria, are also strongly opposed to such change.

But less reliance on oil-producing countries could be very welcome -- a point that's cast in sharp relief now that the U.S. is contemplating an invasion of Iraq. If President Bush really sought to shore up the independence and security of the U.S., critics here say, he could do well to endorse such agreements on renewable energy.

Jerry Brown, the Democratic mayor of Oakland and former governor of California, spoke here of the "catastrophic consequences" of the Bush administration's refusal to budge on renewable energy targets. The stance makes the U.S. more vulnerable to instability in the Middle East and thereby diminishes its independence and sovereignty.

"The fact is that under the oil-first policy of Washington, the U.S. is more vulnerable and dependent on countries in the Middle East that don't share its philosophy," Brown said. "So renewable energy is crucial to enhance and preserve U.S. independence."

Rep. Dennis J. Kucinich, D-Ohio, shared that view. Speaking at a news conference to launch a solar energy initiative, he said: "We can improve our national and perhaps global security by changing the emphasis on our sources of energy."

Kucinich said much of the energy debate concerned U.S. efforts to pull back from any set commitments to change. "It's this idea that the summit should center only on what is achievable and doable," he said. "But when you scratch the surface, you discover really a failure of political will and failure of vision. The discouraging of ambitious goals and words actually decouples goals from action."

Such partnerships are a central part of the summit's focus on action. It takes its cue largely from the first Earth summit held in Rio de Janeiro, Brazil, 10 years ago when a plan called Agenda 21 was put in place.

But little progress has been made since then. As a result, the 18,000 delegates at this conference are working hard to finalize a draft plan of action by Sunday to present to their heads of state next week for ratification.

Most of these meetings are behind closed doors, though a series of discussions and plenary sessions aims to make the process more inclusive. The major issues they are dealing with -- besides energy -- are water, health, agriculture and biodiversity. Most delegates want binding commitments to timelines and targets. But the U.S. opposes such commitments. It is particularly wary of the Kyoto Protocol, which would commit it to firm targets on reducing greenhouse gases. In fact, the U.S. has reportedly agreed in secret with the E.U. to avoid any mention of the Protocol in the final action plan.

On Thursday, the U.S. officially launched its five partnership initiatives focusing on water, clean energy, hunger, forests and HIV/AIDS. Such initiatives, which are collaborative ventures including different sectors of society, form the centerpiece of the U.S. delegation's efforts here.

They are not the only ones, however. So far, the U.N. has received 218 such proposals -- all designed to fuel sustainable development projects.

"President Bush stated last week that the U.S. delegation would come with concrete, practical proposals for partnerships," U.S. Undersecretary of State Paula Dobriansky said at a news conference Thursday. "These partnerships are key elements in the new approach to development that President Bush embraced with other national leaders at the Monterrey Conference in March -- an approach based on shared accountability among developed and developing nations."

Some nongovernmental organizations, however, view the partnerships as a cop-out. They insist that such initiatives, while valuable, should not replace binding agreements between governments with concrete timetables and targets.

But James Connaughton, chairman of the White House Council of Environmental Quality, insists partnerships are the way to achieve meaningful results.

"What countries need, they will negotiate with us and other organizations," he said. "They can decide how the money should be spent -- not have it decided for them at an international forum ... We are committed, but we want to avoid defining terms and timetables that have no relation to a real plan of action."

Connaughton strongly defended President Bush, saying he was engaged at the highest level in various negotiations preceding this summit. "The multidisciplinary high-level implementation team has been brought to this conference and that should be recognized," he added.

He also played down the differences between the U.S. and other countries gathered in Johannesburg. "We think this summit gives an opportunity to work together on 98 percent of common goals and to get on with action points," Connaughton said. "The criticism [of Bush] surrounds isolated issues that catch attention because they are controversial. If there is a frustration, it's that the consensus of action is not getting the attention it deserves."

His words, however, were not enough to appease critics. The U.S. youth caucus today became the latest group to add its opposition to American policy.

In a statement, the caucus said the refusal of the U.S. to consider binding agreements on renewable energy did not reflect the views of the majority of Americans. It said U.S. students were "outraged" at the administration's position on climate issues as well as its flat rejection of a proposal to redirect subsidies from so-called dirty energy to clean energy.

Kucinich also stressed that most Americans are concerned about the impact of the country's energy policies and practices around the world. "There are many Americans who understand our responsibility," he said. His sentiments are being echoed in summit halls where the message from Americans seems to be: Don't judge our country by our government.

One plenary debate on energy evoked a rebellious response from a U.S. delegate representing the views of local government: "The consensus [at the summit] is that our national leadership just doesn't seem to get it," the delegate said, to much applause. "But please, don't judge American people or local authorities by that."

Organizers have tried to downplay talk around the role of the U.S. at this summit. Nitin Desai, the summit's secretary general, said at the start that the U.S. had participated in every part of the process and at very senior levels.

Nkosazana Zuma, South Africa's foreign affairs minister, went further. She said political will was not only indicated by the physical presence of heads of state, but by whether the state itself participates constructively and will continue to do so. "What is critical is the participation of all states but also a critical mass of leaders," she said. "We are confident that even though Bush is not here, it will be just as successful."

That of course remains to be seen; the summit still has a week to run and the heads of state only convene on Monday. Secretary of State Colin Powell is also expected to arrive in Johannesburg next week. But the big question, and not only on the issue of energy, is whether all this talk will produce more heat than light.

The agenda is so broad here -- from saving family farms to conserving mountain goats, from encouraging business ethics to protecting migratory birds -- that it invites every man and his hobbyhorse to jump aboard. And they have done so with gusto through marches, fliers, demonstrations, exhibitions, press conferences, debates and informal networking in the queues.

For all the frenetic activity, however, some firm decisions must be made. If the U.S. gets its way and no binding agreements are made, many delegates here will consider the conference a failure.

"The people in this [Bush] administration might not want to talk about timetables, but the truth is we must talk about them," Kucinich said. "When scientists can show that over time global warming can, in fact, impact on the increase in world temperature, then we better be talking about timetables. We are not a society whose leaders want to turn back the tide."

Perhaps one positive result can be drawn from the fray: If President Bush is so anxious to avoid binding agreements, he must believe in the authority of this summit. That thought might encourage delegates as they pore over the final text to be presented to their leaders next week.

Kim Gurney is a freelance journalist based in London who writes for a variety of publications in the United Kingdom and South Africa.