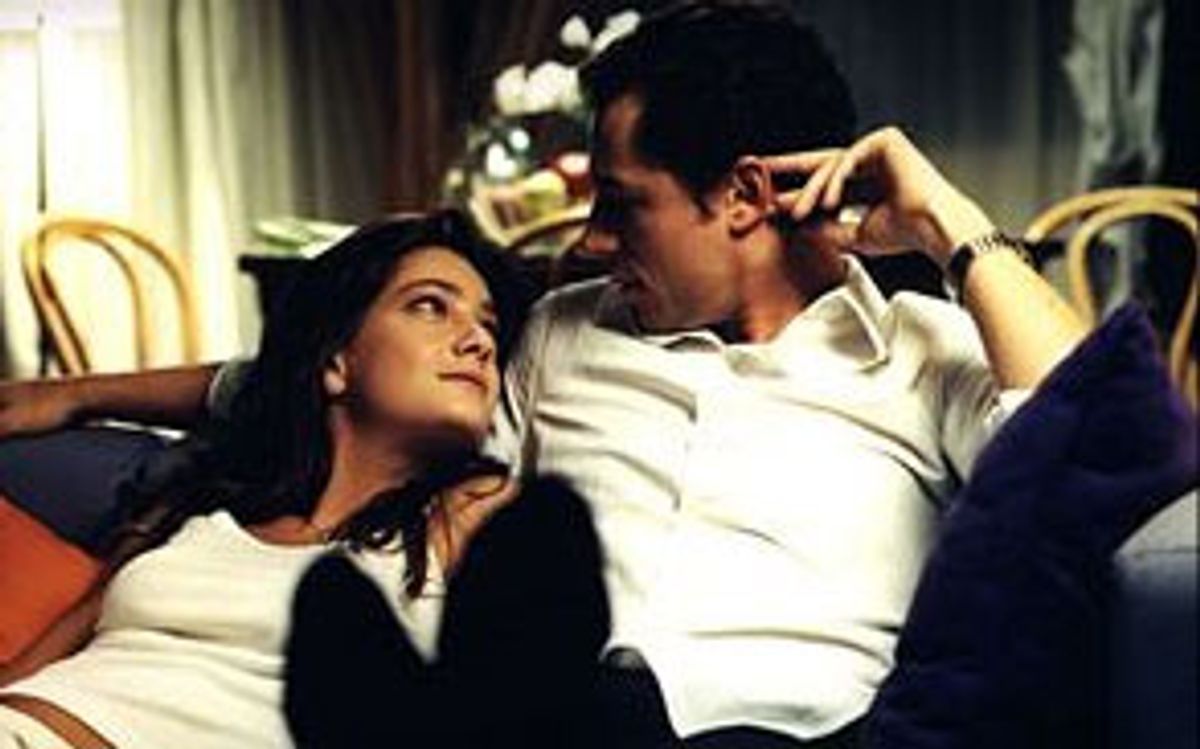 Midlife crises are undignified enough when they arrive on time. When they happen to men barely out of their 20s, they're infantilizing. The Italian comedy-drama "The Last Kiss" follows the panic that successful ad writer Carlo (Stefano Accorsi, who looks like the Italian answer to Bob Geldof) is thrown into when Giulia (Giovanna Mezzogiorno), his live-in girlfriend of three years, becomes pregnant. Carlo puts on a happy face, but starts fretting immediately that the passion has gone out of his and Giulia's relationship, and that a baby will destroy whatever's left.

It doesn't help that one of Carlo's buddies, who has an infant son, starts talking about taking care of a newborn as if it were among the foremost torments of the damned. (He's one of those annoying people who tell people contemplating children that "your life will never be the same," making it sound like a curse.) Carlo's fear of what he'll be missing sends him into the arms of Francesca (Martina Stella), a yummy 18-year-old he meets at a wedding. Francesca is sure that she's found the love of her life, professes that she wants to be with him always, and even gives him a copy of her favorite book, Hermann Hesse's "Siddhartha."

The movie parallels Carlo's crisis with the experiences of his three best friends, who serve as something like the movie's chorus. Other than an aversion to personal grooming, the three share an absolute panic at the thought of adult responsibility. They're always nattering on about how society -- by which they mean work and family -- has sucked the soul out of them and how they're meant to be free. Marco (Pierfrancesco Favino) is the guy with the new baby and is always bickering with his wife. Paolo (Claudio Santamaria) has dropped out of working in his father's business even though the old man is on his deathbed and needs his son to help out. And Adriano (Giorgio Pasotti) is a dreadlocked stoner who beds as many girls as he can and makes money counterfeiting CDs.

Writer-director Gabriele Muccino understands these four exactly as arrested adolescents who have childishly equated any sort of stability or responsibility with selling out. With the exception of Carlo's wife, Giulia, the women this quartet exasperate don't get equal screen time, but the movie is hardly unsympathetic to them. Muccino doesn't try to hide how much these buffoons hurt their long-term partners, and even the women they casually bed down with. "The Last Kiss" is a movie where, as in life, the women are more mature than the men. But the rest of the movie's verisimilitude to actual experience doesn't help it much.

What's wrong with "The Last Kiss" isn't that the men act like fools or hurt the people closest to them. None of that should prevent us from having an emotional stake in what happens to a movie's characters. And Muccino doesn't pretend that the panic and cowardice that the men disguise as a rejection of society's constraints is anything else. It's in no way a stupid movie. The trouble is that there's only so much emotional energy you can expend on these assholes before you start wondering why you're paying attention to them at all.

The movies that have dealt best with the arrested adolescence of adult men have been made with a rueful sense of self-recognition and treated the men as comic figures, fools who get exactly what's coming to them. I'm thinking of movies like Bertrand Blier's "Going Places" and "Get Out Your Handkerchiefs," along with his almost unseen "Mon Homme." In America we've seen Bobby Roth's "Heartbreakers" and Barry Levinson's "Diner." Every one of those movies knew exactly how much weight to give the preening complaints of the male protagonists. Even "American Pie," which was attacked because of its premise, made the teenage boys the butt of the jokes while treating the girls' sexual experiences seriously. (Think of the scene where Tara Reid at last goes to bed with her boyfriend only to have a lousy first time.)

"The Last Kiss" treats the men's experiences straight, and though Muccino can see that they're jackasses, and that some of them will happily continue to be jackasses, by making the movie as a relationship drama, he winds up taking them nearly as seriously as they take themselves. And these characters cry out to have their preoccupations turned into comedy. It could only make us feel affectionately toward them.

This is a shame, because Muccino is very canny about the different reasons men and women cheat. The movie also follows Giulia's mother, Anna (Stefania Sandrelli), who is fed up with her loveless marriage and making tentative steps toward getting out. Seeing Sandrelli, the young temptress of the great Italian comedies "Divorce Italian Style" and "Seduced and Abandoned," and one of the stars of Bernardo Bertolucci's "The Conformist" and "1900," appear aged, with her body thickened and lines visible on her face, reminds you of one of the great pleasures of foreign movies. Europe tends not to put its stars out to pasture but to continue providing roles for them, to treat aging as something natural instead of something vile to be hidden away or ignored.

Anna may not be a great role, but it's wonderful to see Sandrelli, who's very touching. (And it's a treat to see Sergio Castellitto, last seen in Jacques Rivette's "Va Savoir," as her former lover.) The best performance in the movie, the most appealing character, is that of Giovanna Mezzogiorno as Giulia. In the midst of all these men flailing about, she's blessedly grounded and sane. And she's so lovely that she makes you think Carlo is an ass for cheating on her.

A really good movie would have made it clear how a man could cheat on even a smart, beautiful, capable woman like this. And the coda, the best part of the film, gives some sense of the terrific trade-off married life can be. But it pales next to "Bull Durham" or "Jackie Brown," the most recent films to have understood that midlife compromise can be a pretty good deal. The problem with "The Last Kiss" is that we see the characters accepting that they have to live with compromise before seeing them learn to live with it. Muccino's ending suggests what the movie might have been. It means to put a hopeful question mark over the characters' future. But the only question I left with was: Do teenagers really still read Hermann Hesse?