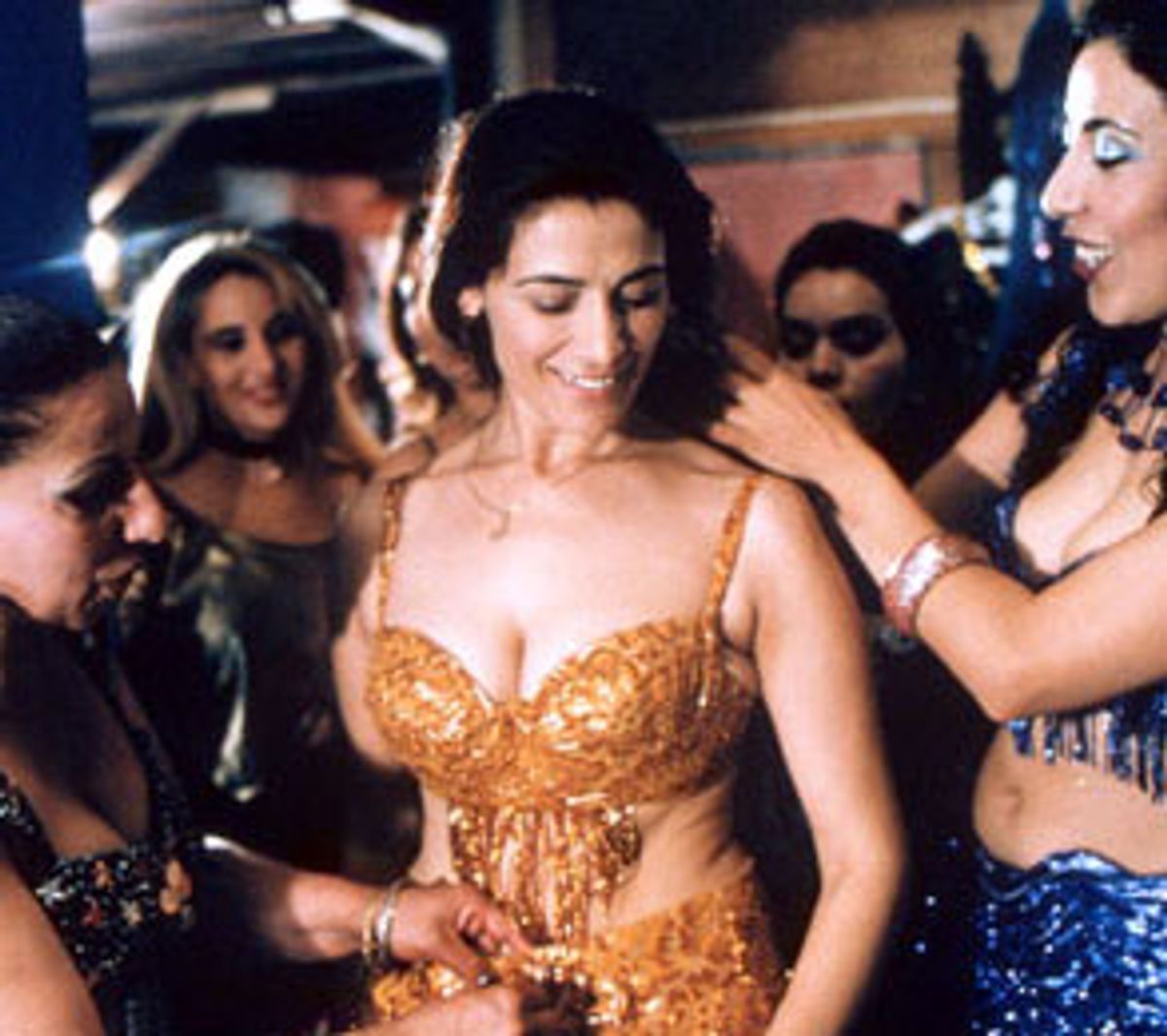 "Satin Rouge," the debut feature of Tunisian-born filmmaker Raja Amari, has already received -- and will continue to receive -- attention because it's a movie set in an Arab country that deals directly with the sexual experiences of a middle-aged woman. And it's easy to see why, particularly at this juncture in history, audiences would be interested in its relevance as a sociopolitical snapshot of attitudes toward women in Islamic countries.

And yet all politics start with the skin we're in, and Amari, to her great credit as a filmmaker, understands that. "Satin Rouge" is only partly a movie about the misogyny of certain Islamic cultures. (Even if Islam as a religion doesn't necessarily preach misogyny, if one of its cultural interpretations is that a woman should be sentenced to death by stoning for having a child out of wedlock, there's no other word to use.) "Satin Rouge" is mostly about the experience of one aging woman that reflects, to some degree, the feelings of aging women everywhere.

Even the most progressive of moviegoers -- maybe especially them -- tend to watch movies made by non-Westerners from behind a comfortably thick window: There's often something self-congratulatory about the way We (Westerners) watch movies about Them (everyone else) with the sense that we're well on the road to a deeper understanding of other cultures. But "Satin Rouge" works on another level altogether. Its "us" and "them" aren't divided so easily along cultural and political boundaries. In this film, the most complex and difficult boundaries are the nebulous air space between men and women, and the stealthy passage of time that all of a sudden, without our realizing it, separates our youth from our old age.

That's not to say "Satin Rouge" is an apolitical picture. You can't watch it and not be aware of the political implications: In the movie, Lilia (played by Hiyam Abbas) is a 40-ish widow whose face is lovely, if a bit careworn, and whose body has taken on the curvy, ripe-fruit weightiness of middle age. She's devoted to her sullen, rebellious but basically decent teenage daughter Selma (Hend El Fahem) and to keeping their small apartment beyond tidy. Suspecting that her daughter is sneaking off to a nearby cabaret, Lilia sneaks off herself to investigate. Her initial feelings of revulsion turn to curiosity and then to fascination, until one night, along with some of the belly dancers she has befriended at the club, she takes the stage herself. Eventually, she even embarks on an affair with one of the men she meets at the club.

Amari, who lives in Paris but returns home to Tunis often, has said that the picture was attacked by the conservative press in North Africa -- surprisingly, less for its forthrightness about sex than for the way it "desecrated" the image of motherhood.

But in terms of the way Amari treats her middle-aged protagonist, "Satin Rouge" would be unusual even among Western movies about women. Anyone who has picked up a magazine in the past 10 years knows that our culture reveres youth, but the upside is that even without plastic surgery, we're all able to stay younger for much longer than we ever have before, thanks to better healthcare and more awareness of the roles diet and exercise (not to mention plain old youthful thinking) can play.

Strangely enough, though, few filmmakers have figured out how to make interesting movies about middle-aged people. We need fewer wretched comedies about 50-year-olds hanging on for dear life to their sexuality ("Never Again") and more pictures like "Sexy Beast," in which the existence of sex past 40 -- or, more specifically, women's attractiveness past 40 -- was never an issue at all. You simply got it, thanks to the way director Jonathan Glazer and cinematographer Ivan Bird captured the essential beauty of lead actress Amanda Redman, with her gently rolling tummy and luminous, lived-in skin.

Amari (who is just 31) approaches both the story and her lead character with a similarly light touch. When we first see Lilia, she's wearing a frumpy cotton wrapper as she dusts, at least once and sometimes twice, every inch of the family apartment. But there's music playing, and she stops briefly in front of the mirror, where, slowly and almost in spite of herself, she begins to dance. You can barely see her rounded outline beneath that rectangular cotton dress -- she's all circles in a world of squares -- but her slow, tentative movements give us a sense of the heart of the woman beneath.

Later, once Lilia has penetrated the world of the club, she is befriended by the lead dancer, the nearing-50 Folla (Monia Hichri), who's quintessential proof that every country and every culture has its version of the Big Ol' Gal. When Folla dances, the earth shakes: With her breasts front-loaded into a sequined bra and her exposed tummy shimmering with glitter lotion, she's a force of nature with a mighty big glamour quotient. Off-stage, she's loud and likable, and there's an almost flirtatious quality to the way she talks to prim Lilia: Running into her serendipitously at the fabric store, she calls out, "Hello, young lady!" obviously addressing the person Lilia is instead of the culturally approved image she projects.

Don't think I can't hear you all groaning: Few people in their right mind wouldn't be skeptical about a movie that shows a woman's sexual awakening at middle age. But Amari has made a movie about a woman, not an idea. When we first see Lilia dancing in the club, her wildness (she's dancing for herself, not for her audience) is as embarrassing to us as it is to her. But later, as she learns the moves and learns to speak to her audience (they are there to hear what she has to say, after all), her newfound openness is a thing of beauty in itself.

Lilia's hips are what you would kindly call ample, and the skin on her stomach has lost some of its stretch. But there's a loveliness to her body -- and a couldn't-care-less assertiveness in its movements -- that take the movie beyond feminist statement-making. Dancing is a way of reveling in what one's got, and "Satin Rouge" recognizes that revelry is perhaps the purest form of consciousness raising.

"Satin Rouge" doesn't shy away from some surprising complications, particularly the events that unfold after Lilia notices the way one of the cabaret musicians (Maher Kamoun) has been eyeing her. It's important to point out, too, that Amari looks at her story from all angles: If the pouty teenage Selma reminds us how unappreciative children can be of their parents' care and attention, the movie also shows us how tyrannical and downright selfish parental caretaking can be. (An older neighbor, after hearing that Selma has been sick, inquires about how she's feeling only to move on to scolding her for not taking care of herself, turning an ostensibly polite query into a "Think of your poor mother!" diatribe.)

Amari neither makes the men villains nor lets them off the hook: When Lilia first walks into that club in her drab housedress, every man eyes her lasciviously; one of them, edging up to her with moist google eyes, purrs "Hello, beauty! What are you looking for?" It's as if their job is to make her feel dirty and it would be unmanly to let her down.

But Amari's even-handedness always draws us back to Lilia, who is only just now, in middle age, inching her way toward real youthfulness. There's something delightfully girlish about the way she replaces her dowdy handbag with a racy new pocketbook (a slim little python-print number). But "Satin Rouge" is less about a superficial midlife crisis than it is about the need to stay in touch with your own skin, at 18 or 80. The personal is always going to be political; stretch marks are their own kind of map.