Blasted for plans to link the spy program to "America's Most Wanted," John Ashcroft has tapped another private firm to run its volunteer hotline. His most fervent supporter: Joe Lieberman. 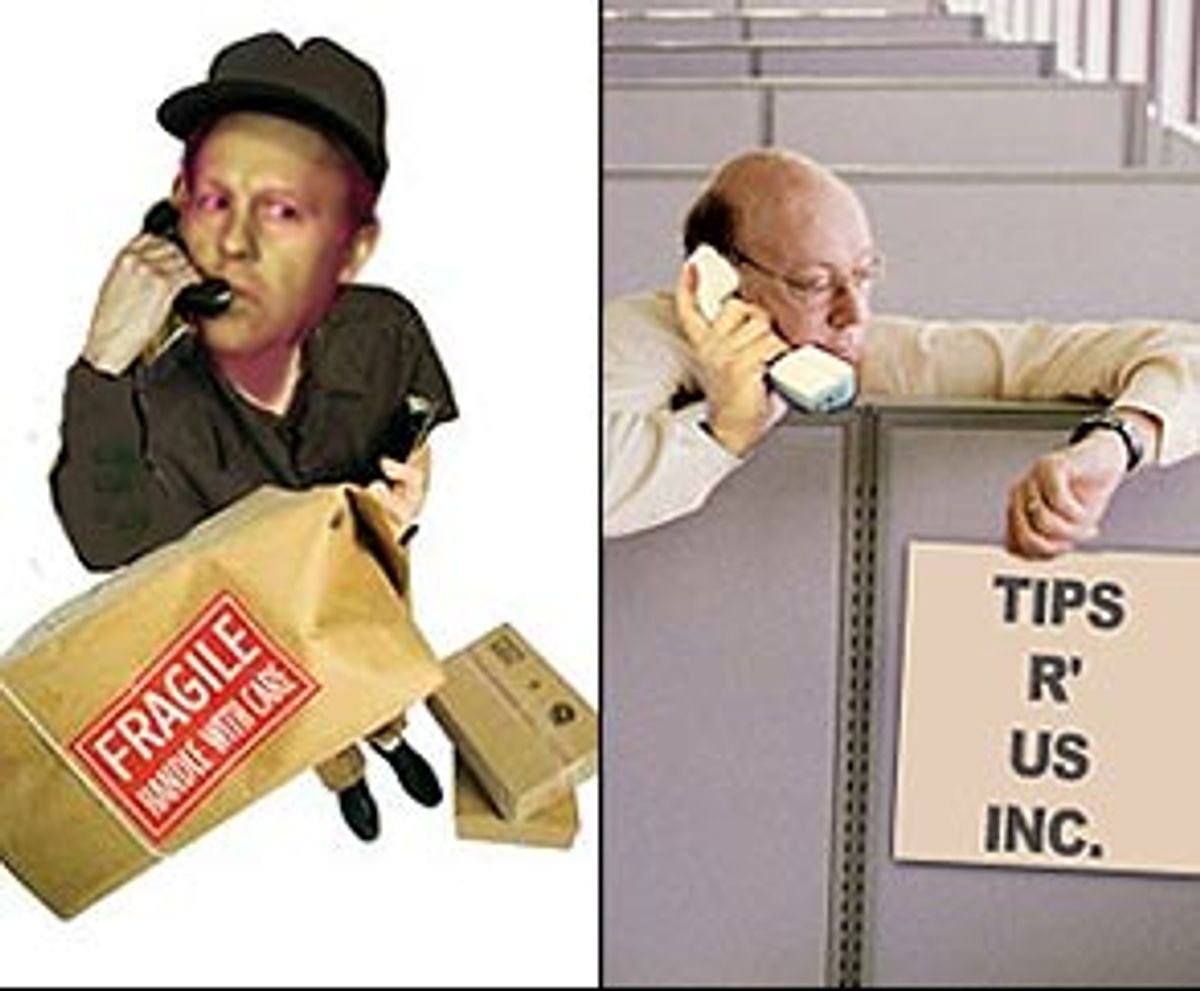 Scarcely two weeks after the Justice Department was found to be referring volunteers in its Operation TIPS domestic-spy program to Fox TV's "America's Most Wanted" crime hotline, Attorney General John Ashcroft is making plans to farm out the TIPS hotline to a different private organization.

The Richmond, Va.-based nonprofit company, called the National White Collar Crime Center, confirmed Wednesday that it is discussing plans with the Justice Department to operate a hotline that would take calls from citizens that the department signs up in its planned Terrorism Information and Prevention System (TIPS) spy program. Civil libertarians are outraged by the plan to privatize the operation. "It's troubling that the Justice Department would go out of its way to try to get around the Fourth Amendment and the Freedom of Information and Privacy Act this way," says John Whitehead, president of the conservative Rutherford Institute.

Meanwhile, a battle is shaping up in Congress over efforts to block funding for the TIPS program entirely. Last month, the House of Representatives passed its version of the Homeland Security bill with a measure added by Majority Leader Dick Armey, R-Texas, that prohibited federal funding for programs that would have American citizens spying on each other. But an effort by Sen. Pat Leahy, D-Vt., to do the same thing with the Senate's version of the bill was stymied by Senate Government Operations Committee Chair Sen. Joe Lieberman, D-Conn.

Lieberman, according to a member of his staff, is in favor of a limited version of Ashcroft's TIPS program, which would only involve recruiting workers in certain industries -- such as trucking, mass transit and shipping -- as citizen spies. "The senator likes the idea of a program limited to certain types of workers," says one staffer.

Rachel King, a congressional lobbyist for the American Civil Liberties Union, says "Lieberman seems to be in communication with Ashcroft because they're both talking about the same kind of limited program."

Word of the Justice Department's new privatization scheme has civil libertarians, already worried about the premise of TIPS, even more concerned about the program.

"It's clearly an end run around the Freedom of Information Act," says Kit Gage, president of the National Coalition to Protect Political Freedom and an executive vice president of the National Lawyers Guild. "It doesn't resolve any of the concerns that have been expressed about TIPS and instead creates dozens of new ones." She notes that a private hotline not run by the federal government would be free of congressional oversight, and would not need to follow federal guidelines regarding the gathering or holding of personal data. (For example, federal investigators are supposed to avoid interfering with free speech or religious practice.) An additional concern would be the sharing of information with other agencies and organizations.

"The attorney general takes an oath to protect the Constitution and here he is doing the opposite," says the Rutherford Institute's Whitehead.

Significantly, the National White Collar Crime Center is a membership organization composed of state and local law-enforcement agencies, making the wide transfer of information gathered by TIPSters that much easier and more likely. Says Bob Levy of the Cato Institute, a libertarian think tank, "This means instead of one databank, there will be 70 -- or 700."

A spokesperson at the Justice Department responsible for fielding questions about TIPS says concerns about the program are overblown. "We don't have any plans for a database," she said. But asked what the department planned to do with taped calls about "suspicious behavior" reported by TIPS volunteers calling into the hotline, she conceded that she didn't know how the material would be handled. As envisioned by the Justice Department, she explained, the TIPS hotline would operate much like local 911 systems, with operators routing TIPSters' calls to "the most appropriate federal, state or local agency."

Asked to explain how it intended to handle operation of the planned TIPS hotline, and the information it collects on people via that hotline, Ronda Ellcessor, a spokeswoman for the National White Collar Crime Center, said bluntly, "We have no information available for the public."

The TIPS program has been under fire almost since it was first announced in January as part of President Bush's "volunteerism initiative" in his State of the Union address. As originally proposed, the program hoped to enlist over 20 million citizen spies who would report on the suspicious behavior of their neighbors. That plan, and a 10-city test involving some 1 million citizen spies set for this month, was scrapped after critics said it resembled the kind of neighborhood spying that for years permeated East Germany and China.

A chastened Ashcroft responded to the criticism by proposing a much more limited TIPS program.

Those independent citizens who had volunteered to join the TIPS program were sent e-mail messages earlier this month by the department saying that they were no longer needed and that the planned hotline number would only be provided "through their employers" to workers in the selected industries. "Unlike other Citizen Corps programs, which invite the participation of the general public, only those who work in the trucking, maritime, shipping, and mass transit industries will be eligible to participate in this information referral service," the mass mailing to TIPS volunteers stated. "General information about the program will continue to be available to the public; however, the TIPS hotline number will only be provided to participating industries."

Even this more limited TIPS plan has critics worried, however, especially because Lieberman has indicated that he supports the Justice Department's more limited plan. Lieberman ignored a request by Leahy to include a measure similar to Armey's in the Senate's version of the Homeland Security Bill, which is being handled by Lieberman's Government Affairs Committee, saying it had been presented to the committee "too late" for consideration.

Leahy intends to introduce his amendment, which would ban funding for tips TIPS altogether, when the bill goes to a vote after the Senate's summer recess. Congressional observers say its prospects for passage are 50-50 at best.

A Leahy spokesman said that reports of the new privatized hotline plan "will raise new questions in the Senate and House while leaving unanswered all the earlier ones about how tip information will be shared and stored."

Leahy has been critical of the Justice Department, saying Ashcroft has been stonewalling Congress in its efforts to learn more about the government's plans for Operation TIPS. "As Congress has moved toward dismantling the program, the Justice Department's response has been not to work systematically with Congress to address concerns about the program," the senator told Salon. "The administration's response has been to backpedal to try to change the program's image. The Senate hearing on this was more than a month ago and we still do not have answers to even basic questions about who would have access to these files and how they would be stored, shared and processed. In the meantime, the FBI and other agencies already receive more information than they have figured out how to handle."

King, the ACLU lobbyist, predicts that Leahy's amendment banning funding for TIPS will have tough sledding in the Senate. "Sen. Lieberman is against it," she explains. She says the best chance for banning TIPS lies in a future Senate-House conference to reconcile the two houses' versions of the Homeland Security Bill. Armey, who is not running for reelection, has vowed to make sure his ban survives that conference. The key question will be how strong Lieberman's support is for Ashcroft's citizen spy scheme.

A major concern about TIPS among civil libertarians is that it would encourage ordinary citizens to snoop on neighbors in ways that legitimate law-enforcement personnel are barred from doing. "For example," says the Rutherford Institute's Whitehead, "a meter reader or a truck driver making a delivery could come into my house and report on me because he saw a book by Nat Hentoff on my shelf. He wouldn't need a warrant to come into my house the way an FBI agent would."

"Of course you need to collect information, and make sure everyone understands their responsibility concerning terrorist threats," says the National Lawyers Guild's Gage. "But this 'Operation Snitch' of Ashcroft's is something very different from that. By its very nature, Operation TIPS is likely to focus on collection of First-Amendment-protected kinds of information: some foreign-looking people criticizing the government, or some dark-skinned people practicing a strange religious rite."

If the TIPS program does get Congress' blessing, it will face a fierce battle in the courts. "Whether by law or by litigation, this end run around the mandate for openness and accountability by the Justice Department cannot be permitted," says New York Civil Liberties Union executive director Donna Lieberman (no relation). "It's a violation of the spirit if not the letter of the law for the Justice Department to seek to avoid accountability by farming the program out to private entities."