Osama bin Laden is alive and well and living in Utah

As the anniversary of Sept. 11 approaches, terror-related urban legends are running rampant. Luckily, Snopes.com is on the case. 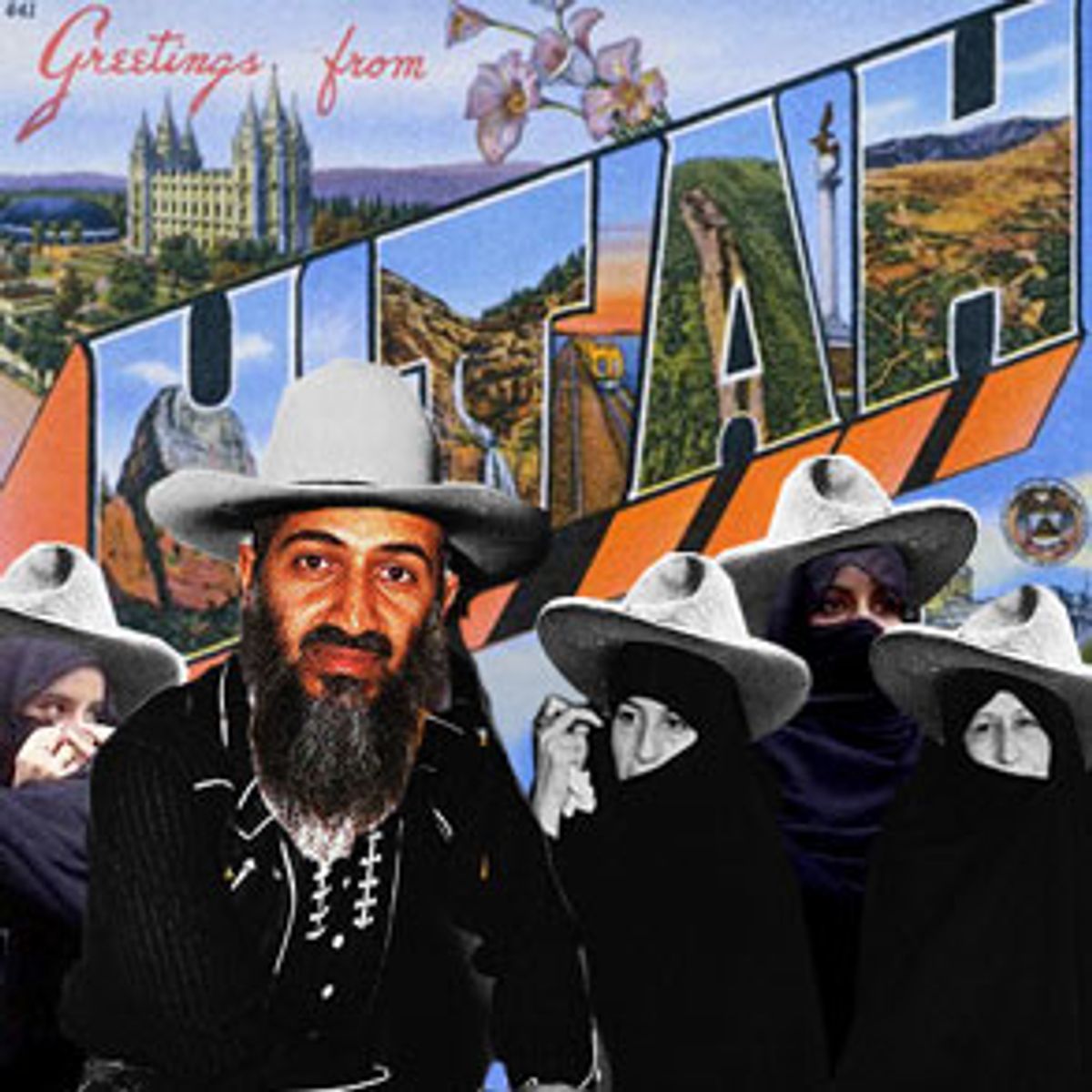 Osama bin Laden lives in Salt Lake City, because his many wives aren't conspicuous there.

And, if you drink Coke after Labor Day, well, I hope your will's up-to-date.

A year after Sept. 11, rumors like these still circulate on the Net, threatening to turn a vigilante mob of telemarketing-phobic Coke boycotters loose on Salt Lake City.

It's all the husband-and-wife team of Barbara and David Mikkelson -- who run Snopes.com, the Urban Legends Reference Pages -- can do to keep pandemonium at bay with their levelheaded debunking of these well-meaning but often goofy warnings and too-good-to-be-true stories.

Late last year, in an interview with Salon, Barbara Mikkelson discussed what the rumor frenzy said about our fragile psyches. Today, even though the constant threat of terror appears to have abated, she explains why the Sept. 11 rumor mill still churns on.

What are the biggest terrorism rumors circulating right now?

A version of the "helped terrorist" tale. The one we're seeing now features Coca-Cola and sometimes Pepsi.

And this is a version of a rumor that we were seeing last fall in cities all over the country: Stay off the bridges on the 12th, don't be in the subways on the 24th, don't go to the boat show, or whatever.

The story itself actually dates back almost two years prior to Sept. 11, where a version of it first appeared in England.

It had to do with an Irish fellow presumed to be IRA warning against Christmas week in a large shopping mall in Britain.

What do you think is the significance of this particular legend? Why does it have staying power and keep morphing?

The major reason is that it makes the threat of terrorism something that can be dealt with and combated. The harsh reality of terrorism is that it is anywhere, anytime and in any manner.

And that is a very frightening thing. It's completely beyond our abilities to deal with.

So rumors like this tend to simplify things down for us. It makes keeping your family safe simply a matter of not drinking Coca-Cola after Labor Day, right? And that is so much easier to deal with than constantly looking about you everywhere you go. And that's one of the reasons such legends have a great appeal: because they take something that is just too large and reduce it down to something that can be handled.

Right now, we're seeing a surge of "slack-tivism" requests. That's the joy of participating in something without doing anything -- slack-activism.

An example: the idea that everyone should turn on their headlights on Sept. 11, as a way of mourning the dead and showing solidarity throughout the land.

How much effort does it take to turn on your headlights, as opposed to going out and buying a flag and actually flying it that day?

Basically, it's an attempt to find some way of recognizing the importance of the day, but at the same time not doing anything that really takes you out of your armchair.

There is a need to mark the day. People are confused as to what they should do or how they should handle it. And this seems to offer a very simple easy solution.

Has there been any gallows humor about Sept. 11?

We've seen some humor that deals with Sept. 11, but very little. It is still very much an at-arm's-length subject in that people are not making the gruesome jokes that they were, say, in the wake of the Challenger disaster.

This is considered far too sacred to make a lot of jokes about.

The one joke that went around that was very popular -- that we saw a resurgence of again this summer -- was the story about a fellow who was supposedly working in the World Trade Center, but instead of going to work that morning he spent the time with his mistress. And finally around about 10:30 in the morning, he turns his cell phone back on, and the phone rings and it's the wife: "Where are you? How are you? Are you OK?" And he says: "What is the matter with you, woman? I'm at the office."

Why is this legend popular?

We've always loved the stories about the adulterers getting caught red-handed. That shows up in a number of our urban legends.

We've seen humor, of course, that belittles Osama bin Laden, like the cave memo that he circulated to his various cave mates.

And then there's the rumor that the reason that he hates Americans is that long ago he'd had an affair with an American girl, and she'd laughed at his small manhood. And what's interesting there is that the same rumor was around in World War II about Hitler and a Jewish prostitute.

It's a simple way of trying to explain, why does this man hate us so much? What could have caused such a hatred? It's also a way of belittling it, of writing it off. Never mind what CNN says about what the depths of the problems in the Middle East are -- it's really just one guy who basically got dissed by a girl and took out his mads on the world.

What are some of the most ridiculous rumors related to Sept. 11 that people have actually believed? Osama Bin Laden is living in Utah?

There are just so many of them that are ridiculous on different levels, like the idea that you couldn't get a taxi at the World Trade Center on that morning. This rumor implies that every member of the Arab-American community knew something was up.

The reason that people grasp onto that legend is that it makes life easier. You don't have to worry about who is a good guy and who is a bad guy anymore, because you can just figure every Arab-American is a part of it.

Terrorists don't have badges or wear uniforms. You can't tell who is a good guy from a bad guy, and that is hugely disquieting. And that's why we see a number of rumors that play upon that theme, because people are trying to confront that sense of unease.

What have been the most popular types of rumors?

There have been three different types.

The first have been rumors of explanation. What happened was so horrifying and so awful that we cannot accept that this could have just happened. It is far more comforting to believe that there were portents and there were signs, and we just missed them.

That's why we see the Nostradamus rumor and the Oliver North rumor. The rumor was that Oliver North had warned us about Osama Bin Laden during the Iran-Contra hearings, and we just didn't listen.

It's so much more comforting to believe that we just missed the warnings than to say there wasn't one.

The second type of rumors and stories we're dealing with are trying to come to terms with what might potentially have happened. Which is why we're dealing with the "helped terrorist" rumors and the disappeared Afghan boyfriend rumor, because these are all attempts to reduce the threat down to something manageable, to something that we can cope with.

It's so much easier to say that keeping my family safe means that I just don't go to the mall on Oct. 31, as opposed to I have to keep looking around me all the time.

The third type of rumors and stuff we've been seeing have to do with people trying to take back a sense of control and having a chance to fight back a bit. And that's where we see the ones about Osama Bin Laden owns Snapple or Citibank; therefore, let's boycott Snapple or Citibank.

People feel powerless because there is no definable enemy standing in front of them. The war in Afghanistan is going on half a world away. People need to feel that they're involved in the fight against terrorism, in a little bit more direct a manner than just vicariously through CNN. They need to feel that they can do something to fight back, because they're trying to reclaim a sense of control, not feeling so helpless, so powerless.

If you can boycott Snapple, you're striking a blow.

Based on the rumors that are circulating right now, what do you think our mood is as this anniversary approaches?

There's an upsurge in patriotic displays because of the anniversary.

But right now it's kind of hard to tell how you're doing in the war against terrorism, because there haven't been any further attacks, but you don't really know what's been thwarted.

So there's an upsurge of rumors like "don't drink Coca-Cola" and things like that. There is still obviously the sense of a lurking threat out there and the need to feel that you're doing something to protect your family.

What have you learned about urban legends since Sept. 11?

They allow us to give voice to the fears and the anxieties we're feeling and to cope with the unthinkable by reducing things down to a level where we can deal with things again. They're our way of taking complex, horrifying large problems and simplifying them down to something that is no longer overwhelming.

To understand the purpose of rumor and gossip in our lives, you'd have to live through a time like this, because otherwise they would just be words in a book.