Ferris Bueller, Carrie Bradshaw and me

I ran into Matthew Broderick and Sarah Jessica Parker and tried to act all hip and cynical. Now I'm really, really sorry.

By Stuart B. Siegel 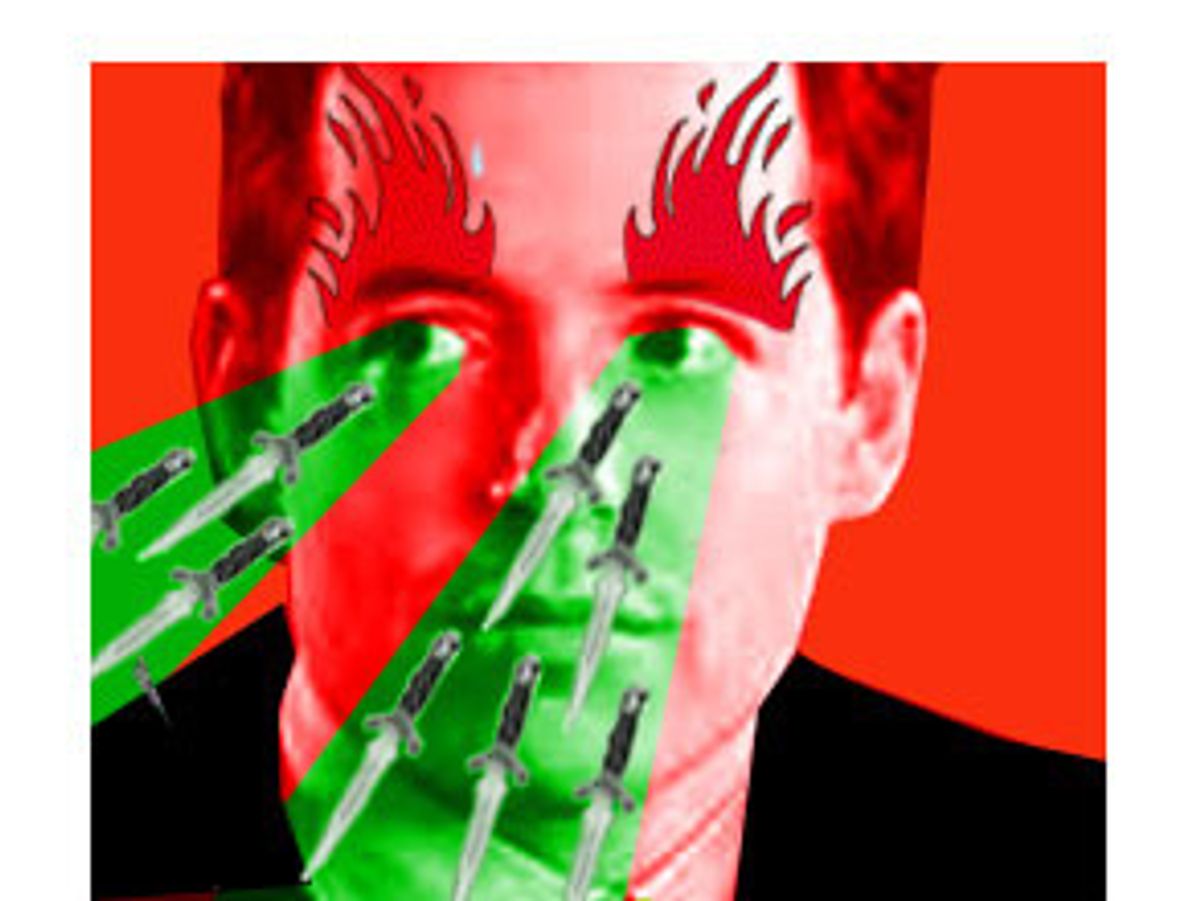 I said something stupid to Matthew Broderick a couple of weeks ago.

I was caught up in an attempt at mildly cynical, hip, deadpan ironic humor, which didn't work, and now I've appeared as a fool before an icon of my generation. I also found a nice Jewish therapist and put a nice Jewish lawyer on retainer that night, so at least I have a cushion upon which to fall back.

A rainy Thursday evening is a decent time for the most popular actress on television to go out with her husband and some friends for a bit of edgy urban comedy; such an evening is equally decent for two Pho-bloated young rabbinical students to do the same, so it was not surprising that we found ourselves in line at the box office together: myself, rabbi-to-be Justin Kerber, Sarah Jessica, Matthew and their two friends, one of whom, I later learned, once had a funny gig on the Comedy Channel with a prosthetic nose.

It was the penultimate performance of the sold-out Sarah Silverman show "Jesus Is Magic." Silverman, an attractive, young, mildly cynical, hip, deadpan ironic comedienne has appeared on, to offer a brief sampling, "Saturday Night Live," "Politically Incorrect" and a show on the Fox network with puppets. "Penultimate" means that the next night was the last show. (It was also Shabbos the next night. Good Shabbos.)

Before the show I bumped into Sarah Silverman, who looks more zaftig on the poster, on the street. She asked if she could sign my breast. The pen I handed her didn't do too well on skin, so all she managed to scratch into my flesh before giving up was a single S. At that point we realized that we have the same initials. Even more fantastic is that her middle name is Bennett as well.

The show was sold out, but Justin Kerber and I had gotten our name on the standby list that afternoon. So we stood around a bit. I had just had a chat about the golden days of MTV with Colin Quinn, and was standing against the wall, hoping that I would get into the show. Colin had tickets. Maybe an "SNL" connection. Sarah Silverman had told me earlier that she couldn't even get tickets for her own friends. So much for the bonds of the flesh, I mused as I rubbed my sore breast.

Suddenly Sarah Jessica Parker and Matthew Broderick walked in front of me, entered the theater and got in line at the box office. She wore a white flowered maternity dress, soft and pretty, and a shawl. Her hair was pulled back. He wore jeans and a T-shirt and a thin moustache. I didn't see her shoes. Mine were Israeli. New York women followed her with their eyes and flushed and blushed and quietly gushed devotional phrases such as, "I love you." I looked at her belly. Huge with child. The Broderick-Parker child.

I followed them into the building and got on line. Rabbi-to-be Justin Kerber followed. Standing behind Matthew, but not too close, I was not exactly overhwelmed or intoxicated by this brush with celebrity -- chatting with Colin Quinn and Sarah Silverman had warmed me up to the simple truth that, even though Dee Snider is the only famous person in Coral Springs, Fla., and even though I am certain that Brad Pitt is far cooler than people assume, famous people are the same size as us, buy pretzels from the same Venezuelan vendor as us, don't smell any better and don't even necessarily shave well. Rather, I was just strangely determined to have Matthew Broderick know that I'm a funny guy. And clever. As clever as the brand of humor we were both willing to pay 30 bucks to see that night.

"You were great in 'Fast Times at Ridgemont High.'"

Wait! Don't crinkle your brow, don't think such retorts. Let Matthew speak your mind for you:

Well, beloved friends, that was the end of me. I made a brief attempt to explain the joke to him: "I know, I just figured you get tired of hearing about 'Ferris Bueller.'" And then Matthew Broderick nodded at me the way a fellow might nod if you had just told him that you like to pee in your own socks, and then he turned away.

Sarah Jessica (the real star of this scene, no doubt -- yes, she's very pretty) didn't hear a word of it. She looked stressed. In the city.

My joke? Just a bit of wink-wink irony, as if to say, "You've probably been thanked for 'Ferris Bueller' a thousand times, so I'll just thank you for a movie you weren't even in, as a sort of acknowledged irony between two clever chaps." But actually, it was more like, "Hi Matthew, I'm stupid -- no, just kidding, but I am tremendously ludicrous and abstruse. And did you know that I like to pee in my own socks?"

Maybe I should have said, "Man, 'War Games' was awesome. That HAL was one tough computer!"

Rabbi-to-be Justin Kerber, who is now my lawyer on a $30 retainer, was more straight with the star:

So now I'm stuck with this moment, this shame. I just wanted to use a bit of irony. You know, a reversal of what is expected, like Sarah Silverman signing my own name on my breast. I told my new doctor, Dr. Craig Blinderman, that my joke was akin to telling Clint Eastwood that "Death Wish 3" was his best. Or even better, thanking Harrison Ford for being the saving grace of "Star Wars Episode I: The Phantom Menace." Dr. Blinderman thought that the Star Wars joke was funny, but didn't like the Broderick one.

After the Matthew Broderick incident, I crossed the lobby to seek out Dr. F. I was beginning to admit the foolishness of my ways to the doctor when the box office fellow arrived and began to admit standby people into the theater. I made it into the show, but I don't think that Dr. F, whose companion was the ex-daughter-in-law of Mia Farrow, got his name called, so he didn't get to hear Sarah Silverman say, "We really have no good reason to make fun of midgets. But we do, because we're not scared of them."

I want to use this moment to apologize sincerely to Matthew Broderick and his stellar wife for the stupid thing I said. It was presumptuous of me to attempt to overturn the entire celebrity-fan dynamic by accosting him with an unprovoked bad joke, and it was cocky of me to assume that he (you, Matthew) would actually be receptive to my tragic efforts at clever intercourse. I hope you can find it in your hearts to let this one go so we can start fresh. If you like, you can both join me and some friends for the next two episodes of Kieslowski's "Decalogue" this Wednesday at the Lincoln Plaza Cinema. Tickets and Raisinets are on me.

A little beef and sympathy.

MORE FROM Stuart B. Siegel