A Harvard professor says science itself proves that such animals as parrots, apes and elephants should be considered persons with legal rights. 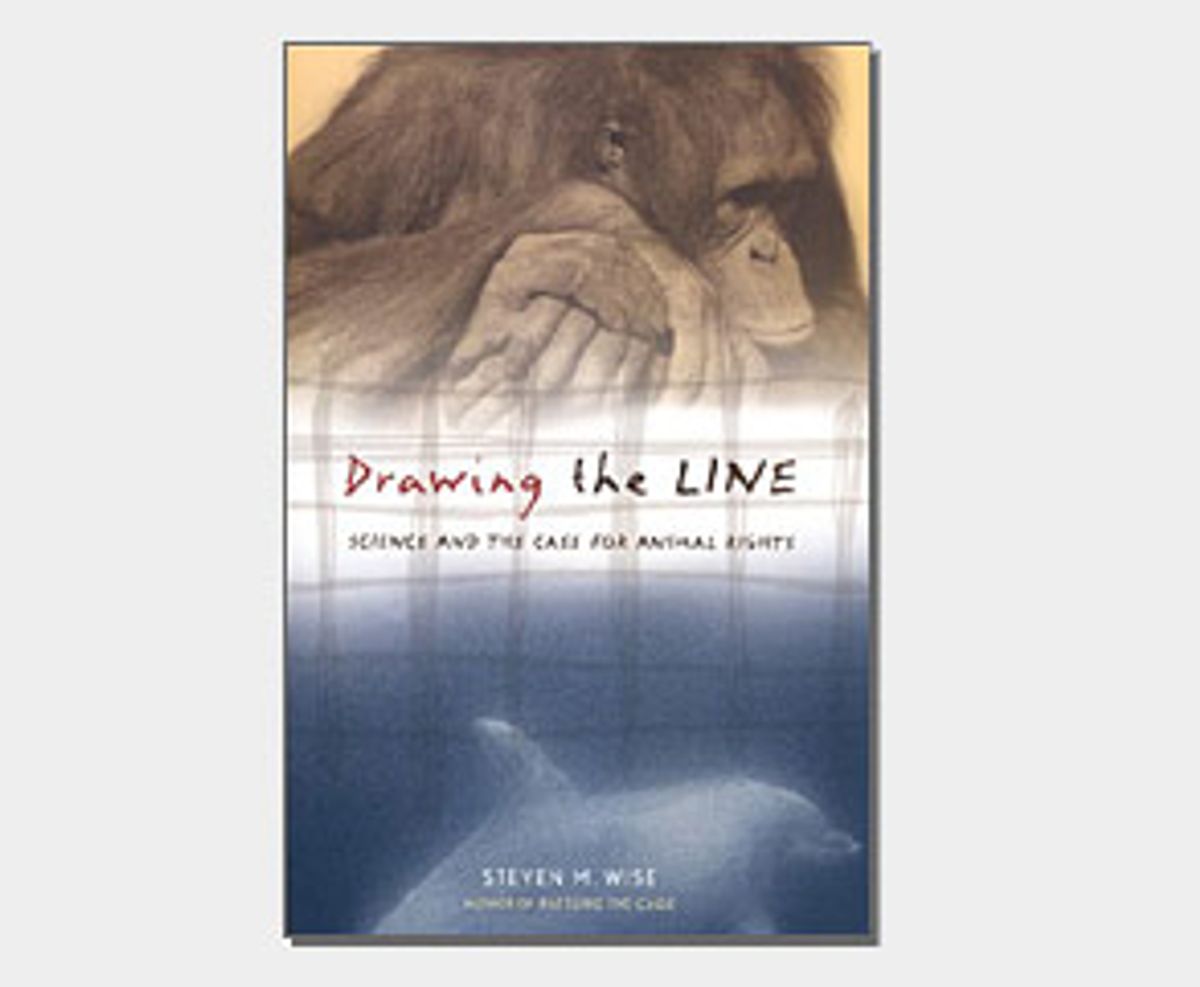 Is a parrot a person? How about a chimpanzee? Or a honeybee? Of course any kid can tell you that they're not. Only people are people. Animals are animals.

But Steven M. Wise says it's not that simple. In "Drawing the Line: Science and the Case for Animal Rights," he argues that science shows that some animals really are people. At least, they're legally entitled to be treated that way.

Wise is a lawyer and well-known animal rights activist who teaches a course on animal rights law at Harvard University. In his previous book, "Rattling the Cage," he argued that chimpanzees and bonobos deserve protection as legal persons. Here he extends the argument, and asks whether seven different animals -- gorillas, orangutans, parrots, dolphins, elephants, dogs and honeybees -- are entitled to legal rights.

If your high school biology classes were anything like mine, you were taught that animals are instinct-driven automatons. If we think we see intelligence, reasoning, even emotion in animals, then we're anthropomorphizing. But Wise details scientific work that shows some animals' minds really do seem to work like our own. He thinks he can use these studies, combined with the legal principle of equality, as a crowbar to pry animal rights out of existing law.

So what makes a person? Wise quotes legal scholars and philosophers to make the case that the defining aspect of a person is autonomy; a person can desire, reason and act. Wise argues that many animals have what he calls "practical autonomy," a quality that makes them much more like people than they are like things. The three-part test for practical autonomy he devises asks whether the animal 1) can desire something; 2) can intentionally act to fulfill those desires; and 3) knows that it's he, the animal, who is doing the desiring and the acting.

Seem simple? It's not. Concepts like intention and self-consciousness are maddeningly difficult to define, much less detect. Wise asks whether even his 4-year-old son, Christopher, has actually achieved the status of person. Does he have intentions and act on them? Does he have a sense of self? The kid passes, but it's closer than you'd expect. If Christopher had been 1 year old when Wise asked the question, he might have been judged less worthy of personhood than an adult parrot.

Psychologists and animal behaviorists use a number of tests to try to detect various kinds of mental activity (and then argue among themselves about what the results mean). For instance, does the child or animal recognize itself in the mirror? Kids do this from about the age of 6 months. All of the adult apes are good at it, but it's not as clear whether other animals recognize themselves.

Another basic test is for "object-permanence" -- does the child or chimp understand that an object placed under a cup still exists even when it's out of sight? Kids as young as 4 months may do this. So does Alex, an African gray parrot, who isn't fooled when a hidden nut is transferred from one container to another.

Does the subject possess a "theory of mind" -- in other words, does it seem to understand that other creatures have their own points of view and mental processes? It won't surprise dog owners that dogs are good at this one. A dog playing fetch with a human who intentionally turns his back will put the ball down in front of the person. The dog seems to understand that the human has to see the ball before he'll throw it.

At the summit is abstract symbol manipulation, which in its fullest form results in language. Wise details the famous case of Koko, the gorilla who knows a thousand words in sign language and seems to use them in a complex way. Even Alex the parrot, with a vocabulary of about a hundred words, is remarkably sophisticated -- for instance, he seems to understand the abstract concepts of color and shape.

In the end, Wise weighs the test results and places the animals on a continuum from 0.0 (mere "stimulus-response machines") to 1.0, full autonomy. Anything with a score above .70, he thinks, should be treated as a legal person with at least some rights.

Honeybees rank the lowest, but even Wise is surprised that they come in at a respectable .59, because of their ability to communicate with one another. Dogs don't quite sneak into personhood, just missing at .68, in part because formal intelligence studies of dogs are rare. But, in ascending order, elephants, parrots, dolphins, orangutans, gorillas and bonobos all make the cut.

But what rights, exactly, should these animals have? Suppose new scientific studies nudge the family dog into personhood. Would it be wrong to chain him up outside when he'd rather run free? To feed him dry food when he prefers canned? To neuter him? Would it be legal to "own" a dog at all? Here, Wise gets a little coy. He admits that asking for too many rights for too many animals all at once is bad strategy. At present, he confines himself to saying that animals with rights shouldn't be captured, confined, killed or made to suffer.

Wise is a pragmatist, and he takes a relatively narrow, legalistic route because he thinks it's his best shot at advancing the cause of animal rights. He agrees in principle with critics who argue that animals should be granted rights based on their capacity to suffer. "But the capacity to suffer appears irrelevant to common-law judges in their consideration of who is entitled to basic rights ... And so I present a legal, and not a philosophical, argument for the dignity rights of non-human animals."

I wonder, though, if it's not the philosophical argument that will carry the most weight in the end. It seems unlikely that many judges will extend personhood rights to animals based on these arguments. More likely, they'll stick to the old, comfortable formulation: People are people and animals are things. (They'll have plenty of wiggle room, once opposing expert witnesses detail the scientific uncertainty behind Wise's evidence.)

Throughout "Drawing the Line," Wise compares the situation of non-human animals to that of slaves before emancipation. Slave owners and others stood to lose greatly if slaves were freed, and a tremendous amount of rationalization went into justifying slavery. Today, we live in a society that depends on the use of animals as things, and Wise thinks we make similar rationalizations.

But it was not legal argument that eventually freed the slaves in the United States. It was a complicated and difficult political decision, driven in part by the belief of enough people that slavery was "philosophically" wrong.

Wise's accounts of animals' mental abilities are fascinating and thought-provoking. But in the end, it wasn't their relative autonomy scores that swung my sympathies. It was the description of Koko making a joke; of a mother elephant involving her youngster in a game so she could complete a task. It was the account of Alex, the parrot, left at the vet for surgery, calling after her keeper, "Come here. I love you. I'm sorry. I want to go back."

Call me an animal lover, call me a shameless anthropomorphizer. But I'm most convinced by the animal rights movement when I'm made to consider that animals can suffer and feel emotion. I think most people are the same.

Only if and when enough people decide that it's morally -- "philosophically" -- wrong to treat animals the way we do, and then translate those beliefs into political action, will there be hope for the sort of sweeping change Wise advocates.

Kurt Kleiner is a correspondent for New Scientist magazine and lives in Toronto.